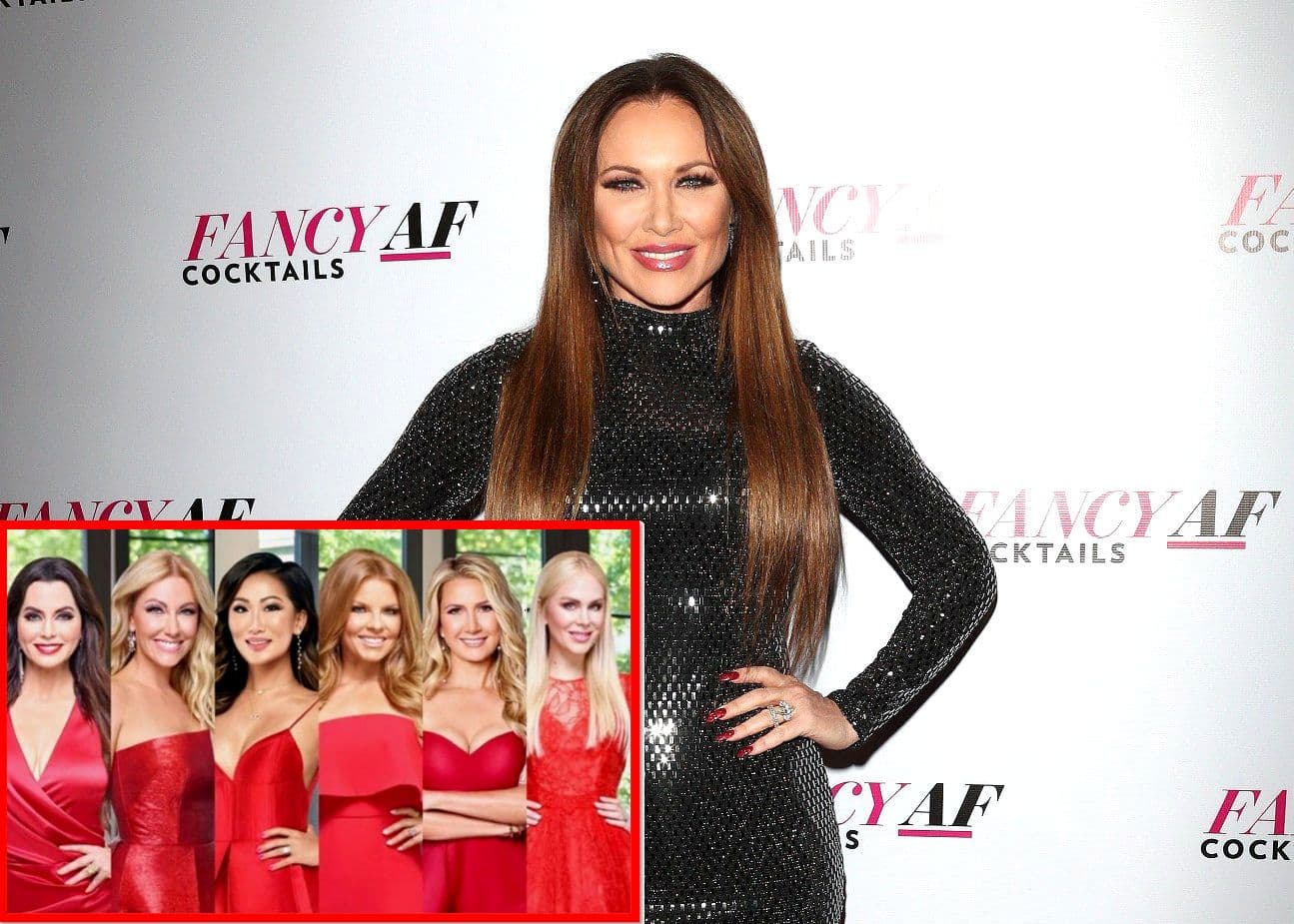 LeeAnne Locken released a series of statements after learning The Real Housewives of Dallas would not be returning to Bravo for a sixth season on Tuesday, and she also had to deny claims that she was joyful over the news.

As other women of the show shared departure statements on their Instagram pages, LeeAnne first took to her Instagram page as the news was making its rounds to share a video.

“When you hear a rumor and feel like it’s your BIRTHDAY,” the former RHOD star captioned the video clip of her looking shocked on her Instagram Story as Pharrell Williams’ song, “Happy,” played in the background. 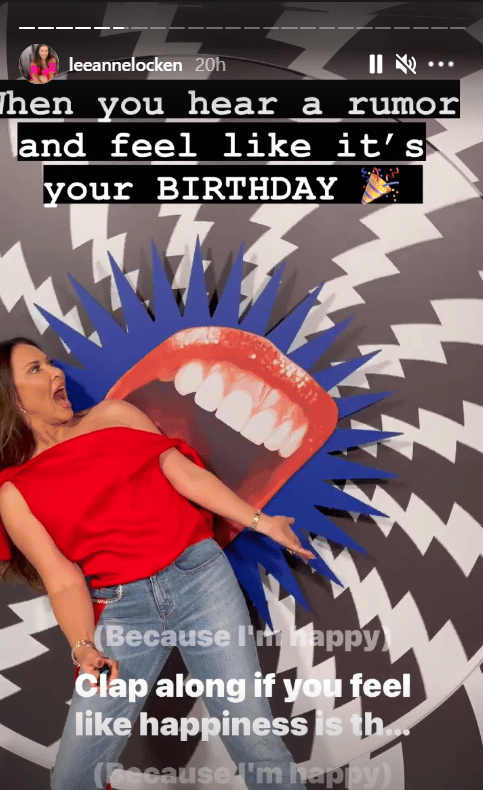 Later, LeeAnne took to her Instagram Stories again to deny she was gloating over the RHOD cancellation news, and she claimed she was simply celebrating a rumor of her husband getting his own show.

She also took to Twitter, where she said she was “grateful” for the four seasons she spent on the Bravo reality show before confirming she has something new “in the works.”

“I’m GRATEFUL I got to share 2 of the BEST days of my life with those who supported & loved me! I am just GRATEFUL!” LeeAnne tweeted on August 17.

I'm GRATEFUL I got to share 2 of the BEST days of my life with those who supported & loved me! I am just GRATEFUL! ???? pic.twitter.com/evhRw1ubHw

Following the post, LeeAnne responded to a couple of fans who shared their thoughts.

“Tell [D’Andra Simmons] she couldn’t carry show without you,” one person wrote.

“I’ll leave that up to someone else!” LeeAnne replied. 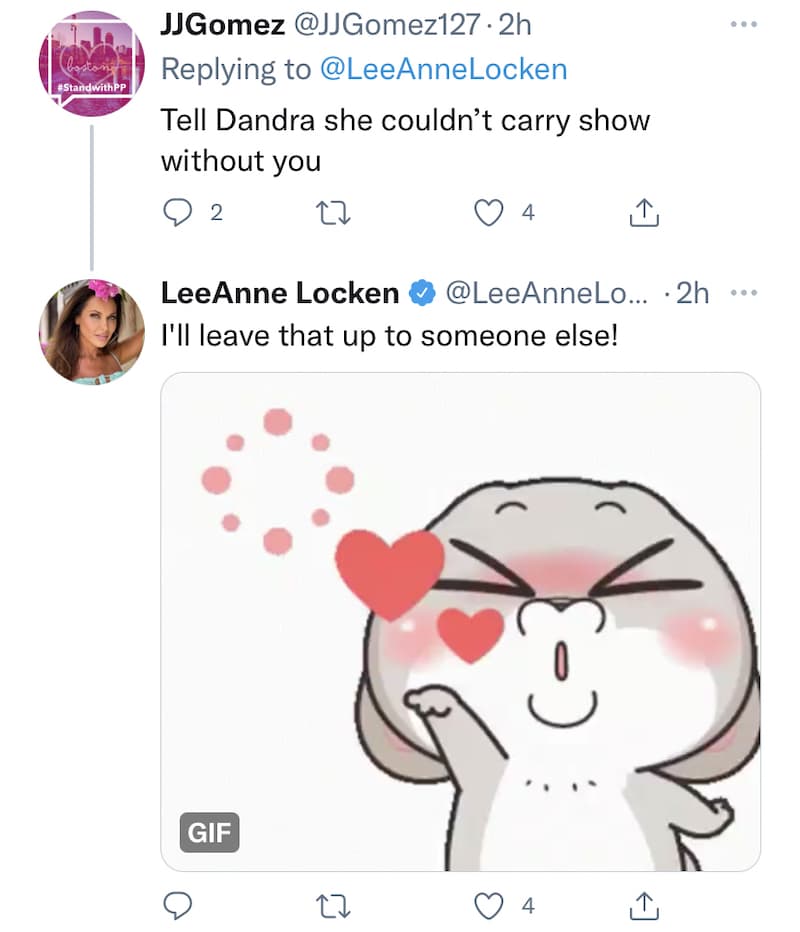 “Love you queen! I guarantee this ain’t the last we see of you! I am excited to see that you grace us with next!” wrote another fan.

“It’s in the works and I am excited!” LeeAnne confirmed. “Plus, my husband starts shooting his new tv show Thursday!” 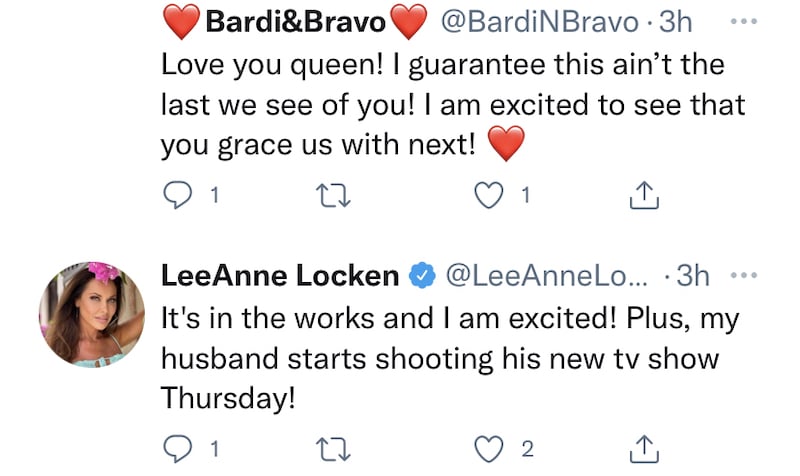 Meanwhile, on Instagram, several members of the RHOD season five cast spoke out.

“My sweet friends, it is no secret that I count my blessings each and every day. I do not take for granted my wonderful family, precious friends and acquaintances. Five years ago I was blessed with the most amazing opportunity to join the Real Housewives of Dallas franchise. I was also blessed with working with my best friend, [Brandi Redmond]! For the rest of my life, I will treasure the memories we shared and your contribution to my life,” wrote Stephanie Hollman, an OG of the show.

“I have met so many outstanding people along the way. I feel like I do not have the words to clearly express my appreciation and love to each and every one of you. The time you took out of your lives to spread kindness and love has not gone unnoticed. From the bottom of my heart, I sincerely say ‘Thank You’ for your kind and supportive words,” she continued. “’YOU’ made the journey of self discovery sweet. When life felt overwhelming and dark, it was ‘YOU’ who helped me get through it. When I felt discouraged, sad or dissatisfied, your comments truly kept me going. Please know that I never took your kindness for granted. I consider myself lucky to have such amazing and beautiful people in my life. As I move forward, I look forward to spending more time with my sweet boys and focusing on my husband, family and foundation. Huge hugs to [Bravo, Andy Cohen] and [Goodbye Pictures]. Each of you have consistently treated me well and like family. I will always hold you close to my heart. I am blessed to move forward with beautiful memories and many wonderful friends.”

“I would like to thank all of the fans of [RHOD], and specifically everyone who has supported me and my family the last 4 years on this incredible journey,” she began. “I am grateful to [Bravo, Andy Cohen] and [Goodbye Pictures] for giving me a platform to share my life and the stories that have fostered my character, my resilience and ultimately my zest for life. I have learned and grown so much from watching myself on TV, and being able to see my victories as well as my mistakes, while learning from each twist and turn. The most important lesson I have learned is authenticity speaks for itself, on camera and off.”

Her full statement can be seen below.

Kameron Westcott, who also joined RHOD during its second season, said she was “sad” to see Bravo removing the show from its lineup.

“It is a sad day to see this chapter of The Real Housewives of Dallas close but also a wonderful day to sit back and remember all the amazing moments we had together as a group!” she shared. “These ladies have become sisters to me over the past [four] years and we’ve gone through so much together.”

“Some of my most favorite memories in life will be with these ladies and beyond thankful for the journey we all shared together!! We’ve cried, we’ve laughed… we lived life to the fullest and cheers to many more fun times!!” Kameron concluded.

See the full statement below:

Kary Brittingham, who appeared on the show’s fourth and fifth seasons, posted a shorter statement to her Instagram page.

It read, “Thank you so much to everyone that has supported me during my adventure on [RHOD] it has been such an amazing experience and I have so many memories and an incredible bond with my sorority sisters… When one door closes other ones open! Excited for my future and so thankful for my time filming RHOD!”

Cary Deuber, who appeared on the first three seasons of RHOD, said Bravo’s cancellation of the series was the “end of an era” before teasing her return to television.

“Thank you to those who have supported me over the years on [RHOD and Bravo] for highlighting beautiful Dallas! But as they say… ‘when one door closes, another opens,'” she shared. “Stay tuned, this isn’t the last y’all will see from me.”

While Tiffany Hendra, who appeared in a full-time role on the series’ first season, has not yet shared a statement of her own, she did retweet a telling message from a Real Housewives of New York City fan page.

“I’m sad about [RHOD] ending. I’ve always found it to be somewhat of a dark horse. The last two seasons have had real issues but I was hopeful that this rumored cast change would help. Anyway, rest easy old friend, we will maybe meet again,” the message stated.

I’m sad about #RHOD ending. I’ve always found it to be somewhat of a dark horse. The last two seasons have had real issues but I was hopeful that this rumored cast change would help. Anyway, rest easy old friend, we will maybe meet again. pic.twitter.com/stydHdftuq

The Real Housewives of Dallas premiered on April 11, 2016.