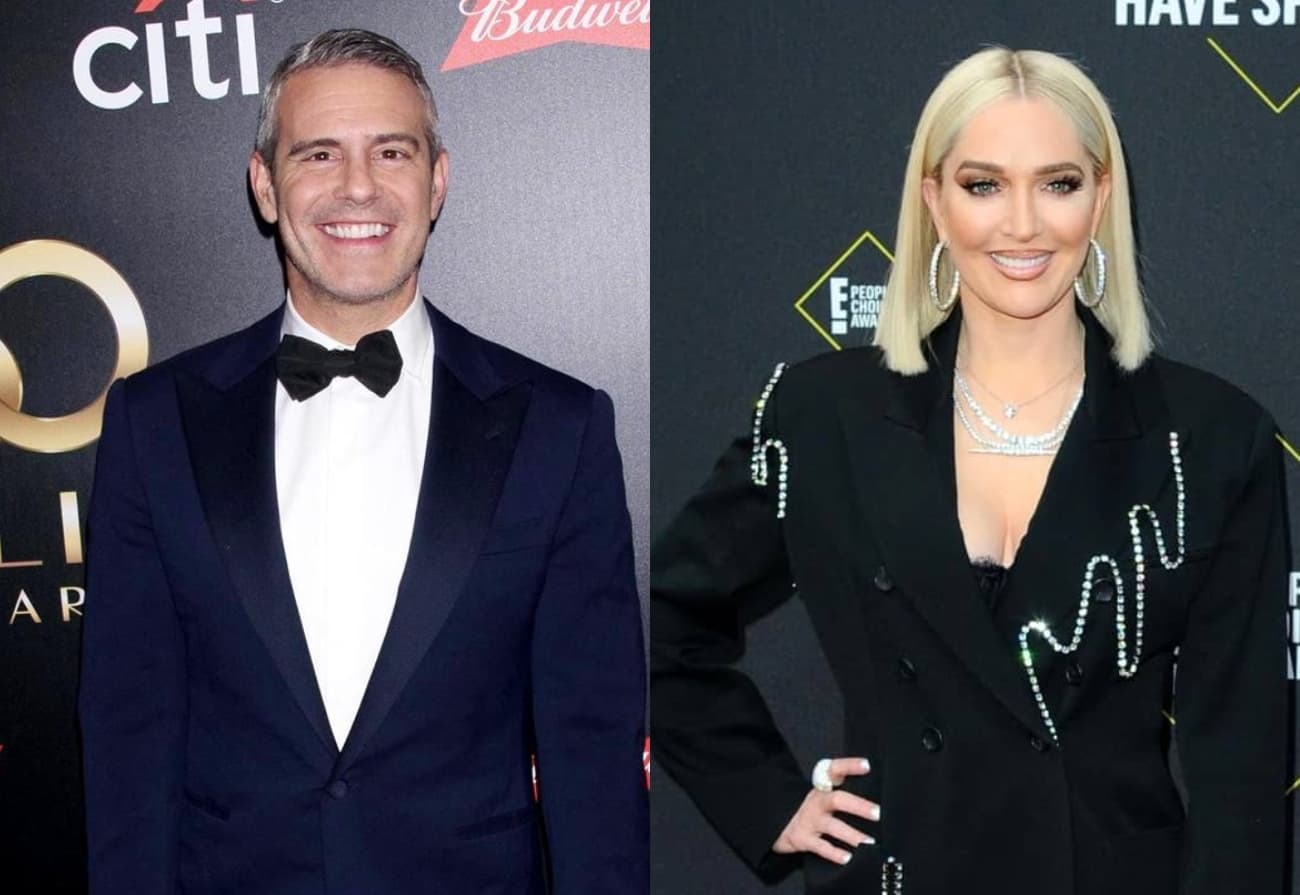 On Monday, Andy revealed on his radio show that he asked Erika “everything” at the September 10 taping amid allegations that she’s helping her estranged husband, Thomas Girardi, hide stolen assets he allegedly embezzled from his former clients, including orphans and widows. Following his remarks, a source confirmed the Watch What Happens Live host “went hard” on Erika, and now a separate insider is claiming he did so at the network’s request.

“Andy didn’t go easy on Erika during the taping,” the source told The Sun on Tuesday. “The network expects this to be one of the highest rated reunions so they encouraged Andy to ‘go there’ with the questions without exposing the show or Erika to any more legal issues.”

Furthermore, the source claims Bravo concocted a strategic plan where they required Andy to ask the most difficult questions right out of the gate just in case the Pretty Mess author decided to bolt.

“There is a lot to cover this year so Erika’s story took center stage before the other storylines were addressed,” the insider added. “The plan was to shoot the most difficult questions first so they had the footage even if Erika decided to leave.”

Nevertheless, Andy’s confirmed that there were no “walk-offs” this year, so it seems she stuck around despite being the center of the drama. And though she reportedly “felt good” about the answers she provided following the interrogating questions, that doesn’t necessarily mean she was pleased with Andy or her co-stars according to the insider.

“There were several clashes and Erika left the reunion unhappy because she felt attacked by the line of questioning,” the source explained.

As for the topics the singer was forced to address throughout the day, Andy said he inquired about Thomas’ alleged mistresses, the missing money, the $25 million lawsuit Erika’s facing, and Thomas’ dementia diagnosis. In addition to the topics already mentioned, Andy shared that he “absolutely” had questions about the alleged “orphans and widows” as well.

Prior to the taping, Erika reportedly spent a great deal of time preparing to take on Andy and her co-stars, including her longtime pal, Kyle Richards.

“Erika’s so upset with her costars watching the show back because they backstab her behind her back,” a source previously told the outlet. “She’s most furious with Kyle. She feels Kyle was the most two-faced to her and their friendship won’t be the same.”

Meanwhile, as Erika continues to remain active on social media, as well as feud with the attorney hired to investigate her in Thomas’ bankruptcy case, she seemingly agreed with an interesting sentiment earlier this week.

After a fan called out Erika’s “haters,” along with attorney Ronald Richards via Twitter, while comparing the “XXpen$ive” singer to Real Housewives of Salt Lake City star Jen Shah’s husband, Erika “liked” the tweet.

“I don’t see Ronald Richards or any of you haters harass Coach Shah even [though] he’s literally in the same situation as Erika,” the person wrote before Erika smashed the heart button. 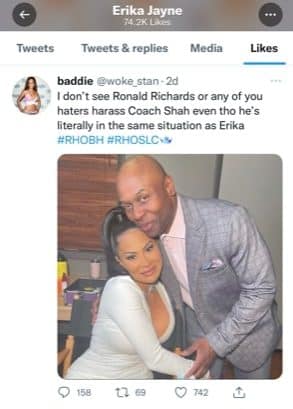 As fans well know, Jen was arrested in March and charged with two counts of fraud after allegedly running a decade-long telemarketing scheme that targeted vulnerable and elderly victims. However, Sharrieff has not been charged with anything or even mentioned by the prosecutors handling the case.

Erika seemingly believes she’s in the same boat as the respected coach despite being named in several lawsuits, including a $25 million suit for allegedly fraudulently accepting millions from Thomas’ law firm. She’s also been accused of filing a “sham” divorce from Thomas in an attempt to help the disbarred attorney hide alleged stolen assets.