Mia Thornton Suggests Candiace Should Be Fired From RHOP and Makes Sexually Suggestive Comment About Chris Bassett After Candiace Slammed Her as a ‘Handsome Bully’ in Ugly Twitter War, See Chris’ Response 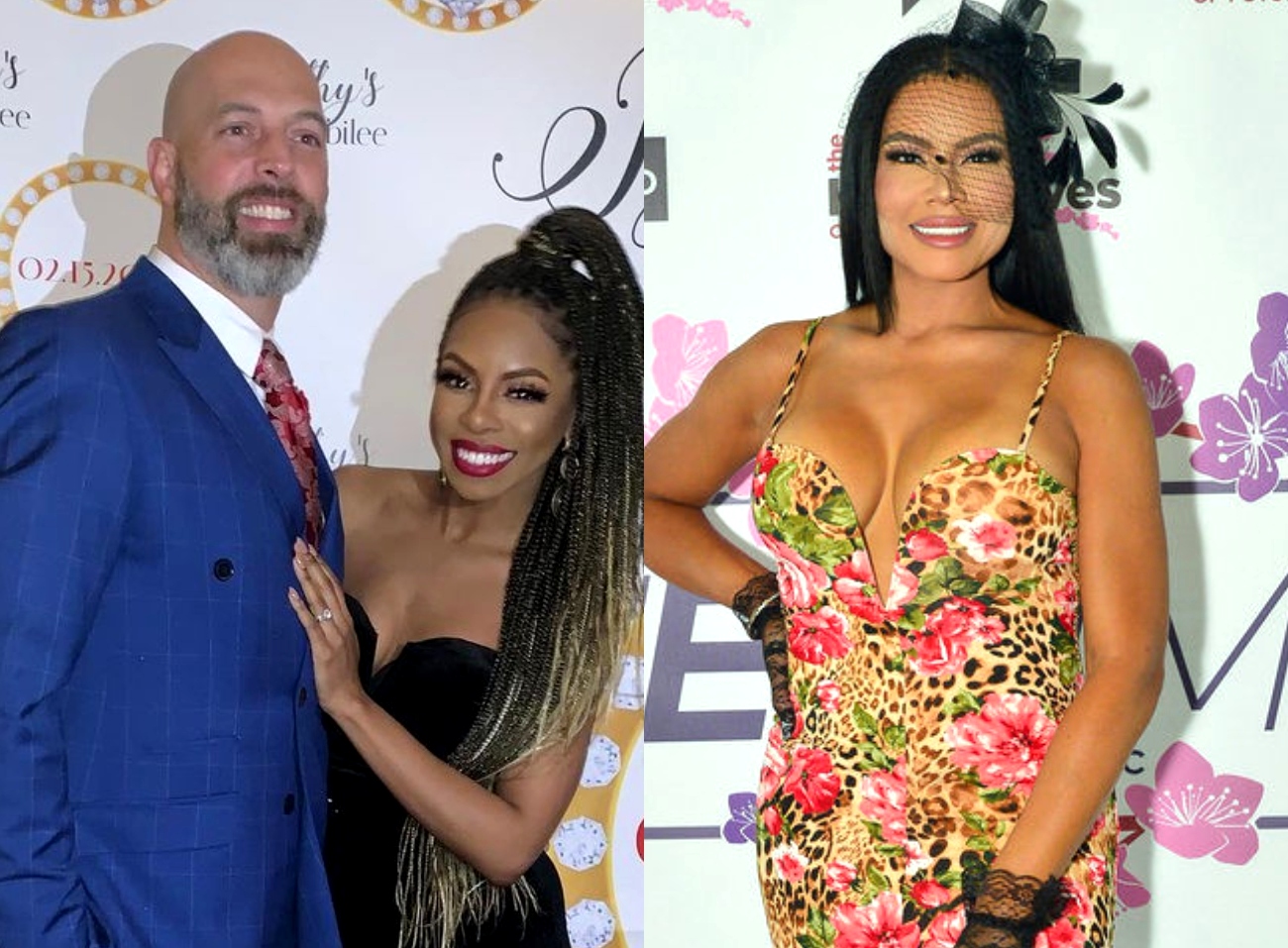 Mia Thornton is feuding with Candiace Dillard Bassett and Chris Bassett after questioning his role as Candiace’s manager on Real Housewives of Potomac, and the newbie also agrees with a fan suggesting Candiace should be fired.

Viewers got a glimpse into the making of Candiace’s “Drive Back” video on the September 19 episode, and it wasn’t exactly a smooth shoot. In fact, Chris, who serves as Candiace’s “husbandger,” seemingly dropped the ball, failing to deliver the luxury cars she was expecting.

As a result, both Mia and Candiace’s mom, Dorothy Dillard, had a lot to say about whether Chris serving as Candiace’s manager is a healthy choice.

Following the episode, a fan took to Twitter to praise Mia while slamming both Robyn Dixon and Candiace, and Mia took the opportunity to shade her co-star and her husband even more.

“[Robyn] is NOT NASTY! She’s R.E.A.L now [Candiace] on the other hand. I’m good. [Is Chris getting paid?]. NAH, Ms. Dorthy confirm,” she responded before adding an “unemployment” hashtag in reference to Chris.

Of course, it didn’t take long for Candiace to clap back as she threatened to light the newbie up if she continues to speak about Chirs.

“Now, I have specifically made it a point to ignore your handsome *ss all season. You claim I’m ‘irrelevant’ but can’t seem to keep my name out of your mouth,” she tweeted. “Don’t pull that victim/bully b*llsh*t when I light your *ss up again. DO keep my husbands name out of your mouth though.” 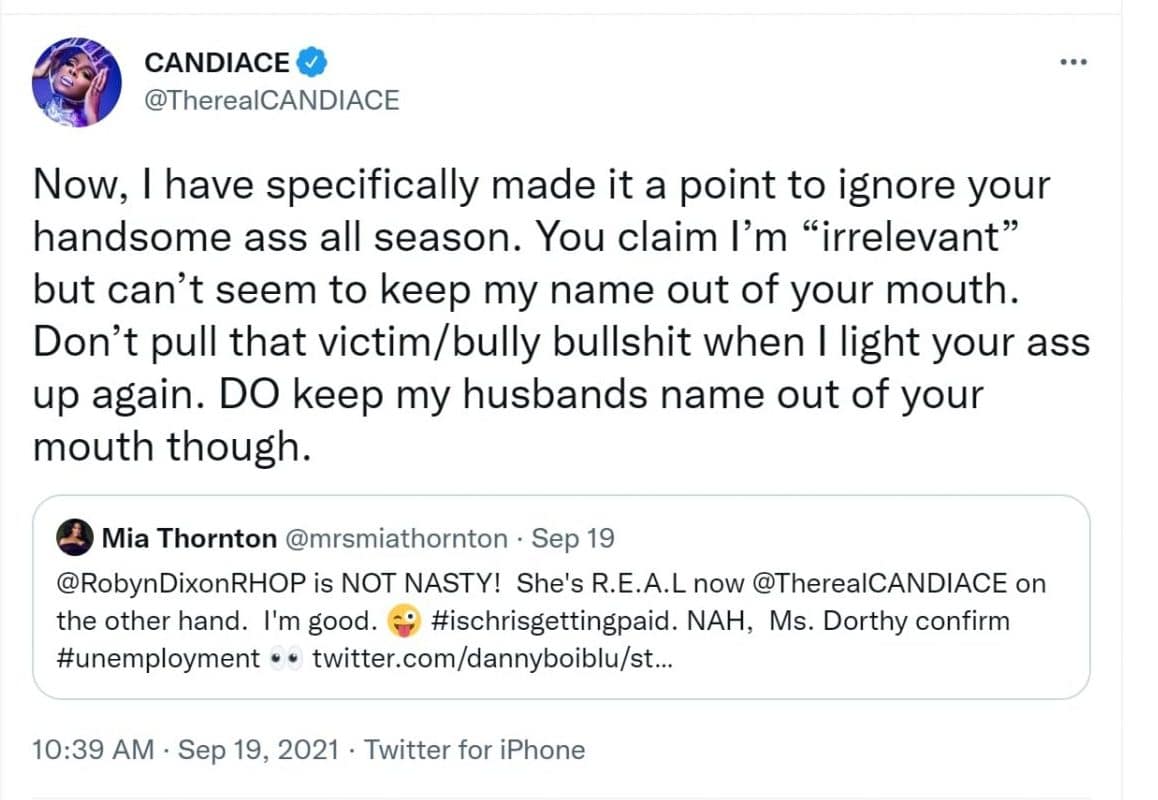 Mia wasn’t about to let the former pageant queen have the last word, tweeting, “You’d be mad if you found out your husband was tossing my salad in the kitchen,” along with a “sous chef” hashtag.

That’s when Chris got in on the action, letting Mia know that her lighter skin tone isn’t really his cup of tea.

“I mean since I’m so integral this morning and on everyone’s mind and tweets…not really my type, I prefer that au natruale dark chocolate type a woman,” he wrote.

Mia fired back, “Oh, [Chris], sorry babe. I was referring to a situation of a guy I met at [Myron Mixon’s Pit Master] BBQ back in the day. Not you boo, I don’t think.” 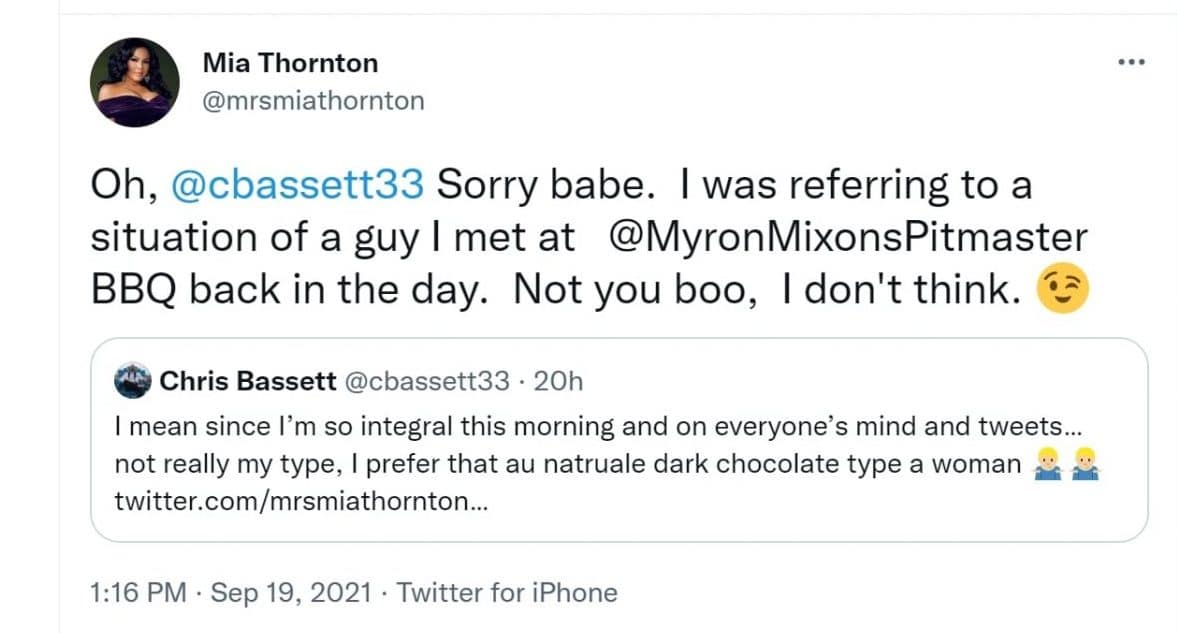 But Mia wasn’t finished just yet as she shared a comment from a fan who believes Candiace should be fired for her controversial comments and behavior.

“Between her petulant child personality, body-shaming, anti-homosexual and anti-trans comments, she needs to be fired by [Bravo],” the fan wrote before tagging Andy Cohen.

Mia responded, “AGREED. I won’t be seen in the same room as her for sure. It’s not cute and offensive to the masses. Wrong Game. [LGBTQ] community I STAN.”

She reshared the exchange via Twitter, adding, “Not my show, not my game. I pay Chess.” She then included a “checkmate” hashtag. 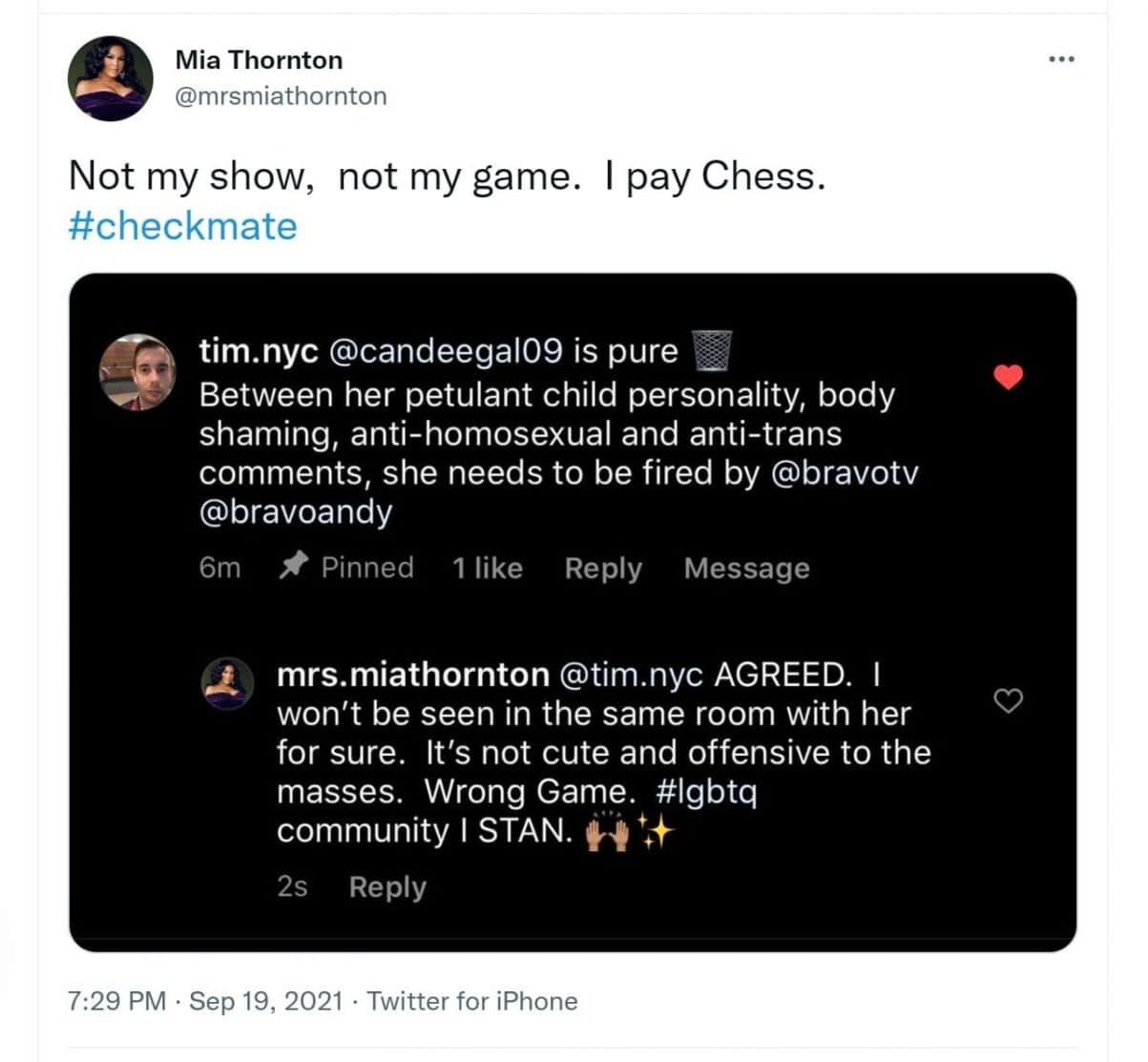