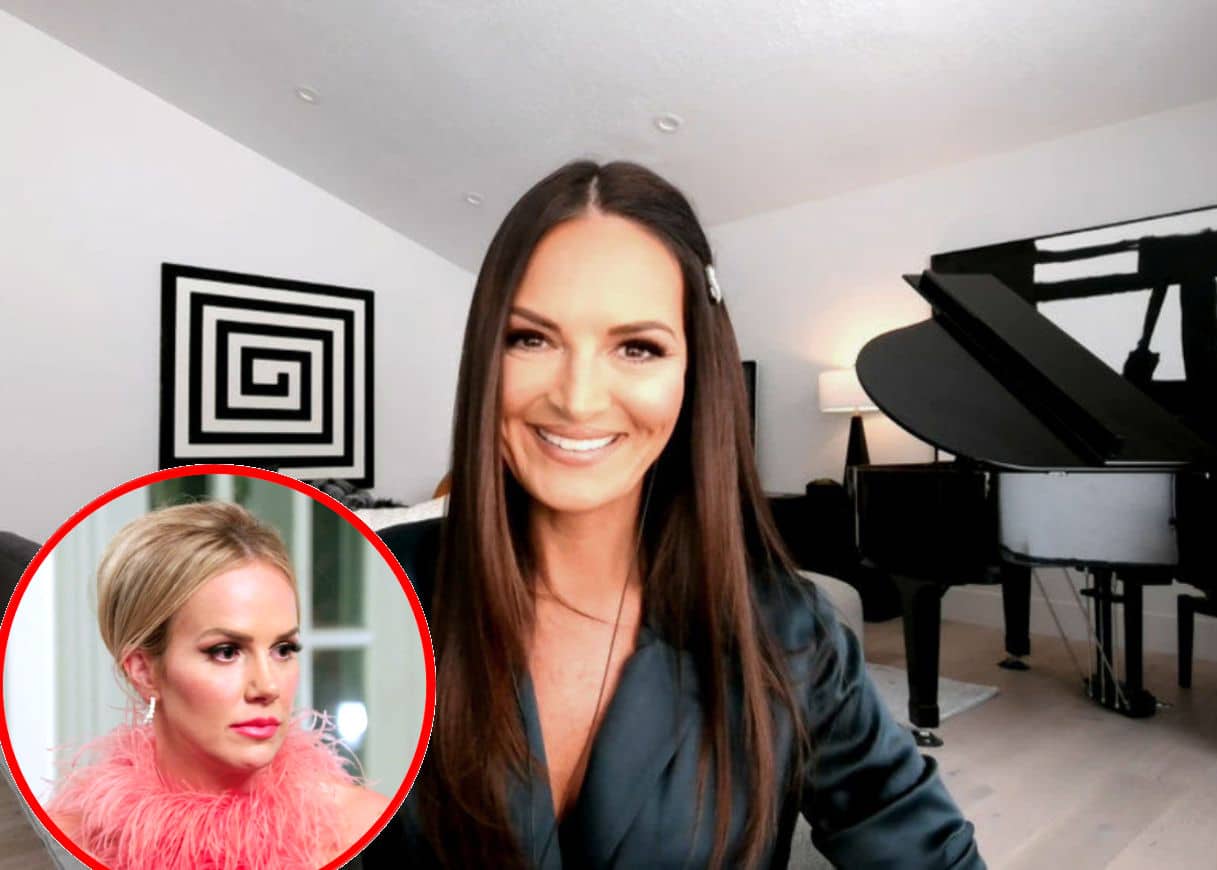 Lisa Barlow was blamed for sabotaging Angie Harrington‘s event during Sunday’s episode of The Real Housewives of Salt Lake City, but according to a series of leaked text messages — and the caterer herself — she wasn’t to blame.

Days after Whitney Rose suggested the caterer of Angie’s event, Aubrey Niccoli, a friend of Lisa’s, canceled plans to feed Angie’s guests because Lisa was upset about Angie’s newfound friendship with Whitney, who Angie had recently discovered is her cousin, messages sent between Angie and an RHOSLC producer were shared as Aubrey spoke out.

“This is the text Angie (RHOSLC) received from the caterer ….. Dina is from production… so it seems it wasn’t Lisa’s fault after all….so Angie wanted free catering and production wasn’t going in that direction,” Cocktails and Gossip explained to readers on Instagram on October 5.

In a message sent from Aubrey to Angie, the caterer wrote, “Hey, Yes, they told us. Marco and I spoke with Dina last night about everything. But ultimately this doesn’t seem like the right fit for us based on what she said. It’ll be just like last year when we did [Jen Shah‘s] party. Our catering company wasn’t even mentioned… And our partner wants us to promote our restaurant group rather than private catering. We have been asked to film at the restaurant by Lisa and Jen’s assistant so that’s the direction we have to go in. I’m so sorry to do this but we can’t do your event.”

In response, Angie told Aubrey, “I’m sorry to hear they said they won’t feature you. What a bummer. I understand.”

As fans will recall, it was noted that Lisa’s name was mentioned in the text but suggested that the manner in which it was was far more scandalous. 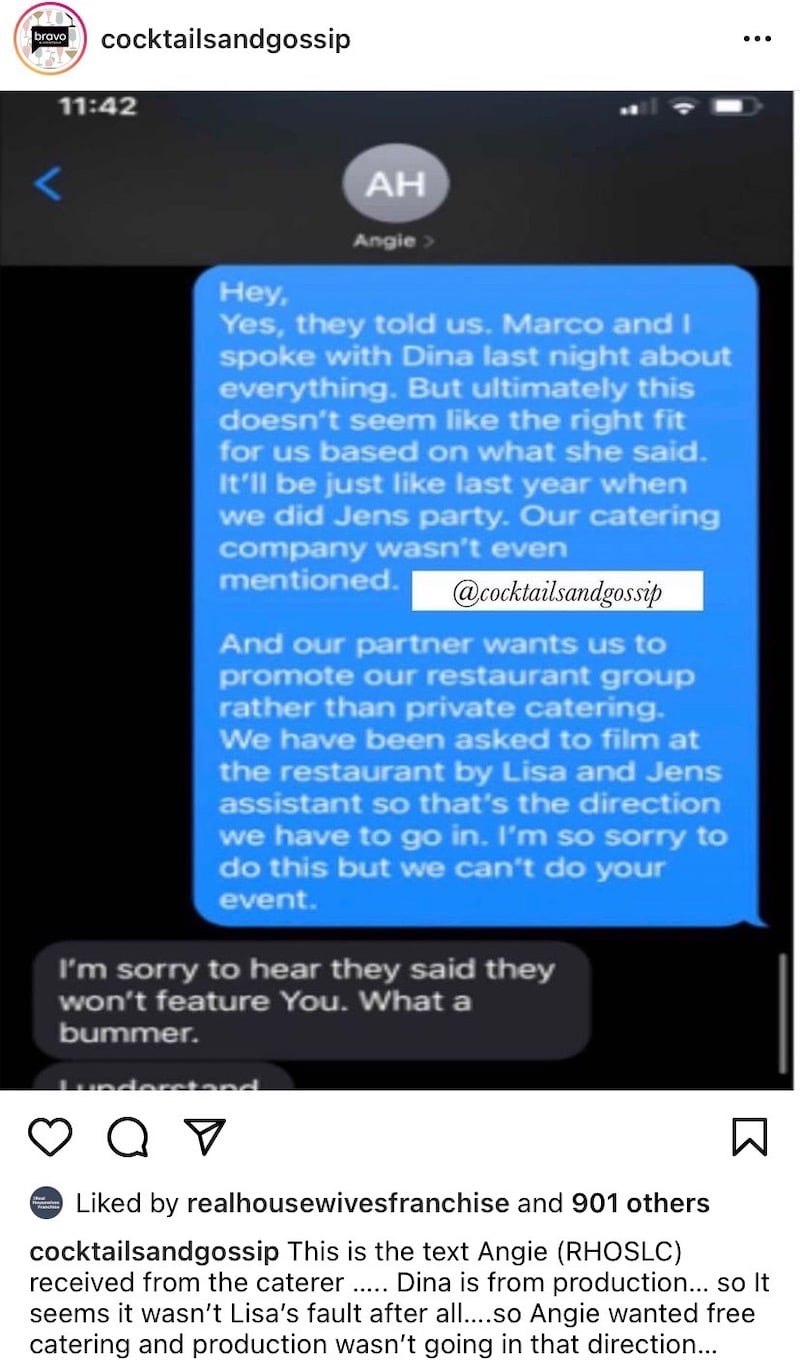 In a second post, Cocktails and Gossip further explained the back and forth, saying that the caterer wanted to film in the restaurant, rather than at Angie’s house, because it would give them more exposure for their restaurant.

In another series of messages, sent on February 5, Aubrey made plans to film at her restaurant. 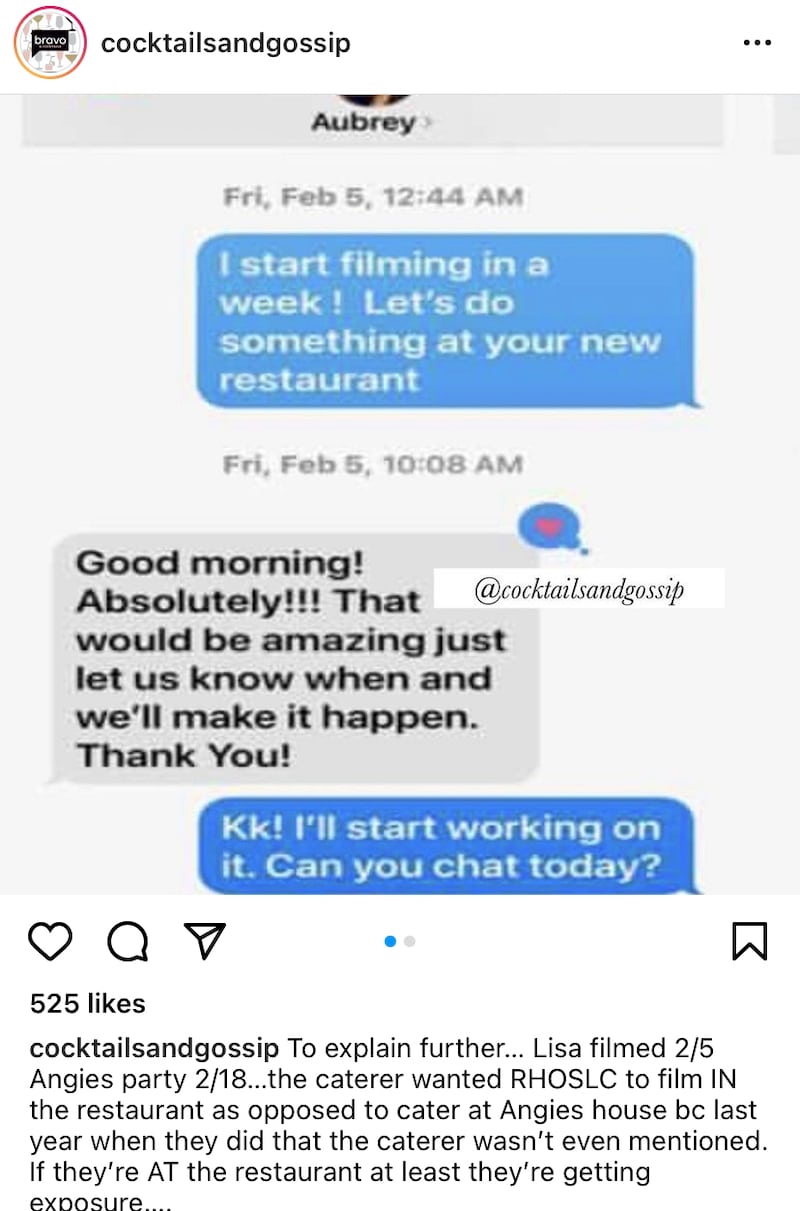 Aubrey also commented on the drama on her Instagram page and shared yet another text message.

“The truth is… [Angie Harrington] completely fabricated this story to create a story line for herself. She has falsely accused [Lisa Barlow] of sabotage. Accusing us of bad business, and it is absolutely disgusting, hurtful and most importantly FALSE,” Aubrey wrote on October 6.

“We chose not to do Angie’s event ultimately as a business decision. We had prior conversations with Lisa, and Jens assistant (Stuart) to tentatively film at our newly opened restaurant. I said yes to gather more information about her event to see if we could do it. I never fully committed or took a deposit from Angie. And the truth is she asked us to do it for FREE for advertising since it was going to be filmed. She also told me not to tell Lisa!” Aubrey continued.

Aubrey then confirmed that after talking to Dina, she “kindly declined.”

“I cannot say this enough… Lisa did NOT tell us to not do Angie’s event. Never happened and she never would do something like that. Let it be known Angie is the liar and the one sabotaging our name our business and Lisa,” she added.

The Queens of Bravo Instagram page also leaked the full text messages exchange, which shows the caterers saying no when Angie offered to pay them the full price to still cater the event.