Home Real Housewives of Potomac News RHOP Recap: Candiace and Ashley Almost Come to Blows Over Past Feud as Candiace Continues to Slam Mia, Plus Chris Voices Frustration About Her Behavior

RHOP Recap: Candiace and Ashley Almost Come to Blows Over Past Feud as Candiace Continues to Slam Mia, Plus Chris Voices Frustration About Her Behavior 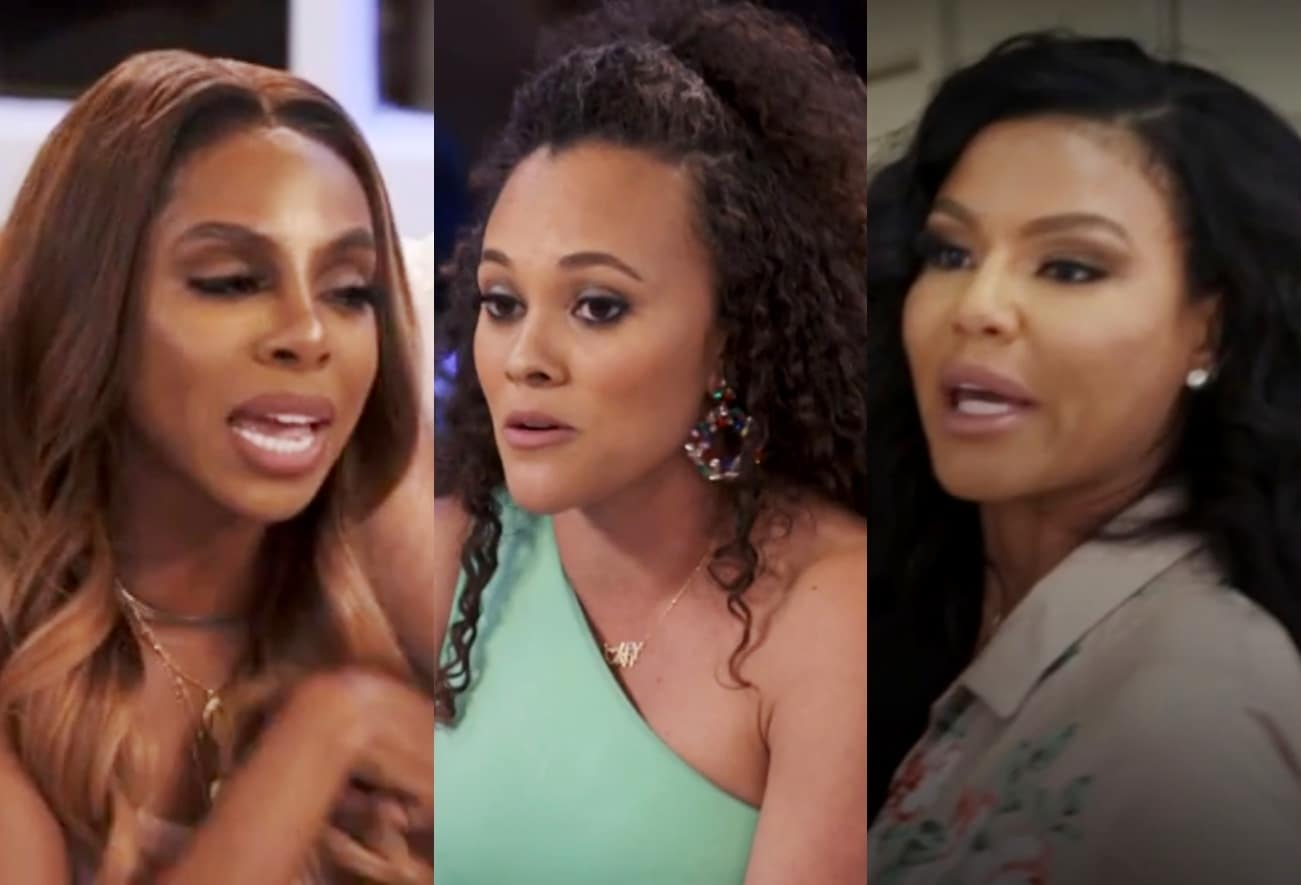 We are now back for the salad toss heard around the world with our ladies from the Real Housewives of Potomac. Will Mia and Candiace make it to the “low-budget” main course? Let us try to digest this nonsense and see, shall we?

Karen is shouting out to Candiace, “You don’t know her story!” She tries to reason with Candiace to remind her that she will regret this. Wendy and Ashley are trying to move the breakables away to no avail. She does not want to keep pulling wilted lettuce out of her good wig. I now know why Bravo has a challenging time filming in certain locations and why they have resorted to renting locations that are seemingly Airbnbs. Can you imagine the liability insurance that must be carried?

Candiace wants Gordon to just take his b*tch home, and Mia is over dealing with this toxic environment. Chris gets called in to calm his feisty wife down. He gets the intel that Candiace told “Pimp Gordon” to take his “Ho Mia” home. Chris knows he is walking into another minefield filled with shady digs that his wife has dug up. Upon seeing Chris, Candiace is afraid that she is going to be in trouble. He tries to get her to stop talking smack and must physically pull her outside so she can calm down. Candiace says, “Mia wants her smoke, and she is happy to invite her in.” I am sorry — I just do not follow this logic.

While inside, Karen wants Mia to stand up and be proud. Mia thinks that Candiace is ruthless and does not recognize that her mom is off-limits. She is proud of how far her mom has come and then states, “That little Chihuahua is not going to undermine her mom’s progress.” Side note: It is heartbreaking to hear Mia describe how her mom was not there for her, but she is willing to show her mom grace since she has maintained her sobriety. I give her major props for being so forgiving after experiencing what she did as a young child.

Askale tells Mia the low-budget comment was hurtful. She tries to get Mia to shut down all the money talk. Mia must share that she makes $450k annually and is proud of her arduous work.

Candiace does not think people should be able to say what they want, but what about the crap she has spewed? Chris asks Candiace if she is insecure since there might be a hint of truth to what Mia has said. He gives her good advice that she is fueling the fire by continuing to react to the low-budget comment. Chris wants her to tell Mia that they can both put this crap to rest. Candiace and Mia have both found each other Achilles’ heel, and they are using their stilettos to stomp on each other’s feet.

Mia thinks her mom would relapse if she heard that Candiace made these comments. She worked hard to get where she is today. Gordon comes into the room and very sweetly rubs Mia’s back and tries to comfort his wife. He quickly did a role reversal from the lecherous drunk to the sympathetic husband, didn’t he?

Gordon then pivots again and starts sticking his tongue out and rolling it around lecherously at the Grande Dame. Karen just cannot take that display of vulgarity and quickly removes herself. Gordon starts telling the story of how he and Mia met in the strip club. He paid her for her time — to just talk. I do not find it the least bit scandalous that they met and married after meeting in a club. They have created a family and a successful life for themselves despite Mia’s tragic childhood.

Chris is stuck cleaning up the kitchen, and why are Mia and Candiace held harmless? He tells Ashley congratulations on the new baby and tells her she looks good. Ashley tells Chris that his wife told her she was carrying a wide load. Chris has basically given up on trying to defend her vicious comments.

Karen and Ashley are discussing the sh*tshow they walked into. She heard yelling and screaming, saw salad being tossed, and saw Gordon rolling his tongue around. Karen then hears the true meaning of “tossing your salad” and she is mortified. She clutches her imaginary pearls and is appalled at the visual of that.

Robyn and Gizelle finally arrive at the “house of bad vibes” because their checks were being held since they were missing an all-cast event. They are aghast to find out they got a room with no bathroom. You snooze you lose, ladies. Candiace mounts Robyn when she sees her. When did they form this alliance? Gizelle tries to get her to understand that she said the wrong thing and is troubled that Candiace cannot recognize this. I am sorry, but I am distracted by Candiace’s concealer. She needs to blend it in.

Wendy comes in the room and Gizelle shadily tells her, “It is so nice to see you smile.” She’s insinuating that she has been a grumpy goat. Robyn and Gizelle both are prickly over being relegated to the attic with no ensuite. Robyn is feverishly trying to find a hotel since they do not have a bathroom and she is on her period. #TMI.

Wendy makes poor Eddie wear a matching outfit since she is trying desperately to portray a united happy front. How convenient that Mia and Candiace are sitting next to each other in the van? Gordon thankfully passes out in the van while everyone is chatting. The ladies discuss tossing the salad and teabagging and it is hilarious seeing Karen’s reactions. It was nice to see Karen and Gizelle be able to coexist and enjoy each other’s company.

Wendy shares they are having oysters, and Chris lets everyone know that Candiace does not eat anything resembling a vagina. Okay, thanks for keeping us in the know. Our Grande Dame is not interested in letting Ray’s old balls dip in her mouth. Sorry, Ray, I love you, but the image disturbs me so much, and I am Team Karen on this one. Karen thinks Gizelle and Ashley’s familiarity with it explains they have previously participated. They are all producing new acronyms, and Gordon has awoken to declare a new one: LDTBH, aka “Long D*ck To Be Had.” Gordon must have plans for Mia later…

Wendy announces to the group she is thrilled they are here. The next day they will be having a crab boil. Robyn is pouting at the table and wants to pack her bags filled with tampons and Midol. Ashley is scouting out some suitable prospects for Gizelle in the restaurant. Some random guys send over shots to the table, and everyone is appreciative. We then find out their wives are sitting at another table, so Karen goes over to properly school these men on how you should not disrespect your wives. She lets them know they will not be married the length of time she has been if they do not take her advice.

Ashley then shadily asks Chris about the altercation between Mia and Candiace. Chris is not going to let the fact that his wife does not have a good relationship with the other ladies affect his friendships with the other men.

Chris wishes he and Michael could be on good terms. Ashley tries to defend Michael, but there is tons of production evidence of him dissing Chris. She then admits it is more about Candiace going after Michael. Ashley resents Candiace calling Michael an overseer, and I can understand why that would be offensive to Ashley. I cannot help but notice that poor Eddie is struggling following where this conversation is headed. He just wants to get his dinner so he can focus on something else besides this insane tennis match.

Ashley is over Candiace acting like the victim. Chris tries to get Candiace to get up and leave when it gets heated. Candiace refuses to comply with his demands for her to calm the f*ck down. Chris then gets up and leaves the table. Candiace has not gotten over that Ashley wrote a statement in defense of Monique last season. Dre then escapes goes to find Chris and try to bring him back in. Chris comes back inside the restaurant, and he tells Dre he is over being the collateral damage in this situation.

Candiace goes to reluctantly talk to Chris, and he begs her to be the bigger person for once. Robyn and Gizelle think Candiace has not learned a damn thing from last season, and are they regretting siding with her last season? Karen thinks this night has been a pissing contest, and thankfully no one asked her if she ever had a golden shower based upon previous conversations! Sorry, I could not resist that one!

Next week, Chris is going to show off his brown d*ck. They go for a boat ride, and I hope to God they have life preservers on since there will be a man overboard with this group. What do you all think about Nicki Minaj participating in the RHOP reunion that was just filmed? Let me know in the comments! Take care, Blurbers, and have a fabulous week!