RHOBH Reunion Recap: Erika Addresses Kyle and Dorit Mocking Her Life and Says She’s Keeping Score, Lashes Out at Crystal For Asking Why She’s Not Angry at Tom 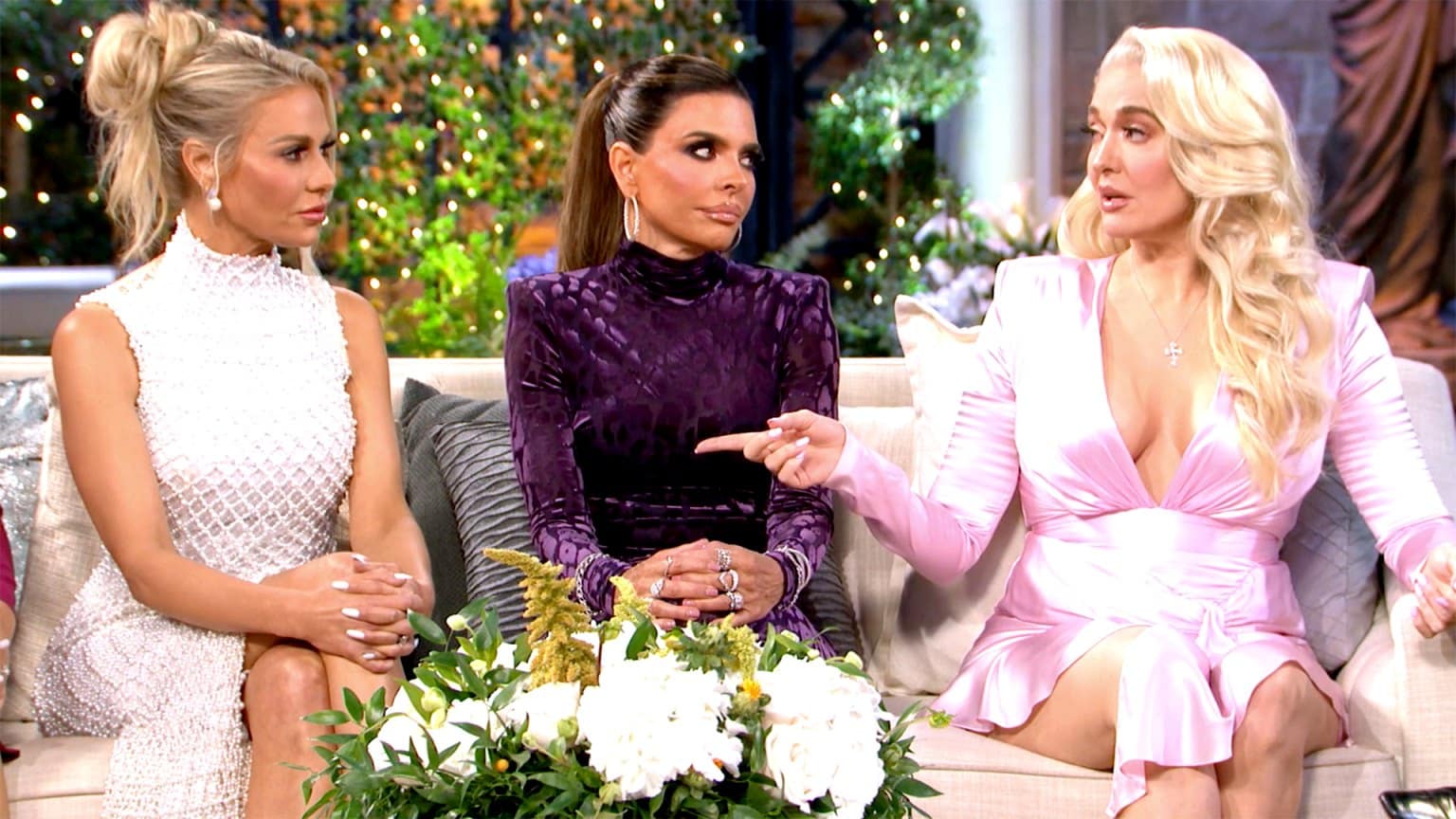 Talk about dragging out a reunion… the Real Housewives of Beverly Hills is on part THREE, and there is quite a lot of focus on everyone’s favorite new addition. Plus, Andy tells Erika, “We’re gonna put you on a skewer and I’m gonna fire up the barbecue,” even after she asks him to take it easy on her.

Kathy is overcome with emotion while she talks about her late mother, and the ladies look on in sheer terror since they have never actually seen real emotion before. Kyle realizes that American Woman caused a wedge in her relationship with Kathy, but she had high hopes that Kathy would understand this was a love song for her mom… and a paycheck for Kyle. The sisters explain that, ultimately, the kids are what brought them back together, but Kathy hints that she had a lot to do with the reconciliation. Kathy refers to Andy as their psychiatrist, and they believe that the show has def brought Kyle and Kathy closer, thanks to the laughter and the firsts for Kathy (girls’ trips… driving a car… the usual stuff).

Kathy shares that “the lady” is Paula, her housekeeper, and that she does actually eat on tray tables with her husband and their kids cuz it’s “cozy.” How cute. Evidently, Kim loves that Kathy is on the show, and Kyle lets the viewers know that she has Kim’s new phone number. Kyle even muses that it would be nice to have all three sisters on the franchise one day.

Remember when Garcelle forgot her sister Carole when she was rattling off the names of her six brothers and sisters? Garcelle explains that she is currently having a rocky patch with Carole, and not because she forgot her name on national television. Garcelle sees Kathy and Kyle’s mended relationship, and she has hopes that one day things will be better for her and Carole.

Looking back on Crystal’s time this season, I realize that there is more to her than her ugly leather pants. Crystal explains how she worked for an escort agency, and Erika enjoys that Crystal was able to be so open about her past with the group… something Erika should consider doing in her life.

“The coat that launched a thousand tweets” gets brought up, and Crystal states that the way she was feeling was compounded over a few negative instances with Sutton. Sutton continues to stand by the fact that she thinks the word “violation” was extremely strong and was not properly used. Andy asks if Crystal’s past issues with body dysmorphia had something to do with her extreme reaction to Sutton walking in on her naked. Crystal agrees that had A LOT to do with the situation, but the ladies have since worked out their differences post-season.

Crystal states that she receives hundreds of racial threats a day about being Asian and about being on the show. She had no idea how horribly received she was, and Andy reminds her that she should not let a percentage of a*sholes on social media ruin her experience. He outwardly shares how bad he feels for Crystal. Crystal explains that she is proud of her family and her culture and has enjoyed sharing things about her life with the women. Kyle jumps in to tell us all how fun the Chinese New Year celebration was, and Rinna calls Crystal a little sister. Anyone else see Crystal cringe when Rinna said that?

Rinna has since moved all her vintage dresses out of her garage as per Andy Cohen’s recommendation, and Dorit gets voted best dressed by Garcelle. Many of the women nod in agreement, and Dorit explains that she buys and owns all of her name-brand items. She states that she doesn’t get a lot of discounted goods and prefers to wear what she likes despite the high price tag.

Speaking of high price tags, Kyle talks about the diamond earrings Mauricio gifted her that have since been stolen. In contrast to that, Kathy shares that she and Rick don’t exchange gifts, but he did get her a sterling silver shell and she got him a sweater, so there’s that. Wealth whispers, huh?

“Who is honky dory?” After watching Kathy’s highlight reel, Kyle shares that what we saw this season, is really, truly Kathy. Seeing Kathy makes it a little easier to understand Kim — those Richards sisters sure are… eccentric. That’s a nice way of putting it. A lot of Kathy’s quirks come from her mom, including the box fan and the crazy expressions like, “I’m gonna have a gorilla.” Kathy explains that although she and Kim seem to be the kooky ones, “nobody knows the real Kyle.” Interesting… wish we focused on THAT for this third part of the reunion cuz all this filler just ain’t cutting it.

Kathy shares that she lived in the Waldorf Astoria for nine years and that her father-in-law and her hubby Rick’s grandfather founded all of the Hilton hotels. Kathy makes it clear that her husband has nothing to do with the business as they have sold the hotels.

As Erika watches her lies catch up with her over the course of the season, she observes, unblinking, stone-cold. Erika states she is keeping score of who is with her and who is against her, and Kyle butts in to clear the air with Erika. Typical Kyle a*s kissing. Erika explains that the dinner with Mauricio, Dorit, and PK mocking her life really hurt her feelings. Dorit states that upon repeating Erika’s story to the husbands, things got jumbled and confused and it just got out of hand trying to explain it… much like it got jumbled and confused when Erika tried pulling it off as truth.

There is nothing that legally ties any of the women to Erika’s case, and although Erika states that she will answer any question that the ladies throw her way, she becomes hostile and aggravated about certain subjects. Erika claims she has been straight up with the group from the get-go, and Sutton explains that it felt as though Erika ran away from the group, especially when trouble was right around the corner.

I love how when all the women are talking over each other and Kathy interjects, everyone listens. She asks why people got all hot and bothered over Erika’s case as there have been other Housewives who have had legal troubles. Andy differentiates Erika’s case by explaining that there are VICTIMS that are owed millions of dollars in this situation.

When asked how she feels about the allegations against Tom, Erika retorts, “I loved my husband… how the f*ck do you think I feel?!” Always about her, and once again missing the opportunity to address those that have been victimized. Erika FINALLY says she feels horrible for what her ex-husband allegedly did, but Crystal asks the 64,000 dollar question: Why is Erika not apologizing to the victims?? Erika blames “boundaries” of what she can and cannot talk about, but Andy reminds Erika that she is doing a good job of coming off as if SHE is the victim.

Erika keeps saying that she dances around certain answers under the advisement of her lawyers and claims she has chosen to say as much as she possibly can… legally. Erika is not surprised that the viewers feel the way they do, but she is irked that the women sitting by her on the couch question her, especially when Kyle brings up her risqué Instagram posts during this volatile, legal time for Erika.

Erika pretends to play dumb and doesn’t think that she needs to get off of social media, but Andy states, “It lands differently when there are aircraft victims.” When Garcelle tells her she must shift a little bit in her content, Erika refuses.

When Andy straight-up asks Erika if she knew about the financial issues, she states that she did not work at Tom’s law firm, but she never directly denies that she knew what was occurring. So sneaky. Crystal questions where Erika’s anger toward Tom is? Erika says, “I am very angry. Hear it in my voice,” as if she can put us all in a trance to actually believe her BS. Erika denies that she knew Tom was in financial disrepair, and as the pressure builds, she turns to Crystal and questions, “Am I angry now enough for you?” Sounds like a broken woman to me.