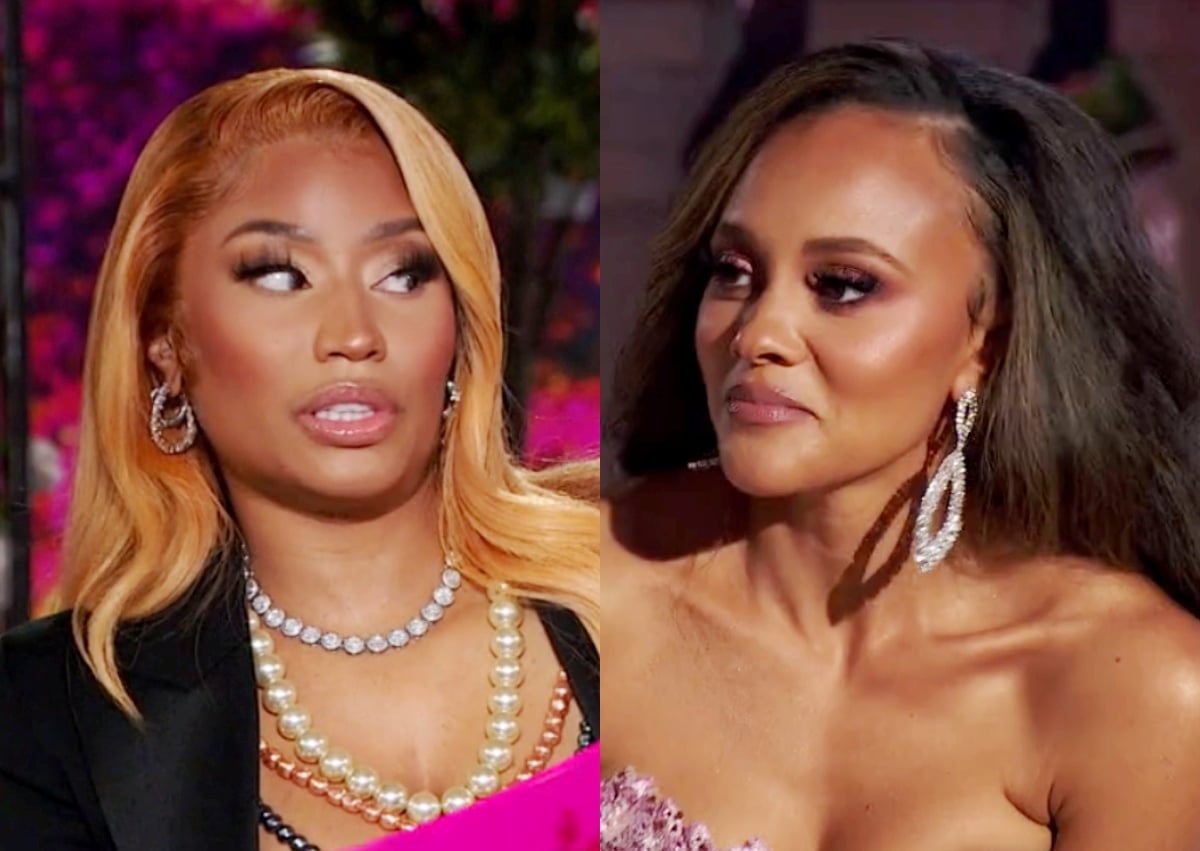 We are almost to the finish line, Blurbers, for the Real Housewives of Potomac! What will happen in this episode when the husbands are put on the hot seat to defend their wives and themselves? What kind of shady fuel will the controversial Nicki Minaj add to the already fiery ladies in Potomac? Grab an extinguisher!

Wendy is trying desperately to show Gizelle that she had plastic surgery for herself and not to keep her man. She is pissed at Robyn and thinks she did not defend her. Robyn tries to explain she thought Wendy was referring to the old rumor that was brought up before and dismissed. She thought Wendy got fired up when another story came out. Wendy wants to go straight to the head of the snake — meaning Gizelle, I presume — and cut its head off.

Wendy pulls out a giant cardboard text that shows the discussion between her and Robyn. This bit of evidence shows nothing other than them discussing the original rumor. Robyn tries to defend herself by saying she was not sure if she was referring to some new rumor, not the bogus one. Side note: It became blatantly obvious that Wendy could never have been a lawyer since the evidence she whipped out had zero substance, just like her new persona.

Andy asks Gizelle why she did not pull Wendy aside privately and address the rumor. Gizelle was apprehensive to do that since Wendy’s intense reaction to questioning was aggressive, and she thought it was better for Ashley to do her dirty work. Mia then asks Wendy if it is false, “Why is she so upset over it?” Wendy thinks that the way it was introduced showed that Gizelle was being calculated. She then pulls out her phone bill when Gizelle mentions that they had a conversation. Wendy thinks that Gizelle is a liar since she initially thought she called Wendy and then remembered Wendy called her. She also did not think they had a lengthy conversation over a minute phone call.

Ashley does not understand why Wendy cannot understand that they were all targeted in the past and you must learn to roll with the punches. Andy thinks that Wendy needs to step up her receipts game, going from Monique’s binder to a loose-leaf folder in her case. That woman is grasping at straws here.

Robyn’s issues with depression throughout the season are illustrated. She mentions all the opportunities that she had to expand her line, but she did not return the calls. Robyn and Juan’s tumultuous relationship is also profiled. Juan gets called out by viewers for saying she was unattractive when she was in a funk. Andy asks her if they are getting married next year, and she is evasive on that question. The other ladies do not look convinced that it will ever happen EXCEPT her friend Gizelle.

Andy asks Robyn about the episode when Juan jumped in the car while she ran after him in the parking lot. For the record, Juan did drive back when he left the warehouse being pissed over her mentioning his poor parenting on camera. Robyn’s segment was a big nothing burger.

Andy leaves the stage during a break and finds Nicki Minaj backstage. Nicki looks excited to get the opportunity to moderate this reunion. She has been given permission to take sides when she takes the stage with the RHOP ladies.

Sorry, that was just a tease. We now have the husbands heading out on the stage, excluding Juan and Michael. Juan is not present since he is a coach,. Michael has pneumoniaf or the reunion version of Montezuma’s revenge.

Chris is sporting Candiace’s record cover on his shirt under his jacket. Dorothy then calls right on time, and she seems delighted that she is allowed to be heard. She admits that she has not apologized to Chris’ face yet. Chris wants Andy to just hang up on her since he knows his mother-in-law has no intention of apologizing.

Gordon gets asked about his experience on the show. He enjoyed himself and liked getting to know everyone. Gordon apologizes to Ashley for upsetting her on the bus. Ashley is pleased since apologies rarely happen on the reunion stage.

Ashley gets called out about being upset over Gordon’s behavior when her husband has been super nasty in the past. She tolerated Michael’s butt squeezing and does not believe Michael did anything overtly sexual. Andy reminds Ashley that Michael did offer to suck Juan’s d*ck. Ashley plays it off like it was just a joke.

Karen is willing to give Gordon a pass since he got to know her before he became inappropriate. Robyn gets called out for Juan not showing up for her. She just keeps making allowances for him and suggests he is just busier than the other husbands. Chris admits to being Candiace’s glorified secretary. He says that he never had a conversation with Dorothy over his financial situation. Chris defends himself by saying he never quit a job. He does not say what exactly he does to explain where his income comes from.

Candiace admits she is like her mom, and she has some great qualities that she would like to emulate. Would you all brag about that if Dorothy was your mom? Side note: Don’t you all wish that Candiace told Andy on camera how she felt about her treatment last season from him? I do not believe for one second she spoke to him the way she claimed.

Candiace called Mia handsome on social media and that prompted Mia to find an unflattering shot of Candiace’s feet. She resented Mia for putting her wonky feet on social media. Mia and Wendy then go at it over Mia saying that Eddie does not make eye contact with her. The camera pans to Eddie, and he looks mortified when his wife starts obnoxiously spouting off a litany of, “He tossed your salad.”

Eddie then gets questioned about the rumors about his alleged infidelity. He was troubled that no one took his family into consideration when they mentioned the rumor. Eddie did not lose his sh*t when this is brought up like his wife has all season. He really did not answer the question because he did not definitively say there was no other baby mama — he just said they should have been considerate of his family.

Karen and Ray’s journey through the last year is now profiled. She is still involved with Surry County and is proud to report that they now have Wi-Fi. Chris tries to compare himself to Ray when Karen shares how supportive Ray was of her career. Sorry, Chris, Ray supported Karen during their entire marriage and is now her biggest cheerleader when she is venturing out on her own. Chris defends not paying the mortgage since it was an investment property. Did it appear that Chris had some liquid courage this reunion? His responses were rather spirited.

The question about Michael and Juan not wearing wedding rings is brought up. Michael has some bizarre ailment that prevents him from sliding his ring over his knuckle. Robyn had to sell Juan’s ring since he never wore it because he is an NBA player in every sense of the word. The guys are released now, and we see Nicki is making her way to the set. Bravo must have really needed to spice things up — to bring the very controversial Nicki Minaj in was pretty extreme.

Andy mentions needing some tequila, and Nicki delivers it and then proceeds to deliver her brand of shade. The ladies stand up and look shocked to see her in the flesh. Nicki tells them she loves and respects them, but she is prepared to eviscerate them and wants them to have fun with it.

Nicki questions Ashley about being Gizelle’s sidekick. She shades her on not having a storyline and says she should have just stayed home with her new babies. Nicki has picked Ashley to start with, but something tells me she is just getting warmed up and will be sharing her toxic shade with this group…

Next week, Nicki is going in hard on these ladies, and they do not look like they are having a lot of fun with this. I hope everyone has a wonderful Thanksgiving this week!