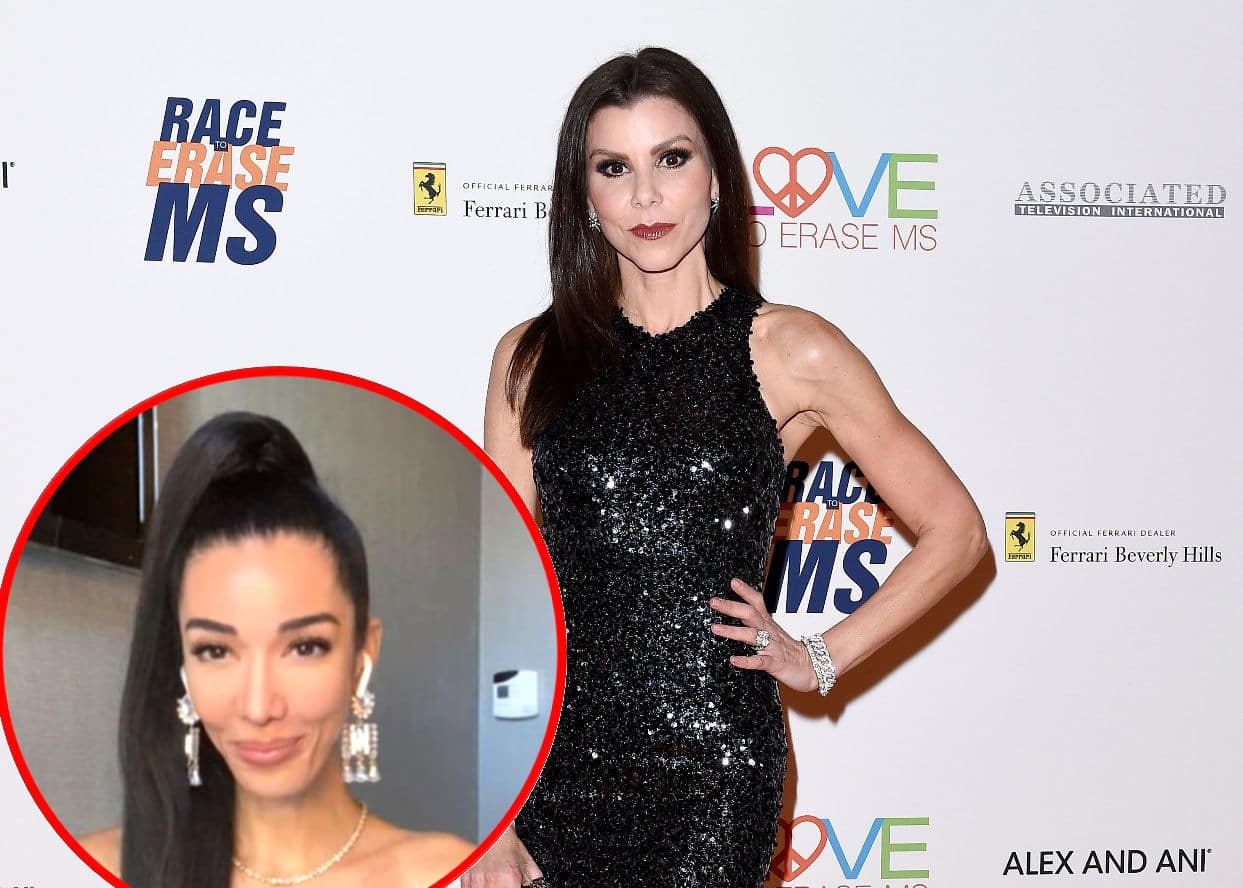 Heather Dubrow is speaking out about the podcast room that prompted Noella Bergener to label her as a narcissist amid the latest episode of The Real Housewives of Orange County.

After a viewer on Twitter posted a screenshot of the episode, in which Noella admitted to being “creeped out” by all the Heather memorabilia in the room and noted that she may have made a mistake with her wall art, Heather defended her self-themed workspace.

But the poster was no accident.

“That’s a TV show I’m working on … those are my vision boards,” she explained, defending the room’s decor. “Stay tuned for a tour of the room! It’s awesome!” 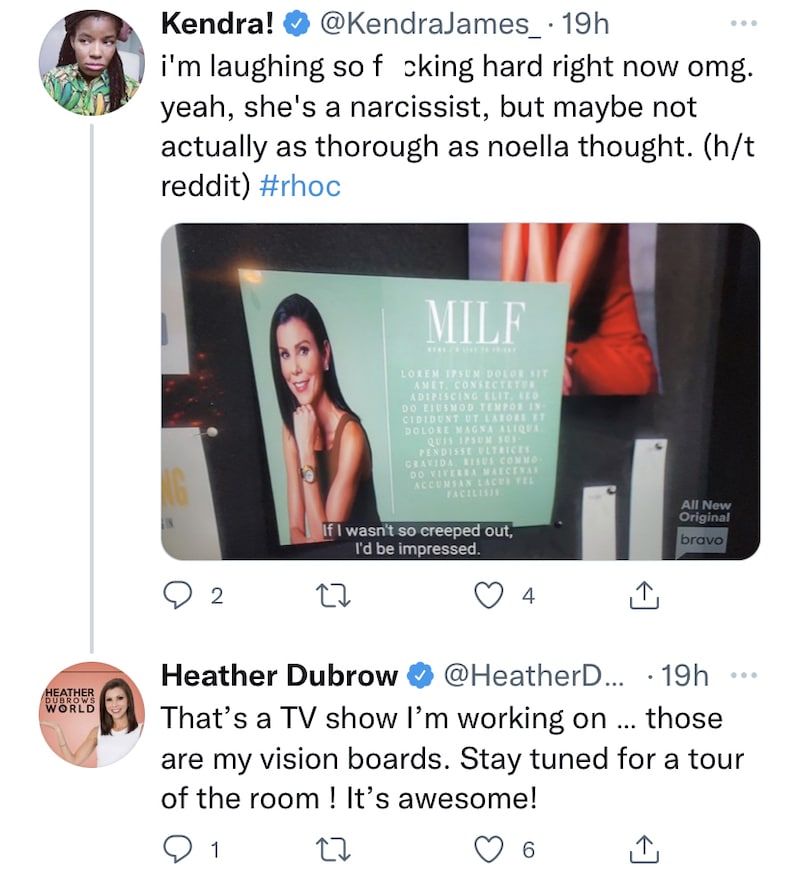 Another RHOC viewer weighed in on the ongoing feud between Heather and Noella, which recently featured Heather warning Noella about the upcoming reunion.

“[I’m] already so excited for the reunion. [Heather’s] holding a lot in her back pocket,” the person shared.

“Yes I am!” Heather confirmed.

Also on Twitter, as Noella seemingly proved that she was not late to arrive at Heather’s 22,000-square-foot home, where she proceeded to accuse her castmate of purposefully filming an infomercial in front of her to impress her, Heather responded to a fan who said her previous claims against Noella (which accused Noella of trashing her business and character) made sense only if she was truly late.

“OK! Now you calling her out for being fake in this moment makes sense if she was indeed late. That wasn’t stated originally,” the Twitter user noted.

“Trying not to get lost in the weeds here. Bottom line is, she knew I was working. Not a big deal to wait 3 minutes until I finished talking. Wasn’t trying to impress her or anyone, was just working,” Heather replied. 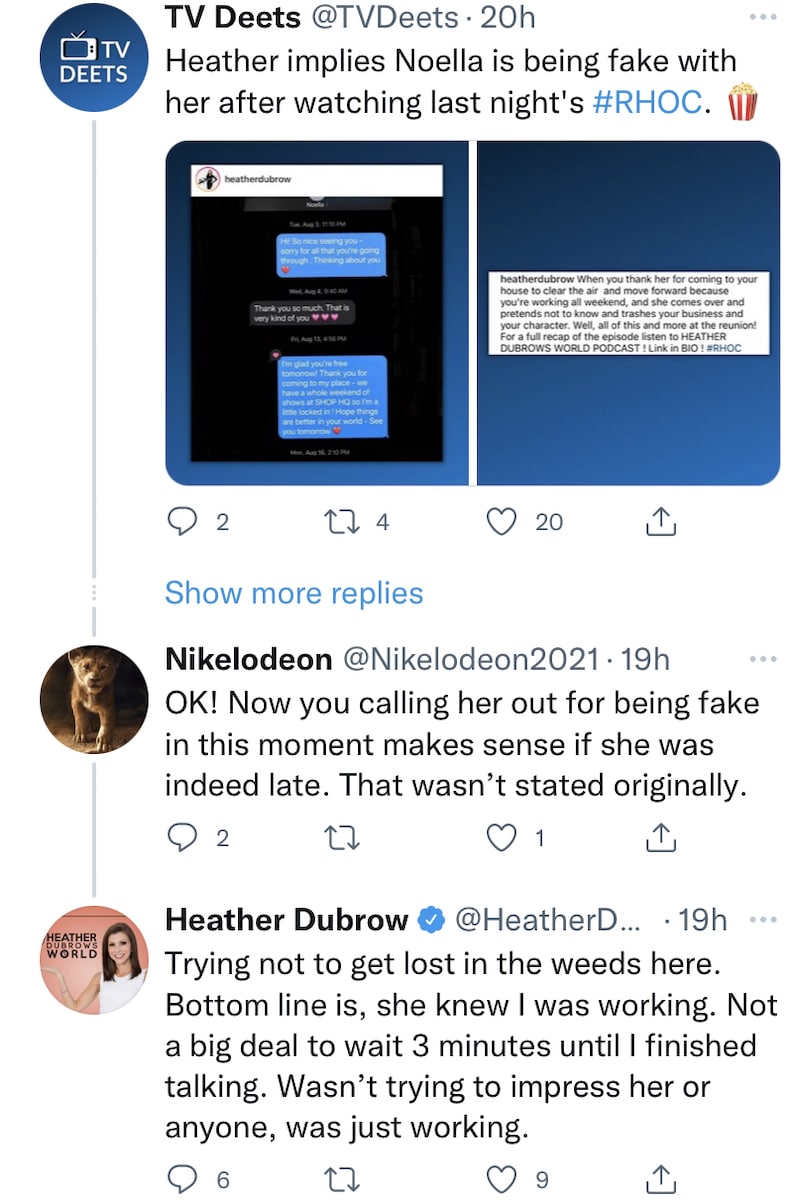 In a series of leaked text messages shared by Heather earlier this week, Heather was seen making it clear to Noella that she was “locked in” with work but could squeeze her in.