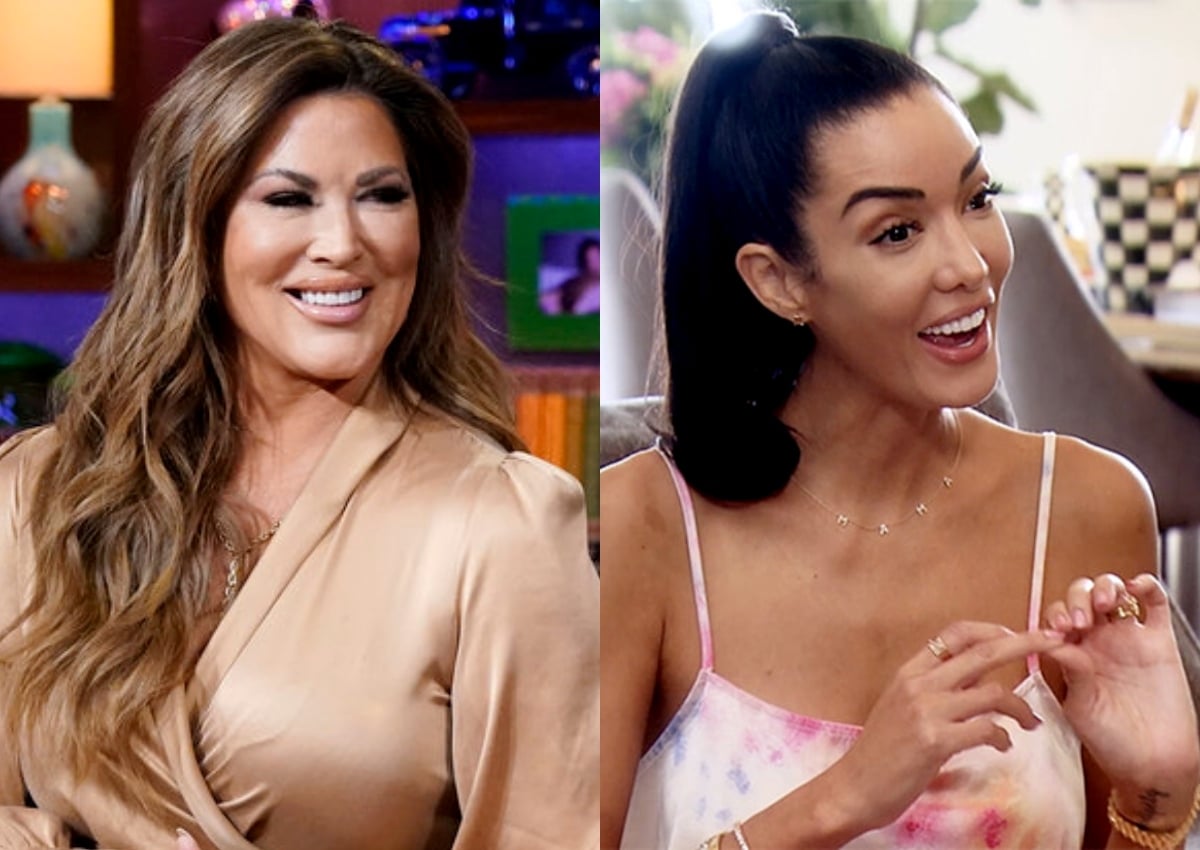 Emily Simpson reacted to Noella Bergener‘s allegations against Heather Dubrow on Wednesday night’s episode of The Real Housewives of Orange County while appearing on Watch What Happens Live after the show.

After Noella claimed Heather had thrown people against the wall, Emily shaded her credibility and slammed her as “thirsty” before looking back at her tense encounter with Nicole James and offering an update on her post-bar relationship with husband Shane Simpson.

“If you notice, [Noella] contradicts herself. She said she heard and she said she saw. So when someone contradicts themself, it takes away their credibility [and] I don’t believe them at all,” Emily admitted of Noella’s accusations of violence against Heather on the January 12 episode of WWHL.

Because Noella made such serious claims against Heather, Emily totally understood why Heather didn’t want to include her in their then-upcoming girls’ trip.

“She went to her house and accused her of assaulting someone. If someone was going to accuse me of criminal behavior I wouldn’t want them to go on a trip to me either,” Emily stated.

While Emily was quite supportive of Noella as she endured the early moments of her split from husband James Bergener, she hinted that their relationship changed as the season continued after being asked about Gina Kirschenheiter‘s doubts about Noella.

“I think all of us, probably, are trying to figure her out. And I think that initially I was close with her because I just wanted to do the right thing and be there for her, but as the season progresses, you start to question things,” Emily revealed. “I think Gina was right questioning her, in general.”

During last week’s episode of RHOC, Noella accused her fellow newbie, Dr. Jen Armstrong, of being “thirsty.” But according to Emily, Noella is the thirstier of the two.

“I’d say Noella. She does Instagram from her bathtub. That’s thirsty,” Emily reasoned, going on to note that Noella is “attractive, in the bathtub.”

That said, Jen wasn’t free from Emily’s critiques. Instead, she was labeled as Emily’s “least fun” castmate, and Gina, Emily’s closest friend on the show, was given some friendship advice.

“Text back sooner,” Emily told her.

As the episode continued, Emily revealed she misses Braunwyn Windham-Burke the least out of her, Vicki Gunvalson, and Tamra Judge. She also looked back on the drama she encountered with Nicole at Heather’s party on the premiere episode of season 16.

“I have a very short tolerance for people, and especially when they try to make me feel incompetent… I felt like I was asking her questions to try to like, get the truth out and when she came at me, it came at the wrong time and I was pissed,” Emily confessed.

As RHOC fans well know, Emily butted heads with Nicole after Shannon Beador revealed that she had allegedly filed a lawsuit against Heather’s husband, plastic surgeon Dr. Terry Dubrow, years ago. However, while Shannon slammed Emily and Gina for failing to be loyal, Emily denied her decision to reveal what Jen said about Noella, to Noella, was hypocritical.

“There’s a lot more to that story and I hope it comes out at the reunion because I have a timeline and I feel like people need to understand more [about Shannon] and that’s all I’m going to say about that,” she teased.

Then, when asked which current cast member Emily complains about most, Emily said it was Shannon while Shane felt it was Jen.

Also on WWHL, Emily said her marriage to Shane has been much easier since he passed the bar in 2021.

“Oh yea, absolutely. I feel like now that that weight is off his shoulders, we don’t have to focus on that and we move forward.”