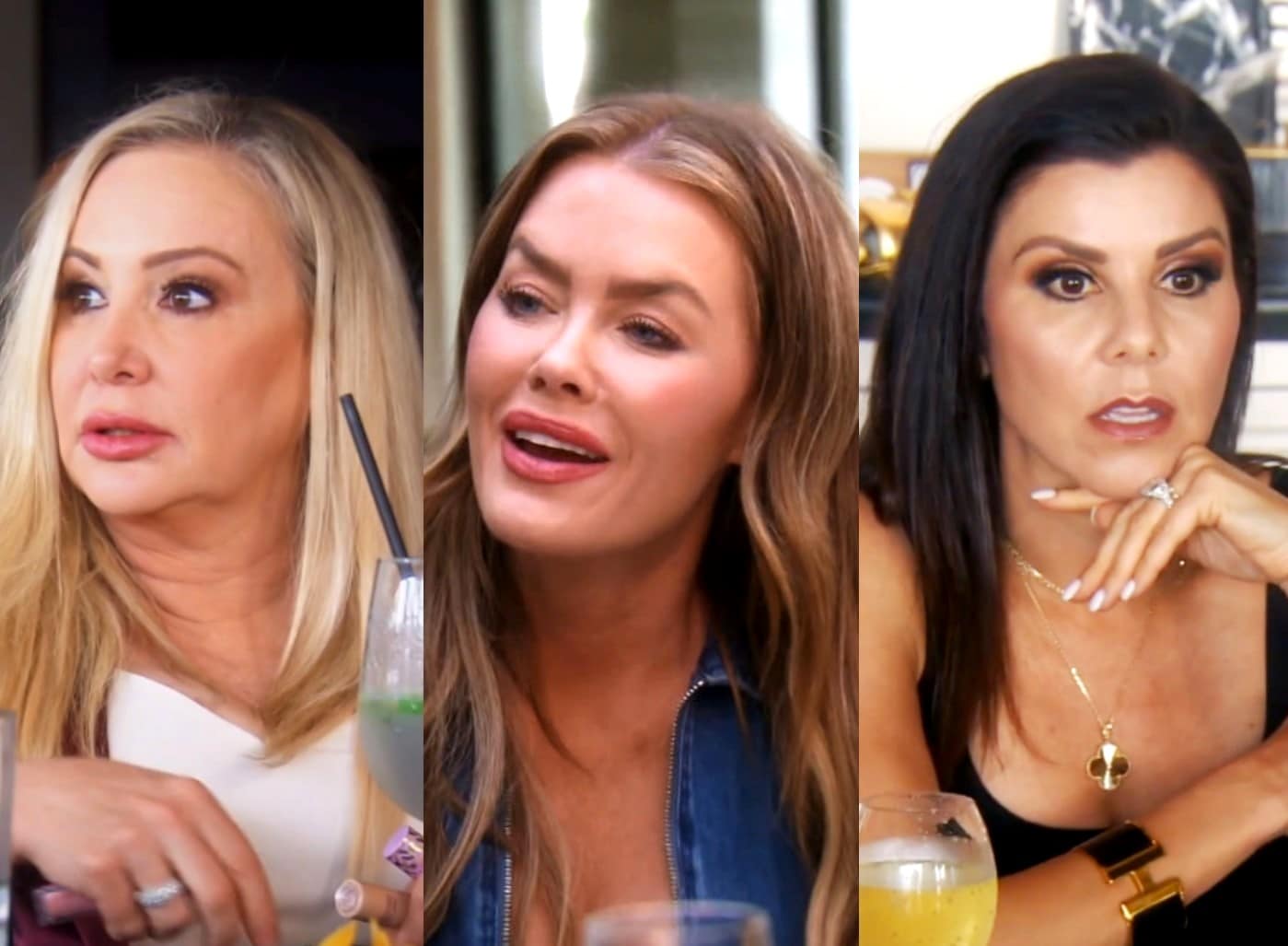 It’s a brand-new season of the Real Housewives of Orange County full of some brand new faces… some we have seen before (just “fixed up”) and others we are just meeting. It’s a tangled web of ladies who appear to have some connection to each other, but sometimes the past catches up and ruins friendships of the present.

Fancy Pants is BACK, bringing the opulence, the wealth, and the incredible family along with her. Heather’s kids have grown because time has passed, but Heather has not changed ONE bit. She gathers her fam around the table of their 22,000-square-foot home and gets reintroduced to her own kids in front of the camera. Her twins are almost 18 and her little CoCo is a second-degree black belt. It was a great Q and A for the fans, but a rather odd familial interaction…

Emily explains that things are GREAT between her and Gina, despite some past hiccups, and after pilates, Emily shares some big news. Shane finally PASSED THE CALIFORNIA BAR EXAM. He has taken it approximately 45 times, but because the passing score has been lowered, Shane was able to reach his goal. Speaking of significant others, Gina and Travis, her boyfriend, are still going strong. Travis is a breath of fresh air considering Gina’s past with her ex, Matt.

Gina still made her victim statement against Matt. She explains that it was very important for her story to be told, but hearing Matt tell the judge he was guilty still brings Gina to tears. The testimony snippets we hear are upsetting, but Gina is proud of standing up for herself and for Matt taking ownership of his actions.

Only one of the tres amigas is still standing, and she is holding on tight to her three daughters for fear of losing them, too. Shannon’s girls are growing up quickly, and she desperately does not want to be alone. Luckily, she is still dating John. And there’s always Archie…

Heather meets up with Nicole (pre-demotion), and the women go on a leisurely stroll. Heather discusses her upcoming dinner party and hears about Nicole’s new friend, Noella. Heather asks Nicole to bring Noella to a lunch with her so they can meet and get to know each other before the party.

While on the topic of new friends, Heather explains to Nicole that she has had a re-entry with Shannon recently and has high hopes that perhaps she can have a fresh start with Shannon. Nicole mentions that she knows Shannon as her daughter went to preschool with Shannon’s daughter. Small world.

Do these two do EVERYTHING together? Gina and Emily pay a visit to Dr. Jennifer for some Botox. Emily explains that she has gotten everything essentially done as of recent, and so she is the perfect person for Gina to lean on for her entrance into Botox. Enter Dr. Jen in her skintight dress and strappy heels, which I am SURE she wears to the office on the reg (not).

Before Heather lunches with Noella and Nicole, she meets with the manager of Nobu to discuss the upcoming event that she is hosting at her house. She plans every detail until Noella and Nicole roll up in highly inappropriate ensembles for a daytime luncheon.

In the meantime, the BFF duo is together yet again. They are opening their circle and Shannon comes to meet them — are they the new tres amigas? As they sling back tequila shots, I am just hoping Gina has a DD… too soon?

Heather is busy trying to figure out how Noella and Nicole became friends. Noella explains that her husband is an attorney ON A BILLBOARD and explains how they met online and have been together ever since. Noella even goes as far as telling Heather she has a sex dungeon in her house. Heather looks like she wants to abort the mission, especially since she is just meeting Noella for the first time.

In the meantime, Shannon tells Emily and Gina that she remembers Heather’s “friend” Nicole… but she is hoping that it’s not who she thinks it is. Apparently, Nicole James used to be Nicole Weiss and Shannon teases that *something* went down with this woman back in the day. Seems like Shannon has a lot of friends that WERE, huh? Gina, Shannon, and Emily move on to the next bar since they aren’t done cocktailing yet.

Over at Jen’s Newport Beach house, we get a look into her family life. She has three kids and a husband, Ryne, who doesn’t seem like he even knows who his wife is when he greets her. Turns out that Ryne never wears a shirt and seems to always carry around a small dog while being kind of snarky to Jen. Bad look.

Can we discuss how a drunk Shannon dined and dashed from Javiar’s? How awkward that those three bozos got wasted the night before, bumped into Heather, and Heather got stuck paying the bill. Especially awkward that Gina and Shannon are now out to lunch with Heather and have to face the embarrassment — and check — head-on…

Heather invites Shannon and Gina to her dinner and then states, “I’ve got empty seats at my table, cuz some of my girlfriends can’t come.” When Heather likens her dinner table to the Hunger Games and asks for nominations of who should come, Gina suggests Dr. Jen cuz who wouldn’t wanna see a doctor whoop it up? Ya like that Vicki reference?

So it turns out that Shannon does know *something* about Nicole. In her drunken stupor the night before, she spilled to Gina and Emily that Nicole sued Terry Dubrow. This is something that Heather should know. I mean, who cares that Nicole dated Kid Rock!? Let’s get this tea spilling about the legal issues. Gina is not sure why Shannon is refusing to bring this up to Heather, but it is mind-blowing to think that Heather doesn’t know!

Love how Heather just spur-of-the-moment uses any opportunity to show off her estate. She invites Gina and Shannon to leave the restaurant and see her finished house. The last time Shannon saw it was back in 2015, mid-construction mode. Hilarious that Heather warned the ladies that her house may be a mess, but then they get there and it’s impeccable. Shannon starts to feel nostalgic in Heather’s house as they used to be neighbors and it triggers her to think of the past. And so she naturally makes it about her.

After seeing all of Heather’s extra-ness, Gina says she is not even sure she wants to be her friend anymore. LOL. Everything is so organized and clean and absolutely over the top. I mean, HOT TOWEL DRAWER? Thanks for the tour that we all needed, Heather. We finally have that closure after YEARS of wondering how that place turned out, amiright?

Later, Noella goes over to Nicole’s house, and we get to hear about Noella being a “full-time mom with full-time help,” aka, her mom. Noella bonds with Nicole and loves being around her because they are not typical OC mommies. Noella loves the life she lives with her hubby, Sweet James, and she will take the lifestyle any day even if it means you must be married to a guy who has his face plastered on a billboard.

On the way to Heather’s dinner, Gina and Emily discuss over FaceTime the typical Shannon behavior: stir up trouble on the down-low and keep it hush-hush to try and play the victim if it ever comes back up again. Emily and Heather are now stuck in the midst of Shannon’s weird secret about Nicole, and they are feeling uncomfortable. Gina even goes as far as saying she has no problem telling Heather what’s up if push comes to shove. Also, Nicole must have a LOT of nerve making friends with Heather if she sued Heather’s husband, no?

Heather is ready for her hyper-organized dinner event that she has planned down to the second. Shannon is the first of the housewives to arrive, followed by Dr. Jen. Shannon has ZERO recollection of meeting Jen at Braunwyn’s vow renewal because she was absolutely trashed there.

Interesting how Shannon was eager to share the gossip about Nicole, but she now backs away from the situation. Shannon just places the info and sits back to watch it unfold. Gina is uncomfortable not informing Heather, and things are gonna take a turn at this elegant event. It looks dramatic, especially when it’s teased that Heather kicks everyone out of her house after Gina spills the beans. To. Be. Continued.

TELL US – THOUGHTS ON THE PREMIERE EPISODE OF RHOC?