RHOC’s Gina Kirschenheiter Gives Emotional Victim Impact Statement as Ex Matt Pleads Guilty to Domestic Battery, Admits She Thought She Was “Going to Die” and Says Attack is “Unfair” to Their Kids

Gina Kirschenheiter and her ex-husband, Matt Kirschenheiter, appeared in court on Tuesday, where the Real Housewives of Orange County cast member gave an emotional victim impact statement in regard to his June 2019 attack.

As Matt pleaded guilty to domestic battery in an Orange County Superior Court, Gina looked back on his violent attack while also discussing the impact his behavior will have on the future of their three kids, Nicholas, 8, Sienna, 6, and Luca, 5.

“It’s hard,” Gina told the judge, according to a report from Us Weekly. “I thought I was going to die. I still get chills thinking about how I begged you to, ‘Stop. Think about the kids.’ And you responded by saying, ‘Your mom is going to die tonight.’ It echoes in my brain, and it sinks deep in my heart. That night, it literally felt like I was in a house with a stranger whom I’d never met before. Your eyes were completely black, and you were not Matt. It was so hard for me to believe that it was even you, but it was.”

“It’s taken me a lot of time, self-care, and therapy to work through what happened that night, but I have managed to forgive you for most of it. I accept that I will always have this painful memory from that night. I’ve come to terms with that,” Gina continued.

As a result of his guilty plea, Matt was sentenced to 180 days in county jail but won’t actually serve anytime unless he fails to complete 178 days of conditions, including a 52-week batterers program, bracelet monitoring, and three years probation.

Matt is also required to abide by a “peaceful contact protective order,” which restricts him from harassing or threatening Gina.

Also in her victim impact statement, Gina said that while she has “come to terms” with the idea that Matt’s behavior will impact their children, she believes it is unfair that they will one day learn details about what he did.

“To think that Nicolas, Sienna, and Luca will one day grow up to know what happened that night breaks my heart. The thought of our children having to think about what their dad did to their mom that night is so painful to me, and it’s so unfair to them,” she admitted. “As a result of your poor choices and actions, our whole family now has to pay the consequences. And I’m having a really hard time forgiving you for the impact that this has had and will continue to have on our children. With that said, because of Nicholas, Sienna, and Luca, I’m willing to keep trying to forgive you.”

Following her day in court, Gina returned to social media, where she shared a screenshot of a sweet video her boyfriend, Travis Mullen, made for her in which he reminded her she is “loved.”

“Hard day,” Gina wrote in the caption. “I love you [Travis Mullen]. Thank you for being you.” 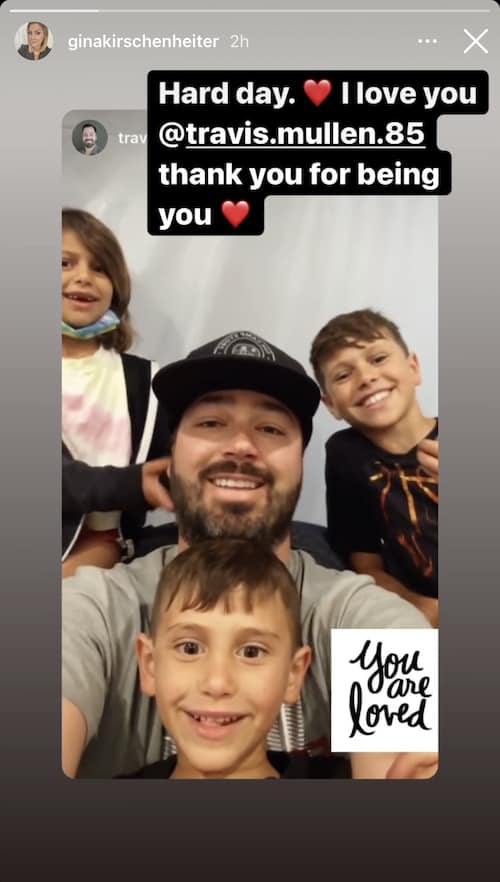