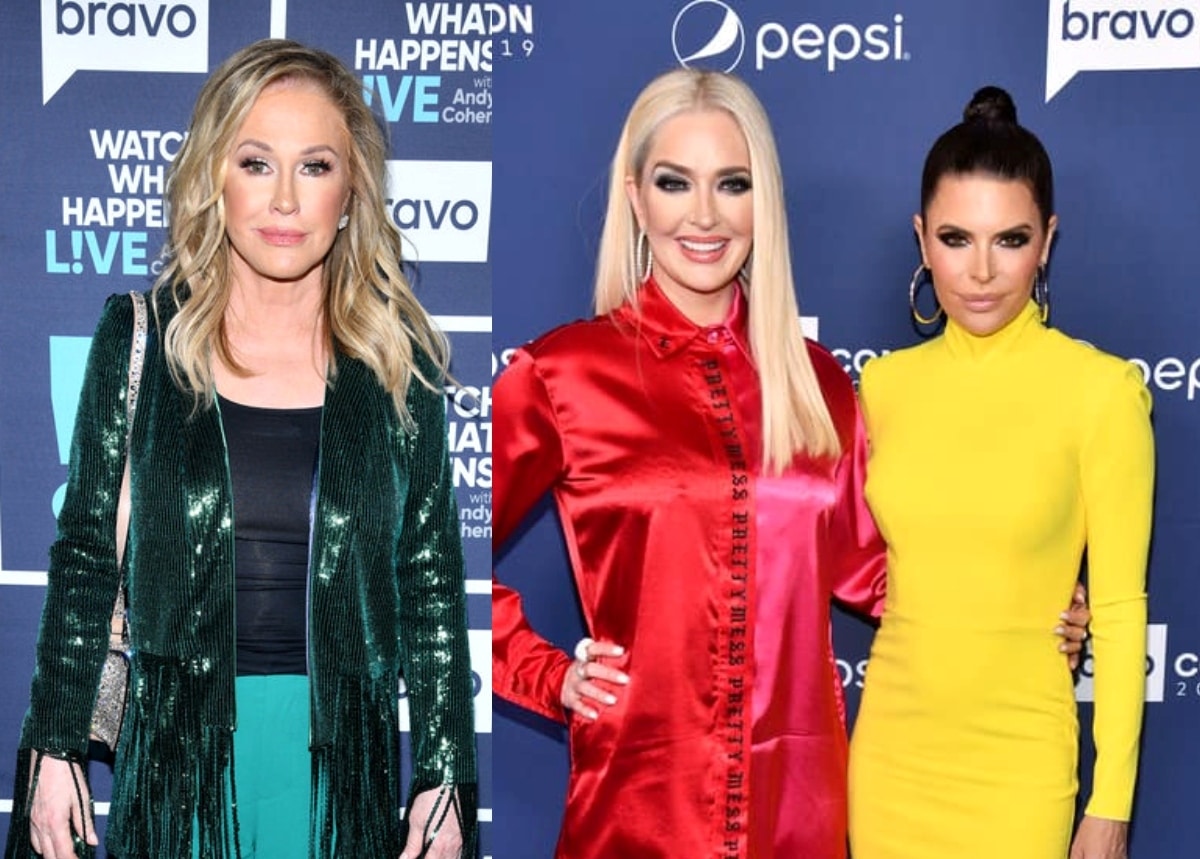 Kathy Hilton sent out what appeared to be a plea for help amid the Real Housewives of Beverly Hills cast’s trip to Aspen over the weekend.

As the ladies filmed new episodes for season 12, Kathy was caught sharing and quickly deleting a message to her husband, Rick Hilton, in the comments section of a post he shared from their Bel Air home as her castmates, Erika Jayne and Lisa Rinna, caused confusion with messages of their own.

“Please call me I need to get out of here now!!!!!” Kathy wrote in her message, which was captured on Instagram by Olivia Greene and reshared by Queens of Bravo. 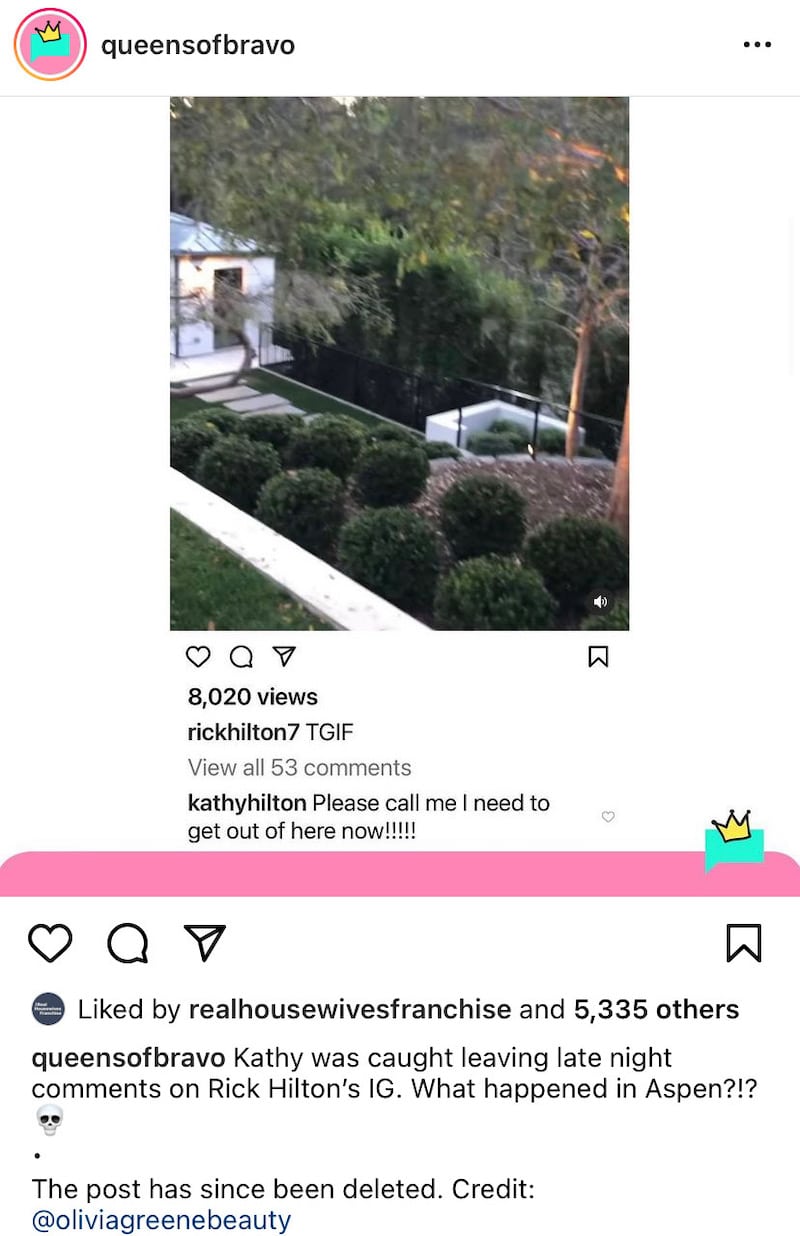 Although there has seemed to be a clear divide amongst the RHOBH cast in recent days, with Garcelle Beauvais and Sutton Stracke unfollowing Erika on Instagram at the end of last week (and Sutton refollowing shortly thereafter), Erika threw everyone (even Real Housewives of Potomac cast member Robyn Dixon) for a loop when she shared a happy cast photo on her Instagram page.

“THIS is a good time,” Erika wrote in the caption of her post, which featured Garcelle, Sutton, Lisa Rinna, and Crystal Kung-Minkoff.

After seeing the image, as captured by Comments by Bravo on Instagram, Lisa added to the confusion, saying, “Didn’t your Momma teach you not to believe everything you read…” 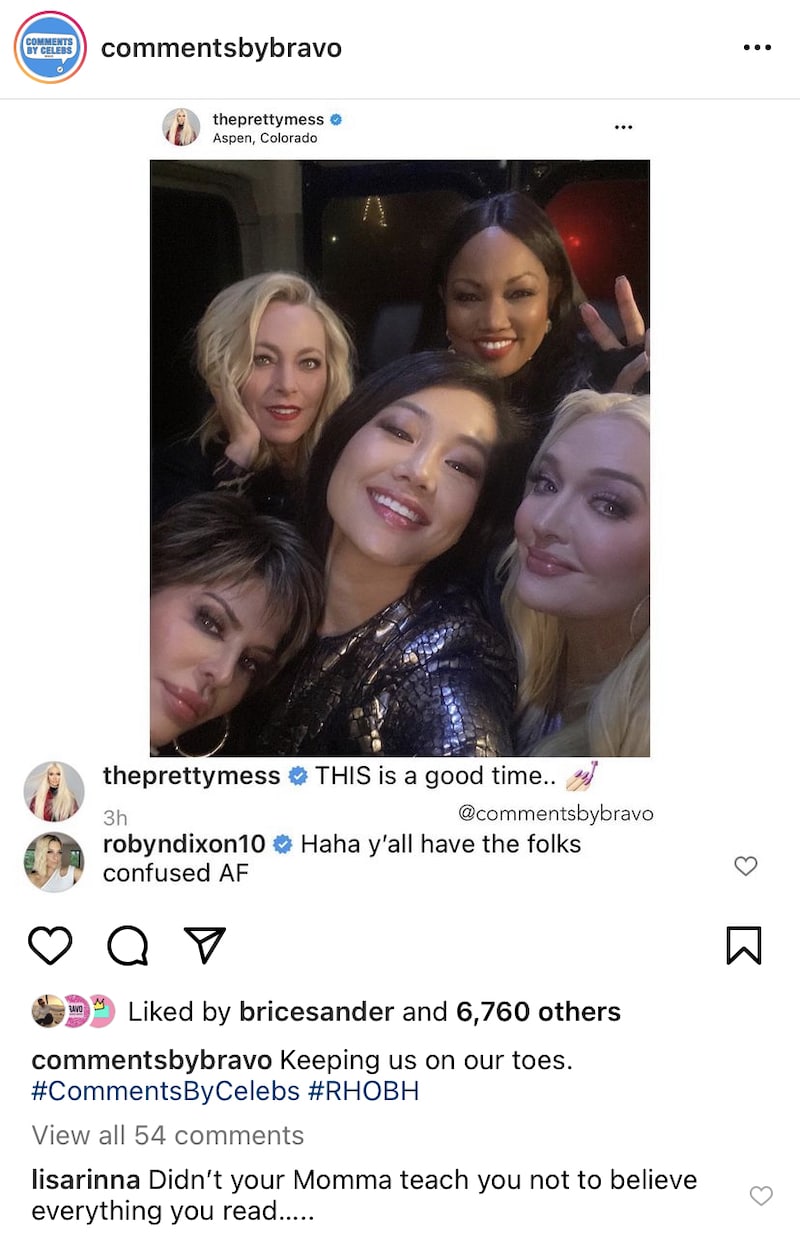 Erika and Lisa’s messages appeared to directly reference a number of swirling rumors that suggest the two of them suffered a falling out amid their cast trip to Aspen.

As RHOBH fans may have seen, the Queens of Bravo on Instagram shared a report over the weekend that suggested Lisa had told Erika she can’t self-medicate with pills and alcohol. They also suggested Lisa, not insinuating rehab, mentioned the idea of an “intervention” and noted that Lisa had established a better relationship with Garcelle and Sutton and could no longer defend Erika’s behavior.

The Real Housewives of Beverly Hills season 12 is expected to begin airing on Bravo sometime later this year.