RHONJ Recap: Jackie Learns Jennifer Tried to Get Dirt on Evan as Jennifer is Devastated Over Margaret Sharing Bill’s Affair, Plus Gia Confronts Uncle Joe For Trashing Her Dad 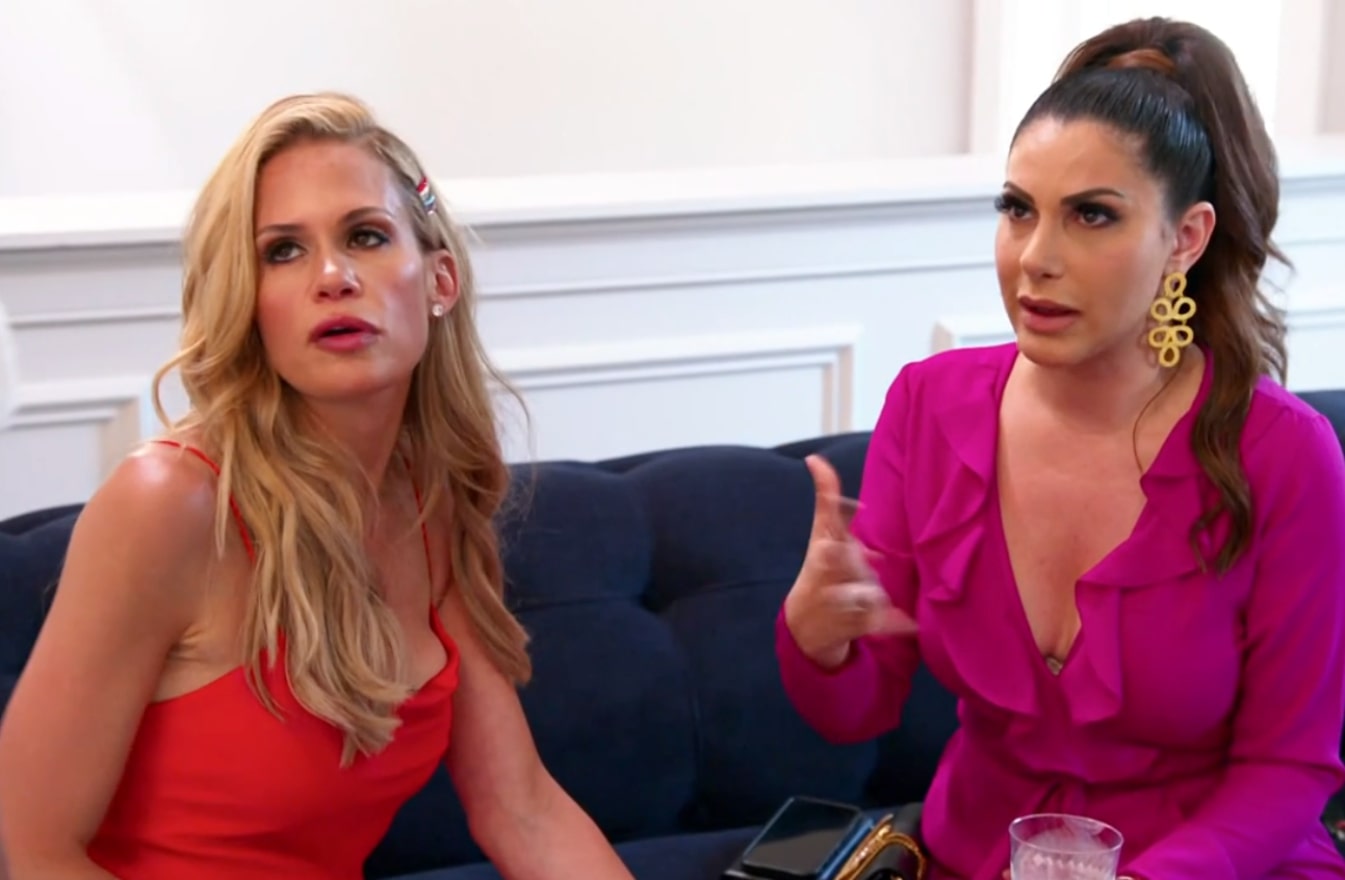 We are now back for more Real Housewives of New Jersey drama at Teresa’s cesspool party. Will Jennifer and Marge have a “come to Jesus” moment and put the past in the past? My bet is they will both take this one to the grave. Let us pick up where we left off, shall we?

Jennifer is now in the hot seat with Margaret, who is wearing an ugly fishtail pony, and she’s turning up the temperature and grilling her over Bill’s affair. Margaret claims to have known about Bill’s affair for years. She thinks that Jennifer pushed her over the edge, and she is going to allow the story to spill out of her leaky lips.

Jackie had heard the rumor from Margaret and was not going to spill it because she has seen what those rumors can cause. Dolores can recognize from Jennifer what has been disclosed. She has had a lot of experience with cheaters, specifically her ex — greasy Frank. Jennifer is willing to accept that Bill made a mistake. She has forgiven him and does not want the secret revealed. Margaret thinks that Jennifer is being a hypocrite. She is holding her feet to that darn fire again since Jennifer made a big issue out of Marge and Marge Sr.’s previous infidelities. Jackie is empathetic to Jennifer and wants to hold Bill responsible for putting his d*ck in someone else.

Bill comes over to Jennifer, and she is brought to tears. Jennifer wants to leave since she is upset over what was discussed. Teresa tries pathetically to compare this to what she did when she mentioned the rumor about Evan. She will never learn and will never take responsibility for her actions. Teresa, aka the biggest dolt, told this rumor to EVERYONE else but the person who needed to hear it. Margaret went to the person most directly affected by this rumor — albeit very spitefully.

Joe G. chats with the guys about liking Bill but not caring for Jennifer since she called him a crook online. Gia confronts her uncle Joe about being disrespectful to her dad. She acts snotty and accuses her uncle of being disrespectful to her. Joe thinks that Gia looks at him like the devil and cannot believe she spoke to him like that. Teresa, with her mouth hanging open, says nothing to Gia about how disrespectful she is being to her uncle. Side note: I swear I can see those little gears running in her head short-circuiting when she is trying to produce a thought. My parents would not care how old I was if I disrespected my elders, and they would have intervened ASAP, but we are in the dysfunctional world of the Giudices.

Melissa comes over to find out what upset Joe so much. She questions Gia about what happened, and Gia is smirking and Melissa tells her it is not a comical moment. She has been treated like an adult for her entire life since there were no other options in her home. Gia needs to take a seat now. Sweaty Louie, who is constantly chomping on his gum, runs out to see how Joe is doing. He does not want to be on camera allegedly, but he sure put himself front and center.

Gia follows her uncle outside to try to make up with him. She does not want an entourage following her outside . Joe tells Gia that he has been dealing with this for 20 years. He refuses to keep it in anymore. Gia wants him to stop bashing her dad. She needs to tell her dad to zip it too since he has also been throwing shade grenades. Gia admits it is a deep wound not only for her but her sisters. I sure hope she holds her dad’s feet to the fire since we all know he caused much of this discord.

Jennifer and Bill chat in the car about the affair rumors. She tells him how mortifying it was for her and she calls Marge a snake. Bill agrees with that assessment, and you can see he is troubled that this is out. The next day, while there is a party going on for Olivia, Bill stays upstairs since he is embarrassed. Teresa and Dolores come over for the party. Dolores commends Jennifer on how she managed herself. Teresa, in her ITM, is asked by a producer if she sees the similarity in what she did. She claims she said it was just repeating a rumor that she knew to be untrue — then why say it?

Jennifer shares how she discovered Bill was having an affair. She was nine months pregnant and saw the credit card receipt. Jennifer and Bill had a knockdown, drag-out fight, and she ended up having the baby the next day. She thinks the joy of having this baby brought them back together.

Jackie and Evan are having a going away party for their kids, who are just going to camp for 13 days. She hated sleepaway camp when she was a kid, and she was not welcomed by the other kids. Jackie thinks her kids are more well-adjusted than she was. She provided no surprising revelations to me since we can see she is still suffering from arrested development as an adult.

Margaret and Dolores meet up at a rug shop. She defends bringing up the affair rumor since Jennifer has been a hypocrite. Margaret cannot tolerate Jennifer both attacking her mom and also fishing for information on Evan. Jennifer tried to get pictures from Frank, and he said he did not have anything on this other woman. Dolores now has changed her feelings on this situation. She wants to invite everyone over to see her new townhouse. Dolores hopes that they can learn to coexist with each other. She better start praying then.

Jennifer has Jackie over to chat and try to mend their relationship. Jackie admits that she knew about the rumors and did not want to hurt another woman. She is adamant that she does not want any more backstabbing. Jackie defends Margaret and thought they both were on the defense. Jennifer did not tell anyone when Bill had his affair, and now, she must tell her kids about this. She must force Bill to face the music over what he did now since it is on freaking television.

LOL, Marge arrives at Dolores’s housewarming party, and she claims she is melting from the heat. I am so glad to hear that she acknowledges the condensation! Traci kind of just drops into this scene, and I do not really have a feel for her. I have been enlightened by some of the commenters on the timing of when she and Tiki got together. Dolores explains she needed this place since her house is unlivable. I really like the décor in her townhome, and she should just stay there.

Dolores is then asked about David, and she admits they have not seen each other. It sounds like he has been ghosting her. David does resemble a ghost since he has a translucent gleam to his skin.

Margaret mentions the video that Louie is in. She describes it as a camp where men go to vent their frustrations so they do not take it out on their significant others. Marge, the true crypt keeper, has clearly been appointed to be the bone carrier this season. Jennifer arrives and seems visibly upset and uncomfortable around this group. She will not enter the room where Marge is. Dolores tries to give Jennifer some tough love and tells her to suck it up just like she had to in the past.

Margaret sits down and questions Jennifer on why she is crying. She confronts Jennifer about looking up dirt about Evan. Jennifer asked Frank Catania about it since he knew the girl and might have access to photos. She acts like she was simply curious when she asked around about Evan. Jennifer really wanted to divert the attention away from her husband.

Jackie shuts down this conversation since she does not want anyone to mention her precious Evan and affair in the same sentence. She is really reacting strongly for a bullsh*t rumor. Jennifer claims she did it out of curiosity. Traci, in her ITM, can understand why Jennifer is so upset, and she cannot get why Melissa and Margaret do not have any sympathy. Teresa finally strolls in with an outfit that is way too short. We are briefly introduced to Caroline in this scene. She was also at the pool party, but not much is being disclosed about her just yet.

Teresa, of course, must bring up when she innocently mentioned the rumor about Evan. Dolores, in her ITM, can recognize that Teresa is looking for any reason to avoid accountability for what she did. Jennifer decides to leave since coming here has been a disaster. Dolores thinks that the curtain has come down on her perfect life and Bill has been exposed with his pants off!

Next week, Joe is facing the music from the Giudice girls. Happy Hump Day, everyone, and see you next week in Jersey!