RHONJ Recap: Teresa Accuses Margaret of Talking to Luis’ Exes Plus Gia Gets Involved in Mom’s Fight, and Jackie Breaks Down Over Eating Disorder 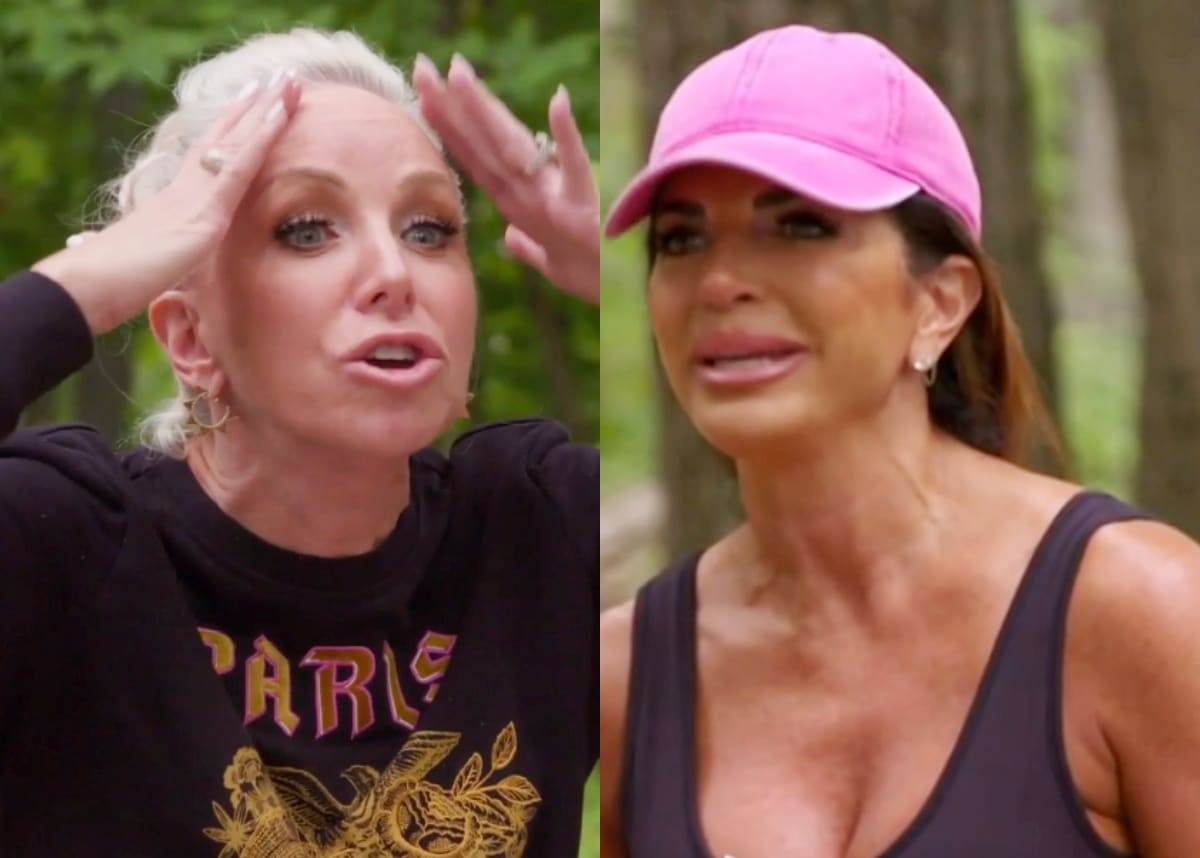 This week on the Real Housewives of New Jersey, we are returning to the woods to verbally/nonsensically spar over who will retain the title of HBIC of NJ! Let us pick up where we left off and hope someone got Traci down from that tightrope, shall we?

Margaret and Teresa are still going at it, and it is uglier than some of their looks this season. Teresa does not understand why Marge, aka the news, dug up something from 10 years ago. She alleges that Margaret is the “cause” of the Evan rumor. Teresa is really grasping to divert the attention from her precious Louie. She reminds me of a kid who is told by their parent they cannot date someone, and they continue to do it to spite their parents. Side note: I hope Teresa makes a full recovery from her appendectomy that Gia chose to share with the world. It was interesting how it was made clear that this was not a result of a cosmetic surgery. Is Louie hand feeding her pineapple and reading his love scroll to her while she recovers?

Marge thinks that Teresa is flexing so there is a diversion from the Louie talk. Jackie is sticking by her “friend” Marge and finds Teresa not credible. She has admitted that she is more afraid of Marge and is sticking with her during this kerfuffle.

Jennifer finally pipes up and admits she did call the gym at Teresa’s direction. She admits to being on the phone with Teresa prior, and she was fired up over the analogy about Gia. Teresa believes that Jackie should have stated that she was making an analogy. She really needs those flashcards because she can be a loggerhead. Dolores offers up that Teresa may have been able to grasp if you told her like she was in school, for example. She has learned from many years of friendship how to speak to a dolt.

Teresa tries to convince everyone that she is happy in her love bubble. She is all about love, love, love, and blathering on about her endless love story. Teresa is screeching in this hoarse voice, and my poor dog even had to leave the room. She now confronts Traci, who she just met five minutes ago, about the questioning of Louie. Traci looks perplexed when she is trying to decipher what Teresa is saying. She needs to know that Teresa is not stuttering. She always butchers the English language.

Teresa mentions the rumor about Traci and Tiki. Traci does play it cool and does not react to what she said. Teresa really should pay attention to this reaction. She does not want anyone to pop her oozing love bubble. Teresa resents the claims about Louie being an abuser and that Marge was “talking to the axis.” My Teresa translation: She really meant to say Marge put it in the universe. Marge reminds Teresa that Louie’s girlfriends are coming out and telling their stories and she is broadcasting them. Melissa is wondering why this group can find something to argue about even in the middle of the woods. She might also see the writing on the wall that she is no longer a central part of this storyline .

Teresa tells Melissa to watch her friends. Melissa recognizes that Teresa needs an exorcist — stat. After Teresa stomps around the woods huffing and puffing like King Kong, she remembers her product placement and drops everyone a swag bag of her workout wear. Melissa is glad that at least she and Jennifer made amends — for now. Dolores then invites the ladies to a charity softball game. She might want to rethink this since incorporating bats and balls into this group could be frankly dangerous.

Melissa and Joe are now talking about their final effort for a storyline Antonia’s sweet sixteen party. She is happier about this than Antonia is. Melissa then shares with Joe how Teresa lost her sh*t — again.

Teresa and her family are packing up since they are moving within a week. Can you imagine how much gaudy crap will be crammed into that moving truck? Gia, in her ITM, is sad they are selling their home since this is the only connection she had left of her dad in the States. Teresa tells Gia that Traci and Marge have put on blast all these false allegations. Gia wants to know who had her back, and she shares that Dolores was her soldier.

Dolores and Frank discuss the charity event she is planning to benefit breast cancer. She has a goal of $200k, and she hopes she can make it happen with this ragtag group of housewives. The softball game will be between RHONJ and the doctors. Teresa plans to sell her workout line at the game so she can allegedly donate the proceeds to charity.

Jackie is meeting up with her psychotherapist, Ilene. She is afraid of relinquishing control. Ilene probes her to find out what her true fears are. Jackie worries about the days that she will need to fake eat instead of dealing with her disorder. She can recognize that her problems came from her childhood when she was carrying extra weight. Jackie felt she had to keep up her eating habits since Evan fell in love with the thin Jackie. She thought she hid it well from her kids. Jackie is given a goal to try and enjoy some ice cream with her kids.

Jackie arrives home to her family, and she chats with Evan about how she managed her appointment. Evan remembers when Jackie would inquire if a restaurant served steamed vegetables and get concerned about staying over more than four nights on a vacation. He recognized that she could not manage juggling all the eating/pretending to eat that would need to be done. Jackie would like to be present for once for dinner. She asks Evan to throw out all her measuring spoons and hopes she can change her unhealthy behavior. Side note: This is some heartbreaking reality here and I wish Jackie nothing but the best in fighting this insidious disorder.

Jennifer and Bill are having a date night dinner. She shares with Bill that she made up with Melissa. Jennifer wants him to go to the charity softball game. Bill is noncommittal. Jennifer wants to know if they will make it another 19 years and Bill looks unsure. She finally admits that she is mad at him still. Bill thinks this affair should be left in the past. Jennifer is afraid if one person in a relationship checks out you are headed to divorce court. She is right, and it does not look good for the Aydins.

Marge and Lexi are planning a big birthday party for Marge Sr. She shares how Teresa texted her and asked her to wear her apparel line. Marge is irritated that she asked her and Traci to do it. She is going to ignore her request and punish her like Louie would — passively-aggressively.

We are now at Dolores’s softball game for charity against the Maimonides medical doctors. Dolores has done an impressive job organizing this. The ladies are getting ready in the locker room, but they are not interested in wearing Teresa’s line of athletic wear. Jackie thinks it is a guise to get them to wear her crap for a charity event.

Tre arrives with Gia and Louie and scans the room for her workout gear. Marge tells Teresa she is fine wearing what she has on, and Tre looks annoyed. Gia decides to jump in and comment that her mom always supports them. She is spreading her little wings trying to go up against Marge. Gia runs and tells her mom that Marge was bashing her.

Teresa does not know the difference between a touchdown and a home run, so we are off to a good start! Jackie, aka LVP, acts like she sucks at this since she does not like balls flying at her face. Joe G. thinks he is the biggest player there, and Frank hilariously reminds him of his size. Jennifer is up to bat, and she face-plants before she makes it to first base. Everyone is cringing because of her nose, but she is wearing a catcher’s helmet to protect her nose. Jen was so proud of her Louboutin red-bottomed sneakers and did not care that they were not practical for this game. Teresa now starts body-shaming Marge since her a*s is jiggling, and she attributes it to her not wearing her leggings. Nope, that has been going on all season despite shapewear.

Team Catania ends up catching up after being behind most of the game. Tiki finally arrives at the end of the game to save the day. Teresa acts like she is all is good with Tiki, and Traci seems really annoyed by it. Tiki dives for the winning catch, allowing Team Catania to win nine to six. Dolores is thrilled that they raised over $200,000 and there were no tears or casualties — this time!

Next week, Teresa is moving out of her “house of gaudy.” Bill and Joe G. are having a discussion and it does not go well. Happy Wednesday, Blurbers!