Home Real Housewives of New Jersey News RHONJ Finale Recap: Teresa and Margaret Attempt to Repair Friendship, Luis Asks for Joe’s Permission to Marry Teresa, Plus He Storms Off After His Past is Questioned Again

RHONJ Finale Recap: Teresa and Margaret Attempt to Repair Friendship, Luis Asks for Joe’s Permission to Marry Teresa, Plus He Storms Off After His Past is Questioned Again 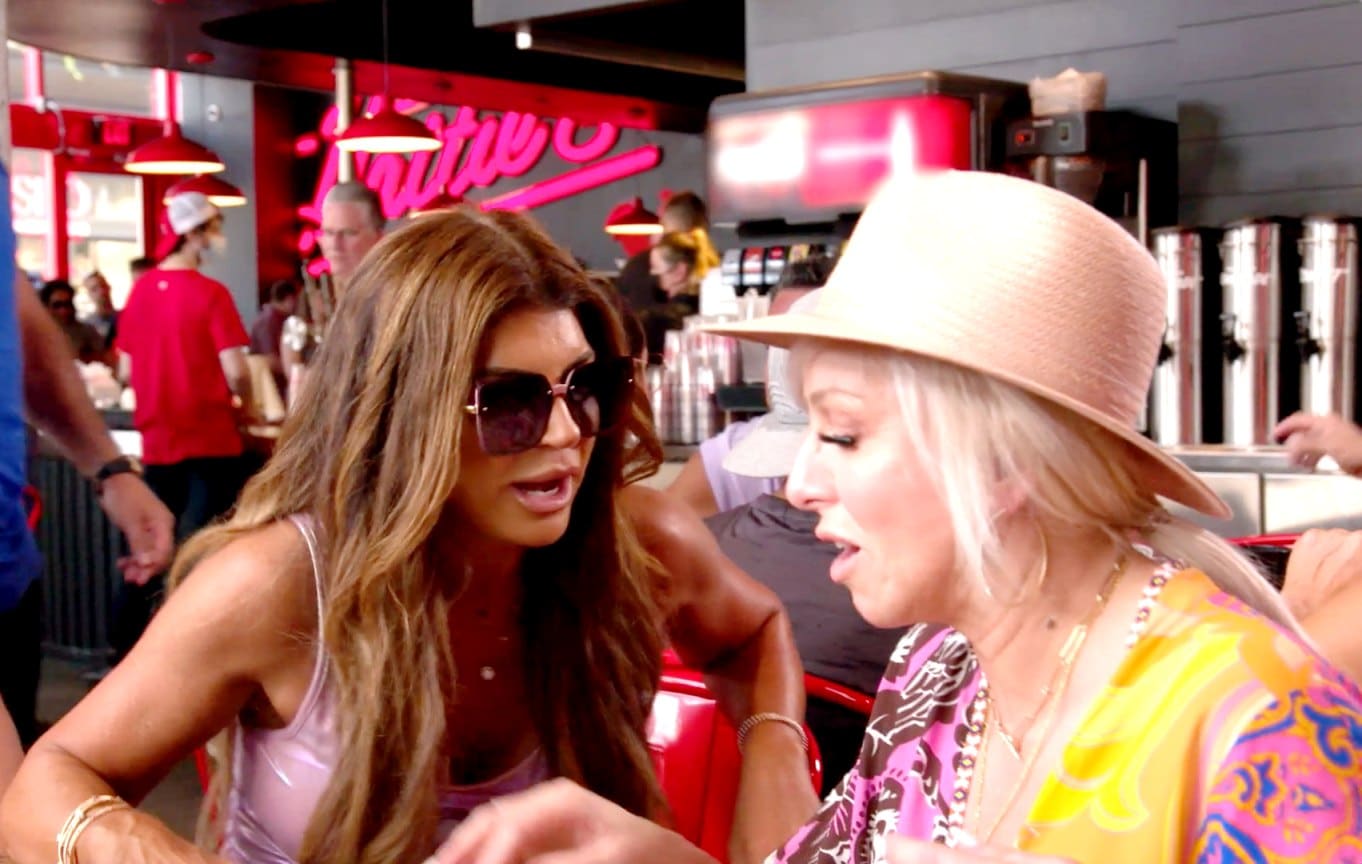 We are back in Nashville with the Real Housewives of New Jersey for the season finale. Will Marge and Teresa be able to overcome the damage that has been done to their relationship? Not happening — but let us watch them ride this Sprocket Rocket to the end, shall we?

The Jersey crew is so lucky to have a private chef to cook for them, which makes me really jealous. Melissa and Joe G. talk about how hot Teresa came in to literally ruin both nights of their trip. Jackie realizes that she has not eaten properly since Teresa’s behavior has been like a barbarian and has totally disrupted her goals for proper eating. She has an angel and a devil on her shoulder, and she is constantly battling to stay above water and keep her mindset.

Melissa and Joe chat with Teresa according to the script since she is in timeout at her hotel. Teresa has a headache since she did not eat very much, and it requires a lot of brainpower to run that blockhead. She believes she was nice last night, and she always apologizes from her hardened heart. Melissa is whining since Tre and Marge cannot be civil and this is taking away from her screen time. Teresa suggests Melissa straighten out her friend. She reminds us she is 49 years old, and that is frankly jarring to me since how has she made it this far in life?

Margaret thinks Teresa’s apology was nonsense, and she is annoyed that Joe Gorga wants to give his sister a participation trophy. She is willing, however, to congratulate Teresa for being the biggest jerk. Frank shares that he has owned massage parlors, and that should come as no surprise to anyone since that is his Tinder hook-up spot for unsuspecting victims. Marge cannot believe how Teresa came in with a bad attitude, and then for her brother to compliment her by saying it was a beautiful apology has rubbed salt in Marge’s wounds.

Marge considers Teresa dangerous, and she is befuddled that they see her behavior as normal. She resents Tre for fat-shaming her, and she is upset that no one defended her. Marge thinks enabling this behavior is not going to stop it. Dolores refutes that with they are not her parents and should remain silent like good Tre-stans. Side note: This reasoning is utter nonsense — who calls someone’s parents when an adult friend is acting out of control?

Jennifer wants Marge to take accountability since she asked a lot of questions. Is she really listening to the words coming out of her mouth right now and how absurd she sounds? Jennifer reminds Jackie that she chose to accept Teresa’s non-apology. Jackie admits she was fearful of what Teresa would produce next. Jennifer tries to get Jackie and the others to agree that her situation with Bill was similar to their rumors, but Jackie sees Evan’s rumor(s) as something Teresa fabricated.

Production has decided — not Dolores and Frank — that this motley crew needs to travel around Nashville on a bike while drinking, which requires the cooperation of all the participants. Margaret is wearing a dress with high heels to go biking. They are riding on a Sprocket Rocket where they all must pedal. Marge and Joe B. are going to sit in the back and let the rest of the crew pedal. Teresa walks up in her gaudy love, love, love shapewear. She strolls in with her flaming hot Louie like it is Groundhog Day and nothing has happened.

The Jersey crew arrives at Hattie B’s wing joint, and Melissa is already being an attention wh*re dancing in the street and mounting the other housewives. Jackie looks stricken when she looks at the menu and sees she has to make an effort to eat — she thinks that she is indulging since she is sharing creamy coleslaw with Traci.

Teresa decides to ruin another delicious meal by insisting she needs to talk to Margaret. She is expecting an apology from her for talking about her boyfriend. Teresa thinks she can just brush over the fact she dumped a table full of glasses on Marge and soiled her dress made from doilies. She says Marge’s questions have hurt her feelings and she wants to talk now. Margaret does not want to have this emotional conversation right now. Jennifer thinks it is nice that Teresa is taking initiative and trying to talk it out. Margaret admits she used to have a soft spot for Teresa after she lost her mom. Nothing is accomplished and Marge dismisses Tre with a wave of her hand.

The guys have spicy chicken wings to see who can survive eating the spiciest food. Bill seems to be the best at it since Jen shares that he spreads wasabi like it is butter. When I think Louie could not look any crispier he proves me wrong, and he literally jumps out of the spicy chicken fire before he ignites like a little b*tch. Evan does want to participate since he has no chance against Bill. Joe and Bill call it a tie, but I think Bill would have won it. Side note: I have really enjoyed Bill on this trip since he has been an active participant in all the activities and has tried to have fun.

Melissa is hammered when they get home and must take a nap. The guys are all hurting after eating all the spicy food. Teresa and Louie are staying at the Fairlane Hotel, which has a four-star rating on Tripadvisor, and she is still trying to remain within her oozing love bubble filled with a noxious blend of bodily fluids comingled with hair gel and tanning oil. We are then grossly treated to a clip of Joe G. vomiting in the bathroom from the spicy chicken. They decide to go in public again and further humiliate themselves at another unsuspecting restaurant. Tiki is joining the group tonight after having to work. Jennifer, who has really low expectations, thinks that Teresa was nice when she said hello to Marge.

Teresa arrives in her cowboy attire, and Louie is wearing a jacket with sequins down his spinal column. Joe and Louie go off to chat, and Louie thanks him for showing him kindness. Louie creepily claims to love Teresa and needs her, and he wants to take her to Europe to propose. He provides a disclaimer that he is not being controlling by saying he needs her. Louie is asking for Joe’s permission since her dad is no longer with them.

Joe decides to ask Louie the questions that have been asked of him all season. Louie shares that he got divorced at 35 and was broken or broke, whatever came first so he decided to pay it forward to unsuspecting women. He then blames all the “thirsty lowlifes” that he dated for all the negative press. Louie suspiciously gets less heated when a man questions him about his past than when a woman dares to. He admits that “he was not a crown of a man” — whatever the heck that means.

Louie states, “I take ownership for my behavior, however — BUT it wasn’t abusive.” He basically stalked Teresa at the Jersey Shore and found the most malleable victim ever. Louie had sleepless nights trying to manifest the perfect mark and he found that in Teresa. Joe is happy that Louie came to him asking for his sister’s hand in marriage — it made me vomit listening to him blather on about his endless love story.

Tre attributes her unruly behavior to the bad energy around her, which literally turns her into a raging troll doll. She and Marge finally talk with each other in somewhat of a civil manner. Marge tells Teresa that she put all her dirty laundry on the table before the tabloids could get a hold of it.

Teresa starts to break down and lets Marge know again that she does not care about the Louie rumors. She is hanging on to him for dear life since she is so afraid of losing this relationship. Marge thinks that she would rather lie to protect it. She questions Teresa, “Why would you ever think I would want to hurt you?” Teresa does not think that Marge was sincere in her approach to questioning her about Louie. Marge throws Teresa’s soldiers under the bus by telling her that Jen and Dolores had to lower their standards for Teresa’s choice of men.

Louie sees that the conversation is going south, and he swoops in and tells Tre that he can jet them out of here. He grossly brags that Teresa will never have to go to work since he will not let her leave their 15,000-square-ft. house unless he sends her shopping for sex toys. The rest of the group is now seeing Louie’s true colors when he starts profusely sweating and spitting and is acting agitated. Louie decides he cannot take the heat any longer since his golden goose is cooked, and he gives the housewife trademark exit line, “I’m done.” We then get our ending notes for the cast…

Teresa and Louie went to Greece on vacation and she will answer one question — yes, she will marry the love bomber.

Margaret is starting her own alcohol-free beverage line and will pop bottles instead of love bubbles.

Melissa really does not have much of an ending note other than she will be watching Antonia cheer from the sidelines instead of shouting over her friends.

Dolores moved out of her townhouse and back home with Frank and the kids — BIG MISTAKE. She has moved on to another project — her new boyfriend!

Jennifer and Bill continue to work on their marriage — Bill will be a better communicator and Jen will try to stop retaliating.

Jackie is making progress with her eating disorder with Evan’s support and is feeling healthier and happier.

WOW, what a crazy season, and I am so thankful to have you all to read my recaps! We have the reunion to look forward to next week, and it looks off the chain! Happy Hump Day, and see you next week for the explosive reunion!