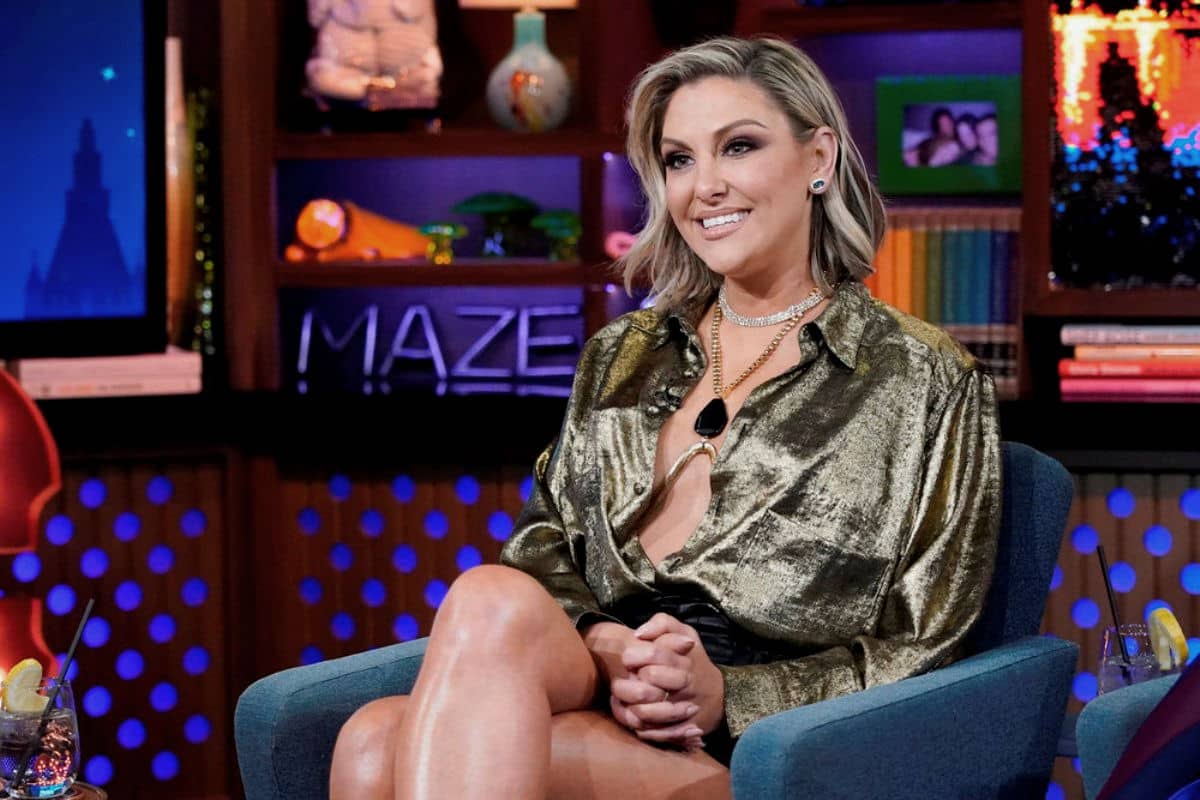 Is Alexis Bellino returning to The Real Housewives of Orange County for the series’ upcoming 17th season? Plus Gina Kirschenheiter is speaking out amid demotion rumors.

According to a series of new reports, a couple of major changes are happening behind the scenes of the Bravo reality series, including the apparent addition of Alexis as a returning cast member and the alleged demotion of a cast member.

“According to information that was sent to [Bravo and Cocktails], five of the Housewives from season 16 of RHOC have been asked to return, along with one former OC housewife, and 1-2 new cast members,” the Real Housewives Franchise shared on Instagram on May 7, noting that Gina will reportedly be demoted to a “friend” role for the new episodes.

As for the rest of the season 16 cast, including Heather Dubrow, Shannon Beador, Emily Simpson, Noella Bergener, and Dr. Jen Armstrong, they will all reportedly be returning to their full-time roles.

“The former OC housewife that is returning is rumored to be Alexis Bellino, who was on the show between seasons 5-8,” the outlet continued of the season 17 cast, noting that filming on the new scenes is expected to begin sometime in June.

While the rumors of Gina’s demotion gained steam as the weekend continued, she ultimately addressed the reports in a series of posts shared to social media.

First, after a fan wrote to her in a comment of a post, saying that they hope to see more of her friendship with Heather, Gina deemed the demotion reports as “rumors.”

“I hope the rumors aren’t true [because] I need you and [Heather’s] friendship and more trips between you,” the fan had said. 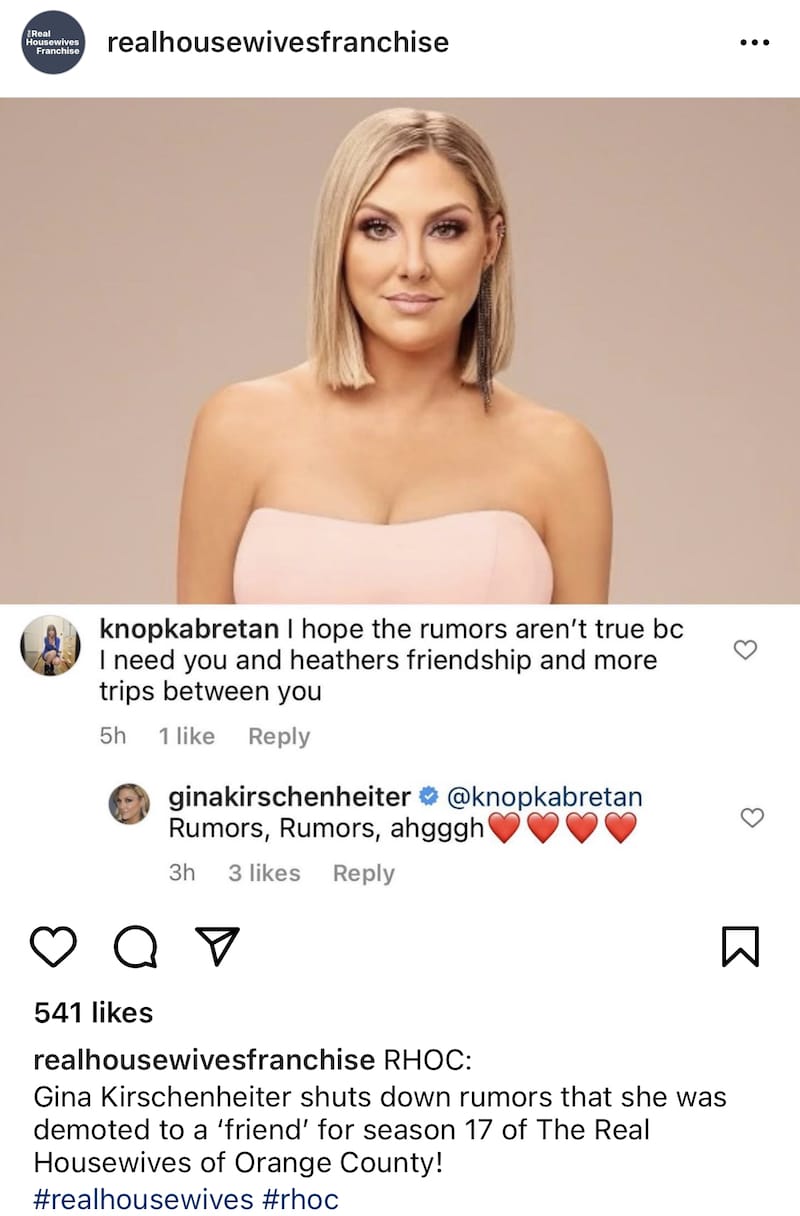 Another person wanted to know about the demotion reports and sent a direct message to Gina.

“Please tell me you weren’t demoted omfg,” the person said.

“Wasn’t demoted,“ Gina responded, along with a series of red heart emojis.

After hearing back from Gina, and receiving the confirmation that she has not been demoted, at least not to her knowledge, the fan proclaimed, “F-CK YES. Ilysm slay your day away queen.” 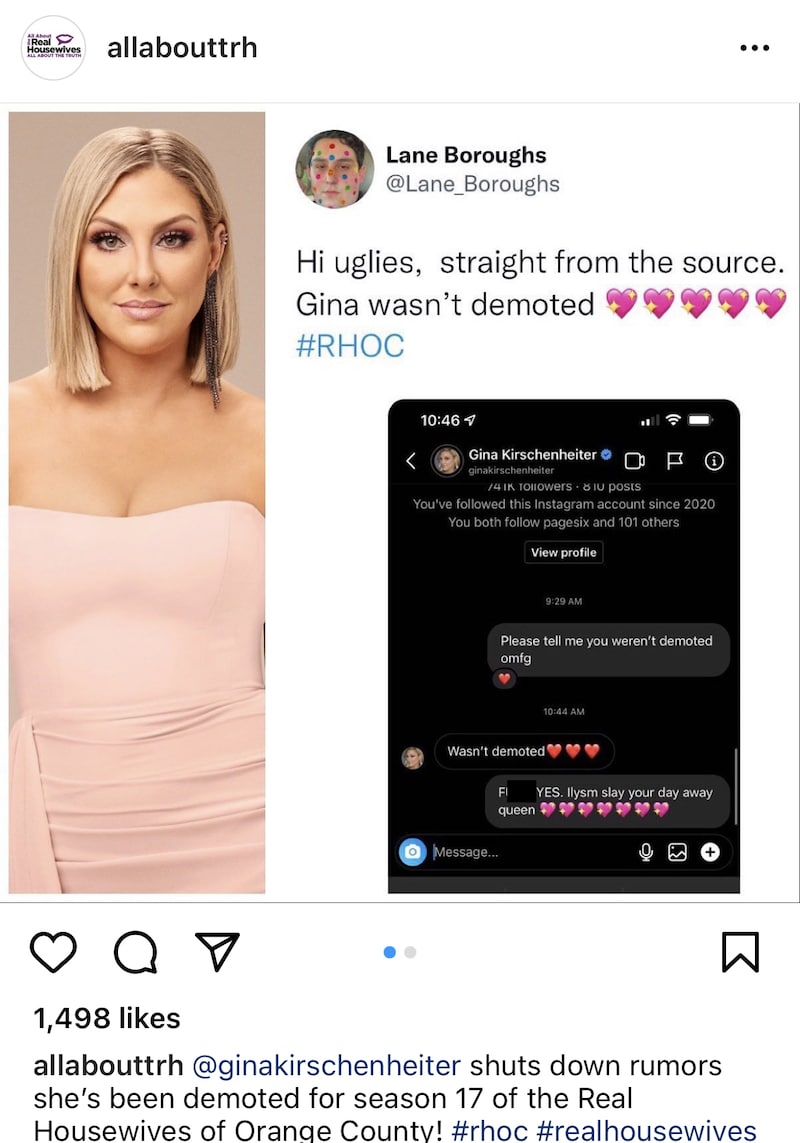