Home Real Housewives of Atlanta News RHOA Recap: Drew Cries as Tensions Rise Between Her and Ralph, Kandi and Todd Struggle to Find Balance at Home, Plus Sheree Finds Out Her Assistant is Trashing Her

RHOA Recap: Drew Cries as Tensions Rise Between Her and Ralph, Kandi and Todd Struggle to Find Balance at Home, Plus Sheree Finds Out Her Assistant is Trashing Her 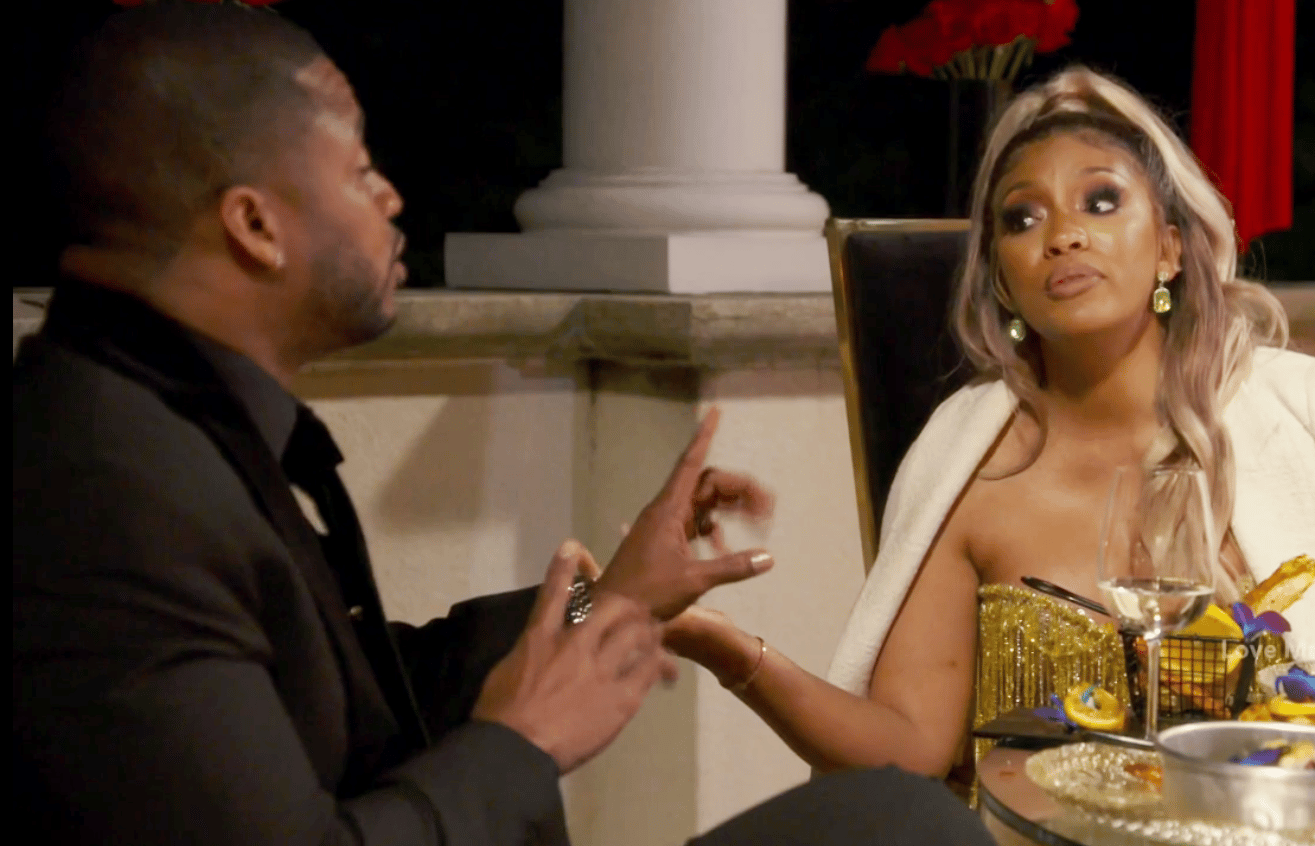 Let us roll up on Ralph’s Gaslight Express with him at the helm and Drew seated in the coach section this week on the Real Housewives of Atlanta. I must forewarn you — it is a very tame episode, but hold on till the end to see how Ralph could teach a master class on gaslighting, shall we?

Sanya is sharing more about her family life this week, and I could listen to her talk for hours. She shares her home with eight family members, and it must be a tight squeeze. Sanya just got some cookware delivered for Mama Sharon, who brought back some jerk sauce from Jamaica. Side note: If you have not been to Jamaica, I highly recommend it after being there four times, and especially try the jerk chicken/pork/fish.

Sanya’s sister Shari is her hair stylist, and who would not love that? Mama Sharon also brought back those delicious meat patties from Jamaica for everyone. She does not want to be told what to do, though, and she gets a little spicy with her daughters. Mama is a little firecracker, and she takes no nonsense, and you cannot go low on those patties, for God’s sake. Sanya would like her parents to stay since they are a huge help to her.

Sheree finally has her chateau, and Kenya comes over to see the competition. She has finally completed her gorgeous home, and I love her dog, Gotti. The basement, which is finally finished, looks like an elegant cocktail lounge complete with a massage room. Sheree is liking this happy Kenya since she is throwing out accolades about her home instead of nonstop shade. Marlo, however, is still throwing shade about Kenya’s white fridge and having to rent a Range Rover. Why is there shame in owning a white fridge? Inquiring minds want to know —is it because you have to pay more for other colors? Sheree calls Sanya to corroborate what Marlo said about Kenya.

Kenya cannot believe that Drew even got slammed over her chia pet treatment. She is being super shady in her ITM, saying all she needs to do is add some seeds and oil to grow her edges back. Kenya tells Sheree that her assistant Anthony has been sharing all her business with Drew. Anthony obviously has loose lips and is spilling the tea that Sheree does not pay her bills. I could tell in the scene he was in when he was fawning all over Kandi giving himself some screen time that the thirst is real for this poser. Kenya tells Sheree that Drew has enough mess in her own home with her husband. #Truth.

Drew has a personal chef and countless assistants, and I am left to ponder, where did all the money come from? They discuss the Kandi conversation about his assistant allegedly rubbing him down hiring a masseuse. Ralph decided to fire her and no longer will collaborate with her. He is double talking about this lady and shares that she is 50 years old and he would not bother with someone so old #rude. Ralph admits he has a lot of women around him . He is trying to get Drew to question her sanity. Production shows a few black and white scenes playing vaudeville music illustrating that point. Ralph wants Drew to come out and say get rid of her, and she will not do it. He admits that he does resent Drew for some of her actions.

Kandi is producing a new Broadway play called the Thoughts of a Colored Man. She asks Todd for his help since his absence is disrupting her flow. Kandi admits that they are not on the same page since she has taken on this project, and he is not involved in this decision. Todd has this condominium in Jersey since his ex did not pay it off when they broke up and he decided to keep it. Todd’s name is not on their house, and is anyone surprised at that? He does not like that Kandi did not even flip the mattress over when he moved in. I agree with Todd on that one — that is gross to sleep in a bed that was the prior guy’s bed.

In our next scene, Kandi has an insane costume on for her Halloween photoshoot, and it resembles a very creepy witch with a troll vibe. Kandi gives Marlo some kudos on doing the right thing and raising her nephews. Marlo wants the others to think she is dancing at Magic City, and that is where she has scored all of her coin. She wants Kandi to invite her and the boys over for a movie night. Kandi wants her to behave like a friend and she will extend an olive branch.

Marlo worries about indulging her nephews. Kandi assures her that it is OK to give those kids a good life. She makes a good point about how being Black should not always equate to struggle. Kandi does not want people to feel like they need help in pulling themselves out of the gutter. She believes that if you install a good work ethic in your children you can set them up for greatness. Sage advice from Kandi, who is a phenomenally successful woman.

Drew is doing her “Drop it with Drew” workout, and Anthony is there working and recording. Does anyone want to watch Drew pretend that she lost all her weight naturally from this exercise regime? Ralph wants Drew to keep her schedule clear to allow them some couple’s time. Side note: I suspect Ralph is guilty or he would not be planning something to get Drew off his scent.

Todd meets up with Ralph and Aaron at their Blaze restaurant, which I am surprised has survived during COVID. The guys discuss having kids and how busy their life is. Todd encourages Ralph to explain the text exchange between him and his assistant. Todd and Aaron (who I am loving so far) are giving him crap over his bullsh*t story. Ralph in his ITM is talking in circles and does not like Drew checking his phone. Side note: Are they trying to create an Atlanta version of the wolf pack from Jersey?

Marlo’s nephew, Michael, is going to homecoming. She decides to teach him how to slow dance and the poor kid looks mortified. Marlo remembers her youth being tough and foster care was her saving grace. She had a tumultuous youth, and she wants her nephews to feel safe and protected with her. Michael looks very handsome in his suit and Marlo is a proud “muntie.”

Ralph is having a special celebration for Drew, and she is wearing a very unflattering yellow skating costume, which makes swooshing noise when she clomps along like a Clydesdale in her heels. He sent a glam squad and picked out this outfit for her to wear, and that really makes me believe he despises her. Drew thinks she looks like Beyonce, but she needs a new mirror since there are NO similarities to Queen Bey.

Ralph is having this celebration in his tailor’s showroom. He has it all decorated with roses and candlelight. Ralph admits he can be an a*shole and is trying to show Drew she is more important than the Tampa babes.

Ralph launches into how he invests so much time in making Drew feel special. Drew can only focus on Ralph’s constant disappearing act, and she cannot take the extreme highs and lows anymore. She admits that she needs to lower her extreme expectations from Ralph, but honestly how long can you go?!?

Ralph then launches into his priority list, and everything becomes clear to me and Drew. He puts God, then Ralph who is God’s gift to women, Drew, kids, and everyone else — in that order. Ralph claims that he used to put himself last and he was a pleaser. Drew lets him know that she walks on eggshells around him and has suppressed her voice since his wrath is real.

Ralph gets annoyed by Drew’s take on their marital dysfunction and wants to leave the tough talks to the marriage counselor. He keeps reiterating that he set this night up with no expectations, and I find that hard to believe. Ralph then recommends that Drew see someone to learn how to speak to men appropriately. Drew throws back that he could use the same advice!

Ralph reminds Drew that she likes to shoot out zingers, and she retaliates that the counselor thought he was a maniac. Ralph resents that title since he is successful with lots of degrees on his wall. Drew, who has definitely been tumble dried by this douche-nozzle, googles what a maniac and gaslighting is just in case Ralph is unclear on their definition.

Drew leaves the table in tears but comes back for more abuse. Ralph thinks tonight was not the night to do this amount of stuff for Drew. He regrets his gesture and leaves the table in a huff. Drew is left eating alone wearing that ridiculous costume that Ralph got her to wear. She needs to at least eat the darn dessert after that mess of a night. Now we all know why this couple almost got a divorce over this texting scandal!

Next week, Sheree and Drew go at it, and Kenya has a birthday party for Brooklyn. I hope all the Blurbers who are moms had a fabulous and relaxing Mother’s Day!