Kyle Richards has sustained a back injury that has left her immobile.

After attending the MTV Movie and TV Awards last week with her Real Housewives of Beverly Hills castmates, including sister Kathy Hilton, Kyle took to her Instagram Story, where she shared a photo of herself from bed, where she was enjoying a tray full of food while watching something on her television.

“I hurt my back and cannot move,” Kyle captioned the post, via PEOPLE. “This is where I will be for the unforeseeable future.” 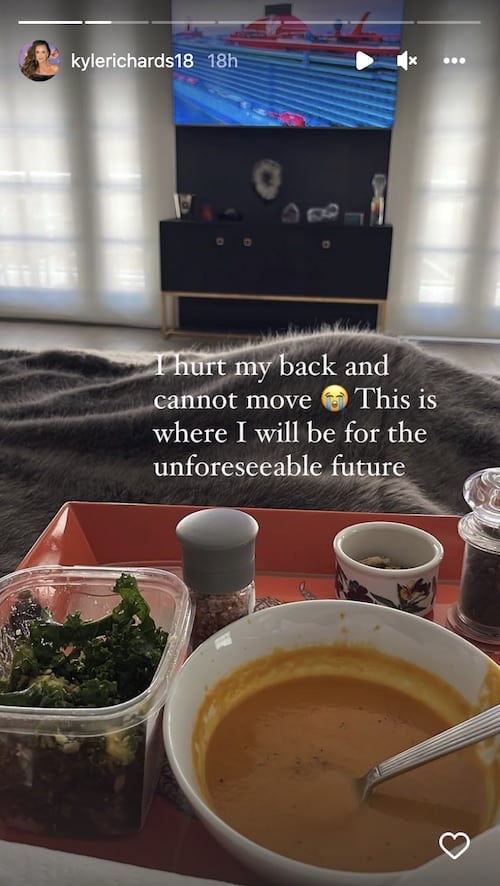 Prior to Kyle’s injury, her husband, Mauricio Umanksy, shared much better news on Instagram as he confirmed a new Agency office in The Netherlands.

“We’re global baby!” he revealed earlier this month. “The Agency launched its very first European franchise [The Agency Netherlands]. What a time we had celebrating at the [Pulitzer Amsterdam]. Thank you everyone for such a spectacular night!

Following the sharing of the post, Mauricio received congratulatory messages from his RHOBH co-stars and friends, Dorit and Paul “PK Kemsley.

“You have been global for years mate love you and congrats … Stay outta London don’t want to have to take you down,” added the always cheeky PK.

Mauricio also spoke of The Agency’s expansion to Europe in a press release.

“We’re thrilled to introduce The Agency brand overseas as we launch our first European franchise in The Netherlands,” he said. “Our partner Karina Nippérus is deeply respected throughout the local community, and we know she will be an incredible steward of our unique brand and culture. We are looking forward to announcing more franchise partners throughout Europe this year.”