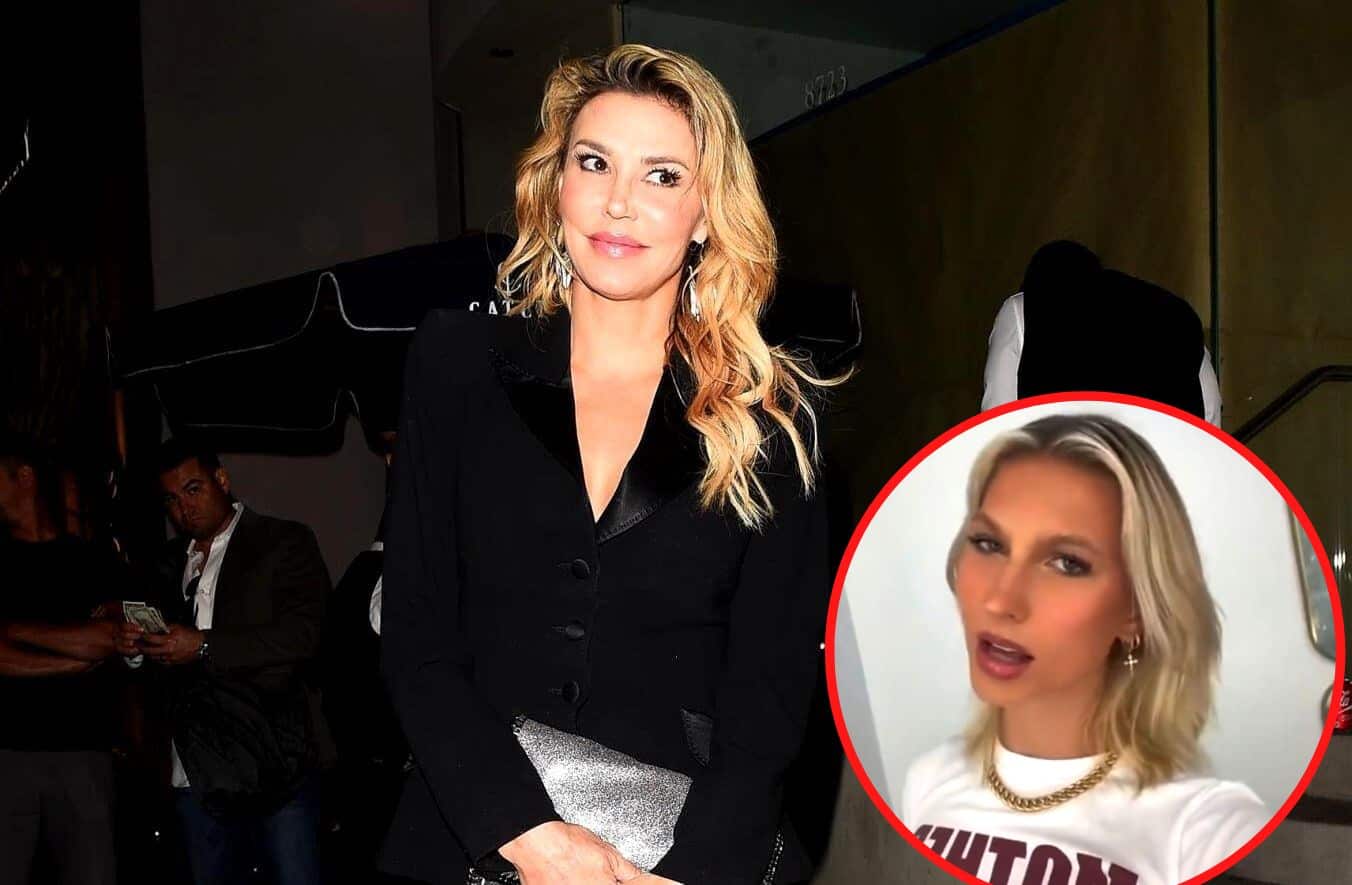 Brandi Glanville was allegedly caught going off on one of her son’s former girlfriends in a series of recently-leaked direct messages.

According to a report, the Real Housewives of Beverly Hills star berated an 18-year-old woman named Bella for supposedly toying with the emotions of Jake Cibrian or Mason Cibrian, who she shares with ex-husband Eddie Cibrian, before admitting that she was drinking and smoking at the time the messages were sent.

In a video shared to her TikTok page, Bella included Sabrina Carpenter‘s “Because I Liked a Boy,” which included the lyric, “All because I liked a boy. And all this for what?”

And, in the caption of her post, Bella wrote, “All because I dated the son of a Real House Wife of Beverly Hills.”

“Brandi Glanville [son’s] ex girlfriend posts text exchange where Brandi goes off on the girl for breaking up with her son. Then seemingly apologizes later,” Bravo Snark Side revealed to their fans and followers on Instagram on August 15. 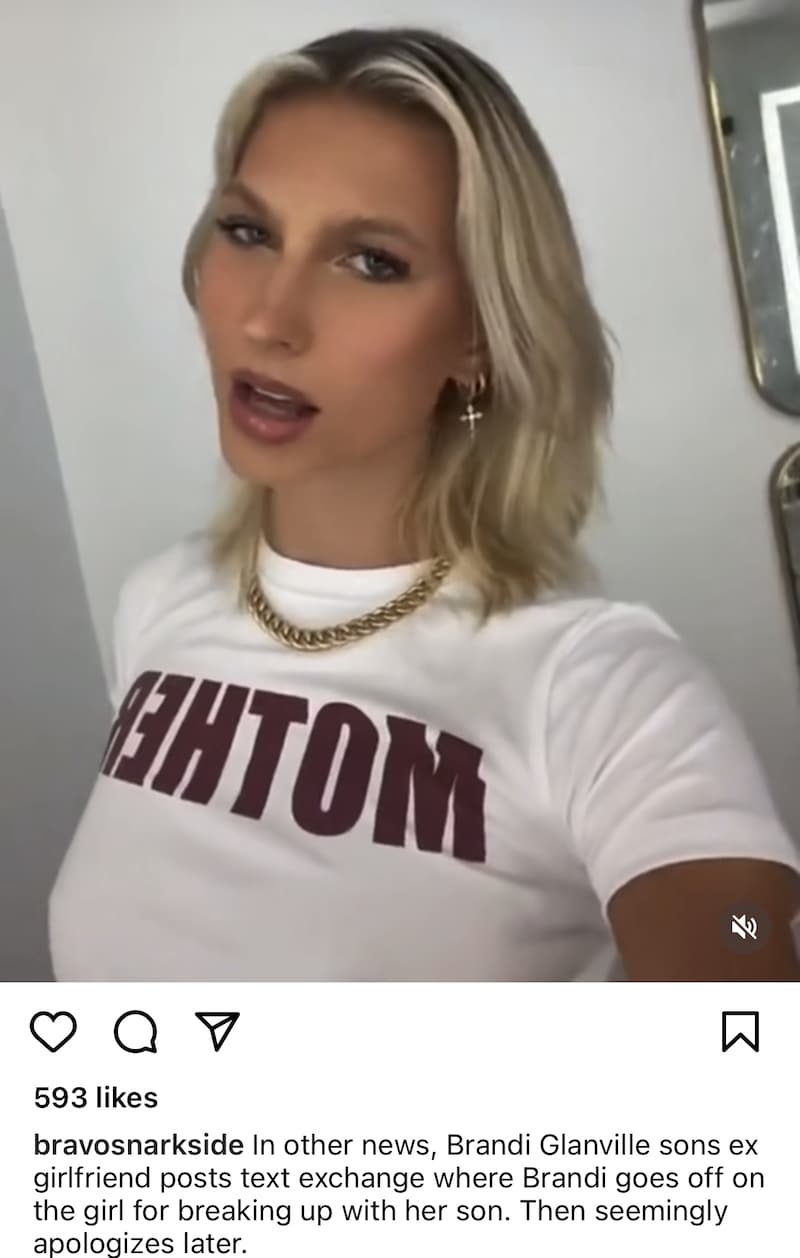 “Stop f-cking with [him] Bella!!! I’m not f-cking joking leave him alone and let him heal and stay in your own f-cking room. You don’t get to have your f-cking cake and eat it too you think you’re crazy??? You don’t wanna f-ck with my crazy,” Brandi had written in a message, likely in reference to her oldest son, Mason, who turned 19 in June.

But in response, Bella expressed confusion.

“I’m not sure what [he’s] been telling you but I have not been f-cking with him at all by any standards or means. I told [him] I wanted to completely remove myself from his life for a while so he can heal, and he begged me to [not] do that… I have also asked him many times if I am [allowed] in his room and every time he has said yes. He also told me he wants me around as a friend so all I’m doing is what he is telling me is best for him,” Bella explained, seemingly in a nod to Mason’s college dorm room. 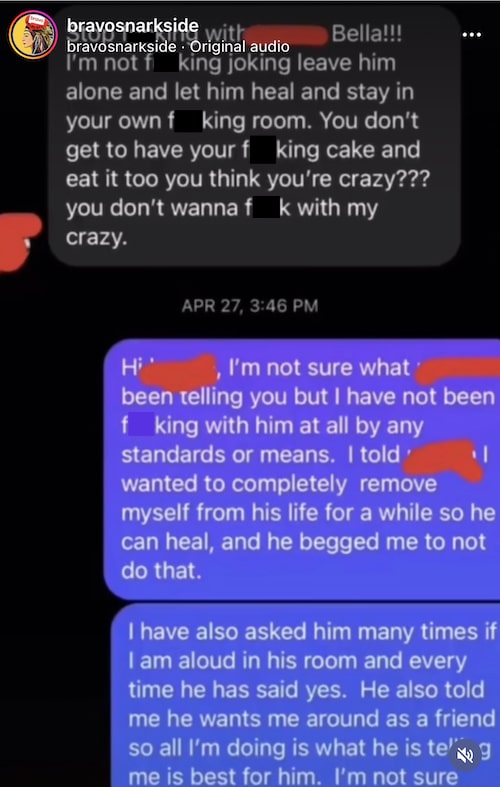 “I’m not sure what [he’s] telling you but I wouldn’t to anything to f-ck with [him],” Bella continued. “I’m not a bad person. People break up and that is just something he has to deal with, I’ve had to deal with it too and it hasn’t been easy for me either. But me breaking up with [him] does not make me a bad nor malicious person. I’m not crazy, I’m a very sane person actually so please don’t call me something I’m not. However, you Doing your son’s 18-year-old ex-girlfriend, and threatening her, is. It is also wildly inappropriate, please do not reach out to me like this again.”

She also attached a screenshot in which she was seen asking if she was allowed in the unnamed son’s room, to which he replied, “I already told you this [you’re] always [allowed] in my room Bella.” 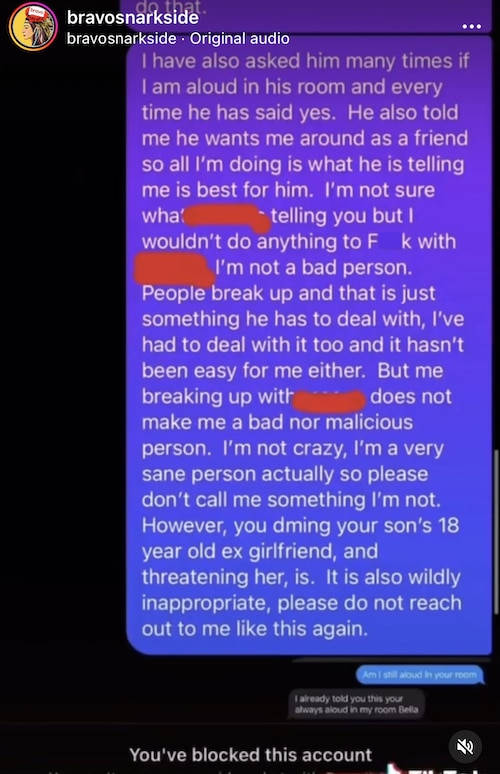 The screenshot went on to reveal that he had told Bella, “I genuinely don’t hold any resentment, you can come to my room whenever you want.”

Although he also admitted that he’s “not over” Bella, he told her she’s “always welcome” and added that he still wants her to be a “big part” of his life.

And after reading what Bella had said, and seeing what her screenshot revealed, the RHOBH alum offered her an apology, while confessing that she was drinking and smoking at the time she sent her message to her.

“I am so sorry I was so emotional yesterday and then I shouldn’t of been smoking and drinking at the same time,” Brandi shared. “I just hated seeing [him] so sad and I don’t even know what I wrote and I’m not gonna look I don’t know how to look anyway I’m so sorry please forgive me.” 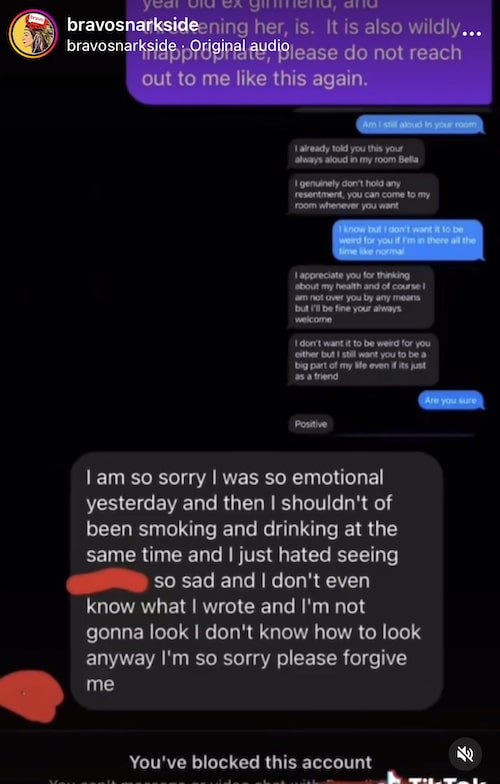 Brandi joined the Real Housewives of Beverly Hills as a “friend” during the series’ second season and was upgraded to a full-time position the following year. Then, amid season six, she began making cameo appearances.