Home Real Housewives of Beverly Hills News RHOBH Recap: Erika Admits She Doesn’t ‘Give a F**k’ About Victims & Lashes Out at Costars Amid Fight Over Her Refusal to Return $750K Earrings

RHOBH Recap: Erika Admits She Doesn’t ‘Give a F**k’ About Victims & Lashes Out at Costars Amid Fight Over Her Refusal to Return $750K Earrings 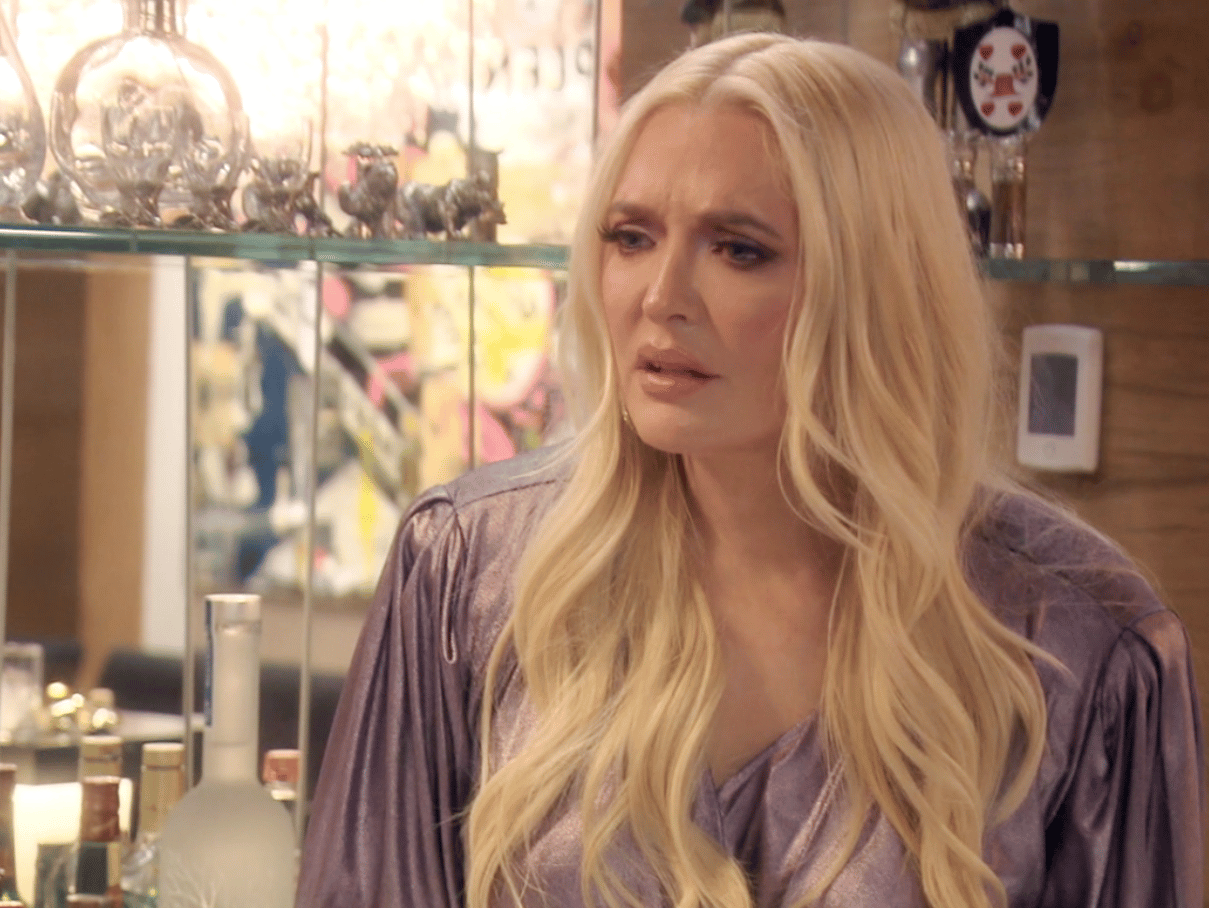 On this episode of the Real Housewives of Beverly Hills, we get to see just how Erika truly feels about her legal woes, and this time, no one can help dig her out of the hole she created…

The next morning, after the attack on Sutton, Kyle and Rinna discuss the unraveling of Diana, and you know things were bad when Rinna says, “Diana is out of control.” But Kyle and Rinna also feel like Sutton is not innocent in this fight. Kyle shares that she understands Sutton one on one, but when she is around the other ladies, she changes completely. Kyle calls Sutton a mean girl (guess it takes one to know one), but they hope their differences can be put aside for the remainder of the trip.

Sutton awakens with a new attitude on this new day. When asked about how she feels about Erika going snowmobiling with her today after yesterday’s incident, Sutton refers to Erika as a “non-friend,” which is pretty incredible.

Also pretty incredible is the fact that Kathy has to be woken up! Kyle tells Kathy during her wake-up call that at midnight, Dorit left the house and went over to Diana’s hotel. Dorit claims she felt uncomfortable (as she is suffering anxiety after the home invasion) and the hotel is very safe, but let’s be real… Dorit just likes nice hotels.

The day of wintery fun ensues. Some of the ladies are off to ski while Erika, Sheree, Sutton, and Garcelle prep for snowmobiling. Usually, this grouping would be a nonissue, but seeing how things were left off the night before between Sutton and Erika, things could get dicey.

Dorit explains that she is the only one who hasn’t been on skis in 20 years, and she hopes she doesn’t hurt herself. When Diana hops in the van to ski, she states that she tried to be civilized for some time last night. Riiight.

The snowmobiling van is beyond awkward (and silent), but luckily once they arrive and get moving, there is little chance to chat. I just hope Sutton stays far away from Erika when she is maneuvering that weapon… I mean snowmobile.

In the meantime, Diana huffs and puffs up the mountain and blames the altitude. Mauricio joins the ladies (WHY), and Dorit bemoans the fact that she decided to come aboard to ski. Maybe it’s like riding a bike and it’ll come back to her?? After a few runs, the skiers sit down for some after-slope snacks. Dorit EVENTUALLY joins the group after she brushes herself off from falling down the mountain one too many times.

Over some post-snowmobiling drinks, Sutton explains that she didn’t even do anything to Diana to cause that type of behavior from her. Sutton further states that she doesn’t care if Diana likes her or not. Garcelle applauds Sutton’s strength and reminds Sutton that she can’t force Diana to receive all the apologies she has given time and time again. Erika explains that it seems as though Sutton’s apologies are not authentic, which is hilarious coming from HER, but she knows Sutton is coming from a good place deep down.

Sutton states that she will sit as far away as possible from Diana and that she would rather sit next to Erika than Diana any day. This causes both ladies to chuckle, and it’s evident that Erika and Sutton really could be friends if they put their differences aside… let’s just hope it happens sooner rather than later.

Later, the group gets ready for dinner, and Garcelle checks in with Crystal. Crystal is happy to learn that Erika and Sutton got along okay during the outing, but Garcelle just can’t shake a certain feeling. The whole Erika earring thing is eating away at Garcelle, and she lets Crystal know that the article is EVERYWHERE. Oh, and don’t forget that Garcelle’s highly televised talk show addressed this topic. The show is not going to air until after the Aspen trip, but Garcelle still feels a little uncomfortable about the whole thing. In fact, Garcelle keeps checking to see if Erika is actually wearing the infamous $750,000 earrings on this very trip…

Mauricio tags along for dinner (at a restaurant that Erika used to come to with Tom… OF COURSE), and everyone seems to be in a great mood, so you know what that means. It’s only a matter of time before Kyle starts stirring, but Erika digs her own hole. She begins showing off her expensive things to Garcelle. Garcelle feels strongly that this is not a good look, and so she takes this opportunity to question Erika about the earrings. And trust me, Garcelle is asking all the questions we are asking.

Erika corrects Garcelle and tells her that the total value of the earrings is $1.3 million (okay, that makes it WORSE), and Garcelle asks Erika, “Do you have them? Do you wanna give them away?” Erika Jayne believes that she should only give those earrings away if the judge says she should. Garcelle reminds Erika that people are suffering and are owed money, but Erika believes that this is a legal matter, and if she owes, as decided by a court, THEN she will handle the issues. Garcelle ponders if the earrings are stolen, and after watching how defensive and ugly Erika got about the whole situation, Garcelle really does not want to give Erika a heads up about what she talked about on The Real.

Post dinner, the ladies roll up to the Aspen rental and immediately attack the bar while Rinna passes around some edibles. Kathy does a PSA about the only tequila she does not find disgusting, Casa Del Sol, and she has been pushing this tequila even though the women have no interest.

In the meantime, Garcelle fills Dorit, Diana, and Crystal in about the earrings convo she had with Erika during dinner. Diana believes that Erika should simply take out those earrings and donate them to the victims that need the money. Before the conversation goes any further, Diana calls Erika over, and Erika jumps right in on the defensive.

Erika explains she is not going to do something that is not required of her under the law. She further states that there is nothing else that she wants to do outside of the law. Except Erika was asked to return the earrings, and her refusal to do so is what triggered the case being brought before a judge, who has since ruled that the earrings should be returned. However, despite claiming she would follow the law, Erika appealed the judge’s ruling to return the earrings. As of the latest ruling, those earrings are now set to be auctioned off with the proceeds going to the victims.

Erika tells Crystal that the law is precedent, but these ladies aren’t backing down. Garcelle tests Erika and states that perhaps SHE does not want to return the earrings for fear it would make her LOOK guilty, but Erika scoffs at this. She retorts, “There is a place to make people whole, and it is in a court of law, not in a court of public opinion.”

Crystal cannot fathom how Erika can’t do the right thing and show some care about the victims. Erika claims to understand that people have passed away and that we must figure out what happened to the money they are due. She also states that this is a civil lawsuit, and this is not an issue of criminality.

Erika refers to the people as “potential victims,” and her refusal to give anything back is incredible. According to Erika, just because someone said something does not mean it is true. Crystal tells Erika that all she can think about are the victims, and to that, Erika retorts, “I don’t give a f*ck about anybody else but me.” WHOA.

Rinna realizes it’s time to protect her BFF rather than tell her she is in the wrong. Rinna and Dorit decide their fellow Fox Force Five member Erika needs to be removed from the situation. As Erika is escorted out, she yells for all to hear, “Let it play out in the court of law.” And that, my friends, is how you make an exit.