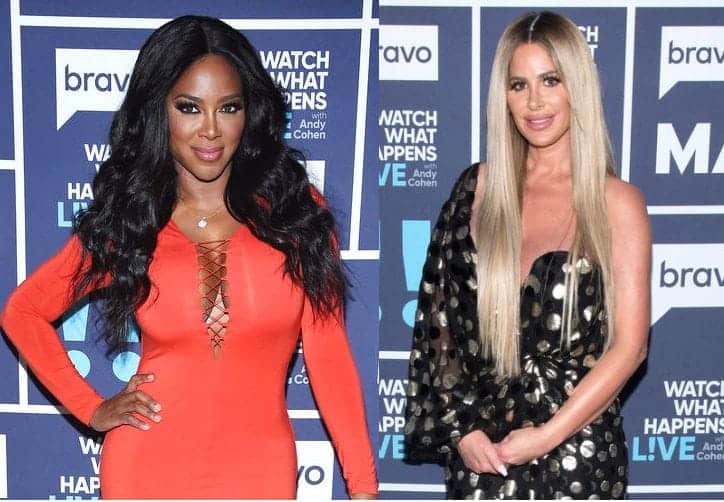 Real Housewives of Atlanta viewers saw Kenya Moore and Kim Zolciak getting into a major blowout fight on the most recent episode of the show with Kim even trying to physically attack Kenya!

Unfortunately things aren’t much better between the ladies in real life, as they also engaged in a Twitter war following the airing of Sunday night’s episode.

First Kenya slammed Kim for poking fun at her fertility issues on the show. Kim made some nasty remarks about Kenya trying to have kids at the age of 46. As reported, Kenya is currently undergoing IVF in an attempt to have kids with her new husband Marc Daly.

Kenya tweeted, “What a nasty woman @Kimzolciak is to talk about another woman’s eggs and journey to have a baby. #trash #rhoa”.

She later added, “@Kimzolciak screwed #bigpoppa —a married man for years but she’s worried about my husband and my life. Worry about your husband not mine #trashbox #rhoa”.

For the non RHOA OG fans, “Big Poppa” was a married man Kim used to “date” during the first season of RHOA. He never appeared on the show but was referenced many times with Kim bragging about the things he did for her such as buying her a new luxury car.  Kim claimed Big Poppa was separated from his wife but his identity was revealed in real life and it turned out he was still married and living with his wife.

It seemed Kenya hit a sore spot as Kim proceeded to clap back.

Kim tweeted, “Sweetie Ive been married 6 yrs move on… BUT you call your man “baby” to try and be like me, you have a white Bentley that I had YEARS ago to be like me! Remember Sweetie Im on 2 shows and you aren’t even on one!! #Fired”.

Kim is referencing the rumors that Bravo is planning to fire Kenya after this season due to her husband refusing to film.

Kenya of course responded, this time around going for the jugular by slamming Kim’s plastic surgery! In Kenya’s defense, Kim and her daughter Brielle have both made references to Kenya being ‘ugly’.  Must say Kenya is a lot of things, good and bad, but ugly ain’t one of them!

Kenya posted a side by side photo of herself and Kim with the caption, “Now watching #MissUniverso2017 you know that BEAUTY pageant I was top 6 in after winning #MissUSA…But I’m ugly” ? #originalface VS. #surgeryface #realbeauty #fakenews.”

Nene Leakes also got in on the fun when she called Kim a hater and shared a photo of Kim making a face during the all white party at her home.

The face of a hater! She couldn’t take it! She complained & complained! Attitude was horrible while everybody was trying to be nice to her! But yet she’s sooooo positive! They are literally the only ones that can have a nice house! Girl BYE pic.twitter.com/5ApvruJxaT

Kim responded with her own photo of herself laughing with Nene and denied hating or having a bad attitude!

Does this look like the face of someone with a terrible attitude? I’ll let you guys be the judge. Also I have been drinking out of solo cups for years even at my OWN house! We'll let karma deal with this character. Not even worth my damn time. DONT BE TARDY this Friday @ 9pm EST #TheBlessedDontBeefWithTheMiserable #TooBlessedToBeStressed #TooBookedToBeBitching #NothingButSmiles #ReturnToSender #LivingMYBestLife #RedCupsMatchMyRedBottoms