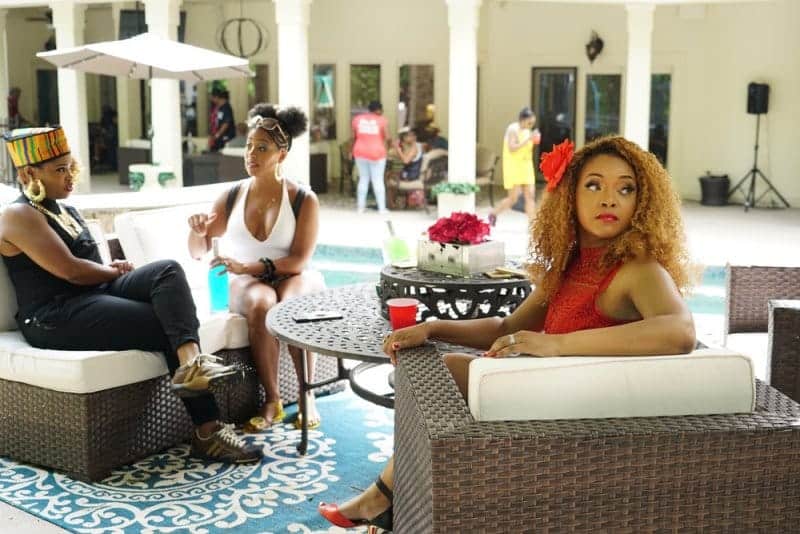 The ladies of Married to Medicine have a lot on their plates these days. Not only are many of them juggling full patient loads and the demands of motherhood and marriage, many of their relationships are on unsteady ground.

When we picked up with the ladies last night, they were still mid-fight, and mid-ruining Contessa’s 90s party.

Dr. Simone had started off trying to explain to Mariah how shady her treatment of Dr. Heavenly had been at her Mothers Day party, and the ladies began taking sides…mostly Dr. Heavenly’s…and a screaming match ensued.

Their host, Dr. Contessa, a new member of this group, was a bit put off by the ladies’ behavior. She was also still reeling from her own argument with her nanny, Miss Renee (who recently dissed Contessa and called her a liar) and ultimately announced that the party was coming to a close, and everybody needed to leave.

Dr. Contessa and her husband, Dr. Scott are at their limit with Miss Renee’s nonsense. We’ve seen her be insubordinate, and even down right disrespectful, but she crossed the line in a major way when she actually threw something at Dr. Contessa, as the party was about to start. And all because Dr. Contessa asked her to feed the kids!

During Dr. Contessa’s conversation with her husband, it was revealed that they have been dealing with this behavior from Miss Renee for YEARS, and that while it had always blown over in the past, it looked like this time Miss Renee has quit for good. This leaves Contessa and her family in a pretty precarious situation, since they have two small children, who are used to a full time care giver, who is more like a grandmother to them than an employee.

Contessa was left feeling guilty and defeated as she tried to carry out her obligations to her children and her patients, and worried that she wasn’t giving her best to either.

Dr. Simone was also feeling a little guilty because some of the blame for the big fight between Mariah and Dr. Heavenly was on her shoulders, since she was to one who confronted Mariah in the first place.

In an effort to smooth things over for everyone, Dr. Simone invited Mariah out to lunch so they could talk through their issues. It went pretty well. Of course, that’s all relative when dealing with Mariah, who refuses to take responsibility for her part in the rift with the rest of the ladies.

Dr. Simone pointed out that when they were all in New Orleans, Mariah had had a lot to say about forgiving the others, but didn’t seem to have considered that they had plenty to forgive too. Mariah plead ignorance, claiming she had no idea why the ladies would have a reason to be angry with her, but Dr. Simone was quick to point out that she had spoken about every single one of the other  ladies behind their backs, and quite viciously.

In the end, Mariah was forced to concede that she could have handled things better, and she and Dr. Simone agree to try to move forward as friends. But Dr. Simone was still a bit skeptical, as moving on has never really been Mariah’s strong suit.

Dr. Simone is also trying to move on from some of her issues with her husband, Cecil. The two have virtually been living separate lives this season, with Simone staying in one of their homes, and Cecil staying in the other with their sons. This is supposed to be a situation of convenience for their family, but could they be getting too comfortable being apart?

The couple recently had a pretty nasty blowup concerning their finances. Cecil took $25,000 from their joint account, and Simone was not only angry, she was suspicious. Fortunately, Cecil’s intentions with the money were altruistic. He was making an investment to launch an app for kids.

Cecil works in IT, and is concerned with the security of his job, amid massive layoffs throughout his company. Dr. Simone assured him that she understood, and that they were in it together, but also cautioned him to be more honest and forthcoming about his concerns (and their money) in the future.

Money woes revealed some of the cracks in Toya’s marriage with Dr. Eugene, as well. The two are finally getting out from underneath their massive tax debt, but the stress, and Dr. Eugene’s extra hours at the hospital have all but killed their sex life. Toya has been trying to spice things up, and to that end, she went shopping with Quad for some sexy lingerie and toys. But alas, it turns out that Dr. Euguene just isn’t all that spicy.

Quad and Dr. Greg have been pretty chilly with each other lately too. They’ve been arguing a lot, and Quad is tired of feeling unappreciated and alone in her marriage. For his part, Dr. Greg is tired of Quad’s vague complaints, and insists that he does appreciate her, and would do better, if only he knew specifically what she wanted him to do.

The two have been to marriage counseling in the past, but didn’t feel it was helpful. Instead, they put together a “marriage focus group” with two other couples, that allows them to openly discuss their issues without fear of judgement. So…basically marriage counseling, but with amateurs, who have their own problems. Brilliant!

Anyway, the focus group met in last night’s episode, and the assessment from the other couples seemed to be that Quad and Dr. Greg aren’t “friends” to each other  anymore, and that Quad needs to let Greg know exactly what she needs from him.

The source of a lot of the malcontent among the couples seems to be the demise of Dr. Jackie and Curtis’s marriage. This was the couple that all of the other couples looked up to, and when it was revealed that Curtis had been cheating, no one could believe it.

Curtis is trying to work his way beck, and regain Jackie’s trust, but that may take a lot longer than he thought. The two had a second face to face meeting last night at their home, and just like last time Jackie kept things short.

After changing a lightbulb, and setting up the dinner he brought, Curtis only got to take about two bites before Jackie told him that she needed to get back to work. He seemed disappointed, but I imagine Dr. Jackie was pretty disappointed to see his affair all over the gossip blogs, too, so it’s difficult to be sympathetic.

He also might get better results if he would stop saying that Jackie “isn’t the only one hurting”. That may be true, but Curtis was the only one cheating, so… But you can click here if you want to know whether or not Jackie and Curtis got back together.

Stay tuned for next weeks’s episode. Mariah and Dr. Heavenly are going to another stab at talking things out, and with these two, let’s just hope it isn’t literally.