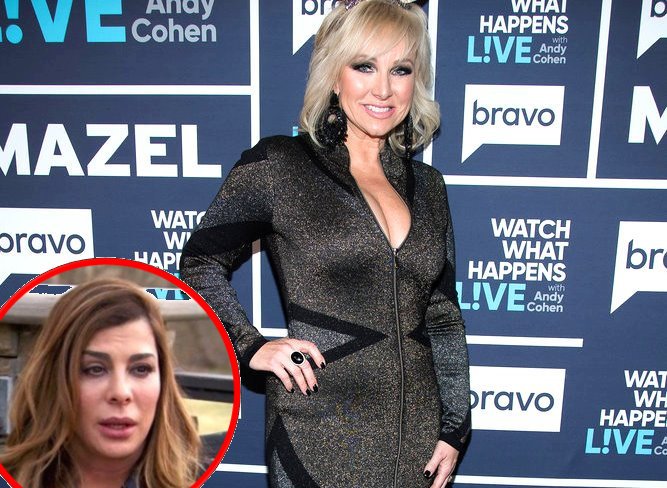 Real Housewives of New Jersey star Margaret Josephs is arguably a fan favorite despite just joining the show this season. A fact that has reportedly been driving her nemesis Siggy Flicker nuts.

In a new interview, Margaret is opening up about a number of topics including the recent reports that her $1.4 million New Jersey mansion is under foreclosure (Siggy recently stated the foreclosure was due to karma). She also gives an update on the status of her relationship with her estranged step-kids, plus dishes on her feud with Siggy and being called anti-Semitic.

On Reports Her Home Is In Foreclosure –

“I had a very bad lawsuit which did come out on the show. And you know, they were attaching a lien onto my house. So that’s really what was coming out. You know, we’re clearing up that lawsuit. I’ll still be living here and everything else. Business lawsuits are very common especially in our industry. Copyright infringement is extremely common in our business. And you know by [Siggy] saying ‘she’s a thief,’ it’s nothing remotely like that… But it’s not a big deal. It’s being fixed.”

On Her Feud With Siggy –

“I’m not apologizing anymore. I did my apologizing and it was all sincere and she wouldn’t accept it, and I’m done. You know, I don’t even want to mention her name. I’m like who? Siggy who? You know what I say is insecurity breeds insanity. And I think that’s what we were dealing with here. It’s unfortunate.”

Thoughts on Siggy Leaving the RHONJ –

“I say reality TV isn’t for everybody. And I think this year she showed her true colors. I mean I wish her well. I want her to be okay. It obviously wasn’t for her. She was having a public meltdown and I felt bad for her. And I just want her to be able to move on. I don’t want to see any woman fall apart… She just could not take the Marge.”

On Who She’s Closest To On RHONJ –

“Obviously Danielle [Staub] because we are together all the time. But also I love Melissa [Gorga] and Teresa [Giudice]. They are fabulous, and Danielle and I get to spend time with them. But you know, Danielle and I live around the corner from each other so it’s very easy to be together everyday for coffee and talking.”

On Status Of Her Relationship With Her Step-kids –

“We’re in a healing process. When I said they don’t speak to me,  it’s we’re not the same as we used to be. We haven’t had holidays together. We’re not in each others lives everyday. We text message each other. It’s not like they’ve cut me out completely but it just wasn’t the same. Our family is in the healing process. We still are in contact with each other but it’s just not the same. But we’re definitely in a better place than we were so things are moving in the right direction.”

On Siggy Calling Her Anti-Semitic –

“It rolled right off her tongue. She was plotting it. She was trying to plot my demise. She thought ‘Okay, I’m going to get her. Everybody’s going to go against her.’  She thought she could rally everybody against me and that’s not what happened. It actually did the exact opposite. Everything that she wanted to do backfired on her.”

Most RHONJ fans would definitely agree with the sentiment that Siggy’s attempts to make Margaret look bad have repeatedly backfired. As for Margaret, her comments about the reported foreclosure are interesting as she attempts to  try to deny it while admitting there is a lien on her house. The foreclosure was reported by two separate media outlets so we’re inclined to believe it is accurate. It’s also possible that she’s currently working to save her home.

TELL US – WHAT ARE YOUR THOUGHTS ON MARGARET’S INTERVIEW?