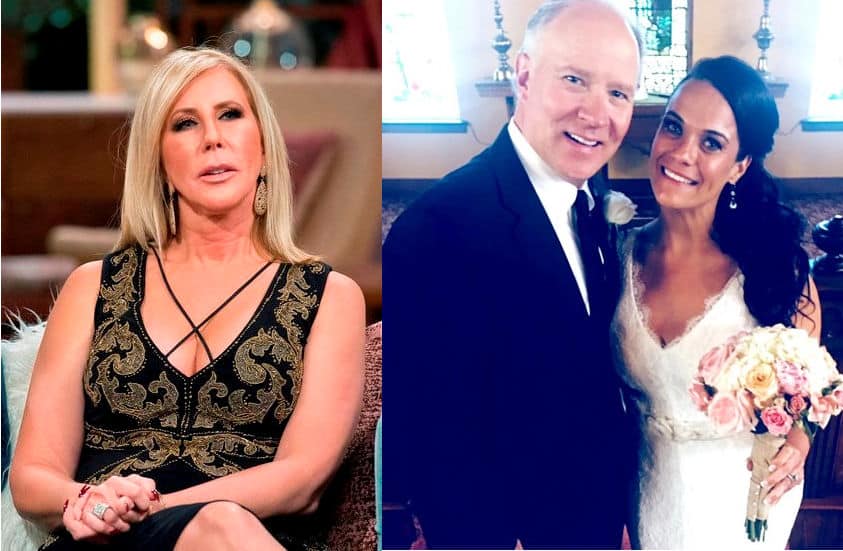 Vicki Gunvalson‘s former boyfriend Brooks Ayers married his girlfriend Christy Lindeman after less than two years of dating. So how is Vicki reacting to the news?

After Brooks confirmed his wedding news with his fans and followers on Facebook on Sunday afternoon, the Real Housewives of Orange County star was was reportedly “shocked” to learn the news. She is said however to have sent well-wishes to him, despite her ill feelings towards the known liar of Bravo TV.

“Vicki was put off by Brooks getting married. But she just thinks he is a total joke and she cannot wait until his new wife finds out what a crook he is,” a source close to the reality star told Radar Online on March 27.

During his time on the RHOC, Brooks attempted to convince Vicki and her co-stars that he was suffering from non-Hodgkin’s lymphoma by producing medical documents from the City of Hope Medical Center. However, the hospital later confirmed that he was never treated as a patient and he ultimately chose to admit to his on-screen lies.

“Vicki reached out and sent her congrats, but she will always hate him and he knows this. He broke her heart and she will never let him back in her life,” the insider explained.

Following his weekend ceremony, the once-controversial Brooks spoke out about his new wife and their plans for the future.

“I’ve never been happier!” Brooks told Entertainment Tonight. “We met in Indianapolis in November 2016 and began dating. We recently bought a house in Mississippi and we’re moving back there next month to be closer to my older children and my parents.”

“I have not heard from Vicki in over a year and I don’t expect to hear from her,” he added about his ex.

Vicki and Brooks began dating in 2011 and continued to date on and off until August 2015.  In June 2016, nearly a year after their split, Vicki suggested she had “unfinished business” with Brooks.

“Anybody I’ve been with, I will always love,” Vicki said of her former partner. “I always will care for and love Brooks, regardless of what he did and why he did it, I will never know … I know I didn’t lie for him, and I know there’s a lot of questions I’ll never get answered, but I love him.”

One year later, after embarking on a new romance with current boyfriend Steve Lodge, Vicki said she was completely done with her past relationship with Brooks.

“I did not speak to him at all, and I haven’t spoken to him … We have common friendships with people, but they pretty much know not to say his name,” she confirmed. “We’re done. I’ve moved on.”