Ryan Edwards‘ pregnant wife, Mackenzie Standifer, is speaking out in his defense following reports of his drug arrest earlier this week.

As we previously reported, the Teen Mom OG star and dad to nine-year-old Bentley was arrested at his home in Tennessee on Tuesday on a warrant for petition to revoke after he allegedly violated his probation with a heroin possession charge.

Although fans were immediately floored by the news of Ryan’s potential relapse and drug charge, his wife claims the ordeal isn’t as bad as it may seem.

“Possession of heroin was the original charge from April before he went to rehab. Part of his case was he had to be booked. Everything is fine,” said Mackenzie to Radar Online.

Mackenzie would not comment on whether or not Ryan violated his probation but said he was definitely still sober. “He took a drug test yesterday and passed,” she confirmed.

Meanwhile, Mackenzie is also firing back at Kailyn Lowry following Kailyn’s tweets today accusing Mackenzie of getting pregnant for money.

Kailyn tweeted, “Kinda wana share my thoughts on Ryan and Mackenzie… IN MY OWN OPINION. I see someone who came in & manipulated a situation to her own benefit. To secure a check. Then went a step further & got pregnant.” 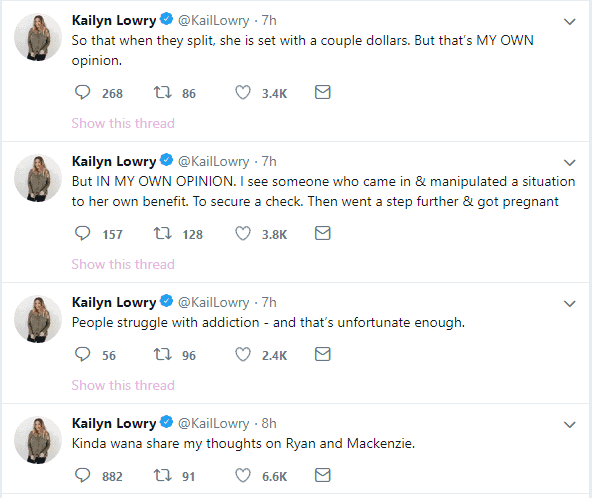 It didn’t take long for Mackenzie to fire back at Kailyn, telling Radar Online: “She’s a b***h… coming from someone who gets knocked up every two seconds by three different people.”

Ryan’s drug struggles have been a hot topic during recent seasons of the MTV reality series and after the conclusion of the sixth season of the show last year, which featured the 30-year-old nearly nodding out while driving himself and Standifer to their wedding, he entered rehab.

Although recent rumors have suggested Ryan has relapsed in the months since his rehab stint, Mackenzie has maintained that he is clean and sober throughout those reports.

TELL US – THOUGHTS ON MACKENZIE’S COMMENTS & KAILYN’S TWEETS? IS SHE IN DENIAL ABOUT RYAN’S ADDICTION?