Home Real Housewives of Orange County News RHOC’s Vicki Gunvalson Is Accused of Trying to Get Jeff Lewis Fired by Bravo! Plus Did Vicki Plant a Tweet About Jeff?

RHOC’s Vicki Gunvalson Is Accused of Trying to Get Jeff Lewis Fired by Bravo! Plus Did Vicki Plant a Tweet About Jeff?

by Sola Delano May 26, 2018 191 comments
ShareTweetWhatsappPinterestRedditTumblrMailFlipboard 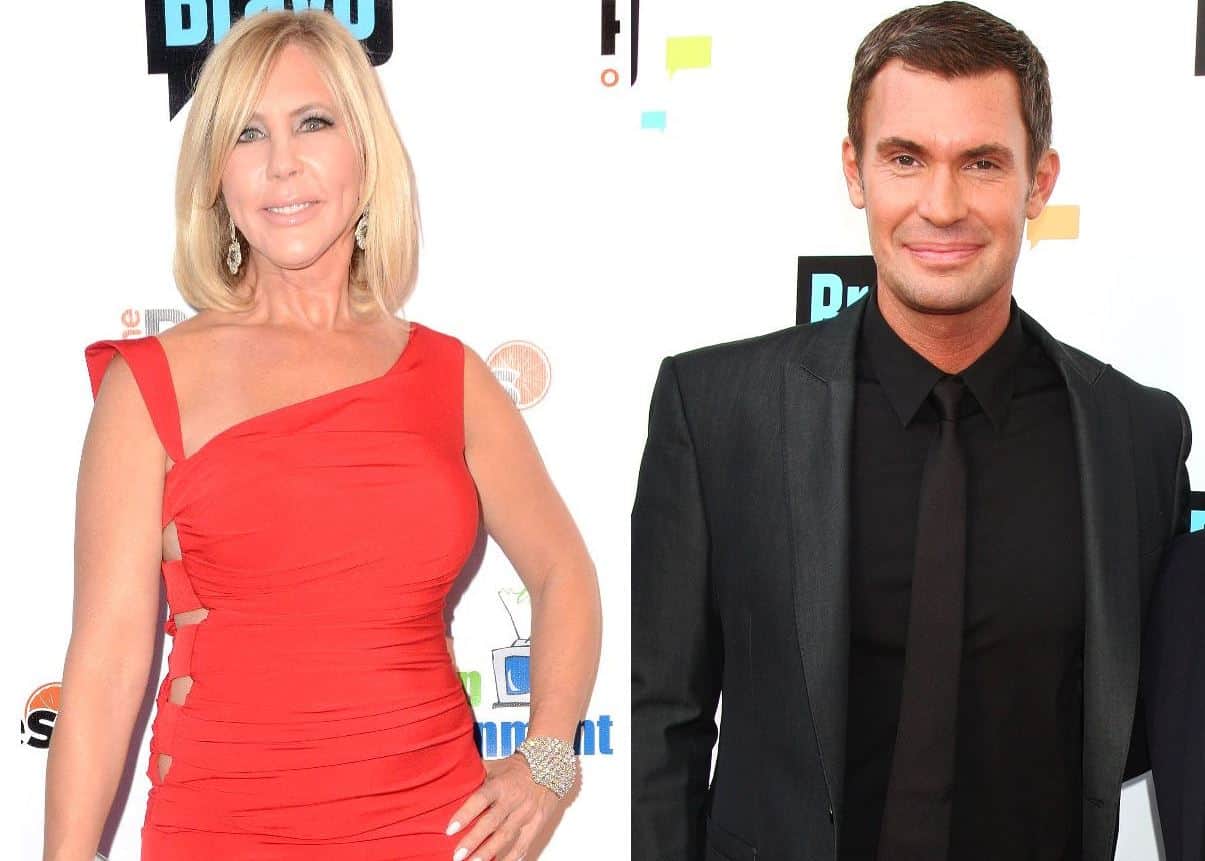 This feud is still raging on, a week after Vicki, star of the Real Housewives of Orange County, accused Flipping Out star Jeff of fat-shaming her on his radio show. Jeff denied Vicki’s claims last week and even revealed a text that Vicki had sent him.

Fast forward to today and Jeff is revealing that Vicki is now on a rampage to get him fired by Bravo, and might have planted a Tweet about him!

During the May 25 episode of his weekly Sirius XM radio show, Jeff Lewis Live, Jeff shared that two of Vicki’s RHOC castmates (he would not name them) told him during the week that Vicki had told them she was going to make sure Bravo fired Jeff.

“If you remember last week, I read a text from Vicki Gunvalson. She was very upset with me and since then, I’ve heard from two of her cast members that she is going to get me fired,” said Jeff. “So, she apparently is on the rampage for Jeff Lewis, and she’s working towards getting me fired from Bravo.”

“That’s what I heard from two cast members. She’s pulling her weight, so to speak,” said Jeff as everyone in studio started laughing. He however made it clear it was NOT a fat joke! “I am not fat shaming. I am not fat shaming,” he clarified.

The topic then turned to last week’s drama. If you recall, Vicki claimed she happened to stumble upon a tweet that alleged Jeff had fat-shamed her on his show.

Well, according to Jeff, he suspects Vicki might have planted that Tweet herself! The reason? The man who made that tweet, Corey, is apparently a very good friend of Vicki’s.

“She did not stumble upon this Tweet. This is Corey. This is her good friend of 11 years. After investigating, we’ve actually seen him on the show,” stated Jeff. “This is just allegedly. This is just my guess on what happened. I think she had her friend plant that Tweet. I think she then had blogs and news outlets pick it up.”

And due to this latest development, Jeff is now convinced Vicki was definitely involved with her ex-boyfriend Brooks Ayers’ infamous cancer scam! He also suspects she was involved in that whole scene last year during which a former close friend of Tamra Judge’s made a claim regarding Tamra’s husband Eddie during Vicki’s birthday party.

Jeff might not be aware of this but back then Vicki denied she invited Tamra’s former friend Ricky Santana to her party, but Ricky later provided proof that showed Vicki lied, in the form of text messages from Vicki asking him to attend her party.

“So now I’m wondering, when someone goes to this extent to have their best buddy of 10 or 11 years plant tweets, seems pretty manipulative, seems pretty divisive. We all kind of questioned her for last season for planting this whole theory that Tamra Judge’s husband was gay which we all don’t believe,” explained Jeff.

He continued, “For the last couple of years since this whole Brooks cancer scam came out, I really defended Vicki. I just really thought truly honestly that she didn’t know about it. But now, I’m going to change my answer. I’m going to say I think she knew about it and I think she is a liar. Based on what’s happened to me over the last couple of weeks with her, based on what happened to Tamra and Eddie, I do think she probably knew about it.”

Lastly, Jeff went on to call out Vicki for what might or might not be an inflated ego for thinking she has the power to get him fired by Bravo. By the way, his show Flipping Out is going into its 11th season.

“The other thing too is I would never think I had the power to get anybody fired,” said Jeff. “And, the fact that she thinks she has the power to do that – I think it’s kind of a misplaced sense of importance.”

Jeff also shared that Tamra will be a guest on his radio show next Friday. Must say it’s a really entertaining and fun show to listen to. It airs around noon, every Friday on Radio Andy XM.

It is also expected that the new trailer for the RHOC’s upcoming season will be released this coming week by Bravo. Cannot wait!

TELL US – DO YOU THINK VICKI HELPED PLANT THAT TWEET? DO YOU BELIEVE SHE’S TRYING TO GET JEFF FIRED?