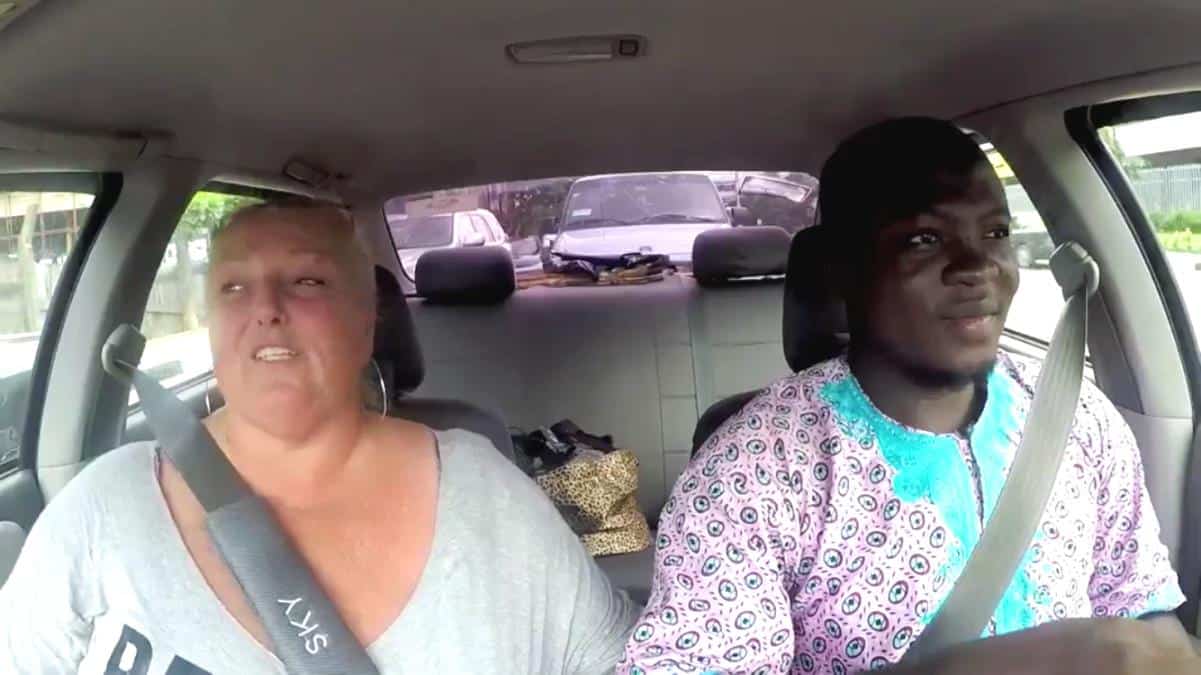 There’s a pot for every lid…an a*s for every saddle…and a dating website that can find you a match anywhere in the world as demonstrated on 90 Day Fiance: Before the 90 Days.
Ricky & Melissa: 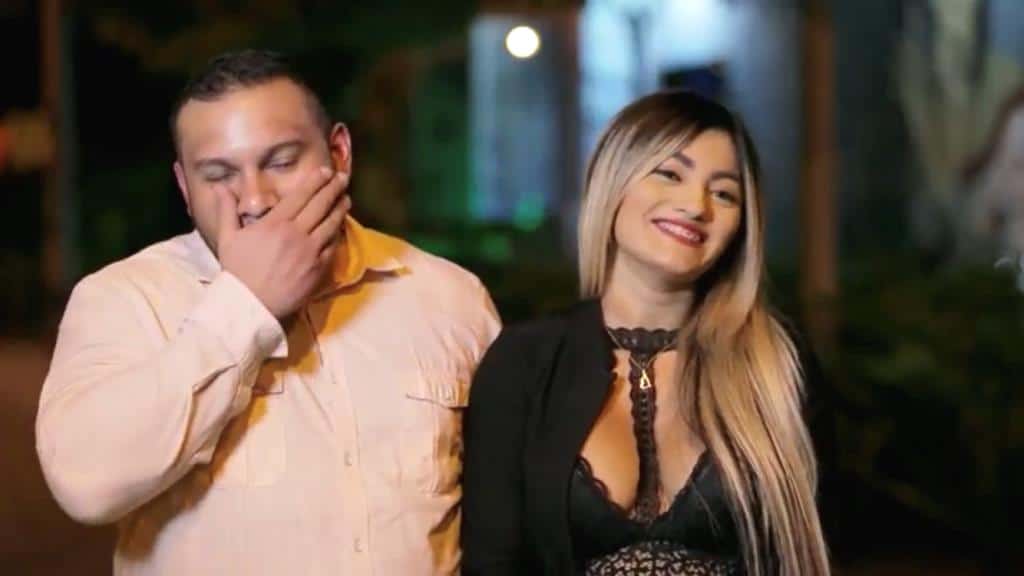 My man Ricky is potentially getting catfished HARD in Colombia. As of this point, it appears as though Melissa is totally made up and that she is standing Ricky up on his “beautiful date.” Melissa has not shown up for two hours and I can’t help but get anxious watching this unfold. While Ricky waits with his fanny pack on, we all hold our breath hoping Melissa will actually show her face.

BEFORE THE 90 DAYS RICKY AND MELISSA SPOILERS!

After what feels like days, Melissa finally sends a picture of the INSIDE of the taxi to prove she is on her way (sign number 57 that she is not who she says she is). But alas, after two and a half hours, Melissa makes her entrance. AND IT’S ACTUALLY MELISSA, the woman from the pictures. She’s a total babe (with braces) and Ricky looks like he may pass out. Melissa explains that “she was busy” and that she arrived late because she had “lots of plans.” Like, not hanging out with the man that traveled a super long distance to see you. Pssshhhht. Ricky and Melissa chat awkwardly in some bad Spanish, but he does a good job keeping the conversation light. He’s making her laugh and is very charming, but it doesn’t look like Melissa is 100% won over. Ricky suggests they hang out tomorrow and he puts Melissa in a cab. Let’s just hope this isn’t the last time he gets to hang with his dream girl. 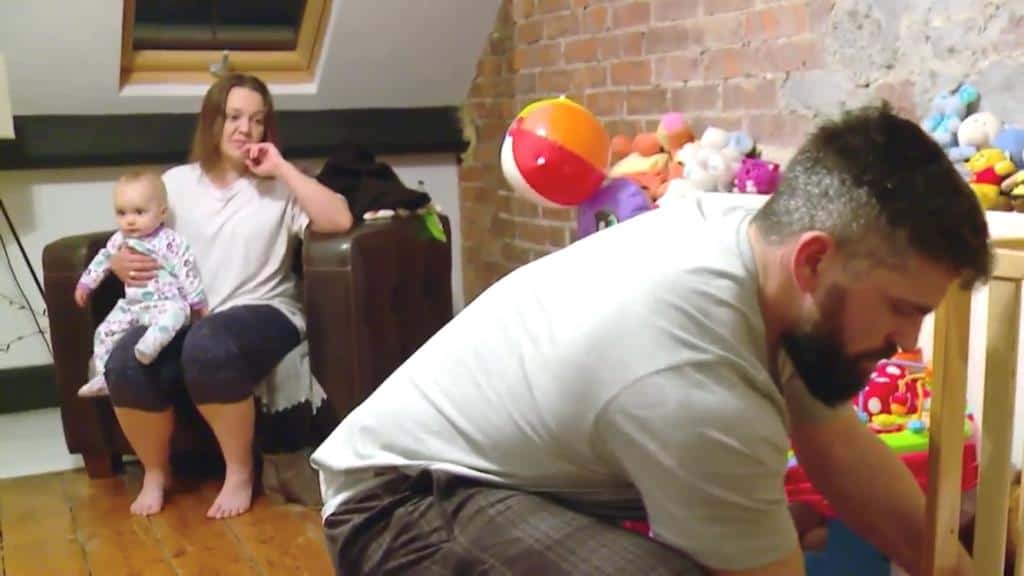 Over in London, the happy couple (plus Rachel’s 8 month old daughter, Lucy) are loving life together. The amount of PDA these two are creating is gag worthy, but it’s nice to see they truly are giddy around each other. Jon explains that Rachel looks “different” than most of his other girlfriends, but hey, there’s “chemistry” between them. It’s kinda adorable how excited they are around each other, but there’s still some personal issues that need to be sorted out between the duo.

After a three hour drive, they arrive to Jon’s pad, a house he shares with his mother, Jacqui. Mom seems a bit underwhelmed upon meeting Lucy and Rachel. She explains that “their relationship is one of those things that I don’t get.” Ooph. Looks like it’s gonna be an uphill battle winning Jacqui over.

BEFORE THE 90 DAYS RACHEL & JON SPOILERS!

Jon really tried and put together a pretty kick a*s nursery for Lucy. Rachel explains that “Jon has a lot to learn” and that she is not worried about “overwhelming him” when it comes to her baby. Rachel forces Jon to feed little Lucy, but the poor guy “doesn’t even know what the f*ck” he’s doing. Jon runs down the stairs because he is really “stressed out” and his mum makes him a cup o’ tea. He confides in his mother who makes pained expressions upon hearing her son’s fears. Seems like Jon is a bit of a mommy’s boy.

Jon explains that the first night he spends with Rachel is “gonna be amazing or it’s gonna be a disaster.” He pops in on a screaming Lucy and tries to soothe her while Rachel lies in bed awaiting her man to return. 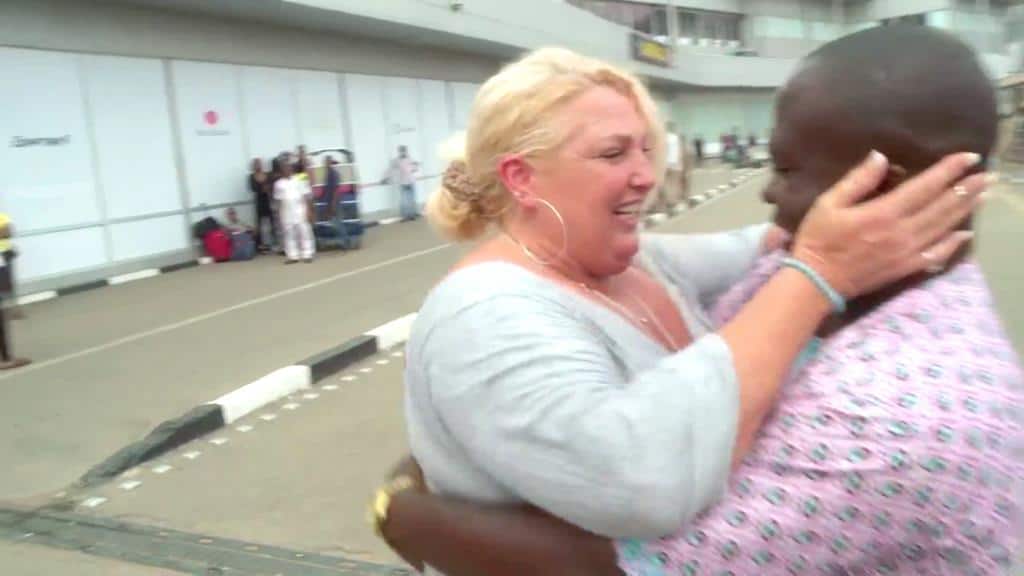 Angela ain’t in Georgia anymore. She has finally landed in Nigeria and she is ready to meet her 32 year old boyfriend, Michael. In her own words, Angela says this trip is “make or break.” Michael is sharing in Angela’s excitement and nerves as this is the first white woman from America he has ever dated. Michael does admit that “If Angela looks older or less attractive than I thought, I would be kind of disappointed.”

So it appears as though Michael is NOT disappointed in Angela’s appearance as they run slow motion toward each other for an aggressive embrace at the airport. Angela explains, “I just had to run to him cuz that’s my sexy Nigerian.” Totally understandable, Ang. Angela will not stop kissing her boo, despite the fact that Michael reveals, “Her stature is kinda bigger than I expected, and she looks older than the pictures, but I am happy. I am overwhelmed. “ Michael is in for a wild ride with everyone’s favorite Georgian. “Oh Angela. You crazy.” Oh Michael, you have no idea.

BEFORE THE 90 DAYS ANGELA & MICHAEL SPOILERS!

Michael’s already having a tough time with Angela’s antics. She is loud and unsure of the “rules” of the land. Angela is spending an arm and a leg on this trip and she has booked a hotel. As Angela unpacks, she gifts Michael with Donald Trump paraphernalia-hats, clothing, bobble heads- because Michael loves the Don. Because of all of the goodies Angela has toted from the US, Michael decides, “I should be able to cope with her for the next couple of weeks.”

After a very “busy” first night together, Angela is off to meet Michael’s mother. Michael seems a little concerned and states that Angela “is just so masculine. She has like this energy,” but nonetheless, the couple make the trip.
Michael explains that his mother is going to look at Angela “from head to toe” and that she should put on concealer so she looks younger. For once, Angela appears to be at a loss for words upon arriving in Michael’s neighborhood. Angela is uncomfortable because she is white and old and worries about what Michael’s mother thinks about their relationship. 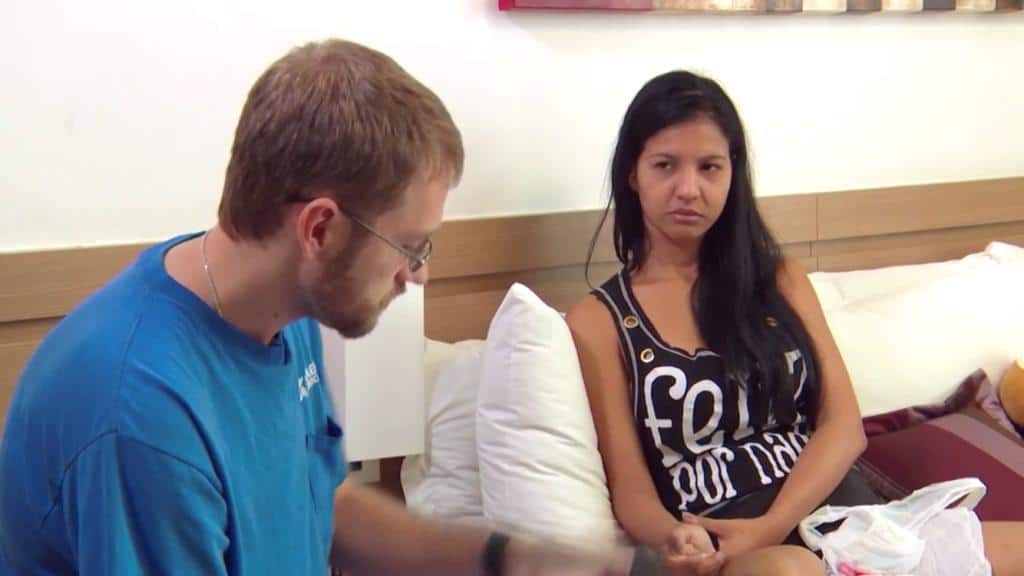 So, Paul is currently experiencing some serious trust issues with his fiancé Karine. However, Karine is p*ssed when Paul asks her to take a pregnancy test, further raising red flags for Paul. He has fears that Karine has been cheating on him and feels ultra paranoid. Karine explains that she is “offended” by Paul’s request to take a pregnancy test; so therefore, Paul takes the situation in his own hands and buys a test for Karine. Paul! He begs Karine and eventually she gives in, despite his pathetic state. BUT WAIT. Curveball. Karine comes out of the bathroom saying that she is sorry and for a brief moment it looks like Paul is about to barf. Karine momentarily makes Paul think she is pregnant, but after making him sweat, she makes it very clear that she is not pregnant.

Now it’s time to put Paul in the hot seat. He is off to Karine’s parents’ house, but not for a family dinner or reunion. No no. This time it’s to talk about Paul’s criminal past. A translator was hired to avoid any confusion. Paul sits embarrassed, as if he understands what the translator is saying in Brazilian. He has to know that Karine’s police officer father cannot be happy with his potential future son-in-law. Even Karine’s mom expresses concern, especially over the whole ex-girlfriend saga. Paul makes it clear that that phase of his life is long over. Karine speaks and asks that her parents give their “vote of confidence.” Eventually, Karine’s father gives Paul the green light to marry Karine. Time to start planning the wedding, ya’ll! 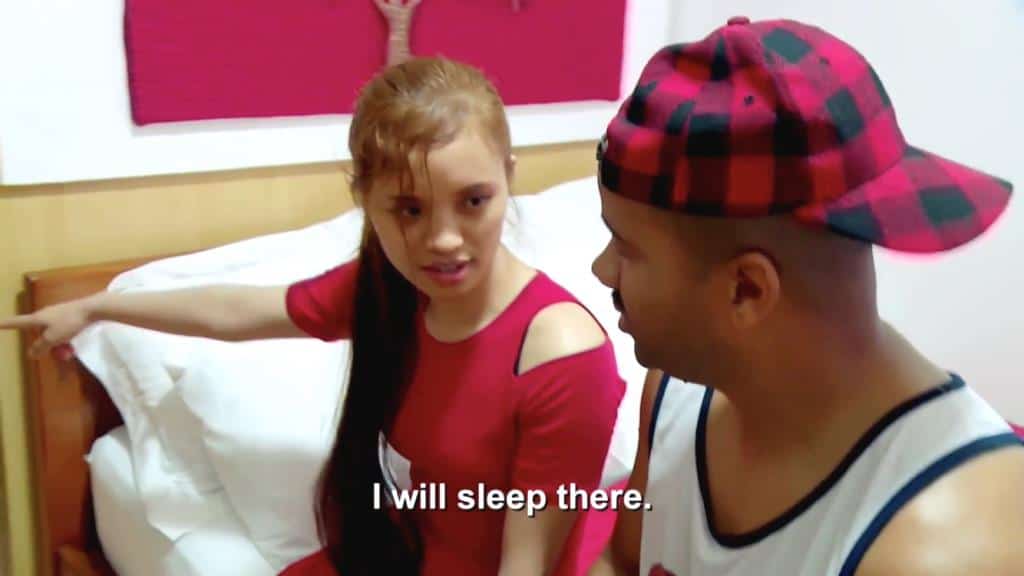 Tarik is en route to the Philippines to meet his “soul mate” Hazel. Tarik explains that it will take him 2 days to get to this dream woman. A lot of people think Hazel is just using Tarik because she was being super shady prior to Tarik’s departure. Poor guy is a ball of nerves in his Elmer Fudd plaid get-up, but he is beyond excited to meet his girl in Manila.

As Tarik reaches the final destination, we get a 24 hour flashback into Hazel’s life in Manila. She explains she is “looking for American man because she is just a poor girl” who wants better life. According to Hazel, “money’s important to me.” Tarik has “big house,” and it looks like Tarik is her ticket to a better life. Hazel hopes once she gets with Tarik and gets his money, she can get HER son back. But Hazel still has reservations about Tarik, as she remains slightly nervous about Tarik’s ex who lives in Bangkok.

Just when you thought the initial meetings on this show couldn’t get any more awkward, Tarik wins the award. While Tarik oohs and ahs over Hazel, she stares dead eyed and seems skeezed out by Tarik. She states that “It’s different from online and in person because I think he’s chubby but I am happy he is here because I was worried I could lose my chance for a better future.” I like how Hazel is concerned about Tarik’s motives when it comes to his ex-girlfriend, yet she is outwardly stating that she is essentially using Tarik as a ticket to the US.

While in the cab, Hazel explains that she was worried that Tarik was with his ex while he was stuck in Bangkok. Tarik does his best to alleviate any fears, but Hazel wants him to “prove” that she is “the only one.” Tarik and Hazel arrive at a condo that he booked, but Hazel does not seem impressed nor excited. Especially when she has to create a pillow barrier in the bed that they are sharing. She doesn’t want him to “touch her.” They head off to sleep, but not before Tarik demands a quick smooch from his lady, the first one of the evening. Interesting considering she didn’t kiss him upon his arrival to the Philippines. 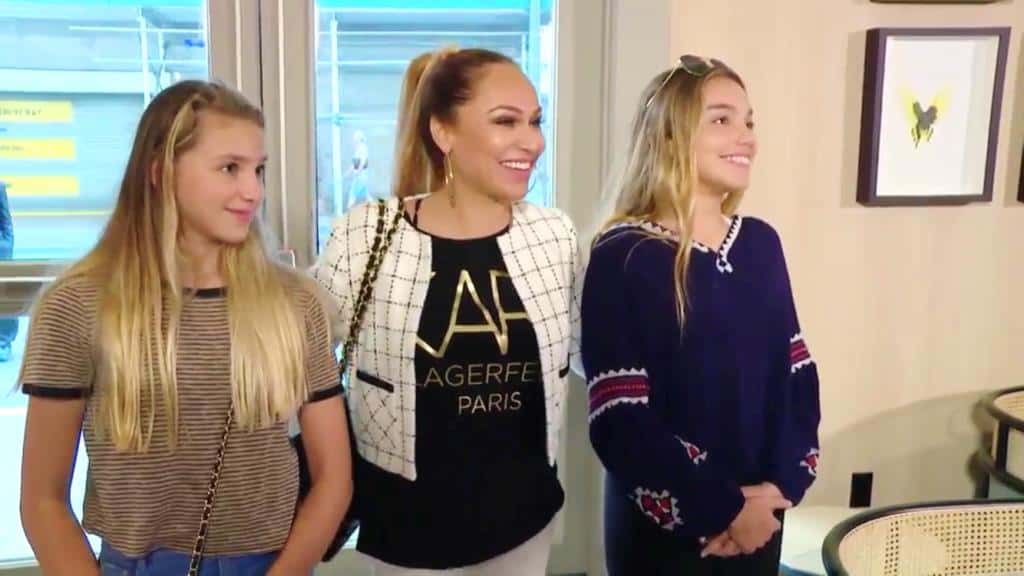 These two. Darcey is absolutely delusional about her “relationship” with Jesse and she is forcing it so hard. Darcey and Jesse are spending some time in NYC, but they fight like cats and dogs (however to Darcey, it feels like they have a “deep connection that is unbreakable.”) Right. Jesse will be getting introduced to Darcey’s daughters and he explains that he doubts many things about his relationship with Darcey. Jesse is careful with his words when discussing “step-dad status” and he remains a little cold about the whole situation, as he is only 24.

BEFORE THE 90 DAYS JESSE & DARCEY SPOILERS!

The next day is Darcey’s birthday. She is 43. She also wears a full face of makeup in bed, eyelashes and all. What a life. Darcey reads a love letter from Jesse out loud and I am a bit uncomfortable watching Jesse and his murderous eyes take in her reaction. 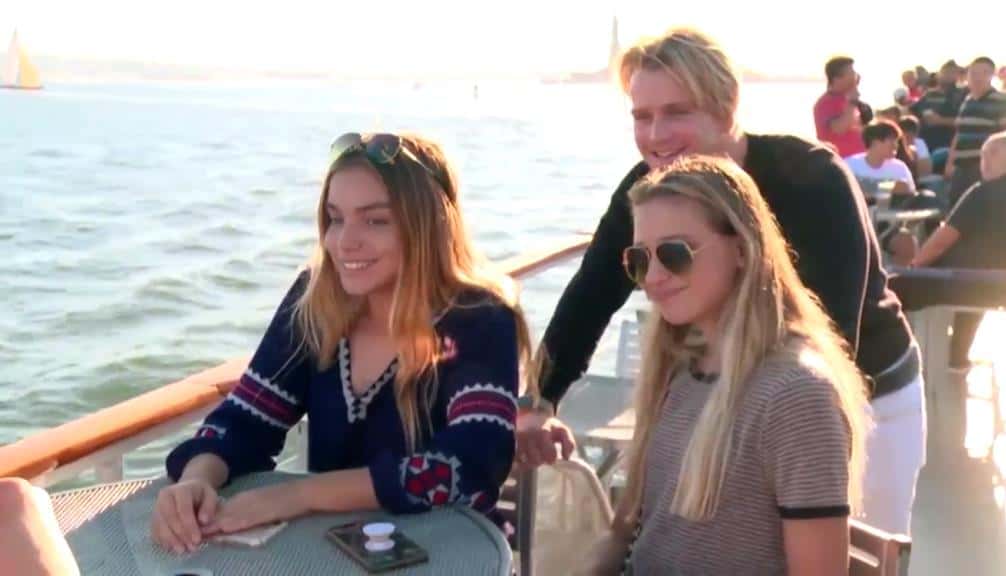 Speaking of uncomfortable, today’s the day Jesse meets Darcey’s daughters and gets one step closer to that #dadlife. Darcey’s daughters understand the weirdness of the entire situation, but they are not too worried, as they are “millennials,” just like Jesse. OMG. I just did quick math. Darcey’s daughters are 11 and 12 and for Jesse to be their dad, he would have had them when he was 12. Let that sink in. The crew heads out for a boat ride to celebrate this momentous event and all seems to be going smoothly until Darcey calls for a “family hug” and shouts “team Darcey and Jesse.” Holy uncomfortable.

TELL US – THOUGHT ON THE LATEST BEFORE THE 90 DAYS EPISODE?