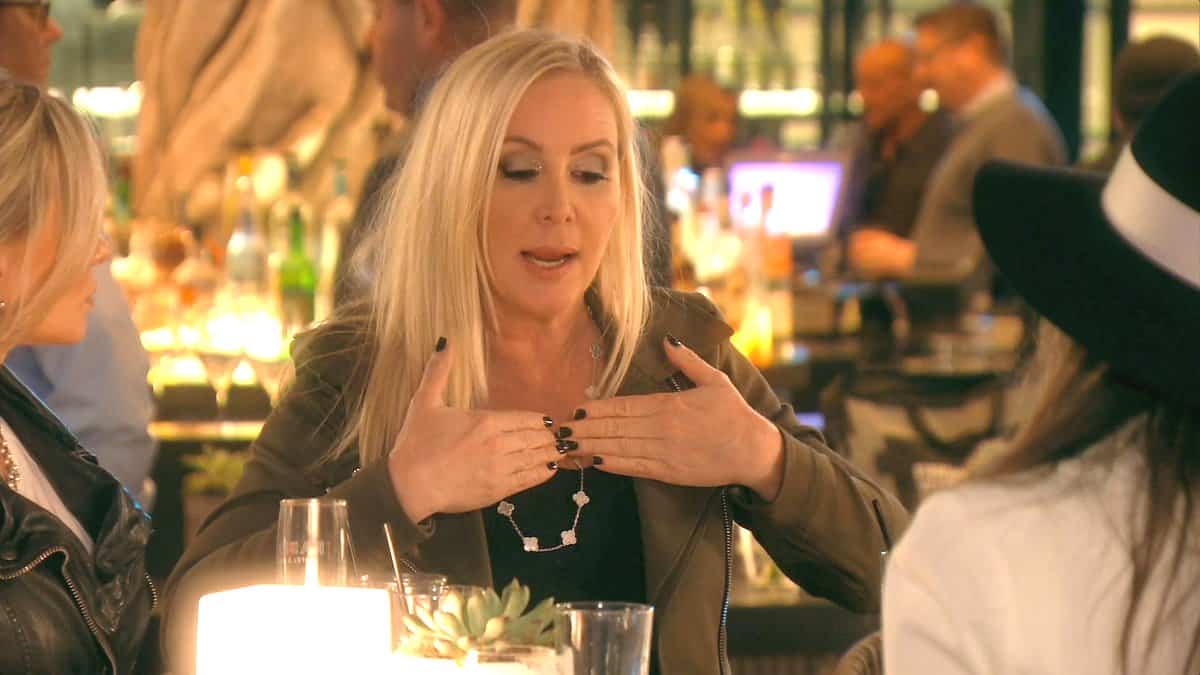 Here’s another episode of the Real Housewives of Orange County featuring a dragged out storyline that involves someone’s husband and nosey women trying to stir sh*t up.

Shannon is off to the races…Today, she’s having a photo shoot for her “baby,” aka her QVC food line. Shannon is working it for the camera, but she still has some serious body issues regarding her weight. Of course Tamra and Kelly join in on the photo shoot fun because the new besties seem to do everything together. Emily eventually arrives and later Kelly seems bored because she is not the center of attention. Shannon admits that she is a little nervous about the whole QVC situation, but the ladies cheer her on. Post photo shoot, the girls sit down to lunch and discuss normal middle-aged women topics. “Do you guys know it’s officially blow job day?” Um, no, Tamra. We didn’t. But thanks! Can you pass the sandwiches, please?

Enter Vicki, the businesswoman. After nearly 20 years of owning Coto Financial, Vicki has decided to franchise the company and expand. Therefore, she heads into a studio to record a commercial to promote her company. It’s perfect. Vicki totally has a face for radio!

Back at Shannon’s house, the ladies get to hear an earful about Shannon’s divorce. Everyone has an opinion on this topic, as they are pros at this whole divorce thing. Kelly reminds Shannon that “Spousal maintenance is where you really get the money.” Noted. Shannon admits that raising three children in California is expensive. News flash: raising three kids anywhere is expensive. Because Shannon’s ex David refuses to get a lawyer, it is impossible for the ex-couple to settle. Poor Shannon gets slammed by David who claims she “excessively drinks” and it seems like there is no happy end in sight for Shannon.

To change the subject, the girls wanna hear about the end of Emily’s poker night. (Wait, how is Emily able to sneak out of her law firm to join in on the photo shoot fun right smack in the middle of the day?! Must be a slow day at the office, huh Em?) Emily fills them in and explains that her husband, Shane, was less than pleased with Gina’s drunk, noisy antics. This whole get-rid-of-a-loud-Gina-because-my-husband-is-angry storyline seems recycled from seasons’ past, amirite? Tamra is appalled that Emily’s husband would yell down for a guest to leave a party, but Emily doesn’t seem embarrassed by Shane’s moves.

The next day, Vicki and Kelly head over to a “Happy, happy, happy hour” (Vicki’s words, not mine). Kelly tells Vicki all about the whole situation regarding poker night’s end. While Vicki cannot get over Shane’s ballsiness, it seems as though Emily and Gina are well on their way to making amends. I mean, Gina is picking Emily up for said “happy, happy, happy hour” because “I have three god d*mn kids. I need a night out.” Amen, Gina. Again, HOW IS EMILY ABLE TO GO OUT IN THE MIDDLE OF THE DAY?! This woman seems like a terrible lawyer/party planner. While Emily appears to brush the recent drama between Gina and her husband under the rug, Gina states outright that Emily’s husband could have handled the situation a little more “gracefully,” and suggests that if anyone owes anyone an apology, it should Emily’s husband apologizing to Gina. Dream on, Gina. Never gonna happen.

Vicki and Kelly continue to discuss Emily’s husband and cannot get over the fact that he is a Mormon. “No wonder he was upset! Mormons don’t curse, drink, or gamble!” Gina hit the trifecta the night of the poker party and I guess that sent Shane off. Still, it doesn’t justify his actions.

Evidently, no one works and they are able to gather mid afternoon for a couple of hot toddies. Everyone eventually rolls up (pun intended- see: Tamra’s scooter), but Shannon is the last to arrive. She has just come from court with her ex and states that she felt nothing upon seeing him. The girls remind Shannon that “When you’re indifferent, that means you’re ready to date.” Everyone thinks that Shannon “needs a kick in the a*s and should get back into the dating pool.

Tamra goes as far as suggesting that Shannon meet a matchmaker…today. Well isn’t that convenient? Talk about magic timing! Turns out that Tamra set up the whole matchmaker ordeal cuz it doesn’t seem like Shannon is going to make a profile on Bumble. The matchmaker gets to learn about Shannon’s past and with Tamra by her side, Shannon is one step closer to making a love connection. Tamra divulges information about Shannon’s ex, and although she looked incredibly uncomfortable during the entire meeting with the matchmaker, Shannon is getting excited about the prospect of finding a new man.

After Vicki and Emily leave happy hour, the women naturally want to know any inside info from Gina’s perspective about the whole poker night fight. Gina played it down and said that Emily’s husband simply asked her to leave. Gina explains that “Emily that night was embarrassed by her husband’s behavior” and she doesn’t need to carry on about the whole thing. This is a stretch of a storyline and Gina is not playing along ala Bravo style. Gina continues to defend Shane the troll and states that she is going to give him “the benefit of the doubt.” I think that’s it’s secretly killing the women that Gina is not carrying on about the whole situation because you know how they are-they just love the drama.

Obviously, Vicki and Tamra are now doing everything together, including microblading. Tamra explains that “Microblading is basically tattooing your eyebrows in a very natural fashion.” Sounds horrible. Whilst getting their brows done, Vicki and Tamra take part in one of their favorite hobbies and interests: talking about other people’s husbands. It appears to have become an obsession for them. First, they slam Emily and her husband Shane. They are not able to get over the whole Gina “debacle.” From there, they move onto Gina’s current situation with her husband because it’s allllllllllll of their business. “He has an apartment in LA that she’s never seen” and Gina has stated that she doesn’t even know where her husband’s apartment is in LA. Although the scenario with Gina’s husband seems a little suspect, this type of sh*t talking is none of Vicki and Tamra’s business and they need to cool it.

Kelly is on yet another date, with this dude Frank…the milkman. Kelly explains that this guy is “purely on her bench,” considering Frank lives in New York. For some reason, Frank wants to know about Kelly’s dating of recent, and Kelly doesn’t hold back. Totally awkward. Frank suggests that Kelly needs to “take it down a notch” or else she’s gonna be alone for the rest of her life. Ouch.

The next morning, Shannon tries to get pumped up for her divorce proceeding, despite her anxiety. She phones her mother and discusses some of her fears about “walking into the unknown.” Before Shannon heads into court, she meets with her lawyer to talk about options. Post court, Shannon is “shaken up, emotional, and very uneasy.” As it turns out, the judge ordered David to pay $30,000 a month. Of course David didn’t go down without a fight. He confronted Shannon and her lawyer and screamed at them. David was so aggressive that the bailiff was called to help.

Later, Shannon settled on “$22,500 because that’s what I need.” I don’t know what I’m more in awe of- David’s lack of respect for the court system/Shannon OR the fact that Shannon NEEDS $22,500 a month to survive. What. A. Life.

TELL US – THOUGHT ON THE LATEST RHOC EPISODE?