The Real Housewives of New York Reunion Recap: The Party’s (FINALLY) Over! 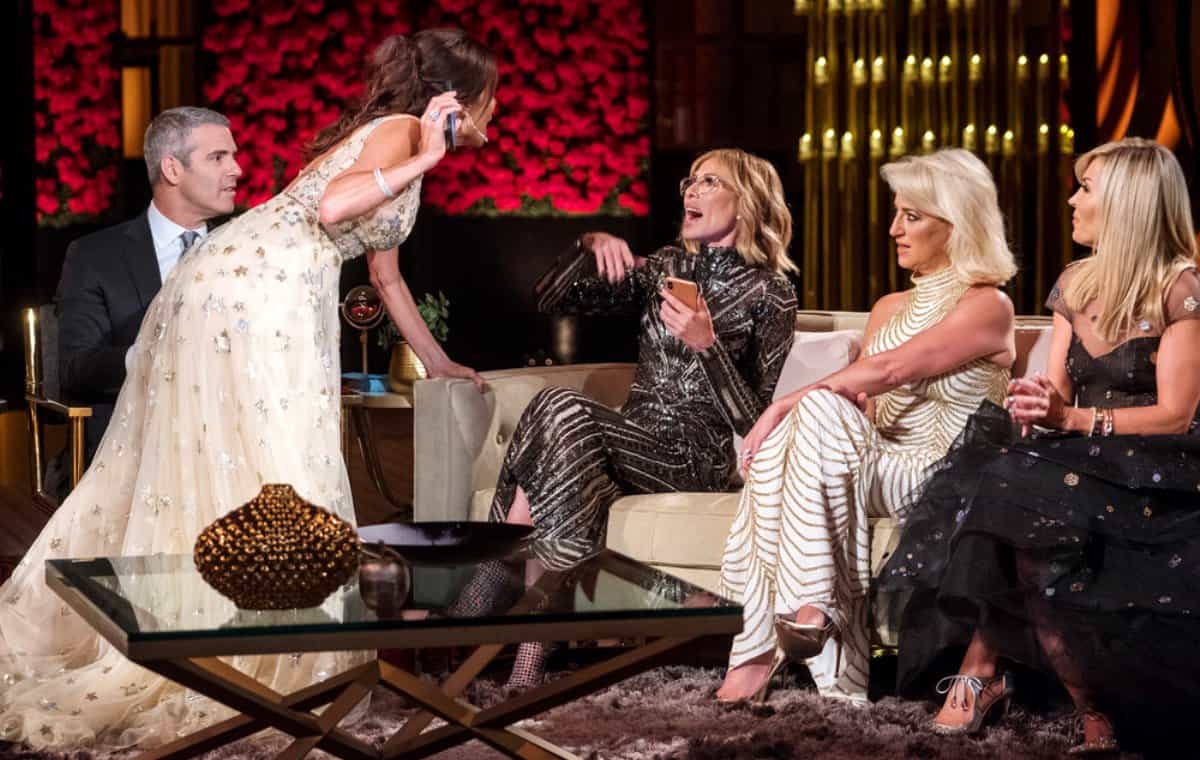 The 10th season of The Real Housewives of New York City came to a close last night with the dizzying, migraine inducing conclusion of the reunion.  Spoiler alert: it was mostly about Bethenny.  Bethenny and her feelings, Bethenny and her thoughts, and most of all, the untimely demise of Bethenny’s friendship with Carole.  It really should have been just Carole and Bethenny sitting on the couches, alone, rehashing their issues.  It was almost as though the other five ladies didn’t even exist!

When we picked up with the Bethenny and Carole show last night, Carole had just finished telling Andy that he was “full of s**t” for saying that she and Bethenny had spent the season bashing each other, and that Carole wasn’t the innocent victim she was claiming to be.  Carole said that Andy must be scared of Bethenny, just like everyone else, but Andy assured her that wasn’t the case.

Bethenny, who thoroughly enjoyed having Andy on her side throughout the entirety of the reunion quickly piped up to agree with him, and brought up an Instastory that Carole had posted with her friend, Cassandra, in which both women bashed Bethenny, her Skinny Girl empire, and her overall attitude, as proof that Carole had given as good as she’d gotten. Carole said that Bethenny had blocked her on Instagram, a move she deemed completely immature, and wondered how she’d even seen it.

As they talked over each other, and argued over who had been the worse friend, Andy switched the subject to Brian, AKA, Red Scarf Guy, and asked if either of them were still in contact with him.  Bethenny said she wasn’t, but Carole said she still spoke to him on occasion.  She added that he was not the least bit interested in Bethenny, and had told her so.  She also said that Bethenny had lied about him constantly trying to get a date with her and about trying to set him up with Carole.

Bethenny said that everything she’d said about Red Scarf Guy was true, and Andy pointed out that during the speed dating event, he had said that he was there to see Bethenny, and asked if that made Bethenny’s story more believable.  But, of course, Carole said that it didn’t, and she brought receipts in the form of screenshots he’d sent her of his texts with Bethenny.

Of course, Bethenny had the texts, as well, and they both began to read from them.  Carole read a text Bethenny sent to him about a lunch date, and Bethenny read her own texts, in which she did, in fact, offer to set him up with Carole.  She got off the couch to show Carole the text and said “booya, b***h!” as she shoved the evidence in Carole’s face.

Andy read the texts, as well, and once again came to Bethenny’s defense, saying that she clearly mentioned a Red Scarf Guy/Carole hookup.  Bethenny piped up to say, “yeah, you shmoron,” but Carole was undeterred. And she had good reason to be. In the text messages Brian shared publicly, Bethenny was interested in him and appeared to be trying to set up a date for herself. It wasn’t until Brian mentioned his interest in Carole that Bethenny ultimately asked him if he wanted her help in getting set up with Carole.

Bethenny’s claim that she also tried to set up Brian with Carole the same night of the speed dating event was false. It wasn’t until days later, and after he mentioned his interest in Carole. But the viewers will never know this because Bethenny yelled and overtalked Carole, and Andy, whether intentionally or unintentionally, chose not to get to the bottom of this.

Andy mentioned that Carole seemed awfully angry, and wondered aloud about how things had gone so wrong between them.  Carole said that her problems with Bethenny really came after they finished wrapping up the season, and she finally watched the show, and saw all of the horrible things Bethenny had said about her behind her back to the other women, and during her confessional interviews.  Carole said it was then that she realized that Bethenny was “superficial,”  and never had any intention of fixing their friendship.

Bethenny disagreed, and said the friendship had ended because had “changed,” and said she was equally hurt by the things Carole had said about her in her blog posts.  Carole said she hadn’t changed, she just had her eyes open now, and could see Bethenny for who she really was. She added that only “two people” read the blog posts, and that she’d only been trying to hold Bethenny “accountable” for her actions.  But Bethenny said that plenty of people read the blogs, so they argued about THAT for a moment, before they both finally agreed on one thing: the friendship was over for good.

Andy said that it was a shame that Carole and Bethenny were calling it quits because they had always been so much fun to watch.  The other ladies also encouraged them to give it time before completely slamming the door on the idea of being friends again, and Dorinda suggested they “just put a comma on it.”  But Carole was unmoved, and said she was particularly angry about Bethenny’s comments about her not having a career, and said once again, that she would put her resume up against Bethenny’s any day.

She began talking about her career as a journalist, and spoke about the 15 years she spent working at ABC news, which she was very proud of.  When she mentioned that she’d left that position in 2001, Bethenny was quick to point out that 17 years had gone by, and Carole asked her if she was trying to make a point.  It seemed that she was, and the two women were off and running again, each talking over the other, as they listed their professional accomplishments.

Andy also wondered if Carole’s close friendship with Tinsley had contributed to the rift between them, but Carole said it hadn’t.  In fact, she said that she and Tinsley really weren’t all that close, and that the idea of them being “thick as thieves” was a “narrative” Bethenny had concocted during the season as a way to launch their problems.  She said if anyone was “thick as thieves” it was Bethenny and Sonja–and she sounded a little jealous!

This was all news to Tinsley, who said that hearing Carole say that they weren’t close really hurt her feelings.  And who can blame her?! No one wants to sit there while the person they thought was their best friend tells the world that they’re not.  Carole said she didn’t want to hurt Tinsley, but needed to be “honest.” She tried to console Tinsley by assuring her that she “liked” her and thought she was a “great girl.” Ouch! That’s almost worse than saying she doesn’t like her at all.

Everyone was understandably shocked by Carole’s harsh words, and pointed out that they seemed to spend a great deal of time together.  Bethenny even began listing the many trips Carole and Tinsley had taken together, but Carole maintained that the friendship wasn’t as deep as it seemed, and said their perceived bond was mainly due to the fact that their boyfriends were close.  Poor Tinsley didn’t say another word.

But Carole had an explanation for her lack of warmth toward her “friends.” As it turns out she’s not just a b****, she’s a medical marvel! Carole recently discovered that she has a HUGE hippocampus, which is the part of the brain that controls emotions.  She credited the largess of this part of her brain with making her so “sane,”  and said that was the reason that she didn’t become emotionally overwrought over trivial matters, and why she became so annoyed with Bethenny when she wanted to do all that unseemly crying and hugging in Cartagena.

And Carole wasn’t the only one with a medical excuse for her poor behavior.  When Sonja was finally given 5 minutes to speak about her antics throughout the season, she said that weening herself off of antidepressants had removed the filter between her brain and her mouth, causing her to say exactly what she was thinking–especially to Tinsley.  She apologized for some of the nasty things she’d said about Tinsley in the beginning of the season, and while Tinsley accepted the apology, she also mentioned that, like Carole, watching the season had given her a true idea of how Sonja really felt about her, and she was still hurt.  She was especially bothered to hear that Sonja had compared her to “Holly GoLightly,” Audrey Hepburn’s famous character in Breakfast at Tiffany’s, whom Tinsley said was just a glorified prostitute.  She wasn’t wrong. Tinsley said that if she’d known about Sonja’s comments before, she’d have surely come at her much harder during the season.

At this point, Ramona, who was largely ignored throughout the reunion, stood up and started punching herself in the leg.  When Andy asked what was going on, she said that she had a “cramp,” after taking an hour long spinning class, but it was pretty obvious that she just needed a little attention. So, you see, it wasn’t really ALL about Carole and Bethenny..but it mostly was.

In the end, the RHONY ladies all said they regretted not being better friends to each other, but who’s really buying that?! They hugged, and in the interest of sobriety, toasted to their absent comrade, “Lu,” and bade farewell to a season that gave us a  little black face, an arrest, two stints in rehab, a cabaret, a near death experience, and a whole lot of drama in between.  The party is officially over…FINALLY!

TELL US – THOUGHTS ON THE CONCLUSION OF THE RHONY REUNION? ARE YOU AS EXHAUSTED AS WE ARE? TEAM BETHENNY OR TEAM CAROLE? DO YOU THINK ANDY SHOWED FAVORITISM TO BETHENNY? DOES CAROLE NEED TO STOP HARPING ON THINGS? DO YOU WANT TINSLEY TO RETURN?