Home Real Housewives of Orange County News RHOC’s Emily Simpson Gets Into Nasty Twitter Feud With Tamra Judge and Shannon Beador! Tamra Implies This Will Be Emily’s Last Season on the Show

RHOC’s Emily Simpson Gets Into Nasty Twitter Feud With Tamra Judge and Shannon Beador! Tamra Implies This Will Be Emily’s Last Season on the Show 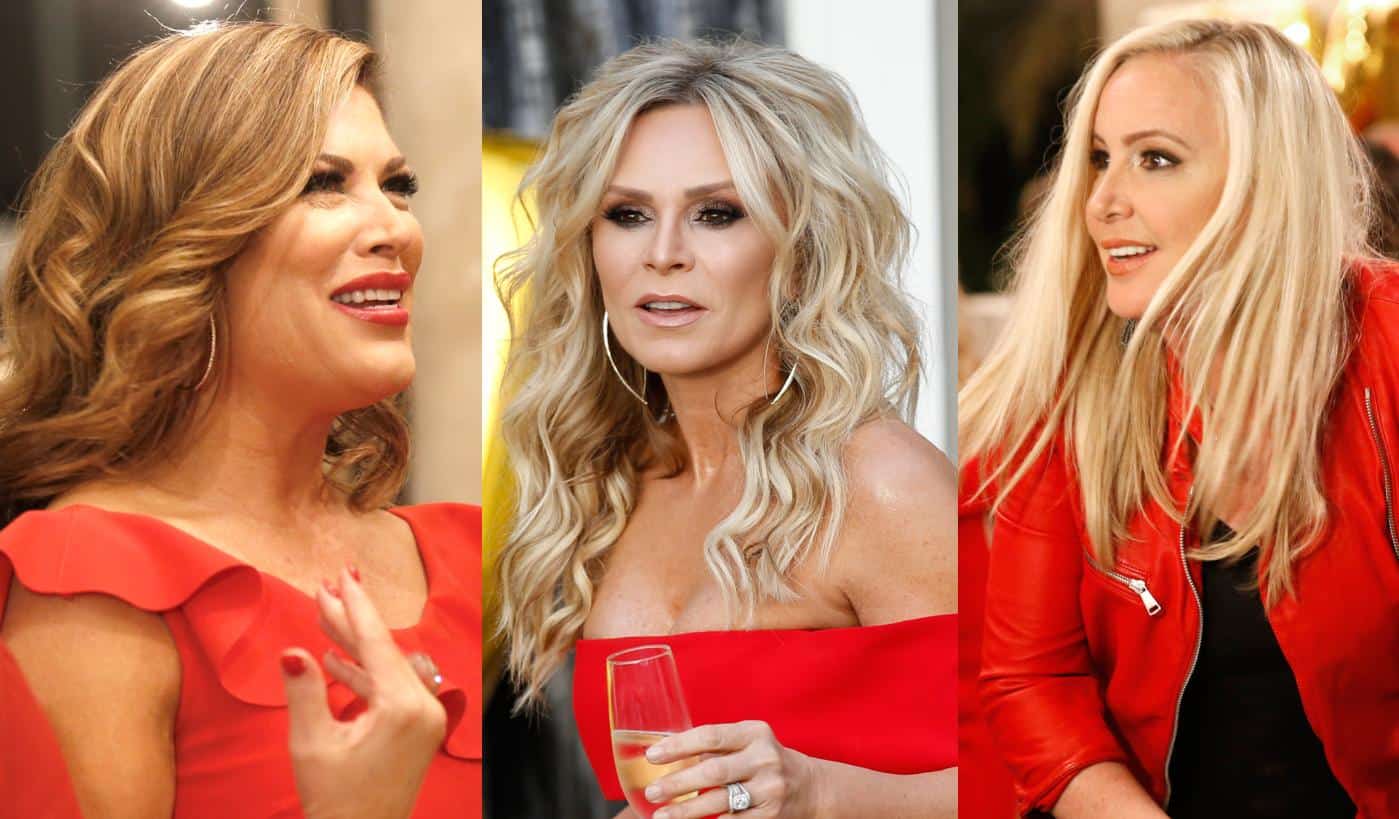 It’s safe to say this season of the Real Housewives of Orange County has not been lacking in the drama department, and now some of the apparent bad blood from the show is spilling onto social media!

Following the dramatic showdown between Emily Simpson’s husband, Shane Simpson, and Kelly Dodd, Emily has now gotten into a rather nasty Twitter feud with Tamra Judge and Shannon Beador.

The Twitter drama began after Emily tweeted out a link to her latest Bravo blog on Monday, September 17, and included the following caption: “Check out my response to last week’s episode. I always get the last word ha ha! Let me know your thoughts!”

Emily’s tweet seemed to rub Shannon the wrong way as she responded, “I wouldn’t be too sure of that @RealOCEmily We have a long season ahead of us.”

Things then took a quick turn for the ugly after Tamra chimed in and implied this will be Emily’s first and final season on the RHOC!

Tamra wrote, “Or the last paycheck.”  A screenshot of that Twitter exchange is below. 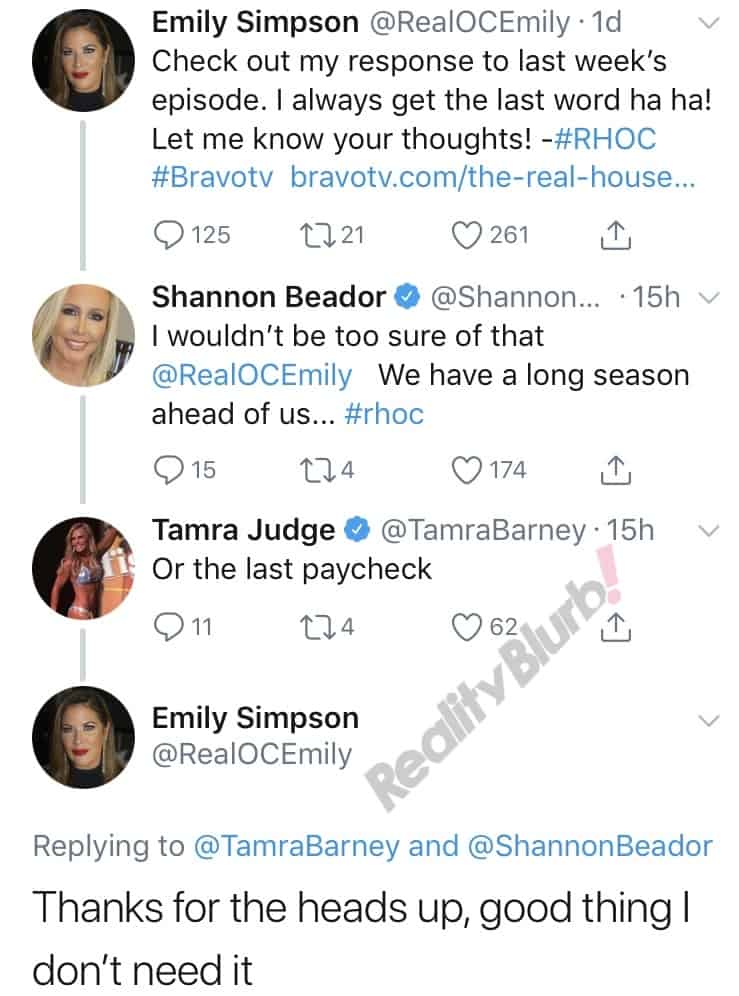 Emily however wasn’t fazed by Tamra’s shade as she fired back by making it clear that she would be just fine with or without Bravo’s paychecks.

“Thanks for the heads up, good thing I don’t need it,” tweeted Emily, who is also an attorney and party planner. Emily then went on to agree with a Twitter user who felt that Tamra was implying she would lose her spot on the RHOC.

As we previously reported, Tamra implied during her blog last week that Emily’s husband, Shane, was a coward who hid behind Emily during the fight with Kelly.

Emily however clapped back at Tamra yesterday, when she threw shade at some of her RHOC castmates by stating they are inserting themselves into this Shane/Kelly drama because they don’t have interesting storylines of their own.

The Twitter beef didn’t end there as Shannon later revealed that her real issue with Emily has to do with her “ego.”

Emily responded to Shannon by tweeting, “Oh Shannon, don’t you have a restroom to go run off to and hide #shannonstormsoff.” 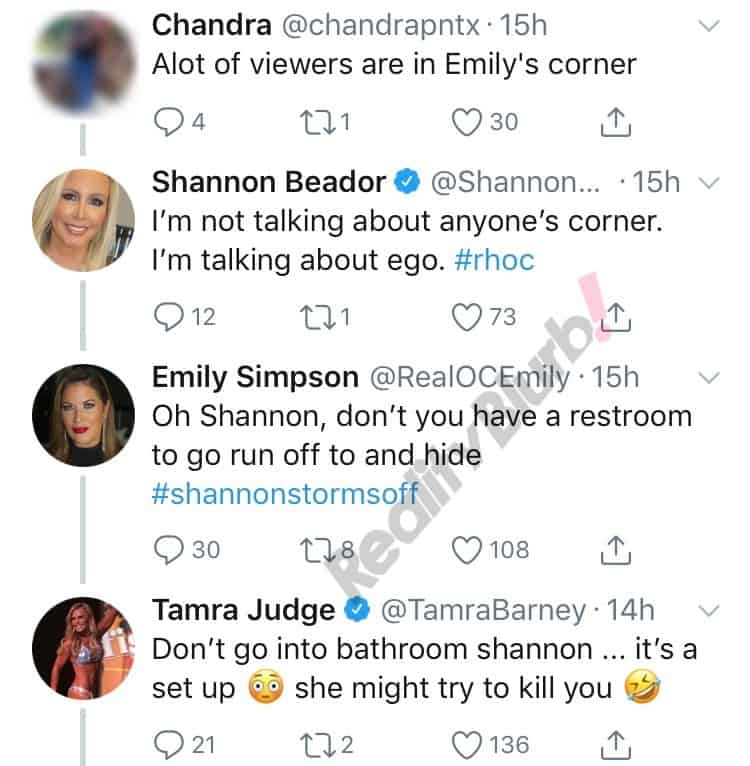 Tamra once again butted in and took a shot at Emily by tweeting, “Don’t go into bathroom Shannon … it’s a set up ? she might try to kill you ?.”

Tamra is of course referring to the threats Emily made against Kelly during the fight involving Shane. Viewers saw Emily having to be held back as she screamed “I’ll f**king kill you” to Kelly.

Finally, Emily also had some words for an attorney on Twitter who suggested her law license was on the line following her actions on the Bravo series.

“Less alcohol. We all lose our cool, but it’s a dangerous thing to do when you have a sip too much and your license is on the line for your conduct,” wrote this lawyer on Twitter.

“My license isn’t on any line. You should know that,” responded Emily.

My license isn’t on any line. You should know that.

TELL US – THOUGHTS ON THIS TWITTER FEUD? WHOSE SIDE ARE YOU ON?