The Real Housewives of Dallas Recap: Off the Leash 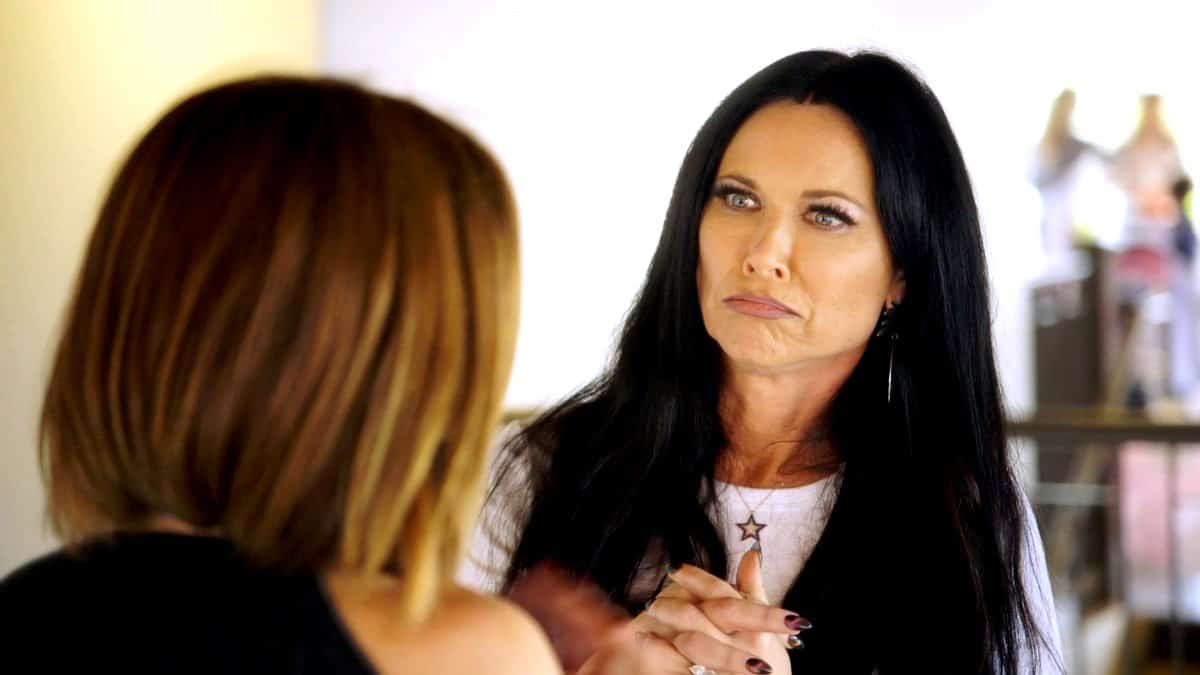 Kids and dogs are known to steal the show, but try as they might, nobody can steal the shine of the ladies of The Real Housewives of Dallas!   They returned last night, and were in rare form, as they brought their kids and pooches along for Kameron’s “dog painting party,” and while the kids and dogs painted, played, and even pooped on the floor, all eyes were on the drama.

When we picked up with the ladies, they all had family on their minds.  Kameron was teaching her children Spanish, Stephanie was learning to dance with hers, and Brandi was finally hiring a nanny to help deal with the stress of raising her ginger haired brood, while on the other side of town, D’Andra was dealing with the stress of dealing with her mother Dee.

These two have been going back and forth since–well, probably since D’Andra was born, and after 4 weeks of not talking since their last blow up, Dee came by to talk about their company.  As usual, within moments of being in Dee’s company, D’Andra was in tears, telling her mother that she wanted them to have a better relationship.  You see, Dee’s company is the parent company of D’Andra’s business, and while Dee had promised to hand over the reigns to her daughter, she went back on her word, and has remained at the helm.  It stresses D’Andra out–A LOT.  And why wouldn’t it? Dee’s pretty hard core.  D’Andra previously threatened to take her company, and start all over from scratch, which is a daunting undertaking, but one she’s willing to take on just to be out from her mothers thumb, and to finally, (at the age of 49) gain some independence.

While Dee told D’Andra to take her company and do whatever she wanted with it in the past, the tension between them was getting to her too.  D’Andra is her only child, and she can be overbearing at times, but she loves her daughter and wants to be close with her.  To that end, she announced (again) that she was giving full ownership and control of the business to D’Andra.  D’Andra was thrilled, but understandably suspicious, as they’ve done this dance before, and said she wouldn’t really believe it was true until she saw her mother’s signature on the dotted line. All the same, the women hugged and Dee wished her well, and said she’d get the lawyers started on the paperwork to hand the business over.

In the meantime, LeeAnne was making plans for her upcoming wedding.  The big day is planned for November—or sometime in the spring—or maybe next November.  Suffice to say, neither she nor Rich seem all that eager to walk down the aisle for some reason.  It makes sense, really.  Rich has been up to bat three times before, and he struck out each and every time.  As for LeeAnne? Well, she’s as unorthodox as they come, and she’s over 50.  If you ask me, if everyone would leave her alone and stop asking about when she’s going to tie the knot, she’d probably fine with the status quo… sharing a life and a home with Rich without any unnecessary paperwork or changing of last names, but that’s just not how these ladies roll, and for some reason, they need LeeAnne to get married, stat.

As Rich and LeeAnne discussed the wedding plans, and he told over and over again how he had done it all before, she lamented the fact that she hadn’t been in touch with D’Andra since their blowup at the Anger Room, during which D’Andra had angrily confronted her about talking to Cary about her money issues.  LeeAnne had apologized, and even managed to eek out a few crocodile tears, but D’Andra hadn’t bought it, and had been giving her the silent treatment ever since.  LeeAnne had been D’Andra’s maid of honor, and planning her wedding without D’Andra’s help was really getting to her.

Rich told LeeAnne that this was all nothing but “silly girl stuff,” and that she and D’Andra would be besties again in no time.  He advised her to just call D’Andra and squash this nonsense, but once again, her call went straight to voicemail. D’Andra was missing her too, but she just simply wasn’t ready to forgive and forget, and so LeeAnne would just have to wait.

As the ladies arrived for Kameron’s “dog painting party,” things were still visibly chilly between D’Andra and LeeAnne, and they actively ignored each other, as they all took part in the activities.  Now, just to be clear, they weren’t actually painting their dogs–they were painting portraits of their dogs.  All the same, it was a silly theme party, but these ladies will use any excuse to be over-the-top.  And boy, was it ever! There were special dog cupcakes, as well as cupcakes for the humans, and since they were on the same table, and all so beautifully adorned, LeeAnne mistakenly ate one from the canine offerings.  There was also a string quartet, as Kameron was well aware of the soothing effect that classical music had on both children and dogs.

The children and adults painted pictures of the dogs, and a good time was had by all–mostly.  Brandi was stressed by the behavior of her children, and was anxious to get back home to Baby Bruin, and as she took her leave, and said her goodbyes, Stephanie mentioned that she was planning to have lunch with LeeAnne and Kameron.  This clearly rubbed Brandi the wrong way, but she simply nodded and let it go.  LeeAnne and Kameron had both been judgmental toward her, as of late, and had even deemed her a “bad influence” in D’Andra’s life, but she simply wasn’t going to stoop to their level, and advise Stephanie against being friends with them.  They way she figured, Stephanie would soon find out all on her own exactly what type of women she was dealing with.

In the meantime, LeeAnne took advantage of Cary’s new policy of telling the women was saying being said about them behind their backs, and not keeping secrets about anyone’s trash talk.  She’s warned everyone about this policy, but they’ve stayed in her ear, all the same, and LeeAnne wanted to know what was being said about her.  Cary was happy to oblige.  She reported that Stephanie had been saying all good things, and that Kameron had wisely said nothing at all, but that Brandi had said that LeeAnne was badmouthing her to Kameron, and that since Kameron didn’t have a mind of her own, she’d been acting differently toward her.

This didn’t make LeeAnne happy at all, but she gave Cary the “credit” she asked for for being a good friend, and thanked her for the information.  However, she walked away more distrustful of Cary than ever.  Granted, she appreciated the information, but was Cary really as loyal as she claimed to be if she was so quick to throw her other friends under the bus?! Probably not.

The following day, LeeAnne finally got the call she’d been waiting for–D’Andra was ready to talk, and she was happy to oblige.  The ladies met for coffee, and caught up with each other.  When D’Andra told LeeAnne about her meeting with her mother, LeeAnne was as suspicious about Dee’s sudden change of heart as D’Andra had been.  LeeAnne said she wanted to help D’Andra out of this vicious cycle with her mother, but D’Andra said she could help herself. LeeAnne said that hearing her say that made her really sad.  And then, seemingly out of nowhere, D’Andra completely turned on LeeAnne, and demanded to know what was really going on with her and Rich!

LeeAnne insisted that everything was fine with Rich, and that they were planning the wedding.  But D’Andra was unimpressed with this news. LeeAnne had gossiped about her finances and it was now time for payback! These two love going tit for tat. So she asked if the fact that Rich had been married and divorce three times gave LeeAnne any pause, and while LeeAnne admitted that it did make her a bit uneasy, she assured D’Andra that this time was different for him, and that their marriage would last.  D’Andra was still suspicious, and asked if LeeAnne felt she could really trust Rich, and if she thought he was being faithful to her.  After all, D’Andra pointed out, they seemed to live separate lives.  She said even her husband, Jeremy, had mentioned that they spent a lot of time out at night without each other.

LeeAnne was starting to get angry at this point, but she kept her cool.  She again insisted that things were fine with Rich, and said that she was the one who was usually out at night, and Rich often just wanted to stay home, so she let him–nothing more.

The show faded to black with D’Andra still eyeing LeeAnne suspiciously, eager to get to the bottom of what was really happening in her non traditional relationship, and LeeAnne wondering where all this was coming from.  Trust me, this isn’t over.

When the ladies return next week, Brandi will get in on the act of questioning the true nature of LeeAnne and Rich’s relationship, which will lead to yet another showdown between them–and between LeeAnne and D’Andra, as Brandi’s sudden interest in LeeAnne’s relationship is sure to betray the fact that D’Andra’s been doing plenty of talking.  Stay tuned–this is about to get good!