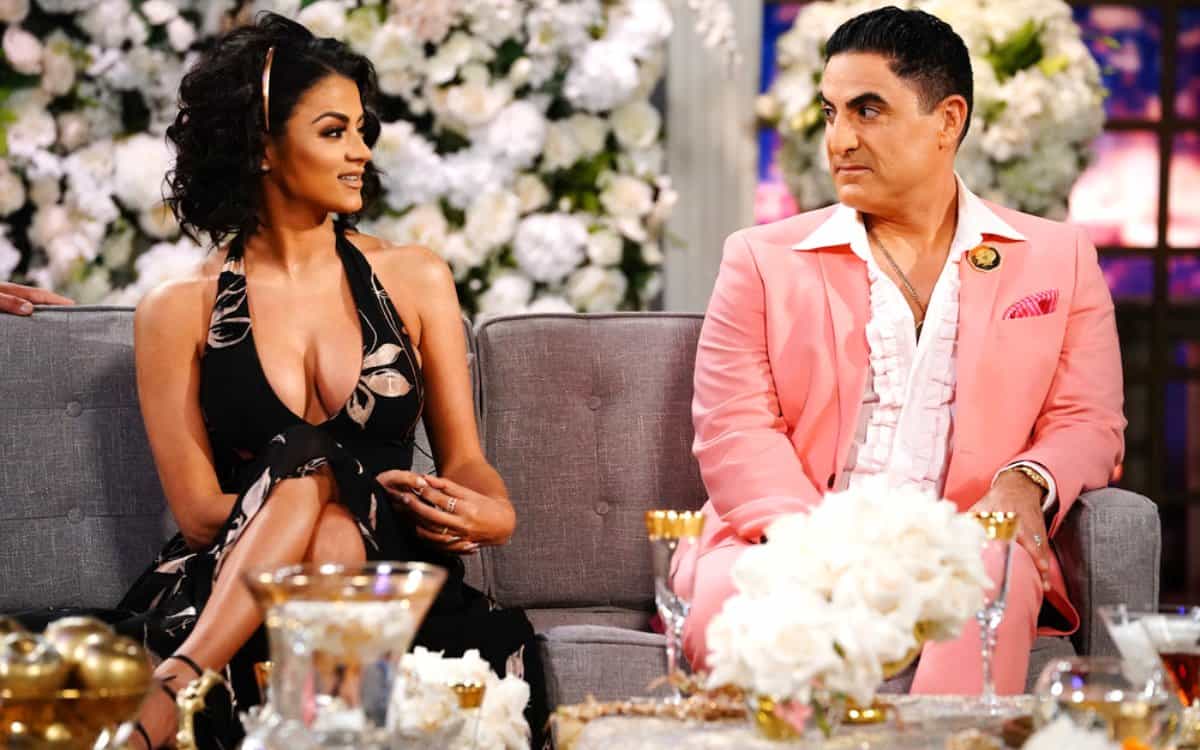 The posh Persian Posse of Shahs of Sunset was back for one more night to rehash season seven, as they reunited to rehash the good, the bad and the ugly from this past season.  When we picked up with the crew, GG had just stormed off the stage, after Reza and MJ laughed over the fact that they had purposely invited her ex husband, Shalom’s other former wife to MJ’s Valentine’s Day bash, and she revealed that their constant meddling and gossiping had lead to the lawsuit he had filed against her.

Of course no one was surprised at GG’s reaction.  It was hardly the first time she’d walked away in a huff, but it was the reunion, and there’s a certain protocol involved here, so host Andy Cohen encouraged her to come back to the stage.  She reluctantly agreed, saying that she didn’t quite trust her friends at the moment.  She explained that she felt they wanted to see her lose it, and that it would somehow be a “win” for them if she reverted back to her old ways, and went full blown “Lochnessa” right there on the reunion stage.

But when GG returned, MJ and Reza assured her that wasn’t true.  They said they only wanted the best for her, and surely didn’t want to see her get aggressive and out of control as she had so many times in the past.  Reza, however, seemed a bit tired of the drama.  He said that getting GG to open up was like pulling teeth, and that there always seemed to be some sort of legal reason why she couldn’t be totally up front with them.

Destiney was equally annoyed.  She too had gone backstage to talk to GG, and try to get her to come back to the stage, but had been brutally rebuffed.  She said it made her question what type of friendship she and GG actually had, and said “thank God I’m such a nice person and care so much.” This rubbed GG the wrong way, and she responded by saying she was thankful for anger management, so she didn’t go around punching people.

Destiney was shocked that she was acting that way (although I’m not sure why), but GG was certain that she was the true victim in the situation, so they dropped it, and the conversation quickly turned to Destiney’s other story line: her attempt to find her father, whom she hadn’t seen in over a decade. Destiney revealed that she’d made no further headway in finding her father, and broke down crying, as she explained that she just wanted to know that he was okay.  She hopes he’s seen the show, and that it will help her to reunite with him.

She also confronted Mike over the fact that he had tried to “out her” on Watch What Happens Live when he implied that she was a lesbian.  It was sort of hard to tell where he was going with this particular line of thinking because on one hand, he said that Destiney seemed to be really hard on men, and with him, in particular, she always had plenty to say about their shortcomings.  No surprise there, right? As Reza said, if a woman isn’t into Mike, he immediately writes her off as gay or crazy.  But here’s where his explanation got strange: he also said that Destiney is always ‘touching him inappropriately, which for some odd reason bolstered his misguided opinions about her sexuality.  Mike explained that he wasn’t actually trying to “out” her, and really just wanted her to know that regardless of who she chose to love, he’d always have her back.

While they were on the subject of Mike, they discussed his big break up with Morgan, and why he seemed to get so upset over Reza sharing the news with Shervin while they were all in Vegas for MJ’s bachelorette party.  It seemed like such an odd thing to get upset about.  If Morgan was moving out of his house, everyone was going to know about it eventually, so why be angry? Mike claimed it was because he was still in his feelings over his divorce from Jessica, and was having a difficult time processing yet another break up with a woman he loved.  MJ told him that he needed to get out of “Jessica Land,” and admonished him for wasting the time of good woman like Morgan.  He insisted he hadn’t been trying to waste her time, and that just because he hadn’t introduced her to his parents yet didn’t mean he wasn’t serious about the relationship. He also apologized to MJ for “slut shaming” her during their argument, and saying she’d had “half the city.”

At that point, GG piped up to say that they all needed to start exercising more boundaries with each other, which might not be a bad idea, but I don’t see it happening with this group.  Plus, she wasn’t exactly good at respecting boundaries when it came to Nema, am I right? Poor guy never stood a chance.  She flirted with him shamelessly the entire season, and last night, she admitted that she’d only been playing with him.  Nema said that was a “load of s***,” but GG said that it’s not uncommon for people to think that if they feel a certain way about someone those feelings are reciprocated. But the question on viewers’ minds was whether or not Nema had really had feelings for GG at all, or if he was just trying to create a juicy story line for himself.  Reza and Mike wondered the same thing–and GG said she did too.  It was a direct contradiction of what she’d just said, but let’s give her a break, shall we? She was high.

Anyway, Nema said that he was genuinely attracted to GG, and was really starting to like her, but that after they stopped filming she began saying horrible things about him and his family on social media, including a very disturbing suggestion she had for what his sister, Mona, could to do him with her hand.  I’ll spare you the details, but the bottom line is Nema wasn’t there for all of GG’s drama and games.  He said he’d seen “Lochnessa” in clips from the show, but had experienced a much sweeter side to her while they were filming, and was shocked when she seemed to change.  But he’s not angry. He said it simply didn’t work out for them, and that was fine, although for some reason, his calmness really upset GG for a moment, and she began loudly mimicking him.  It was odd, which is probably why all of her friends are concerned with the way the green stuff is starting to affect her.

GG says she’s fine, and that everything is going great, but her friends disagree.  MJ said that she smokes so much pot that she can’t even “feel real life” anymore, but GG says that’s not the case at all.  She said her cannabis business is booming, she’s been keeping her temper under control, and that she’s planning on getting pregnant soon.  This was news to her friends, but they looked more than a little concerned, especially when she said that she had consulted her doctor, and would still smoke “to a degree” while she was pregnant.  Looking at their horrified faces, she assured her friends that she was going to do it “the right way.”

But speaking of pregnancies, MJ had some amazing news to share…she and Bobby are having a baby!  She had just told her mother backstage and of course Reza was in the loop, but otherwise, her friends didn’t know she was pregnant, but they all said they had suspected something was up when MJ hadn’t wanted to drink or be out much in recent weeks.  She and Tommy seem thrilled, and I’m sure Vida will make a wonderful grandma.

Well, viewers, there were some crazy moments, but in the end, the season came to a close on a high note with everyone wishing each other well and celebrating their crazy friendship that they wouldn’t change for anything in the world. It’s truly been a pleasure Shahs — see you next season!