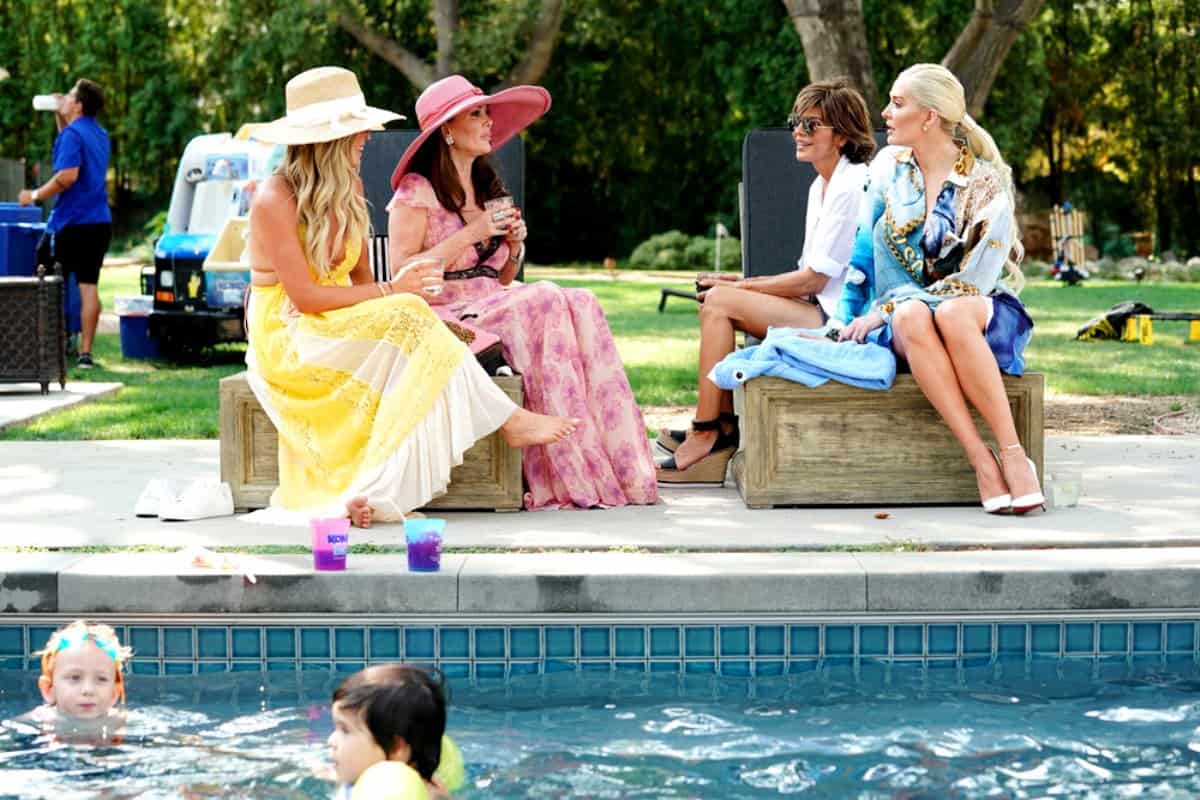 Season 9 – We have waited. We have stalked social media. We have read articles. We know that friendships have been shaken up. But now it’s time to watch it all unfold on the season opener of The Real Housewives of Beverly Hills.

A dramatic fight between Lisa Vanderpump and Kyle Richards opens the episode. But it wasn’t always a war between these two ladies. What we don’t know is how these once best friends got to this breaking point….

Two months earlier…
Kyle is making breakfast for her hottie husband Mauricio and daughter Sophia. She sends a text to the girls about her upcoming pool party and we get a glimpse into their day-to-day routines. Lisa Rinna runs amuck in her home yelling to her bratty “model” daughters. LVP plays with her doggies. Dorit Kemsley still needs closed captioning to be understood and Teddi Mellencamp is still holding people “accountable,” including her own children. Teddi’s excited to share that they’ve recently moved 5 houses down from their old house and she is loving life. Her accountability business is growing and it’s looking great for her.

Rinna has decided to attend goat yoga with her daughters because she is desperate to spend any time she can with her girls. Because they are models, they aren’t around often, in case you forgot. Delilah can’t cut it in NYC, so she is relocating back to the west coast. Rinna is over the moon, but has promised to “take a step back.” LOL. She can’t help herself…calling her a helicopter mom is an understatement.

Life at LVP’s is unreal. She prances around feeding her ponies and gets served biscuits and tea by her hubby, Ken. Giggy, her pride and joy dog, has had ailing health and it’s gut-wrenching to watch the couple discuss the recent passing of LVP’s brother. Lisa shares that she is having a difficult time moving on and it’s very unlike her to let her guard down. We are used to the British stoicism, so when LVP begins to cry, it is out of character.

Does Kyle look super different this season or is it just me? I mean, I see the haircut and the new teeth, but something is off. Seems like Teddi is her BFF this season… the girls enjoy working out and trying to top one another with their new houses. It’s a funny duo. YAS. The queen herself is back this season:

Erika Jayne. Her pants are tighter. Her hair is bigger. And she just keeps getting better. Erika is hosting Dorit, and the ladies talk about Dorit’s recent burglary. Dorit explains that the robbers took everything, so she needed to pull herself out of the funk. Therefore, she climbed a mountain in Utah??? Whatever. As long as it was the spiritual awakening Dorit was looking for, then so be it.

Over at Vanderpump Dogs, Teddi and her daughter Slate play with the puppies and chat about her upcoming charity event with LVP and Kyle. The convo takes a sharp turn when the topic of Lucy the dog comes up. Dorit adopted this puppy from Vanderpump’s store. Dorit then gave the dog away to someone who later took it to a shelter. Turns out that the shelter called LVP to alert her that the dog was returned. LVP is livid and acting strange about the whole Lucy the dog situation because she feels as though Dorit went behind her back. Teddi and Kyle are now in on this hush-hush tale, even though no one was supposed to find out about the shelter scandal. Suuuure.

As if one set of drama with one woman is not enough, LVP has decided to bring up her beef with Kyle. Lisa opened a new restaurant, TomTom, (hello Vanderpump Rules!) and she is annoyed that Kyle did not attend the Daily Mail event that was held there. Kyle refuses to be bullied by LVP and storms out of Vanderpump Dogs in order to squelch the argument before it escalates.

Kyle says she is tired of having Lisa making her look bad when she hasn’t actually done anything wrong. Teddi attempts to be the peacemaker and luckily, the fight ends abruptly as LVP breaks into tears. Clearly, she has some issues to work through and is experiencing some serious ups and downs since the loss of her brother. Well, that was emotionally draining.

Denise Richards in the house! Well, actually, she is in Rinna’s house for some afternoon drinks and girl talk. This is Denise’s chance to get introduced to some of the women and to test the waters to find out if she will really fit in with this crew. The small talk is great, but a total snooze. It’s only until Denise talks about her ex, Charlie Sheen, that the group becomes animated. It appears as though Denise is going to do just fine with this group.

Later, it’s double date time: PK and Dorit join Ken and LVP for a meal. LVP chooses to “clear this dog thing” and PK immediately becomes defensive. Dorit cannot seem to understand why Lisa is disappointed in her, but LVP does not let it go. Dorit admits that she DID sign the contract which stated should the dog need to be returned, it should be brought directly back to Vanderpump Dogs. Dorit demands to know who knows about the whole debacle, and when she finds out that Teddi is talking about this “private matter” to others, she gets upset. She is also annoyed that suddenly LVP seems more upset about Lucy than their friendship.

It’s the day of Kyle’s pool party…this isn’t your average pool party. No, no. There’s a charcuterie board the size of California, lifeguards on duty, and flower arrangements that should be for a wedding. Everyone is there, even Camille. This also happens to be Denise’s debut with friends. I actually found out that Denise and Kyle go way back to a “Hollywood moms group.” God, what I would give to be a part of that group…OMG- Dorit’s outfit at the pool party. It’s like Vegas dealer meets Daisy Duke. I can’t deal with that visor…or that hairdo for that matter.

Everyone is dancing around the whole Lucy-the-dog-going-to-the-shelter issue, but somehow Dorit makes it out of the party unscathed. Denise and LVP begin to bond over adoption while Rinna and Erica bond over hot dogs. Just your usual BBQ chat. The gals all powwow and Teddi makes a slip that causes all of the ladies to hoot and howl. Remember when Charlie Sheen used to say #winning? Yea, well Teddi said “winning” in front of Denise Richards and she felt like a total tool. “Who knew saying the word winning would make me look like a loser?” The party wraps up just as Teddi’s son relieves himself in Kyle’s pool and the episode ends rather uneventfully. However, the season promises to be full of all the things we love best: drama and fights. Looking forward to it!

TELL US – WHAT ARE YOUR THOUGHTS ON THE RHOBH RECAP & SEASON PREMIERE EPISODE?