Nicollette Sheridan Fires Back at RHOBH’s Lisa Rinna for Saying She Cheated on Harry Hamlin! Plus Rinna Says Lisa Vanderpump Gets Preferential Treatment from Bravo 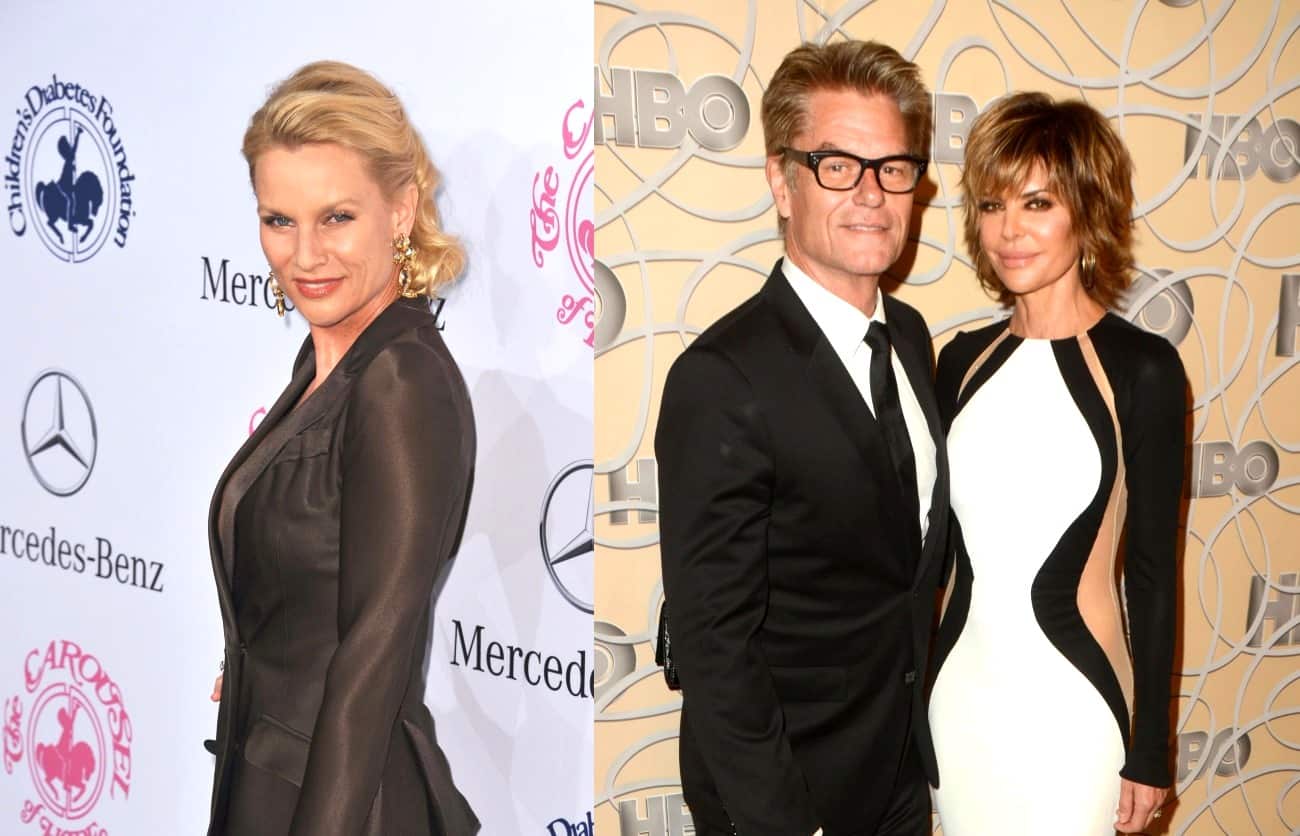 Actress Nicollette Sheridan is firing back at Lisa Rinna for claiming she cheated on Harry Hamlin during their brief marriage.

See, once upon a time, Nicollette was married to Harry in 1991 before they ultimately called it quits after Harry filed for divorce less than a year later.  Following their divorce, Harry married Real Housewives of Beverly Hills star Rinna, as the couple would go on to have two daughters together.

However, on the latest episode of the RHOBH, Rinna alleged that Nicollette cheated on Harry with singer Michael Bolton, and that her infidelity is what led to the divorce. Nicollette’s name actually came up because, fun fact, she was also briefly married to Denise Richards‘ current husband Aaron Phypers. 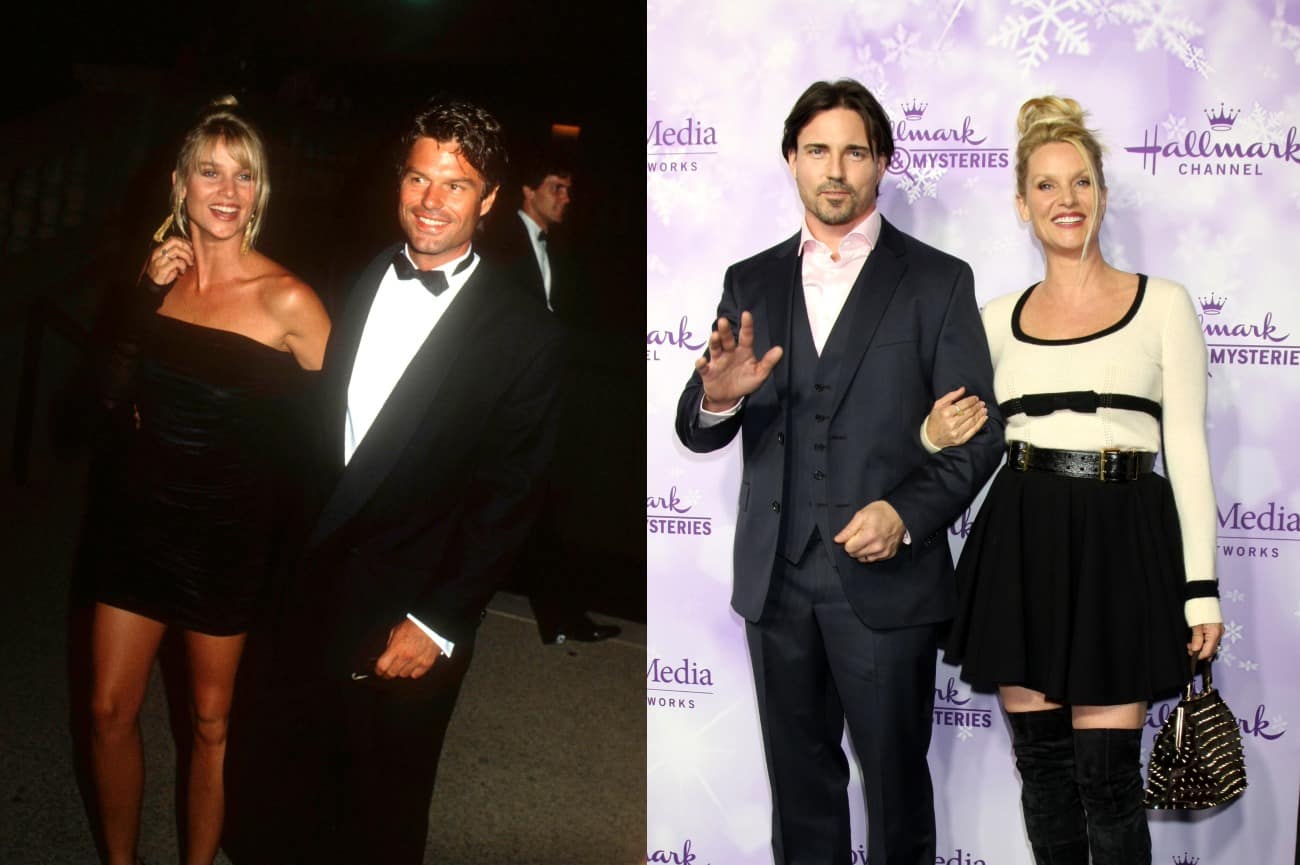 In a Tweet on Friday evening, Nicollette appears to deny any claims of infidelity on her part, calling it “fake news.”

“FAKE NEWS! Harry and I ended our marriage nose to nose in Canada,” wrote Nicollette. “Michael was a long time friend that was invited to our wedding…Happy Harry found happiness with housewife.” 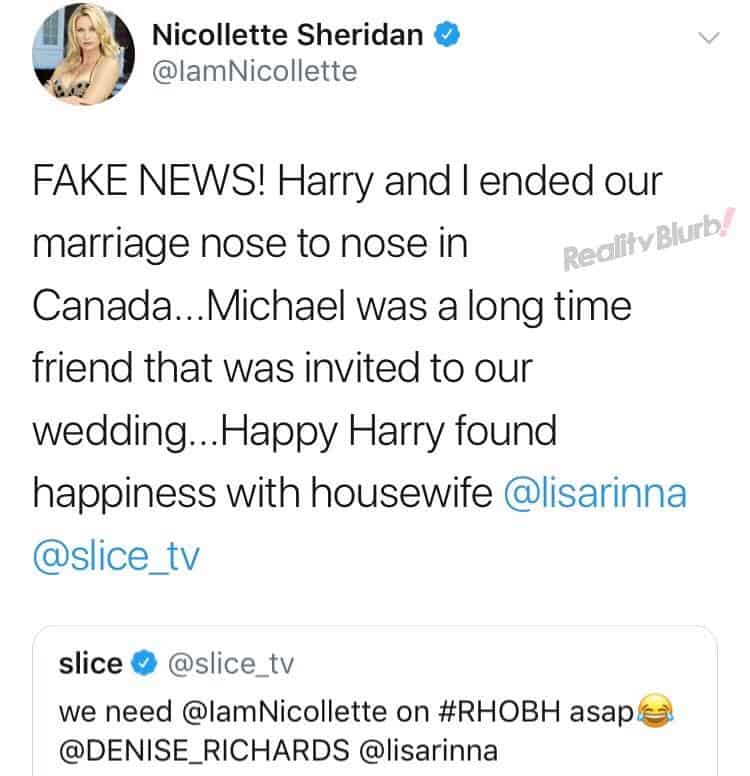 So, yes, Nicollette used to be married to two of the husbands on the RHOBH, which we assume now puts her chances of getting an offer from Andy Cohen for next season at 99.9899%! Did we mention Nicollette also used to star on the popular hit series Desperate Housewives, which is rumored to have inspired the Real Housewives franchise? Perhaps her chances of being offered a role on the RHOBH just went up to 100%!

In more RHOBH news, Rinna is taking aim at Lisa Vanderpump, as she accuses the Bravo network of giving the restaurateur preferential treatment.

During an appearance on The Jenny McCarthy Show on Thursday, Rinna wondered why Lisa faced zero consequences for refusing to film with her castmates for two months amid a nasty feud. This feud took place months after the passing of Lisa’s brother, Mark, who died of an overdose in May 2018.

“To not show up for work and not contact any of us for two and a half months? I’m so disappointed in that behavior, cause I would imagine, she’s got 400 employees, I can imagine if one of her employees did that, they’d be fired,” said Rinna. “So, the fact that Bravo took no [action], there were no consequences. She’s just able to do that.”

Echoing recent comments by Teddi Mellencamp, Rinna mentioned the fact that Lisa filmed her other Bravo series, Vanderpump Rules, for months before filming started on the RHOBH season 9.

“She shot a whole season of Vanderpump Rules before she came to do our show… so why can you do that but all of a sudden you can’t do our show?” Rinna asked.

“She has another show on Bravo. It’s not a fair playing field. I’m sorry, it’s not,” she continued. “I think if the tables were turned and it was me, you know, my father passed away while I was filming the show, and I filmed the show. And I showed up. I think if it was me, I would be fired.”

TELL US – THOUGHTS ON NICOLLETTE’S TWEETS?