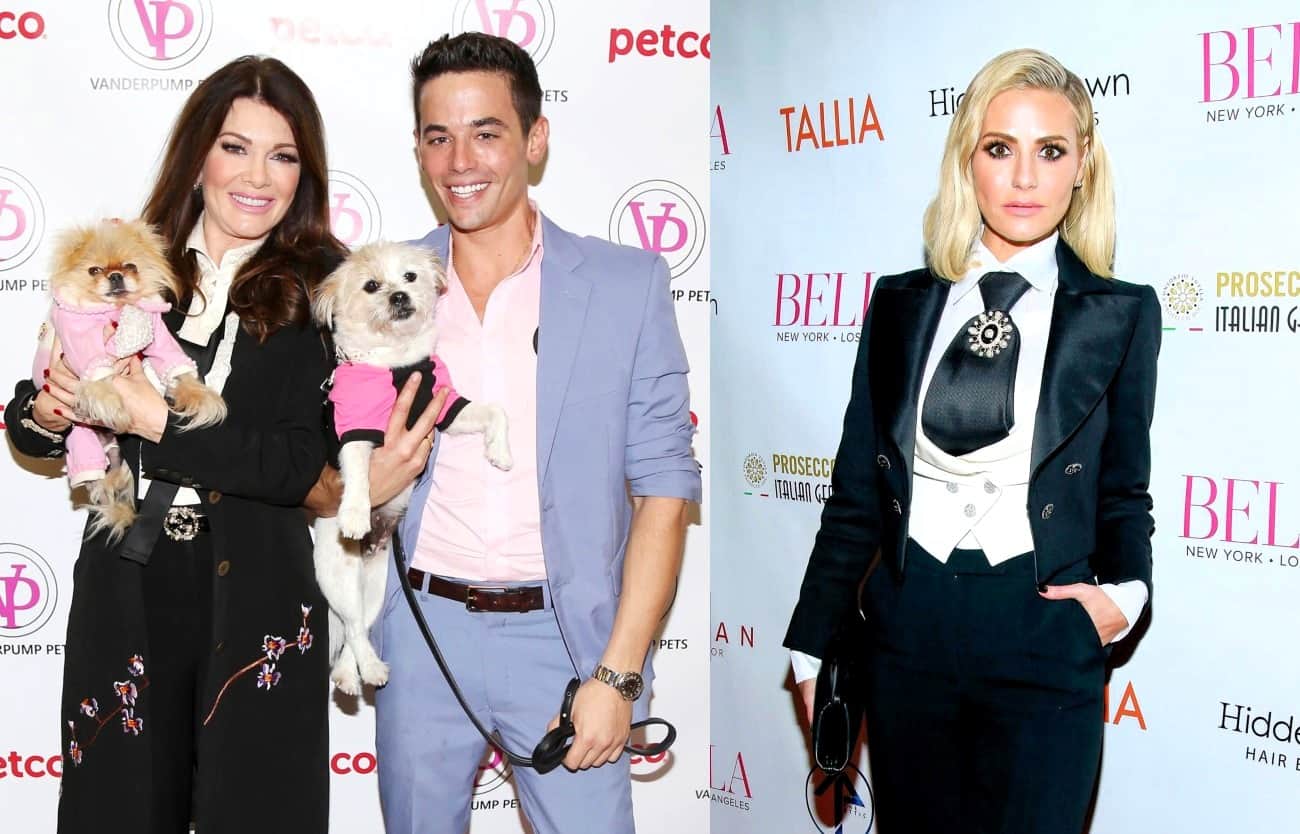 John Sessa is speaking out in defense of his business partner, Lisa Vanderpump.

During an appearance on the On the Rocks Radio Show with Alexander Rodriguez podcast on Tuesday, John shared new details regarding the ongoing drama of The Real Housewives of Beverly Hills, which is currently based around Dorit Kemsley and a dog she adopted from Vanderpump Dogs.

“The sequence of how everything went down was very different,” he revealed of the first moments of season nine.

According to John, who works as the executive director of Vanderpump Dogs, Lisa wasn’t “up to speed” when filming began on the RHOBH and he was there with her to try and help out.

Although Teddi Mellencamp has suggested Lisa planned to kick off a negative storyline about Dorit and her decision to give her chihuahua to another woman during the premiere episode of the new season, John said he could prove her timeline is off with emails.

“It’s not true, the timeline. I have emails. So, if you want receipts, Lisa Rinna, I can give you some receipts,” he shared. “On the Wednesday, before we were filming, I had to sign all the location agreements. The location agreement had to happen on a Wednesday. I got word on Sunday that one of my dogs had ended up in a kill shelter.”

John told listeners that while the doggy drama of season nine has been based around a dog named Lucy, Lucy was actually the second dog Dorit adopted from Vanderpump Dogs but didn’t keep. As for the other dog, a Yorkshire terrier named Madison, Dorit reportedly returned the pup to the rescue center a couple of weeks later and said she was “not going to work out with the family.” She also claimed the animal was biting her family, which was, as John explained, “similar to what she said the second time around.”

While Dorit claimed the animal was a danger to her family, specifically her young children, John used air-quotes when describing the alleged “biting.” He also said he wasn’t sure if he believed Dorit’s story about the animal.

“I’m not sure what happened. I did see there was a photo with bite marks on PK’s nose,” he said.

As for the second dog Dorit adopted, Lucy, John began to suspect something was wrong after his adoption coordinator, Hannah, reached out to Dorit on two occasions to check on the dog but got “no response.”

Continuing on to the hosts of the podcast, John revealed he and Hannah were extra involved with Dorit’s second adoption, adding that Lucy was not a rescue dog.

“I have Hannah over here who trained the dog, I hand-reared the second dog from a nursery at my house. Because I’m like, ‘Okay, let’s not give Dorit a rescue dog. Let’s give her a dog that I’ve hand-reared who has never had any issues,’” he recalled. “This is a dog that was born in my house, bottle-fed by me… Hannah spent three weeks training Dorit on how to take care of the dog. We took the dog back for neutering. We never do any of this, just so you know.”

As fans of The Real Housewives of Beverly Hills well know, Dorit’s second adopted dog, Lucy, ultimately ended up in a kill shelter in Orange County, where she was chipped and returned to Vanderpump Dogs.

Immediately upon hearing the news of Lucy’s whereabouts, John went to Lisa and Ken Todd‘s home.

“I don’t think Dorit did the right thing. I think she should have brought the dog back to us,” he continued. “We are all philanthropists. We are all big-hearted people. If Dorit were to come down to our place and say, ‘I f**ked up and I’m sorry,’ we would have said, ‘Ok, let’s deal with this.’”

Instead, Dorit sent her assistant to Vanderpump Dogs to discuss the matter and failed to pay the $5,000 fine due from those who don’t return their animals to the rescue center.

According to John, the incident has caused tension between him and Lisa and at one point, he and Ken got into a heated argument.

John went on to reveal that while Lisa did attempt to shut down the story about Dorit and her dog, he wasn’t ready to let it go away and never felt she should receive special treatment due to her celebrity status.

“How am I supposed to be an executive director for a foundation that is international and say, ‘Oh, when something bad happens and it involves a celebrity, we just push that under the rug?’ It doesn’t work,” he said.

John then took aim at the “mean girls” of the RHOBH, who he claims should have been more compassionate towards Lisa.

“Lisa needed her friends. Kyle has been her best friend, one of her best friends for over a decade,” he noted. “When your brother dies, you are opening all of the stuff. You really need your friends around you and I think this season was a time that they could have really moved around her and said, ‘Listen, you are one of the OGs and we’ve got your back,’ whereas before, they said, ‘Lisa’s finally weak. Let’s get her while she’s down.’ And it was like ‘Mean Girls.’”

John also dropped a final bombshell in the interview when he insinuated that Dorit herself might have been the person who took to the dog to the shelter. According to John, they were told by the shelter that the dog was brought in by a “reality celebrity” although they did not use Dorit’s name.