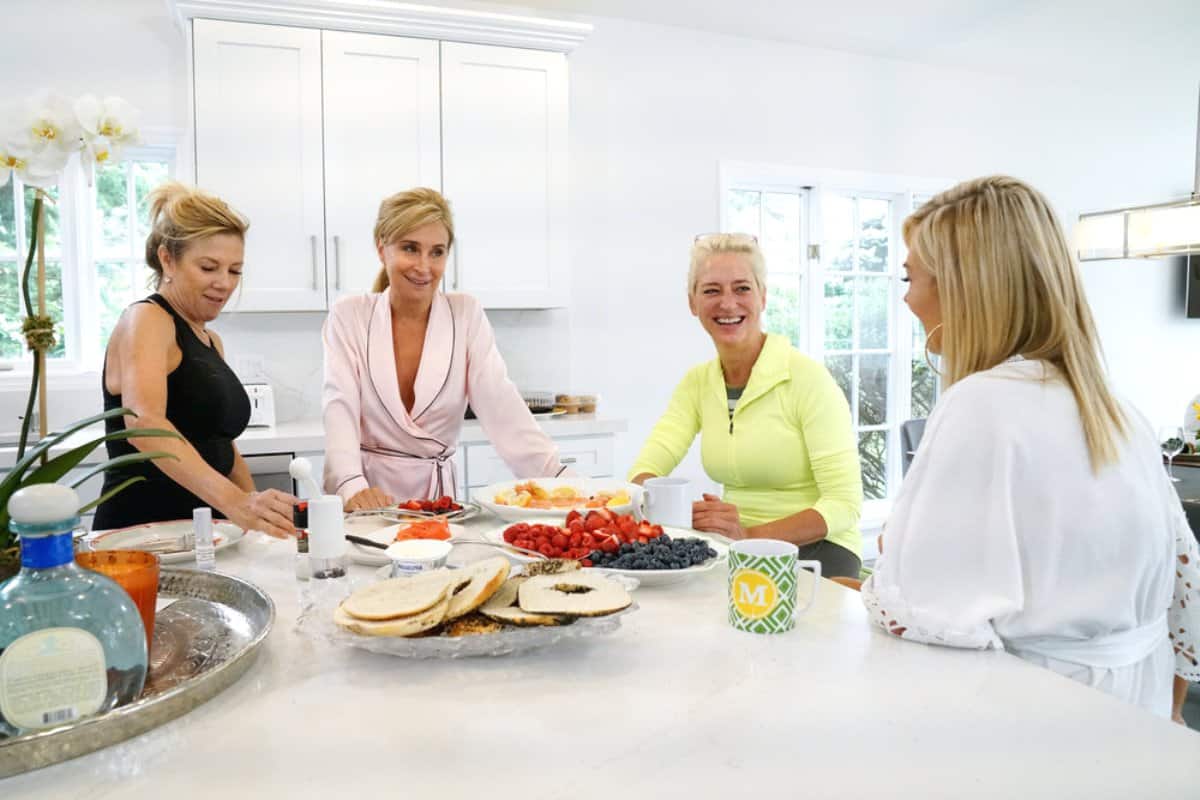 The ladies of The Real Housewives of New York returned last night, as the show kicked off its landmark 11th season.  Now, if you live on the east coast, and you’re suffering from the winter blues, take heart, because at least it’s summer in New York City! It was good getting reacquainted with the ladies, as they’ve all been through a lot since we saw them last.

Of course, all change is not a good change. Bethenny, while trying to be strong, was clearly still reeling from the sudden death of her on again-off again boyfriend, Dennis Shields.  When we picked up with Bethenny, it had only been three weeks since Dennis’ apparent over-dose, and Bethenny was feeling raw.  She described hearing about his death from his daughter, and screaming into the phone, as she listened to the devastating news.

She asked her friends when she’d finally feel better, and even said that time was already beginning to heal her, but that she also felt guilty for moving on without him.  And after three weeks, how could she possibly move on? After all, she and Dennis were in love and planning a future together one day, and the next, with no warning, whatsoever, he was gone.  She even revealed that she and her daughter, Brynn were still sending him texts in a futile effort to reclaim some sort of contact.

Luann was trying her best to move on too, following her second stint in rehab.  She happily reported to her friend, and new cast mate, Barbara Kavovit, that she was 53 days sober. But the road to sobriety has been a rocky one.  Luann expressed regret over the toll her drinking had taken on her relationships with her children, and the messy lawsuit they filed against her, which she said put her over the edge. Happily, she  reported that she was in a better place with both her son and her daughter, and was still enjoying her cabaret act, which will be back in full swing this season.

Dorinda was also trying the sober life–and it looks good on her.  She looks healthier, her eyes are clearer, and hopefully, we won’t be having any more outbursts.  Well, that’s probably too much to ask for, but a girl can dream, right?  But Dorinda is still feeling the hurt from the nastiness between her and her former bestie, Luann last season.  As I said, it’s summer in the big apple, and Dorinda said the two haven’t spoken since March!

As for Sonya, well, she’s still Sonya–and we love her for it! This show can use some comic relief, and we can always count on our girl.  She’s recently moved into a new Park Ave apartment, and is enjoying the new easy breezy lifestyle her new bachelorette pad affords her.  She’s bonding with her poodle and spending time in the park.  But while the new apartment is glamorous, and she still has a housekeeper to bring her peanut butter toast in bed every morning, our girl is still a mess!

She hasn’t painted the place yet, and is waiting until that’s done before she hangs curtains or blinds, so for now, she’s duct-taped a towel to the window to stop the people in the restaurant across the street from peeking in at her.  But don’t worry, folks, it’s a monogrammed towel, so it’s “classy!” Lol!! Never change, Sonja!

And for better, or for worse (I’ll take worse), Ramona hasn’t changed a bit, either.  The ladies’ scare on the boat during their trip last year has inspired her to take swimming lessons.  It seems she didn’t realize she couldn’t swim until her life passed before her eyes, and she’s vowed never to be in that position again.  I’m not sure how good of a swimmer she’s going to be, though, since she spent the entire lesson floating on a pool noodle, while batting her eyes, and flirting with her handsome instructor.

Also still singing the same old song is Tinsley. She’s still hoping to marry her on again-off again beau, Scott.  Yes, we’re still on that storyline.  What’s it been–about three seasons now?  But our girl is just as optimistic as ever that Scott will be popping the question any day now.  She spent most of the summer playing house with him in Chicago, and being hostess at his dinner parties, and she’s quite sure they’re now “on the same page” because he knows exactly what style and size engagement ring she prefers.

Well, so do I…big and expensive, but I don’t plan on proposing, either.  But Scott may be coming around, after all.  He sent his Bentley up to NYC so that Tinsley would have a car at her disposal, and that’s something, right? Or is it just a big toy meant to appease her and keep her from dragging him down the aisle?  Only time will tell, but I hope he’s got good insurance, because Tinsley admitted that she hasn’t driven in five years–and it shows!

Later on, Bethenny and Ramona had dueling parties out in the Hamptons.  Luann and newbie, Barbara attended Bethenny’s get together, while Sonja, Tinsley, and Dorinda headed to Ramona’s place.  But while they were on opposite ends of the island, they weren’t far from each other’s minds, and talk mostly centered around those that were absent.  Dorinda, the first to arrive at Ramona’s talked about how hurt she was about the demise of her friendship with Luann, but Ramona told her that Luann probably still wasn’t ‘in the best place,’ emotionally, and suggested that Dorinda just give it time.

Little did Ramona know that Luann was no happier with her than she was with Dorinda.  Luann is still angry over allegations that Ramona made during last seasons’ reunion about Luann’s drunken behavior, including claims she made about her getting booted out of a party.  Luann said this never happened, and Barbara backed her up, saying that they’d attended the part in question together, and that Luann had actually chosen to leave because of the drunken behavior of the other party goers.

When Barbara mentioned that she would be throwing a clam bake soon, and intended to invite Ramona, Luann groaned, and Bethenny suggested that she may want to leave Ramona off of the guest list if it was going to bother Luann.  Barbara agreed with this, as she’s known Luann longer than any of the other ladies, and Ramona had a habit of acting as though she didn’t know Barbara when they ran into each other, despite having met her at least a dozen times.

Oh boy, viewers, here we go! The drama is just getting started, and the scenes from this season look pretty intense. Stay tuned!

TELL US – THOUGHTS ON THE RHONY SEASON PREMIERE?