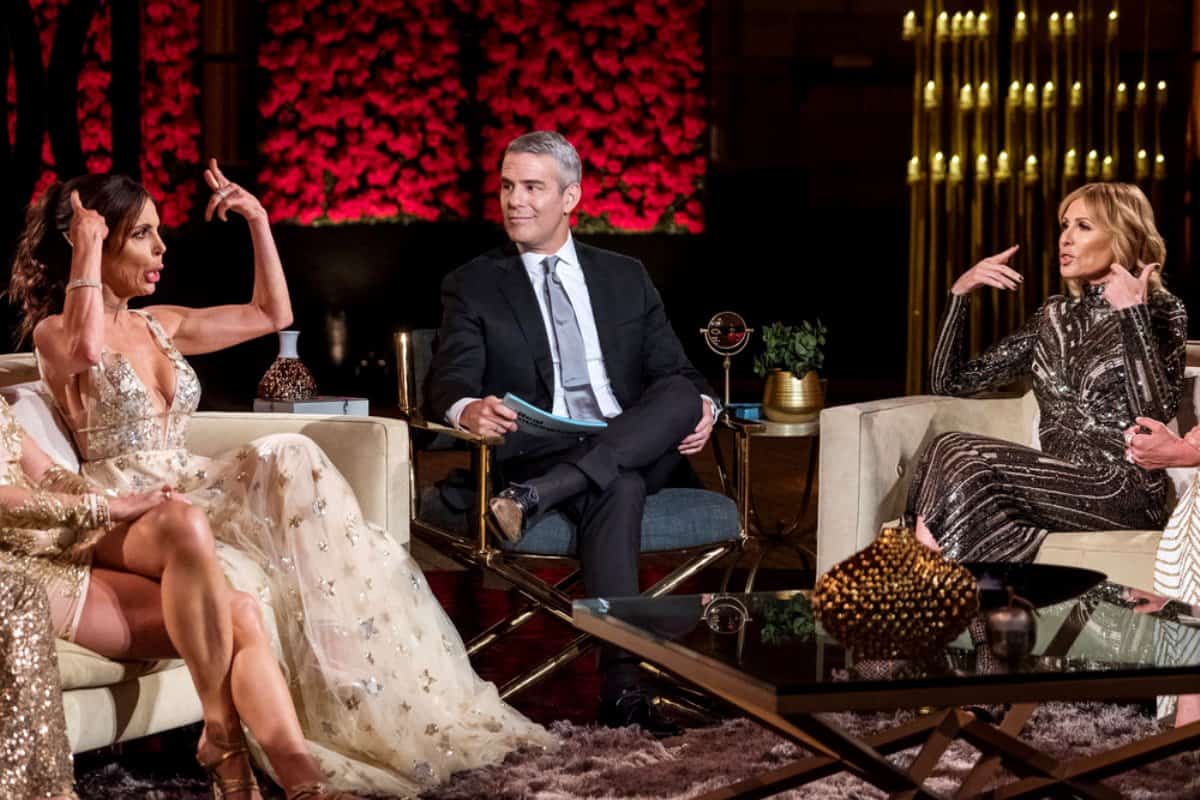 I once read a  study that claimed the average woman says around 20,000 words per day, but I’m convinced that Bethenny Frankel says at least five times that many. It’s why she’s such a “skinny girl,” she never stops talking long enough to actually use her mouth to ingest food!

If last night’s second installment of The Real Housewives of New York season 10 reunion had a pithy, little title like the other episodes do, it would have simply been “Bethenny Said a Lot of Words.”  And that’s really all that happened…Bethenny talked, incessantly.  Even when they weren’t talking about Bethenny, the conversation somehow became about Bethenny because she. just. kept. talking.

The show picked up where it left off last week, with Dorinda talking about whether or not she had “a problem” with alcohol, a subject Bethenny brought up, as she complained about Dorinda’s out of control behavior throughout the season.

Dorinda admitted that alcohol had “become an issue” for her, but said that she was committed to therapy, and had ‘talked to her mom,’ and felt like she had things under control.  She added that she didn’t need to seek treatment as Luann had suggested.  This, of course, let to a discussion about the argument Dorinda and Luann had in Cartagena, during which Dorinda threw Luann’s arrest in her face, after she suggested that Dorinda ease up on her drinking.

It was definitely one of the uglier moments of the season, and last night, Dorinda said she still regretted hurting Luann. But she also said that she felt Luann owed her an apology, too, because it was beyond hypocritical for Luann, fresh from her first stint in rehab, to comment on anyone else’s drinking, and I’ll actually give Dorinda this one…sort of.  Yes, it was hypocritical, but at the same time, who better to notice a problem than someone with the same problem? And let’s face it, Dorinda had her share of messy, drunken moments this season.

But then Dorinda made an interesting claim about that evening.  She said she was completely sober when she brought up Luann’s arrest! I’m not sure if she thought this was somehow better, but it definitely wasn’t.  And, of course, Bethenny took issue with it, and insisted that Dorinda, had, in fact, been drinking leading up to the argument.  Ramona tried to come to Dorinda’s defense, and backed up her claim of sobriety…but, of course, Bethenny took issue with that, as well.  She said that Ramona was obviously on some “program” wherein she couldn’t disagree with Dorinda, but pointed out that she had said exactly the opposite on the night in question, and sure enough, when Andy went to the tape, Ramona could clearly be heard telling Dorinda that she ‘shouldn’t have any more to drink.’

Dorinda continued to say that she had her drinking under control, and didn’t need to go into rehab, but that if she ever did, it would be because she had made the decisions to do so on her own, unlike Luann, whom she said only went to rehab to “avoid jail time.”  Bethenny said that they all could have been more sensitive to Luann during that time, but Dorinda said that she had been sensitive to Luann 24/7 for the entire 15 years of their friendship, and had been her biggest supporter throughout the ordeal of her arrest.

At this point, Sonja, who had been strangely quiet throughout the reunion,  tried to jump in to defend Luann, but Dorinda quickly shut her down, telling her to “shut up,” and Carole chimed in to say that Sonja was the “last person” who should be talking about anyone’s drinking.  It seemed a bit unnecessary for them to come at Sonja so hard, but it worked, as it was pretty much the last we heard of Sonja for the rest of the night.

Andy quickly moved on to the finale episode, and Dorinda screaming out “Jovani” during Luann’s cabaret act.  Dorinda insisted that she wasn’t being rude, and had only been trying to give a shout out to the Jovani designs Luann was wearing.  Andy pointed out that is seemed like she’d been “heckling” Luann, and Bethenny agreed, and proceeded to do hilarious, and pitch perfect imitation of Dorinda drunkenly slurring “Jovani” over and over again.  Dorinda said it hadn’t been that way at all…but it really was.

Of course, Luann, who was in rehab for the second time during the taping of the reunion, wasn’t there to tell her side of the story, but when they discussed her relapse, all of the women admitted that they’d known she’d fallen off the wagon.  Ramona recalled two recent events where Luann had been asked to leave because she’d gotten drunk and sloppy, and the other women agreed that things had taken a downward spiral.

Bethenny said that the weekend leading up to the reunion had been particularly tough on Luann, and it had become clear to everyone who knew her that she’d “taken a turn,” and that the lawsuit filed against her by her children and ex husband certainly “hadn’t helped.” She said she’d been in close contact with Luann, as she’d connected her with her boyfriend, Dennis, who had been giving her legal advice, and knew that Luann was devastated by the lawsuit.  However, she also said that she’d spoken to Luann’s son, Noel, and was certain that the legal matter would be “resolved” soon.

The women all agreed that the lawsuit had been a sore subject for Luann, and Ramona said it was the “straw that broke the camel’s back,” but that it had been a tough year for Luann, all the way around, starting with her divorce from Tom, and her efforts to convince everyone she was “fine” following the split.

Ramona recalled telling Luann some things she knew about Tom off camera, while they were in Mexico, and said it had actually caused Luann to fall down.  Andy pointed out that it was likely the “18 tequilas” that had made Luann fall, but Ramona contended that she never would have had those tequilas if she hadn’t been so upset about Ramona’s news about Tom.

When Andy asked what Bethenny thought Luann would have wanted to say if she’d been at the reunion, Bethenny said first and foremost, Luann would want to set the record straight, and make it clear that she would never “steal” from her children.  She added that Luann had really wanted to be at the reunion, and had “a lot to say.”

And speaking of a lot to say, it was time to delve into the Bethenny/Carole drama.  During the finale, Carole had said that she felt she and Bethenny would get back to their “sweet spot,” but it was clear that had never happened.  Bethenny said they were on “different pages.”  Carole said that she had wanted to get “back to normal” with Bethenny, but felt that Bethenny hadn’t wanted that, and had continued being rude and condescending to her.

They rehashed the whole sordid ordeal leading to the demise of their friendship…ad nauseam.  Apparently, a dear friend of Carole’s had been grieving, following the loss of her husband, and Carole had spent the majority of the summer leading up to season 10 comforting her, and Bethenny had felt left out.  She recalled a time that she’d picked Carole up to have dinner, and had been left waiting in the car, instead of being asked inside.  Carole tried to explain that it had only been because she was at her friend’s homes at the time, and that the woman hadn’t been up for visitors.

Carole said she had actually been in almost constant contact with Bethenny, and had even tried to help Bethenny get a private plane to get to Puerto Rico, but then she’d heard about all the negative things Bethenny had said to Dorinda about her ex boyfriend, Adam, and became angry, and decided to take a step back.  Bethenny said that she thought Carole and Adam had broken up, and, therefore, hadn’t thought the things she said about Adam would be a problem.

Carole said that Bethenny had said horrible things about her, as well.  Bethenny said that she hadn’t, and that Carole had been the to say horrible things.  Andy pointed out that they’d actually both said plenty of horrible things, and once again, he went to the tape.  Sure enough, there was plenty of footage of Carole and Bethenny talking trash behind each other’s backs.

Carole said she never spoke negatively about Bethenny until it became “excruciating,” because all Bethenny did was “bully, brag, and bitch.”  They both brought receipts. 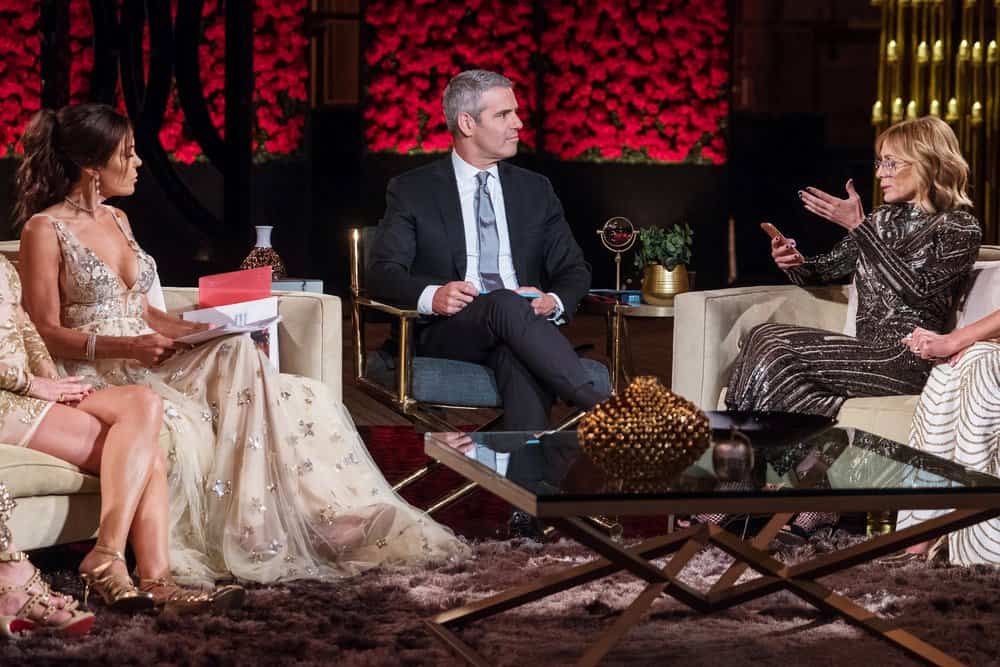 Carole read from several text messages Bethenny had sent, which contained a litany of things Bethenny had said about her: that she “cared too much about hair and clothes,” that she was “unavailable,” “high maintenance,” “clingy,” and “unselfware.”

Bethenny attempted to out talk  Carole the entire time, but Carole was on a roll, and wouldn’t be stopped.  Bethenny had a pink folder at the ready, which she claimed contained the screenshots of their texts, but she never did take them out.  Carole continued, saying that Bethenny was attempting to bully her by over talking her.

But Bethenny said her list of grievances was “weak,” and maintained that nothing she’d read in those texts was all that bad, but Carole said she hadn’t gotten to the worst of it yet.  She said the most “vicious” thing Bethenny had said was that Carole “wanted to be 45,” which Carole said was “age shaming,” and not at all “empowering” of women.  Yes, we were back to that again!

Carole also said that Bethenny had shamed her when she said that she “didn’t have a career or children,” and pointed out that she had the “exact same” career as Bethenny, and that her husband had died, and if he hadn’t, they would have a child.  Bethenny said that Carole really didn’t have a career, at least not from  “this decade,” and the two continued to bicker about it, until Andy read a litany of things Carole had said about Bethenny, including  that she was “myopic,” “narcissistic,” and “could teach a master class in gas lighting.” 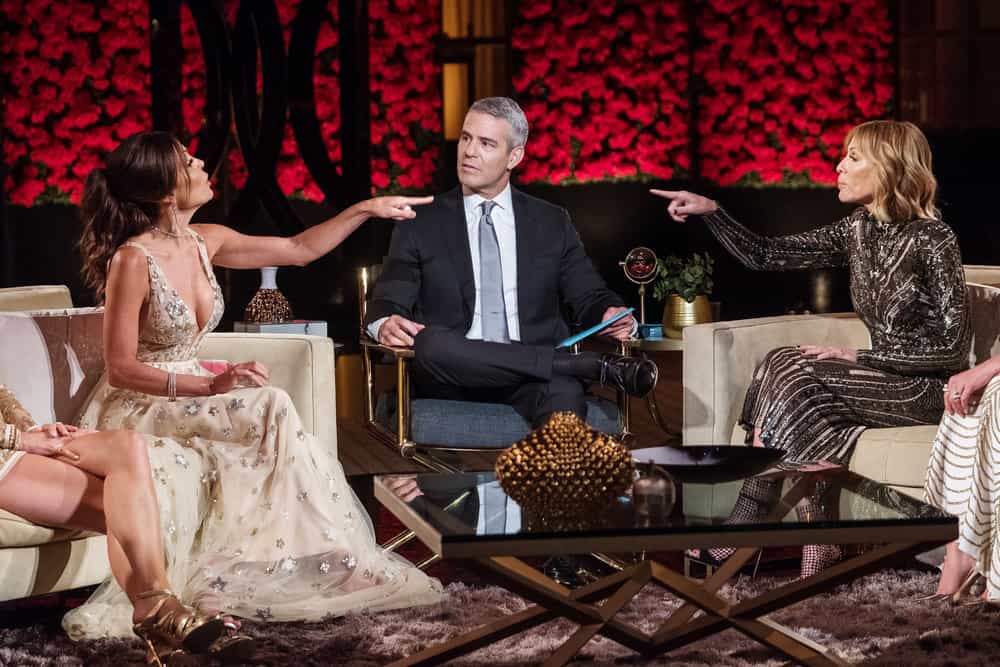 But Carole said she had only said those things in an effort to hold Bethenny accountable for the way she’d bashed her throughout the season.  But once again, Andy pointed out that they’d bashed each other.  At this point, Carole had had it, and told Andy that he was “full of s**t!” Needless to say, it didn’t go over well, and if you ask me, this was the beginning of the end of the RHONY road for Carole.  Andy’s still the boss, and the look he shot her was downright lethal!

Through two reunion episodes, I think Sonja and Tinsley have said a combined total of 20 words.  Sonja has piped up a few times to defend Bethenny against various attacks on her character, but otherwise has remained mostly mum.  Granted, she didn’t have a whole lot going on this season, but sheesh, give a sister a shout out!

Tinsley, at least got to gush about Scott a little, but it was the same old thing..she wants to be with him, but he’s emotionally unavailable, and for some reason enjoys toying with her emotions by breaking up with her, dating other people, and then showing up with flowers, and getting her hopes up all over again, rinse and repeat.

The show faded to black with a dedication to Dennis, who sadly passed away. But this is far from over. The  reunion comes to a dramatic conclusion next week. Stay tuned!

TELL US – THOUGHTS ON THE RHONY REUNION PART II?