The Real Housewives of Atlanta Reunion Part 3 Recap: Nene’s Accused of Choking a Producer and Cynthia Is Over Nene’s Friendship 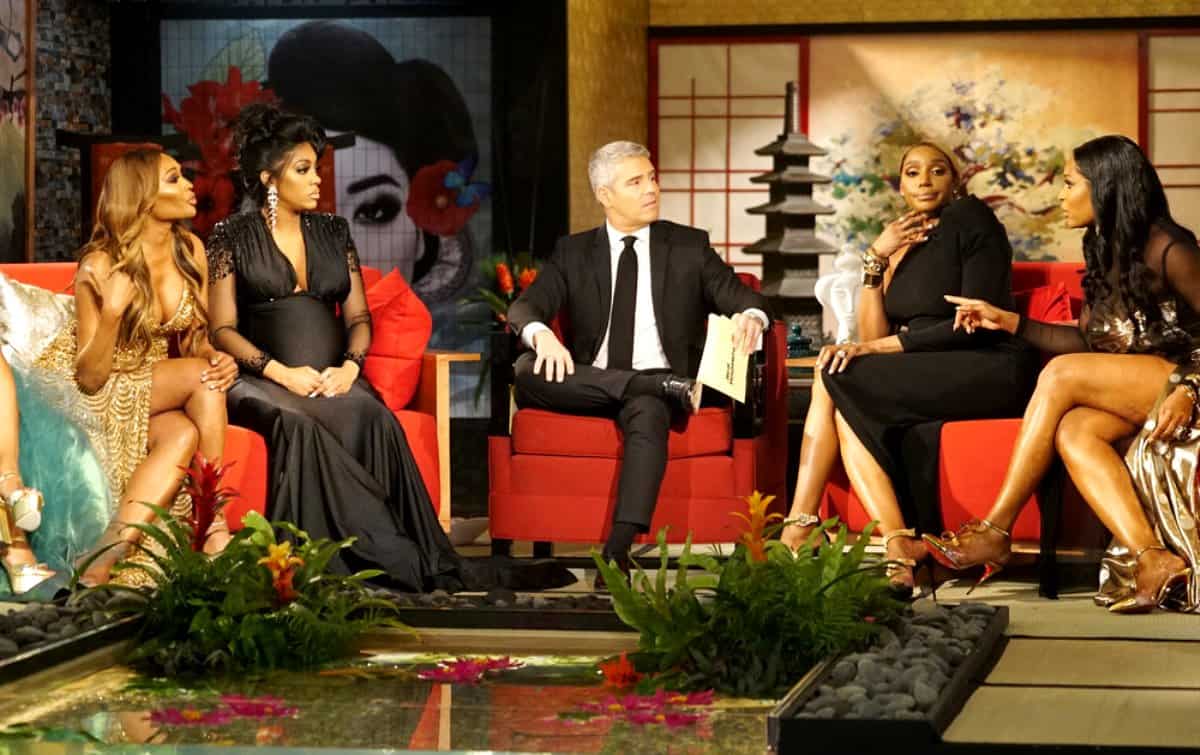 Well, viewers, season 11 of The Real Housewives of Atlanta finally came to an end last night with the final installment of the reunion, as the ladies discussed the more dramatic moments of the season. Here’s what they had to say:

For starters, they discussed what was probably the most explosive (and most ridiculous) moment of the entire season--NeNe’s complete and total meltdown at her “Bye Wig” party.  As viewers will recall, she was in a bad way the entire evening, but went full board psychopath when Kandi and Porsha went into her closet.  NeNe actually became violent, and attempted to physically force them out of the closet because she said it was too messy for company.

Granted, if you’re a visitor in someone’s home–friend, or not–and your host tells you that a certain area of their home is off limits, you should respect that, and stay out.  But both Kandi and Porsha said they thought NeNe was just playing around, and besides, she was always bragging about her closet, and telling them they needed to see it, so when the opportunity to see it in person presented itself, they went on in.  NeNe’s reaction, however, was way over the top.  But “over the top” may be an extreme understatement. She ripped one cameraman’s shirt off in an effort to stop him from filming inside her closet (it must have been really messy in there!) and according to the ladies, one producer wound up in the hospital after being scratched, bruised, “choked up,” and having his tooth knocked out!

The crazy part is that recalling the scene didn’t seem to faze NeNe in the least.  She repeatedly rolled her eyes, sucked her teeth, and made light of the situation.  She also justified the entire thing by saying that they witnessed her having a “breakdown,” and went on to say that she wasn’t going to be “badgered” about it, and didn’t feel the need to keep rehashing it.

Porsha tried to explain that the fact that NeNe was having a “breakdown” didn’t excuse her putting her hands on people.  She added that the whole incident was “scary,” especially because she was pregnant at the time, and that anyone who said it wasn’t was lying.  Apparently, Porsha got pushed so hard during the melee that she fell forward, and had her belt ripped off.  NeNe denied shoving her, and claimed that she was actually nowhere near Porsha the whole time she was in the closet.  So that closet was not only messy, but is also big enough to accommodate at least 5 people without NeNe being close enough to Porsha to push her from behind?! Seems unlikely, but NeNe said she was done discussing it, and that meant it was time to move on.

Andy then expertly steered the conversation toward  Cynthia, and her new relationship.  Cynthia reported that she was happy with her boo, sportscaster, Mike Hill, and said she would marry him if he asked, despite swearing she’d never walk down the aisle again.

The other women also seemed to think Mike was the one–even NeNe, who said she really liked him.  In fact, things are so good that even Leon, Cynthia’s ex, and father of her daughter, Noel, approves. Cynthia said the two men actually met before she met Mike, and were already on good terms.  She said that Mike understands that she’s a package deal, who comes with not only a daughter, but an ex who needs to approve of anyone who’s going to be anywhere near his daughter.

Eva also reported being happy with her own Mike, whom we all watched her marry in a lavish ceremony that cost upwards of $240,000.  She said the price tag was more than worth it because the big day was “fabulous,”  and she enjoyed every minute of it.  But what about her financial situation? Well, Eva said she made more than enough money leading up to the wedding to leave her debt free.  Those must have been some gigs, right? When asked exactly what they entailed, Eva said she makes up to $40,000 for social media posts, and was quite comfortable, thank you.  Hmmm–social media posts.  Who knew?

Apparently, her bridesmaids had no idea she had such a lucrative side hustle.  Otherwise, they probably wouldn’t have gone to Marlo talking about how broke Eva was.  Eva refused to say which bridesmaids spoke out of school, but Eva said she knew exactly who the culprit was–her maid of honor and former bestie, Shanita.  The other women backed up Marlo’s claim that it was more than one person, but Eva wasn’t really that concerned with them.  More than anything, she’s concerned with her security, which she said the other women breached when they went looking for her driver’s license info, and leaked it to the world, forcing her to move before she was necessarily ready.

You see, Eva’s ex, and sperm “donor” of her daughter, was abusive during their relationship, and she claims that she constantly has to move to keep them both safe.  According to Eva, he’s managed to find her, and show up, at every place she’s lived in since their breakup.  Marlo and the others didn’t seem to buy this story, mainly because of those five figure social media posts Eva had bragged about.  Surely, anyone who was afraid of being found would refrain from constantly posting their comings and goings, right? One would think so.  All the same, Eva maintained that she was telling the truth, and even produced tears of fear and frustration to back her claims.

Eva also expressed frustration with NeNe, who promised not to be mic’ed while discussing the situation with Eva outside of Kandi’s restaurant opening.  Eva had no idea their entire conversation had been recorded until she watched the episode, and rightfully felt betrayed.  Nene said she was ‘sorry she felt that way,’ but it was laced with sarcasm, and besides everyone knows saying you’re sorry to someone a certain way is actually worse than no apology at all.

But speaking of betrayal, when the shoe is on the other foot, NeNe just can’t handle it.  This brings us to Cynthia inviting former cast mate, Kenya to the launch party for her signature drink.  Cynthia claimed that she had no idea Kenya would actually show up, but NeNe wasn’t buying it, and felt that Cynthia never should have invited her in the first place after she’d dogged NeNe out in the press.  Of course, Kenya didn’t actually say anything all that bad.  A fan asked her who she’d text, call, or delete, and she said she’d delete NeNe. That’s it.  No big deal, right? But one just doesn’t cross NeNe, and move on with their lives.  They have to hear about it for months, years even, until NeNe moves on to someone else.

Everyone’s seen her do it–especially Cynthia, who’s been one of NeNe best friends and biggest supporters for the last nine seasons.  She said last night that NeNe was known for ‘throwing people away’ the minute she got angry, and she certainly wasn’t wrong about that.  Furthermore, she said that if NeNe wanted to fall out with her over some “petty a** s***,” then so be it.  NeNe said she was “good,” but Andy pointed out that she didn’t sound “good,”  and that, in fact, she seemed to be telling Cynthia no to let the door hit her on the way out, and Cynthia said she couldn’t get out fast enough.

Cynthia said she was tired of being the bigger person, and that she really couldn’t believe that NeNe wouldn’t give her the benefit of the doubt.  In NeNe’s defense, the evidence wasn’t exactly on Cynthia’s side.  In recorded conversations with both Kandi and her boyfriend, Mike, Cynthia could be heard saying that she was going to “act like” she didn’t know Kenya was coming, seemed to ask them to help her keep up the charade.  But Kandi had her back.  She insisted that Cynthia really didn’t know Kenya would be there. She added that, in fact, she had been the one to convince Kenya to attend, and that Kenya had asked her to keep it a surprise.

NeNe still wasn’t buying it, but Cynthia brought up a good point.  What on earth would she get from going against NeNe, and starting a fight with her The answer: nothing.  No one wants to go round and round with NeNe.  It’s exhausting, and Cynthia of all people generally tends to avoid drama and pot stirring.  But Andy had a better question: what does Cynthia get out of being friends with NeNe in the first place? Her answer to that came without hesitation: “nothing.” NeNe agreed.

In the end, Cynthia said that she ‘owned’ how the situation looked, but said that NeNe had said a lot of nasty things about her since then.  She said that she’s at a point in her life where she isn’t going to stress herself out about anything that was no longer bringing her peace.  NeNe had absolutely no response to this, but the others hoped that with time, the two former friends would find their way back to each other.

In better news, Porsha and Kandi both said they felt that they were finally in a good place with one another, and Porsha vowed to be at more of Kandi’s events once she “drops” baby P.J.

They ended the evening with a prayer for P.J.’s safe arrival, and the realization that they all loved each other, which was led by Porsha.

Well, viewers, that’s a wrap on another season of RHOA. Hurry back, peaches!

TELL US – THOUGHTS ON THE REUNION AND THIS SEASON OF RHOA? IS IT PETTY FOR NENE TO FALL OUT WITH CYNTHIA OVER KENYA’S INVITE TO HER PARTY?