The Real Housewives of Potomac Recap: Ashley Gets Upset With Robyn for Revealing What She Heard Michael Say 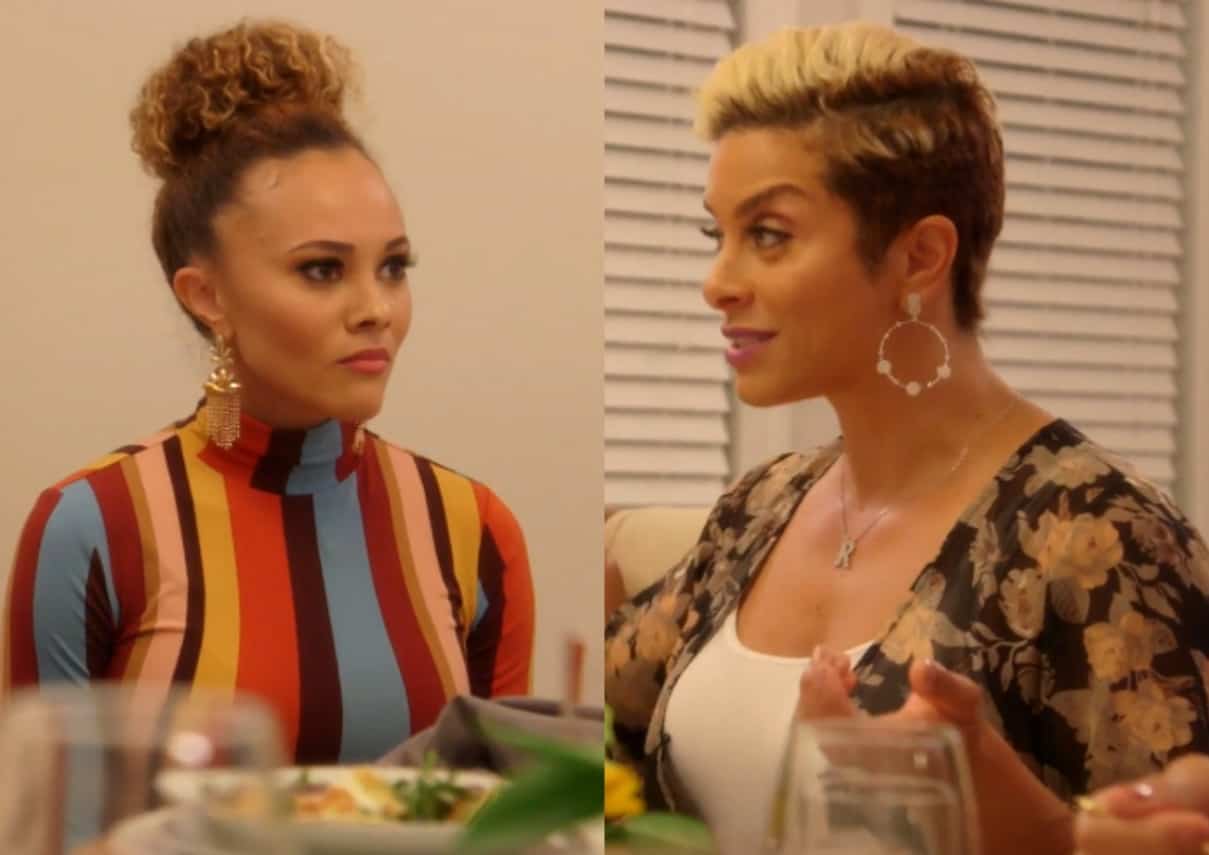 The ladies of The Real Housewives of Potomac returned last night, and they really brought the drama! It was a mess from the very beginning, and there’s quite a lot to discuss, so let’s jump right in, shall we?

When we picked up with the ladies, they were all still at Candiace’s disastrous dinner party.  Why was it disastrous, you ask? Well, Ashley confronted Candiace (again) over her comments about Ashley’s recent drinking, and how that must mean that her efforts to conceive following her miscarriage were less than sincere.

When Candiace repeated her sentiments about how drinking can make it more difficult to conceive (even quoting the surgeon general), Ashley told her that she had no idea what she was talking about.  Ashley pointed out that Candiace didn’t even live in her own home, since the house that she lives in with her husband Chris is technically being paid for, at least in part, by her mother, Dorothy.  Well, that did it! Candiace went OFF!

Screaming and name-calling ensued, and Candiace finally grabbed a knife and waved it in Ashley’s face.  Now, in Candiace’s defense, it was a butter knife, not a machete, but still, who does that?! Finally, Chris, who was busy cooking the meal, came out and grabbed his wife.  He dragged her away from the situation before things could get any worse.  As he carried her away, Candiace threw the knife toward Ashley, screaming profanities and threats as she went.

As Chris took Candiace into the pantry and tried to calm her down, Gizelle decided that it was the perfect time to bring up another issue, you know, because tensions weren’t high enough.  She is SO messy!  Anyway, as Ashley stood there fuming and panting, Gizelle told her that Candiace had something else to bring up—something that involved her husband, Michael.  Gizelle said she didn’t know all the details (she did), but Robyn did, and she could fill Ashley in on the subject in Candiace’s absence.  Good grief! Robyn was stunned that Gizelle would volunteer her to bring up something so sensitive, and NOW?! But with the spotlight on her, Robyn had no choice but to just come out with it, and so out with it she came.

Robyn explained that on the night of Ashley’s uncle’s birthday party, Ashley and Michael had walked passed her, Candiace, and several other guests.  They all overheard Michael say, ‘I’d suck his d**k.’  Ashley was stunned, and she said that her husband hadn’t said any such thing.  She asked if Robyn had dreamed the whole ordeal.  Robyn assured her that it had happened, and that she hadn’t been the only one who’d heard it.  Ashley asked if she was there when he’d said it, and Robyn said that she had been.  Ashley said she thought she’d remember that.  Then she asked who her husband had been speaking about when he made the comment.  Robyn told her it was one of the husbands in the group.

Ashley continued to deny it as Candiace came back into the room.  Candiace chimed in to say that it was all true, and that she’d heard it too, and that Ashley was lying.  She said it wasn’t the first time Michael had done or said something suspicious regarding a man.

Ashley reminded Candiace how drunk and messy she’d been that night.  She also managed to slip in the fact that Candiace had told Gizelle about Monique’s “Amistad” comment about Katie, rather than speaking directly to Monique or Katie about it.  Either way she posited Candiace was a troublemaker and a pot stirrer and couldn’t be trusted.  She finished off by making another comment about Candiace living in her mother’s house, at which point Candiace told her to leave.  Ashley said she’d be happy to leave and walked out to the front yard. She was closely followed by Gizelle and Katie, who convinced her to come back in!

It was a bold move.  Who walks back into a house they’ve just been thrown out of?!  But Ashley said she wanted to set the record straight, and that if they were going to be discussing her husband, she was going to be there to defend him.  They continued to go back and forth, with Ashley saying that Michael had not and would not say what he was being accused of saying.  Robyn and Candiace continued to insist that he had, indeed, said it.  To make matters worse, Chris chimed in from the kitchen to say that he had also heard the comment.  The women seemed to feel that Chris’ word meant even more than Candiace and Robyn’s.  Gizelle, Karen, and Monique advised Ashley to discuss all of it with Michael ASAP.

Ashley said that she would, and Candiace said that was great, and that now that she had said her piece, she could get out.  Again, Ashley said she was happy to oblige and left.  The ladies were unfazed by all the drama and continued talking and eating, except for Katie.  After hearing what Monique had said about her, Katie wanted to set some things straight herself.  She asked Monique to come into the other room so they could talk.  They were standing in the entryway discussing the “Amistad” comment when Ashley came back AGAIN!  This time she wasn’t even escorted in by other guests—she just walked right back in the front door!

Ashley stood listening to Monique and Katie’s exchange.  Then, she chimed in to ask Katie if she had talked to Candiace about it.  After all, Candiace had been the one who started all the drama by telling everyone else about Monique’s comment instead of just coming to Monique.  They were just around the corner from the dining room, so Candiace heard Ashley’s voice right away.  Candiace came storming out to tell Ashley to leave—AGAIN!  And again, Ashley said she’d be glad to because she had better places to go.  I’m not so sure she did.

Finally, though, Ashley did leave, and Katie went with her.  They talked about the whole situation with Michael, and Katie asked if Ashley thought he might be gay.  Ashley said he definitely wasn’t, and she said she was positive that he’d never made that comment.  She was also starting to get angry at Robyn, who she said wasn’t a true friend.

Ashley said if Robyn was truly concerned for Ashley and her marriage, she would have come to her privately as soon as it happened, rather than bringing it up at a dinner party.  But in Robyn’s defense, she hadn’t brought it up—her messy friend Gizelle had.  And Robyn also wasn’t convinced that she’d actually heard what she thought she’d heard until Candiace brought it up when she first arrived at her house.  Until then, she too thought she’d been too drunk, or that she’d misheard him, or dreamed up the comment out of whole cloth.  And yet, here she was, being dragged into the whole ordeal!

The following day, when speaking to producers, Ashley said that Michael had been livid.  He couldn’t understand why she was still friends with such horrible women.  She repeated the sentiment when Gizelle dropped by to check on her.  She was fuming by that point, and all of her ire was directed at Robyn, who she felt brought the subject up at the wrong time and in the wrong place.

Gizelle explained that Robyn hadn’t meant any harm.  Robyn only wanted to help Ashley because if Michael was gay that was fine, but if he was talking about anyone else in a sexual way while married to Ashley, it was an “egregious” offense, and Ashley needed to be aware of it.  Gizelle stopped short, however, of taking responsibility for being the one to bring the issue to a head during the dinner party.  She said she would talk to Robyn about it, and that the two of them should really hash it out so that Ashley could understand where Robyn had been coming from.

Speaking of hashing things out, a little later, Candiace went to a much-needed therapy session with her mother.  The two have been on the outs in a big way lately, especially after Dorothy smacked her daughter upside the head with her purse at a wedding.  The therapy session wasn’t too productive, though, as Dorothy barely let her daughter get a word in edgewise, despite the therapist’s admonitions.  Dorothy also diminished her daughter’s hurt feelings and tears.  Monique suggested that, perhaps, Candiace’s lashing out at Ashley at the mere mention of her mother might be misplaced aggression, and that it should be aimed at Dorothy.  I would say she was definitely right about that. Dorothy is a piece of work!

Ashley and Robyn finally got their come-to-Jesus moment when Robyn and Gizelle attended Ashley’s performance at the local gay pride parade.  Ashley expressed her feelings and was clearly emotional, but Robyn had no idea why she was directing her hurt feelings toward her.  Then, Ashley explained it had simply been the wrong time and place.  She then added that Robyn had “co-signed” on something that was absolutely false.  Robyn said that she had been telling the truth.  She explained that her hands had been tied (by Gizelle, who put her on the spot!).  Robyn felt Ashley had the right to know what her husband was saying about other men.

She also reminded Ashley that when it came to other people’s personal lives, it was open season as far as she was concerned.  Robyn said it seemed hypocritical that Ashley now wanted privacy, particularly when her husband’s behavior had been so public.  Ashley, of course, didn’t want to hear that and walked away in a huff, leaving Robyn and Gizelle staring after her in wonder.

Well, this is far from over, viewers.  The fallout continues when RHOP returns next week.  Stay tuned—this is going to be good!

TELL US – DO YOU BELIEVE MICHAEL MADE THAT COMMENT? DO YOU THINK ASHLEY HEARD IT TOO?