The Real Housewives of Potomac Recap: Ashley Slams Candiace For Saying She’s Not Really Trying to Get Pregnant 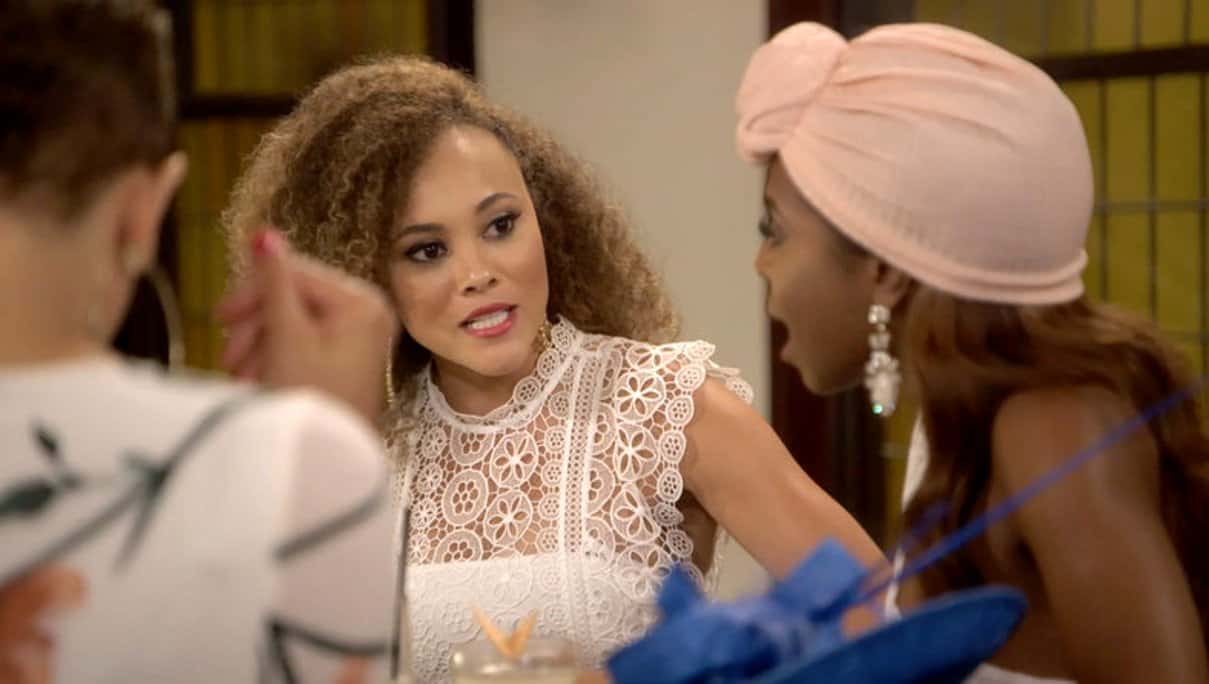 I’ve been pretty vocal about the fact that housewives trips annoy me.  They feel a little too contrived and everyone usually just ends up getting drunk and messy.  But this current girls’ trip to The Big Easy for The Real Housewives of Potomac is hands down the most ridiculous.

Why, you ask? The ladies of RHONY and RHOC have certainly gotten drunker and the RHOA peaches rarely make it back unscathed, and don’t even get me started on the antics during RHONJ trips–I mean they threaten each other with broken wine glasses. And the RHOP crew hasn’t done any of that.  They certainly argue quite a bit, but it’s not so much the fact that they argue that makes it ridiculous–it’s what they argue about that I don’t get.

When we picked up with the ladies last night, Karen was in the middle of storming off, after Gizelle called her out in front of everyone for telling a perfect stranger all the details of her business plan, after being less than forthcoming when Gizelle had asked the same questions.  Now, this is a ridiculous argument for several reasons.  First of all, Karen and Gizelle literally just started speaking to each other again, after Gizelle apologized for all the nonsense she put Karen through last year just trying to be in her business all the time.  Gizelle questioned her about her marriage to Ray, his supposed feelings for a colleague of hers, and of course, his tax troubles.  She even sent a phony pizza delivery to her house in an effort to try to prove that Karen didn’t live where she said she did.  A producer actually had to remind Gizelle of all of these instances when she asked, during her confessional, just what she’d ever done to Karen.

After all of that, Karen is just now getting to a point where she’s trying to trust Gizelle’s motivation for asking any questions about her life.  This brings me to the second reason this is a ridiculous argument.  Both directly (Karen’s and Gizelle’s businesses do have some chance of overlapping) and indirectly, (they’re two petty women from the same show in the same town) Karen and Gizelle are in competition with one another, and it makes sense that Karen wouldn’t want to tell Gizelle everything.

Thirdly, the “stranger” that Karen talked to about her business was the woman who put Gizelle’s cosmetic line on the map, and got her a lucrative deal with Target.  That’s someone you want to get to know if you want to get a fragrance line off the ground, don’t you think?

Finally, and most importantly, why does Gizelle care so much about these details in her friend’s life that have absolutely no effect on her?  Is she incapable of understanding that Karen has the right to share things in her own time, or even keep them to herself, altogether?  The answer is yes, she is completely incapable of understanding these things.  And Karen had clearly had it, so she got up and walked away.  She didn’t even seem all that angry, and said she was fine when Candiace followed her out to check on her.  She was simply tired of Gizelle’s questions and demands for full access to her personal business, but in the interest of keeping the peace, she went back to the table to join the ladies for dessert.

Gizelle apologized for coming at Karen, and said that she just wanted Karen to trust her.  Karen said that she would tell Gizelle things in her own time, and thanked her for introducing her to her colleague, and at Katie’s prompting, acknowledged how much she respected Gizelle’s business choices and admired her success.

Whew! It was a lot for the first few hours of the trip, but the ladies were starting to pull it together.  But none of it had been about Candiace, and that’s just not acceptable, so steered the conversation to her own life, by asking Gizelle for the name of the therapist she’d been working with who was having such a positive impact on her attitude.  What?! Anyway, saying something like that encourages questions, like, ‘hey girl, are you alright?’ especially from this group who constantly keep their noses in each other’s business.

The question came from Robyn, and Candiace was happy to oblige.  She talked about what seems to be a pretty toxic relationship between herself, and her mother, Dorothy.  Dorothy is demanding, controlling, often even cruel.  She’s also a therapist, who Candiace explained, knew all the buttons to push to get a rise out of her daughter.  Guilt trips, name calling, threats–you name it, Dorothy uses it, and it’s led to such a deep rift between the two that Candiace said she wasn’t even sure she wanted to have children.  The ladies were saddened to hear this, but they’ve all seen Dorothy’s handiwork.

Surprisingly enough, back in Gizelle’s room after dinner, Candiace had plenty of insight to share on friendship, boundaries, and understanding.  Such things are usually way over her head.  But she told Gizelle that maybe it was okay to give Karen a bit of a break.  She’d just recently lost both of her parents, and was likely feeling even more vulnerable than usual.  She astutely pointed this out to Gizelle without a hint of blame or judgement in her voice, and actually had the good sense to throw in a little dig at Karen’s flair for the melodramatic, so Gizelle would think she wasn’t really siding with Karen.  Nice touch.

But then Candiace just sort of went off the rails…in fact, she went full-on Gizelle. Katie asked if she and Gizelle thought that Ashley might be “knocked up,”  and Candiace said that not only did she not think Ashley was currently with child, she doubted the veracity of her efforts.  According to Candiace, a woman who was actively trying to get pregnant would never drink as much as Ashley had been lately.

Now, keep in mind that ‘lately’ and ‘a lot’ basically amounted to Ashley getting pretty tipsy on two separate nights over the course of the last few weeks, and while Ashley, herself, said that she was going to cut down on alcohol and other less than healthy habits in an effort to make her body as hospitable an environment for growing a tiny human as possible, the bottom line is that it’s her business.  Why does Candiace care about Ashley’s alcohol consumption; or her “cold uterus,” (whatever the hell that is); or how hard she’d really trying to conceive?! But that’s RHOP for you.

The following day, Gizelle arranged for the ladies to meet her father at the plantation museum he ran on the very property on which their ancestors had been enslaved.  He showed them artifacts and pictures that showed the anguish of what their ancestors had gone through.  He showed them pictures of Gizelle’s great, great grandparents, children who had died in slavery, and the very harness that was used as punishment when slaves attempted to run for freedom.

It was haunting and disturbing and painful.  But even on such a somber occasion, Gizelle’s father couldn’t help but toss a little shade at his daughter’s nemesis.  In the midst of explaining that slaves were often used as human “collateral” when their owners wanted to borrow money for land, he called Karen out as having a pretty deep understanding of the fact that collateral was always necessary when one wanted to borrow money.  Let’s just say Gizelle comes by her messiness honestly.

Karen let the comment slide off her back, but on the way back to the hotel, she announced that she wouldn’t be joining the other ladies for their planned night on the town that evening.  She explained that it had been a heavy day already, and with the following day marking two months since she lost her father, she just wasn’t feeling up to it, and didn’t want to rain on the other ladies’ parade.  They seemed to understand this.  Seemed to understand it.

After the ladies primped and got into their costumes for the night, they met in the lobby.  Katie pointed out that Karen was on Instagram Live, talking to fans in South Africa.  Gizelle immediately messaged her, saying that they were waiting for her in the lobby,  She said she wasn’t coming, and then ignored Gizelle’s subsequent messages.  Fans pointed out the snub, and wanted to know the reason behind it–as did Gizelle.  She didn’t know why Karen was staying in, and felt that she had been lied to because Karen ‘wasn’t acting like she was in mourning.’

But one clown doesn’t stop the circus, and the ladies went on without her.  Drinks were flowing freely, the ladies were dancing and laughing together, and as I’m sure you can imagine, things didn’t end well.

The ladies retired to Gizelle’s presidential suite at the end of the night, and Gizelle demonstrated exactly why Karen had been smart not to tell her anything.  She announced to the entire room that Candiace doubted Ashley’s desire to get pregnant.  Candiace was shocked, and tried to act like she had no idea what Gizelle was talking about, saying “who thinks that?” But she was busted. Ashley, of course, wanted to know where Candiace was getting that from, and Candiace said Ashley’s heavy drinking made it seem like she wasn’t sincere in her attempts.

The ladies tried to explain that this was not how pregnancy worked, and that drinking was not tied to fertility difficulties in most cases.  Ashley wondered where Candiace was getting her information from.  After all, she doesn’t have an MD after her name, but Candiace said that she was an “honorary” doctor because there are so many in her family.  Ashley told her that’s not how it works, and the other ladies watched on helplessly, as the two argued back and forth. Candiace said she was dying to bring up the dirt she had on Michael, but she refrained–for now.

The trip comes to a close next week, but before it’s over, we’re going to see a Gizelle/Grande Dame showdown we won’t soon forget.  Stay tuned!