The Real Housewives of Potomac Recap: Gizelle Calls Out Karen For Keeping Things ‘Private’ From Her

by Tiffany Brown May 27, 2019 22 comments
ShareTweetWhatsappPinterestRedditTumblrMailFlipboard 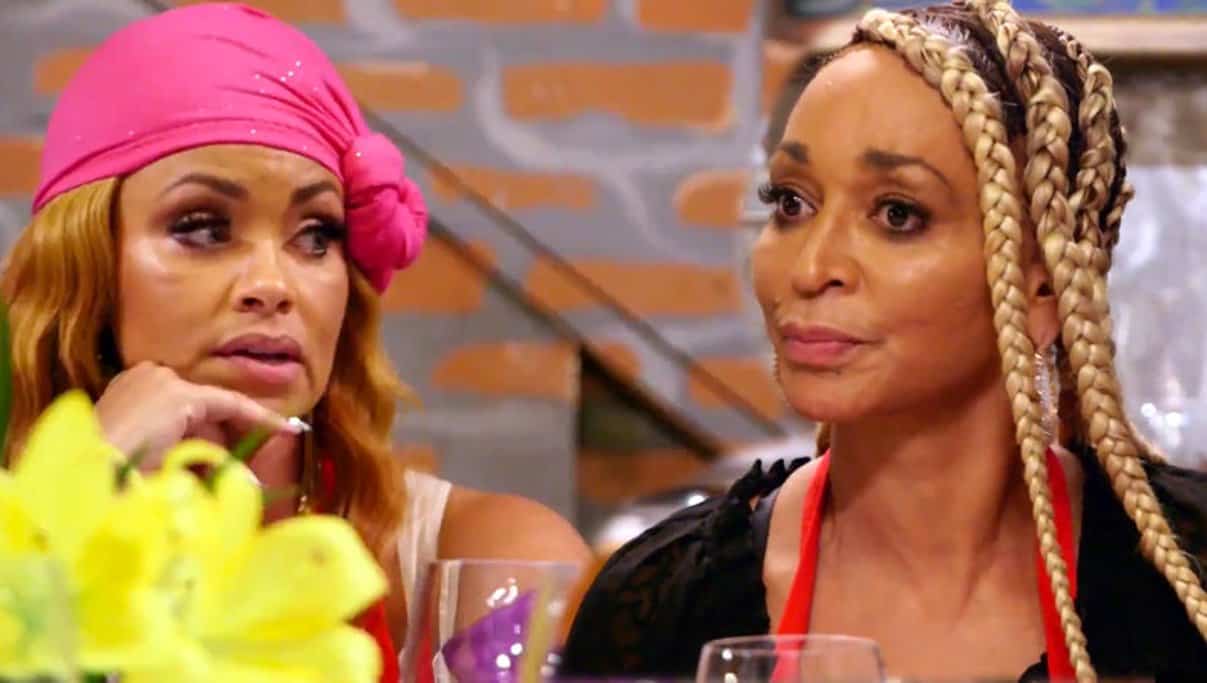 Last night, the Real Housewives of Potomac embarked on their first girls’ trip for the season, and I think we all know how these journeys end..tears, yelling, too much drinking, and at least one of the ladies threatening to go home early…it’s a classic housewives recipe that all the franchises use to spice up an otherwise mundane season, which is fine, but let’s just call it that.  Instead, they always feel the need to invent some reason for all the women to go away together.  This time it was to be an opportunity for Gizelle to reconnect with her culture. Yes, you read that correctly.

As Gizelle explained to her daughters during a particularly hilarious exchange prior to the trip, this was to be a spiritual journey.  Gizelle was “journaling” (making a list of those who have wronged her and how to make them regret it)  and her daughters wandered in, and she explained that she was in therapy, and was making efforts to “get ahold of her emotions.” The three girls, all in their early to mid teens (prime eye rolling time) barely suppressed their laughter, and gave each other knowing glances that seemed to say, ‘this again?’

Gizelle went on to say that part of her self exploration in therapy would, and should, include reconnecting with her extended family and going back to a place that held warm memories of childhood summers spent with dozens of doting aunts, uncles, and cousins–New Orleans.  She also mentioned that she wanted to take her daughters there to meet her family and was eager for them to experience a slice of life in the Big Easy. Sounds like a solid idea, right? Being around family has a way of putting things into perspective and take you back to a simpler time, and surely her daughters would love to meet their kin. But first, Gizelle said, she needed to go back herself  (oh, okay) and take the girls along with her (what?!).

How exactly Gizelle thought bringing five of the messiest women on the planet, plus Katie, who has mysteriously reemerged after being MIA for the last two seasons, and is also messy, would help her in this journey of cathartic rediscovery is beyond me. But I have a theory: Gizelle’s messy too.

You see, almost all of the women were dragging a ton of emotional baggage when took off for the trip–whether it was something going on in their private lives, or some issue they have with other women in the group.  But, in classic RHOP style, none of them were interested in being open and honest, they simply wanted to plaster on phony smiles, give each other double cheek kisses, and fake it till they make it. Well, I’ve watched enough housewives trips to tell you that that never works.

There was drama between Gizelle and Karen, who was pleasantly surprised to be invited at all after everything they’d been through last season, before they even left.  The two ladies had finally reconciled when Gizelle formally apologized to The Grande Dame last week, and in an effort to show Gizelle she could let bygone be bygones, Karen showed up for the Ubiquitous Business Expo, where Gizelle would be showcasing her Ever Hue Cosmetics line.

Many viewers may remember that last year, Karen had gone to the expo, but had pointedly ignored Gizelle and stayed away from the Every Hue table the entire day. It was almost as if she had gone to the event for the sole purpose of making sure Gizelle know she wasn’t speaking to her.  But that’s something a middle schooler would do, right? It’s certainly not something Karen would stoop to.  But this was a new season and a new beginning to their friendship.

Ehh..maybe not. Gizelle wasn’t happy with the way Karen handled herself at this year’s expo, either. Gizelle introduced her to the woman who had helped put Every Hue on the map by brokering the deal between Gizelle’s company and the truly ubiquitous retail giant, Target, and mentioned that Karen had a fragrance line that would be available soon.

Karen immediately became all business, and jumped at the opportunity to tell the woman all about her upcoming products. Gizelle stood by listening, as the woman asked Karen questions about price points and packaging, and Karen answered her questions in great detail.  The problem? Gizelle had asked similar questions, herself, and Karen had never been so open with her.

But here’s the thing.  First of all, she asked those questions last season, at a time when Karen’s fragrance business was in its infancy.  Secondly, she asked in a way that made it clear that she wasn’t actually interested in what was going on in Karen’s business, and just wanted to make her look foolish, or like a complete fraud when she didn’t have the answers. Lastly, even in the best of circumstances, Karen and Gizelle are friends, not business partners, and Karen likely didn’t feel the need to discuss such details with her.  All the same, Gizelle was “feeling some type of way” about it. What was that Gizelle had said earlier about “getting ahold of” her feelings and emotions?

Gizelle stared daggers at Karen, as the ladies boarded the shuttle to the airport, and it was clear that she was chomping at the bit to bring it up. But she held her tongue. You see, this is Gizelle’s trip, and she was relishing her role as hostess–lol, hostess! I mean boss—and telling the other ladies that there would be “no whining” on this trip, and that everyone had better mind their ps and qs while visiting NOLA.

This wasn’t going to be an easy feat, you see Candiace and Robyn were sitting on a piece of information that was bound to set Potomac ablaze with gossip.  Candiace especially looked as though she might burst, but Robyn had advised her to forget all about it, and not make drama where there was none (is there some other reason she’s on the show??).  You see, Ashley had thrown a party for her Uncle Lumpy, and Candiace and Robyn had stuck around late into the night partying and getting drunk with Ashley and her hubby, Michael  It looked like a really good time was had by all, until Michael drunkenly announced that he wouldn’t mind um..servicing a certain man they all know (they never did say who).

This is huge! Michael is married to their friend, who is desperately trying to have a baby.  She deserves to have all the information, right?  This also is not the first time Michael’s sexuality has come into question, and perhaps it’s about time Ashley take a cold, hard look at the situation, right?  Yes, all of that is true.  But more to the point, Ashley is a little pot stirrer, who loves to call people out on any messiness they may have going on in their life, and there is nothing quite as sweet as comeuppance.

It was clearly all Candiace could do not to let it all out when Ashley made a snarky comment about the drama between Candiace and her mother.  That’s pure Ashley.  She has issues with her own mother–and, of course, major issues with Michael–but there she was calling out Candiace.  But Candiace laughed it off, and handled it in stride–for now.  This clearly will not last.  It’s a powder keg that is going to go off at the worst possible moment. I can all but guarantee it.

But last night was the first night of the trip, so they kept things a bit lighter, or at least they tried to.  Over dinner, Gizelle just couldn’t help herself, and she called Karen out about telling more about her business plans to a virtual stranger than to one of her best friends.  As the other ladies looked on in shock (they knew nothing about this) Karen said that it was because maybe she and Gizelle weren’t friends, after all.  And that it showed in the way Gizelle treated her.  She said she was “tired of the bull****,” and left the table.

Scenes from next week show her packing her bags, and the ladies wondering about her whereabouts.  See, I told you, someone always threatens to leave.  It’s just day one in The Big Easy, but this trip seems like it’s going to be anything but easy–stay tuned!