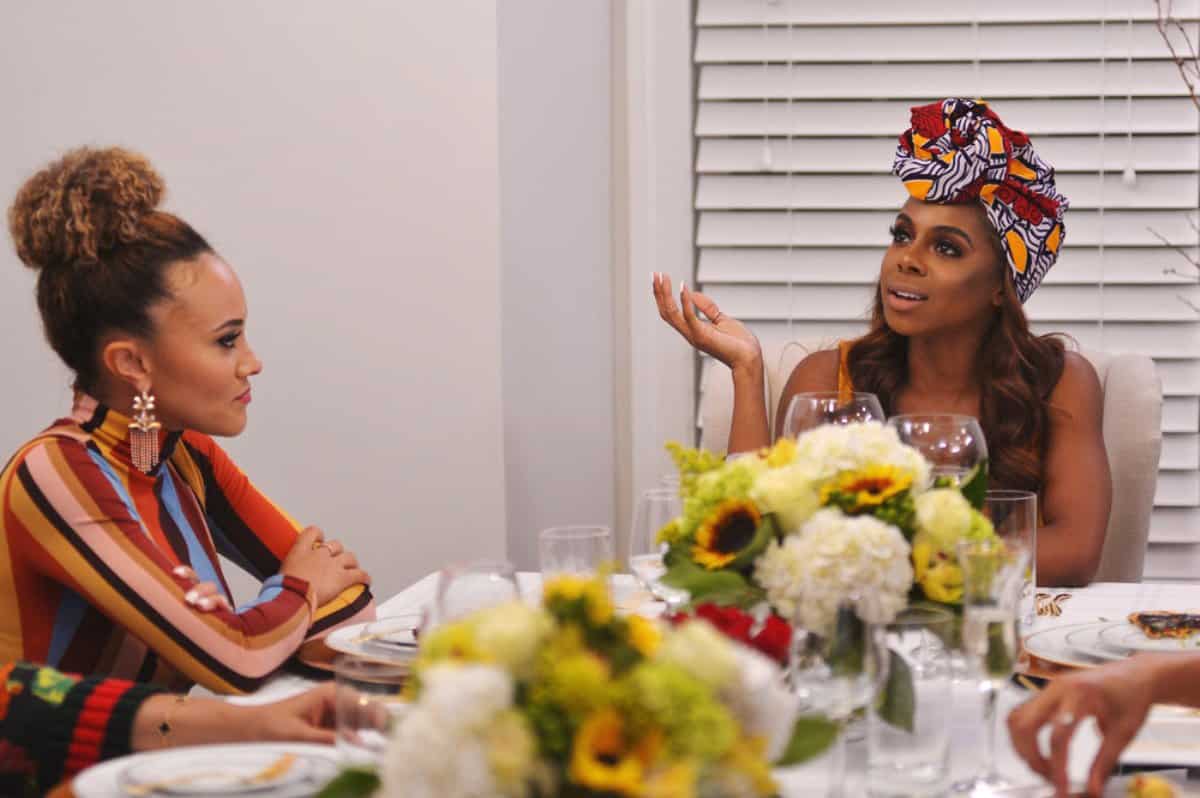 You know the housewives episode is going to be lit when they hit you with the prologue.  Last night’s episode of The Real Housewives of Potomac was no exception.  It started with a glimpse of what was clearly an interesting dinner—like, knife pulling interesting. Then, the episode rewound to a week earlier so we could see how it all got so damned dramatic.  There’s a lot to unpack, so let’s jump right in…

When we picked up with the RHOP crew, Candiace and her new husband, Chris, were getting settled into their new digs, and she was telling Chris that she’s already anxious to move into another home.  Chris said that he felt there was “no rush,” but Candiace insisted.  Candiace’s mother, Dorothy, purchased the home they currently live in, and their relationship has hit yet another major snag.

While the mother and daughter were attending a friend’s wedding, they began to have words.  Their argument ended with Candiace’s mother slapping her in the face with her purse.  The whole incident was humiliating for Candiace, and she was more than ready to get out from under her mother’s thumb.

Chris reminded Candiace that to get out from under her mother’s thumb, he needed to get his cookbook off the ground. To that end, the newlyweds were planning a dinner party for the ladies, who would test the recipes.  They planned on inviting “everyone-ish,” as Candiace was still feeling some type of way about Ashley and wasn’t all that gung ho to have her in her home.  But once again, Chris disagreed with Candiace’s way of thinking.  He reasoned that, as a restaurateur herself, Ashley would provide the most valuable feedback on his recipes.  Candiace had to agree with this logic, but as it turned out, Ashley wasn’t all that interested in coming anyway.

You see, when Ashley met up with Robyn and Gizelle for a walk, Gizelle told her that Candiace had had plenty to say about her testimony during Monique’s rainbow party. Namely, that what Ashley had to say was fake, and that her husband Michael’s tears during her speech were also less than genuine.  Ashley was shocked that Candiace would have said such a thing, but Robyn really wasn’t.  They’ve all had their doubts about the state of Ashley and Michael’s marriage—and with good reason, considering the rather explicit comments he’d made about another man’s umm…manhood, during the birthday party Ashley had thrown for her uncle a few weeks before.  It had been a lot to take in (no pun intended) and no one in the group had mentioned it to Ashley.  But Candiace has clearly been chomping at the bit (again…sorry) ever since.

Gizelle had some other scoop too.  She told both ladies that Candiace had told her that Monique had made a less than flattering comment about their friend, Katie.  Candiace had told her that, during their trip to New Orleans, Monique had compared Katie’s looks to “Amistad”—a movie about a slave ship, if you happen to be unfamiliar.  Gizelle was rightfully offended on her friend’s behalf.  Ashley was also offended, but she couldn’t quite bring herself to believe that Monique would have made such an offensive comment.

And we all know Ashley…she can’t keep her mouth shut for five minutes, especially if there’s tea to be spilled.  If that tea is piping hot and has the potential to burn her archenemy of the moment, forget about it!  She and Monique were finally in a good place again, and Monique invited her to her underwater pregnancy photo shoot (don’t ask). Ashley was happy to come and lend her support.  Mostly, though, she couldn’t wait to tell Monique that Candiace was talking trash about her.  Monique was clearly annoyed, but she had bigger fish to fry—namely floating around in her backyard pool in a wedding dress.  She vowed to deal with Candiace later.

Ashley showed a little more discretion later when she was talking with Michael.  The two were beginning to ready their home for their future offspring, beginning with getting rid of Michael’s beloved pool table.  Ashley asked how he’d been feeling since Monique’s rainbow party.  He said he felt that they hadn’t really taken the time to grieve after the miscarriage.  Still, the party had given him hope that they, too, might someday have the child they both longed for.

Ashley stopped short of telling Michael that Candiace thought his tears at the event were fake, but that didn’t stop Michael from throwing a little shade her way.  When Ashley mentioned that all the ladies would be going to Candiace’s house for a dinner party, he quipped, “don’t you mean her mother’s house?”  Be careful, Michael—those are mighty big stones to be throwing from a glass house!

Later, Monique and Candiace met for lunch.  Monique immediately told her that Ashley had told her what Gizelle had told her about her comments about Katie.  Now, if this seems like a seventh grade mean girl conversation, that’s because it was—but well, if the shoe fits, lace that baby up and wear it.  Monique said it sounded to her as if  Candiace had thrown her under the bus when she’d actually taken Monique’s comment completely out of context.  Monique explained that when she’d first met Katie, she’d come off as a snob with her nose in the air.  Now, though, she seemed free (hence the “Amistad” comment) and unbothered by the petty nonsense that used to rule her world.

Furthermore, Monique advised Candiace not to “pick her apart like her mother does to her.”  Candiace’s mother is a sore subject, to say the least.  The comment didn’t sit well with Candiace, especially delivered as it was by Monique—casually, and with a smile.  Candiace told Monique to leave her mother out of it, and she added that she was still angry with Monique for comparing her to Ashley a few weeks before.  As far as Candace is concerned, Ashley is “messy,” and she is far from it (lol…girl, please!).  Monique had an answer for that, too.  She reminded Candiace that the way she’d been talking trash about people lately was pretty messy, indeed.

When it was finally time for the dinner party, Robyn, who is usually the tardiest of all the ladies, surprised Candiace by being the first to arrive.  She was closely followed by Gizelle, and talk soon turned to Ashley.  Robyn wanted to know why Candiace seemed to have, for lack of a better phrase, “such a hard-on,” for Ashley and her personal life.  An excellent question if you ask me.

Candiace said she thought there was a lot going on with Ashley’s marriage.  Then the three women, and Chris, who took time off from his cooking duties long enough to engage in the gossip, discussed Michael’s comments the night of Ashley’s uncle’s party.  They all agreed that, at first, they were sure they must have misheard him.  Still, while everyone was pretty drunk,  they’d all woken up the following day pretty certain that he’d said exactly what they thought he’d said.  Besides, it wasn’t the first time Michael’s behavior toward a man had raised eyebrows since he’d been married to Ashley.

It wasn’t long before the rest of the guests arrived (including Ashley).  At first, everyone was being cordial and enjoying the feast Chris had prepared for them.  But when he innocently asked Monique if she’d prefer he leave the red wine reduction out of her portion of the poached pears, and she said that she would, all hell broke loose.  You see, it was the perfect segue way for Ashley to bring up Candiace’s comments about her recent drinking and how she felt that must mean that Ashley wasn’t really serious about getting pregnant.  Once the flood gates were open, Ashley went ahead and told Candiace that she was well aware of the comments she’d made to Gizelle about she and Michael faking their emotions during the rainbow party.

To Candiace’s credit, she didn’t try to deny it.  She said she felt that Michael had been putting on a show, to which Ashley responded, “for who? You?!”  Candiace said the show had been for the entire “congregation,”  and Ashley asked why she’d even been watching them in the first place.  Candiace said she couldn’t help but watch them because Ashley had made a spectacle of both of them by “taking the mic.'” She had a point there, and she went on to do a pretty dead-on impression of Ashley, using her butter knife as the microphone.

Ashley said Candiace had no idea what she had been through or what was happening in her body, and how dare she speak on any of it while they were all sitting in her mother’s house pretending it was hers.  That did it! Candiace told her not to talk about her mother in her home.  While Candiace talked, she wielded the butter knife like she was Jason in “Friday the 13th.”  Ashley wasn’t the least bit intimidated (after all, she’s not a stick of margarine, so she was pretty safe).  Candiace continued to taunt Ashley until Chris grabbed his bride and dragged her into the kitchen.  There, she continued ranting and raving about Ashley talking about her mother, and she insisted Ashley leave the house.

The others looked on with mild interest as they continued to eat, not even pretending to be shocked at the melee unfolding before them.  It was a mess, and it’s far for over. The ladies will pick up right where they left off next week, and they’re finally going to bring up Michael’s questionable comment to Ashley! Stay tuned…