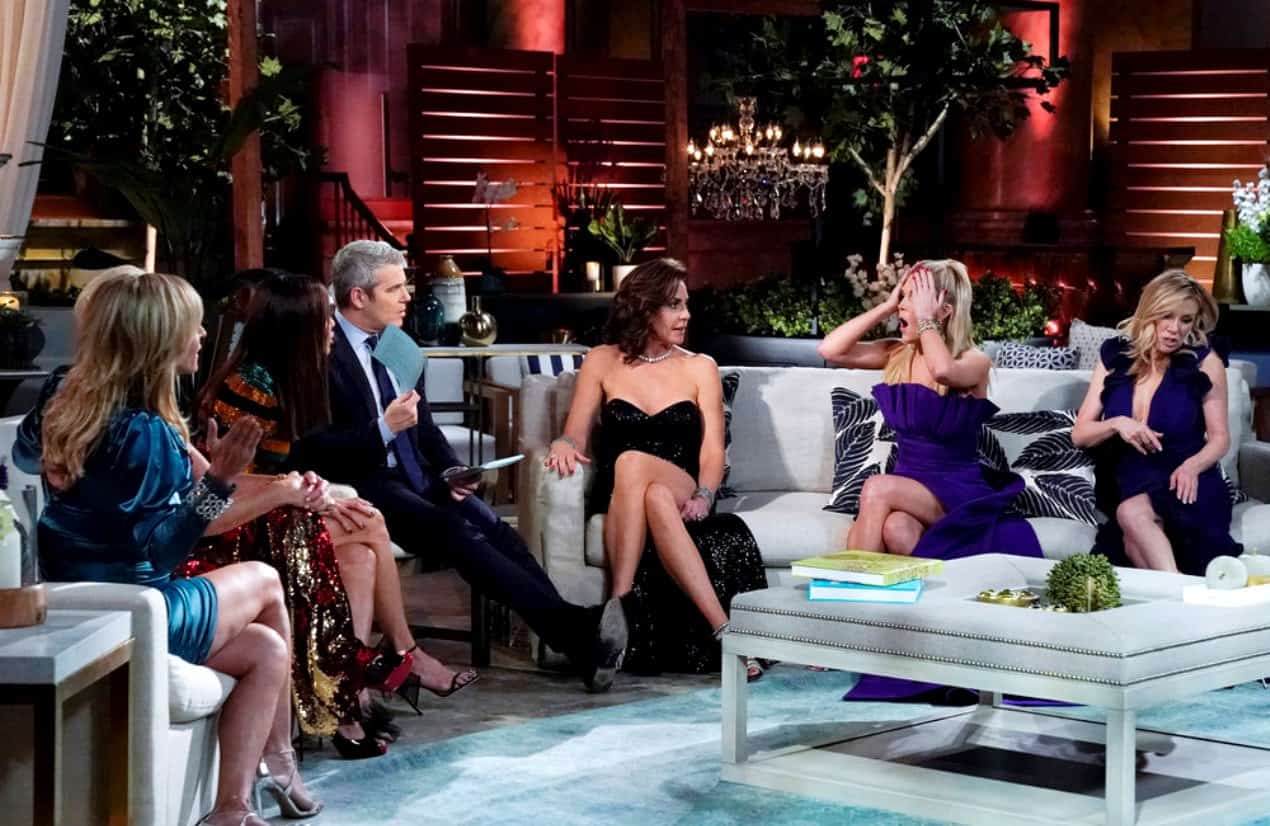 The second installment of The Real Housewives of New York City reunion aired last night, and I have to say the ladies must have finally settled in and gotten pretty comfortable on those couches because the claws came out! Readers, there’s a lot to unpack, so let’s dig right in…

The ladies began by talking about Ramona’s romantic life—she’s dating EVERYBODY these days.  Of course, viewers wanted to know if there’s any chance she might be getting back together with her ex-husband, Mario, after watching the two flirt all season long.  Ramona explained that while she’ll always be attracted to him, the exes are just friends.  They make a concerted effort to remain on good terms for the sake of their daughter.

Ramona is also “good friends” with Sonja’s ex, Harry Dubin, and despite getting caught “making out” with him (which she initially denied), Ramona said they were more like “kissing cousins.”  She added that their kiss took place one night after she’d had a few too many drinks.

This was the perfect segway into the many lies Ramona got tangled up in throughout the season.  The first being her shameless “table-hopping.”   You see, Ramona had invited Dorinda to be her plus one at a charity event, and then she ditched her for a cooler table.  Ramona had insisted at the time that it had all been a mix-up.  She said she believed at the time that she was assigned to the table she ultimately sat at, and not the lonely “table 62” where Dorinda found herself on the evening in question.

Dorinda was understandably angry.  Ramona, in true Ramona fashion, had refused to cop to her behavior.  Dorinda explained that if she’d simply apologize for being rude, they could just move on, which Ramona finally did-ish.  Last night she blamed her “less-than ageless” mind for the mix-up.  She said that she simply “hadn’t registered” the fact that she and Dorinda were at different tables.  Although you would think that it would have “registered” when she realized Dorinda was halfway across the room.

Either way, the matter was soon squashed, and the group moved on to yet another of Ramona’s lies—this one surrounding her birthday party guest list.  We all saw clips of Ramona telling her friend not to invite Sonja to the party, and Sonja was hurt and confused by the diss.  When called out on it during the season, Ramona had tried to blame her and Sonja’s mutual friend, saying she was the one planning the party.  Ramona said that she had “no say” in the guest list.  But after being called on the carpet last night, Ramona was forced to come clean-ish.  Her story changed (it had to), and Ramona said that she’d wanted the party to be a “personal” event.  She’d chosen not to invite Sonja or the other ladies because she hadn’t wanted it filmed for the show.  Okay, that might make sense, but even that story fell apart after Tinsley and Luann pointed out that for a “personal” event, Ramona sure had posted a lot of pictures to social media.  Ouch!

The ladies were giving Ramona zero wiggle room last night, and soon the conversation turned to what was easily the most egregious moment of all the egregious moments in the history of Ramona-dom: the day she brought up Bethenny’s late boyfriend, Dennis’ addiction, as proof that he was less-than smart.  It was an unnecessarily cruel comment to make.  While Bethenny hadn’t been there at the time Ramona said it, she’d certainly seen it later, and she was still visibly fuming last night.  She told Ramona that she expected “poor behavior” from her, but that this had been completely over-the-top awful.  She said that as she’d watched the season back and saw the many digs that Ramona threw her way, it became clear that Ramona had a “thing” with her, (she’s just now realizing this after 11 seasons?!).  But Bethenny said that was Ramona’s problem, and not hers.

Of her comments about Dennis, Ramona agreed they were “horrific,” and said that she apologized to “Dennis, God, and everyone else there” for making such a crass remark.  As for her relationship with Bethenny, she admitted that she was “scared” of her, and she never knew when she was going to get her “eyes scratched out.”  She said that Bethenny always came harder for her than anyone else, and she was never sure which Bethenny she was going to get. That was why she hadn’t offered Bethenny her condolences when they saw each other at Barbara’s clam bake.  Bethenny had to admit there was some validity to Ramona’s fear, but then she said that Ramona should stop talking behind her back.

Ramona finally said she apologized if Bethenny “felt” that it “seemed” like Ramona was always taking digs behind her back, but Bethenny wasn’t accepting such a poor excuse for an apology.  Bethenny said that it wasn’t about what it “seemed” like or what she “felt,”  and it had everything to do with what actually happened.   Ramona finally apologized more genuinely-ish, and she said that she was working on herself and “trying” to be better.  Host Andy Cohen asked if she was ever going to learn from these incidents, as it seemed they had these conversations at every reunion.  Of course, Andy being Andy, he had the receipts! He showed clips of several reunion specials, during which Ramona made similar statements.  Ramona continued to say she was “trying.”

When Bethenny pointed out that many viewers felt that her comments about Dennis had been the worst thing she’d ever done, Ramona again skirted responsibility.  She said she was surprised that Bravo had “put it up.” Andy wasn’t having that, and he told her not to blame the network for airing what was really said during a reality show.  At the same time, Andy also pointed out that Bethenny and Ramona had actually also shared some pretty sweet moments throughout the season, including when they’d shared their histories of growing up with abusive fathers.  The two admitted to having mutual respect for each other and genuinely caring for each other-ish.

This matter was also soon dropped, and the ladies discussed yet another cringe-worthy moment—the infamous “New York Loves Kids Event.” Ramona, Sonja, and Dorinda had become involved in the event to raise awareness of child abuse and to help get stricter laws enacted.  The event had been a “success,” according to Ramona, but the three women had made total asses of themselves when they got up to speak and started talking over each other and arguing in front of the stunned event attendees.

Dorinda said she’d talked over Ramona because she’d made the event “all about herself.”  When asked about her thoughts, Luann said she had been “horrified” when she’d watched it.  Dorinda told The Countess to relax—after all, her own behavior during the season had been pretty cringe-worthy too.  And well, I have to say, that point goes to Dorinda.

Believe it or not, the ladies actually let Tinsley speak last night! She talked about her poor dog, Bambi, who died earlier in the season.  As she recalled the failed efforts of the NYPD (yes, she really did dial 911 for a dog!) to revive her beloved pet, the ladies whispered among themselves and tried not to laugh out loud.  She also talked about her failed relationship with Scott, saying that they definitely weren’t back together, despite the fact that they took a trip together recently that “didn’t work.”

Of her financial situation, Tinsley said that she and Scott did not have a financial “arrangement,” as the other ladies assumed.  She said that she could afford her lavish lifestyle because of her family money and her own “work.”  The ladies seemed dubious, and it became apparent that they simply don’t have much respect for the youngest member of their tribe.  Bethenny said that Tinsley “set women back 100 years” during a recent interview, and when asked to elaborate, she doubled down, calling her southern belle debutante values and attitude “antiquated.”

Tinsley defended herself, saying that her financial situation was none of the other women’s business and that they simply didn’t want to hear her truth. Dorinda said she only wanted to “get to know” Tinsley better, and for her to be more “transparent” about her life.  Finally, Tinsley got in a dig of her own when Andy showed a previously unseen clip.  In the clip, Ramona told Tinsley that wearing so much makeup made her look “old for her age.”  When they discussed it, Ramona said she was sorry, but she said she still felt that Tinsley wore too much eye makeup and she didn’t see why she slept in it.  Tinsley retorted, “well, you sleep in your boobs, so…”  Hahahaha!

Finally, talk turned to Luann and her drinking.  She admitted that she “slipped” on Easter by having two mimosas.  While that doesn’t seem so bad, it was a violation of her probation, and when she took her mandatory breathalyzer, the drinks were picked up.  She discussed how difficult sobriety could be, particularly while spending time with the ladies, who continued to drink to excess in her presence.  She said she wasn’t sure they took her journey seriously, despite the help they gave her to get clean.

They all agreed that they weren’t so sure how seriously she took her own sobriety, considering how quickly she’d left rehab.  She told them she left to get back to work, and when Ramona tried to chime in, she told “Miss Pinot Grigio” to shut her mouth!  Ramona retorted with, “I think you’re still drinking, how about that?!”

The show faded to black on Luann’s stunned face, but you better believe this isn’t over! The conclusion of the season 11 reunion airs next week—stay tuned!