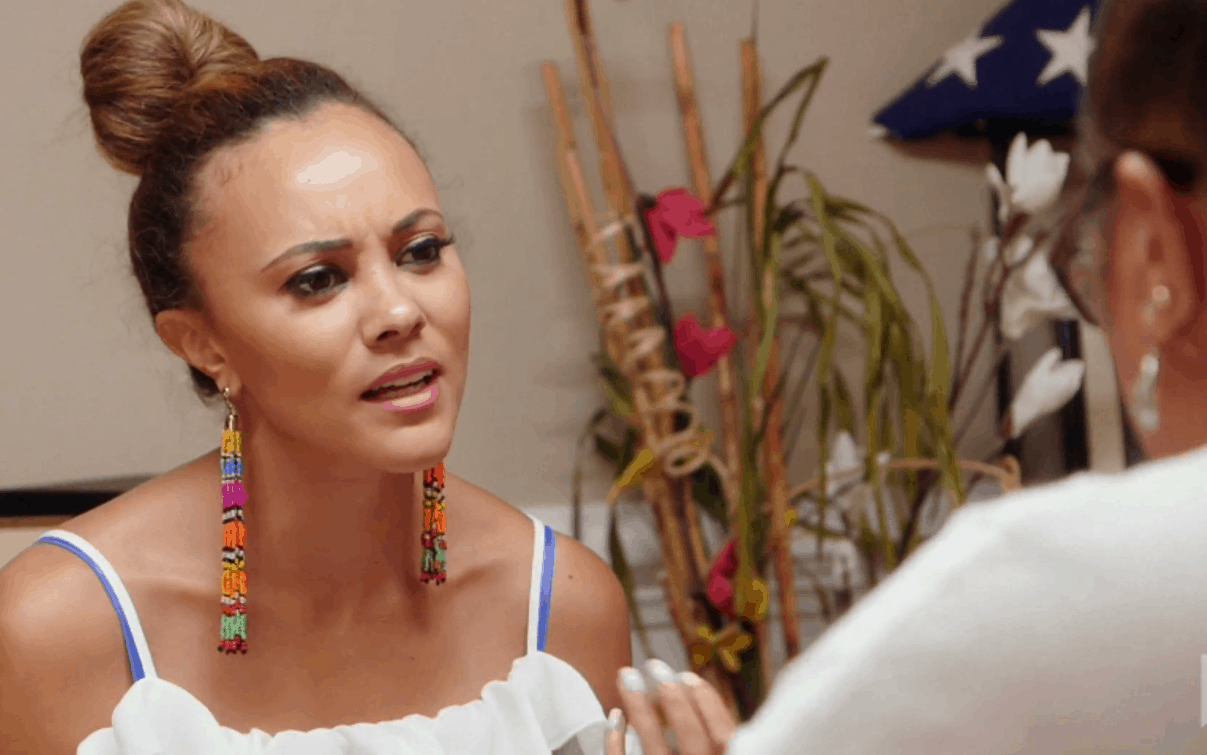 The ladies of The Real Housewives of Potomac were back last night.  While this episode may not have been as dramatic as the last few—there was no knife throwing, and no one threatened to hit anyone upside the head with a bottle—there were still some pretty major revelations.  Most of the ladies seem to be on the precipice of some major changes, as well.  In other words, it was damn good TV, and subtle in its delivery.  It just may have been the perfect Housewives episode.

We began with Candiace, who was trying her best to make amends with her mother, Dorothy, and change the way they communicate with each other.  It’s not looking great.  During their time together, Dorothy continued to chastise her daughter and tried to psychoanalyze her.  Candiace did her best to stay calm and hold her ground.  Her goal is simple—she wants to stop getting angry at her mother and “lashing out” at others around her.

But it’s Ashley that’s going through the biggest life change right now.  We learned last week that Ashley’s husband, Michael, was facing possible sexual assault charges after a Bravo cameraman accused him of groping him.  If found guilty, Michael could be facing a hefty lawsuit and up to 15 years behind bars!!

Now, most women would fall apart with all of this on their plate.  I mean, it’s humiliating, right? Her husband has been accused of something egregious, and the public nature of it would have most people hiding under the covers.  But not our Ashley! The girl is going to put on a brave face no matter what—and she’s going to work overtime to let everyone know that things are not what they seem.

This had Gizelle “highly concerned.”  She stopped by Ashley and Michael’s restaurant to check in on her friend, and to get some dirt.  She told Ashley that the streets were talking and that people were asking her what was going on with Ashley and Michael.  Ashley’s response was the same as it had been since last week.  She couldn’t discuss the “legal specificities,” but she believed in her husband, and the entire issue had actually “drawn them closer together.” What?!

Gizelle wasn’t quite buying it either.  During her confessional, she said that Ashley was simply trying to “brush the issue under the rug” and convince everyone that she was okay.  But to Ashley’s face, she was a little more diplomatic.  She said she was concerned that Ashley was being disrespected.  I mean, Micheal’s her husband, and groping anyone—man or woman—was simply not appropriate.  Ashley asked if this meant that Gizelle believed the cameraman, and Gizelle said that it wasn’t the first time Michael had been accused of such a thing.  Hold on—what?! Well, Ashley said the last time was different because that had been “with a friend” in “jest.” Groping “in jest”?! I’m not sure about that, Ashley.  Gizelle clearly wasn’t sure either, but Ashley simply said that she “knew the truth” about Michael and that “that was that.”  Well, alright, Ashley, you do you.

A bit later, Gizelle took some time to check in with her three daughters, and she took them apple picking at a local orchard.  She was upset to realize that her daughters had been feeling a little neglected, particularly her daughter Angel.  Angel claimed that she was getting the short end of the stick and that her mother played favorites.  Gizelle later took Angel on a lunch date to speak with her alone, and she promised that she had no favorites when it came to her children.  If anything, she explained, Angel was the “most important.”  Okay, that doesn’t exactly sound like a mother with no favorites, but I guess when your child is feeling down, you’ll do anything to make them feel better, right?

Gizelle went on to explain that Angel was her “dream child.”  She was responsible, self-motivated, and an excellent student.  Gizelle simply never felt she had to worry about her.  But Gizelle also knew that the only thing that really mattered is that her daughter felt slighted, and she vowed then and there to do better.  The two decided to do some DIY projects around their new home—just the two of them—in an effort to spend more time together and to make the house more fun for homebody Angel.

Now, Robyn doesn’t have any daughters, but she revealed last night, during a haircut with her friend and stylist, that Juan has suggested that they might try to have one! The exes are in a great place in their relationship right now, and Juan has vowed that he would be much more present than he was when their sons were little.  It was pretty clear by the way Robyn was talking about it that she was seriously considering having another child.  She still had one concern, though—if she and Juan were going to try to have another baby, she felt like they should probably get remarried first.

Speaking of babies, Monique invited Karen and Candiace to attend her sonogram and see the 3D images of her new bundle.  She had no intention of finding out the gender of the baby, but she wanted to share the special moment with her close friends.  Afterward, the three sat down and talked.  It was good to see that Monique and Candiace had squashed their beef from last week’s episode and that Monique wouldn’t be “dragging” her anywhere.  They told Karen that they were in a good place now and had talked everything out.  Karen was still concerned, though—mainly about Candiace.

Candiace explained that she’d been down about her relationship with her mother and that things had gone from bad to worse between them since her wedding.  In addition to their fighting over the ceremony, their relationship had changed now that Candiace was a married woman and no longer under her Dorothy’s thumb.  Still, Candiace said she was determined not to let it become an excuse for her own bad behavior.  Well, good for her.  We’ll see.

A little later, Ashley paid a visit to her therapist—seems like a good time for a check-in, am I right?  They discussed the ordeal with Michael and just why Ashley was so ready to accept him and stay in a marriage that didn’t really seem to be serving her best interests.  The answer was the most obvious one.  Ashley’s got “daddy issues,” and she sees her husband, more than a quarter-century her senior, as two men in one.  On one hand, he’s her partner and lover, but on the other, he’s very much a father figure to her.  You see, Ashley’s own father left when she was barely a year old.  Since that time, other than a phone call when she was around three or four years old, she hasn’t had any contact with him since.  It explains a LOT!

She also paid a visit to her mother, who attempted to help her to understand her father.  Ashley’s mother described him as a “loner.”  Ashley just couldn’t understand how a parent, loner or not, could possibly abandon their own child. After all, Ashley has been grieving the unborn child she lost, and she hadn’t even had a chance to meet the baby.  She couldn’t imagine giving up on a child she had raised for a year.  Her mother explained that her father had actually said he was prepared for fatherhood when she told him that she was expecting Ashley, but the life of a family man had ultimately proved too much for him.

Ashley was desperate to connect with him, though, and she told her mother that she’d tried reaching out to him on Facebook.  Despite the fact that she’d explained she only wanted to meet him and get to know him, he had blocked her.  She was heartbroken when she saw that her mother had connected with him on Facebook and that his posts revealed that he had a relationship with his other children, which only made her feel worse.  She vowed then and there to try one last time to connect with him.  But she said that if he rejected her again, she would be finished, but she would also know she had done all she could.

Still later, Candiace, Monique, and  Karen enjoyed a couple’s night out with their husbands.  Talk soon turned to Ashley and Michael. Well, “turned” is a bit of a stretch.  They were clearly chomping at the bit to discuss the scandal, and I wouldn’t be surprised at all if the whole evening was planned just so they could gossip.  We learned that the groping incident actually took place at Monique and Chris’ rainbow party, when Michael went inside to get out of the heat.  He was in the basement with the cameraman, and unfortunately, there are no cameras in the basement, so the cameraman had no evidence to support his groping story.

Now, this is where the plot gets even thicker—Candiace’s husband, Chris, is being called as a potential witness! You see, Chris was talking to Michael when the cameraman passed between them and was allegedly groped by Michael.  Chris says he didn’t see a thing. Hmmm—that seems unlikely.  Could Michael be telling the truth, after all?  Perhaps, but Candiace doesn’t think so.  She feels that Michael’s comments at Ashley’s uncle’s birthday party “give credence” to the cameraman’s claim.  Could be—or maybe Candiace is simply enjoying the suffering of her new archenemy.  Time will tell.  One thing’s for sure, things are about to get interesting for the RHOP crew.  Stay tuned!