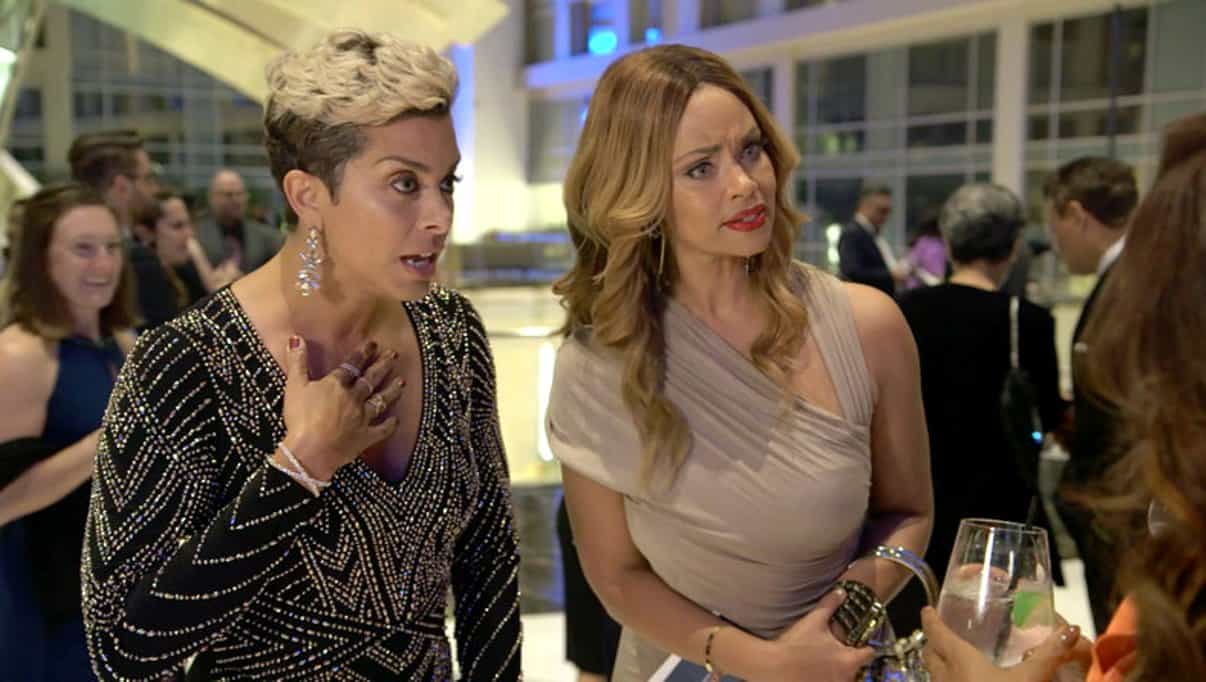 The Real Housewives of Potomac were back to their old tricks last night, and as usual, a lot of shade was thrown in all directions!  Everyone was still reeling from the fallout of the Michael drama. When it was announced last week that the charges against him were dropped, it seemed a bit anticlimactic, and so they tried their best to stir up some new drama.

Gizelle called Ashley, who had been angry at her for being more gossipy than supportive during her husband’s ordeal, and told her that she wanted to “move forward,”  and try to “leave the past in the past.”  To that end, she invited Ashley and Robyn over to see the new home she bought.  Ashley reluctantly accepted.

As the ladies walked the property, talk soon turned to Ashley’s feelings about her friends talking and laughing about her behind her back.  Robyn and Gizelle admitted that they had, indeed, been talking, but they absolutely were not laughing.  Ashley said she wasn’t so sure, as she knew at least one member of the RHOP crew had plenty of jokes: Candiace.  Well, this should have come as no surprise to Ashley, or anyone else, considering that Candiace and Ashley haven’t exactly been on the best of terms this year.  Well, Candiace pulled a knife on her, but you know what I mean—not the best of terms.  Robyn and Gizelle tried to say that Candiace probably hadn’t been laughing about it, but there was no convincing Ashley that Candiace’s heart was in the right place, as she had already seen the receipts!

You see, Monique had shown Ashley several text messages she’d exchanged with Candiace.  In pretty much every single one of them, Candiace was making a joke or sharing a laughing emoji, while Monique made supportive, concerned comments about wanting Ashley to be okay.  Robyn and Gizelle couldn’t believe that Monique showed Ashley the texts!  After all, Monique and Candiace were pretty good friends.  Why would she throw her under the bus that way?? Well, the simple answer is that Monique may play the innocent, but she’s as messy as any of the other women—even more so at times, and we’ve all seen it.  But she certainly isn’t the only one.

Since everyone was coming clean, Robyn and Gizelle told Ashley about Katie’s comments from the week before.  She’d called Ashley “stupid” for staying with Michael and for believing in him after the charges had been filed.  She’d also told them a story about Michael being a bit flirtatious with her boyfriend, Jacob, when the two were first introduced.  This truly surprised Ashley, as Katie ‘smiled in her face’ anytime they were together.  Ashley couldn’t believe she’d talk that way behind her back.  Believe it, honey—believe it!

Across town, with her ears surely burning, Candiace took her husband, Chris, house hunting.  Apparently, she’d meant what she said about wanting to get out of the house that they currently live in.  She wanted to get out from under her mother, Dorothy’s, control, as she pays half the mortgage.  Chris was in agreement about moving, but the 2.5 million dollar palace she had him touring last night gave him pause.  Candiace said it was just the asking price, and she assured him that they could afford it.  Suuuure. After all, she told him, in addition to her wig line and her pageant consulting business, she also had a trust fund.

The only problem was, she had no clue what was actually in the trust fund.  She didn’t want to ask her mom to allow her access to the money, as that wouldn’t really be much different than her paying for the house outright.  Chris said he didn’t want them to put themselves in a position where’d they’d have to struggle just to get out from under Candiace’s mom.  For once, Candiace agreed with her husband.  She didn’t put up much of a fight, and the two decided to keep looking.

Later on, Monique was home with her family, and she decided to play a not-so-funny joke.  She poured water on her legs and began yelling for her husband, Chris, saying that her water had broken.  She hammed it up, and she even pretended to call her OBGYN as she squeezed her eyes closed and moaned about it being too soon.  Chris fell for it hook, line, and sinker.  Monique stayed committed to her prank until she realized Chris was on the phone with 911, at which point she told him, laughing hysterically, that she was not actually in labor.  It really wasn’t funny. It was clear that Chris was alarmed, and the couple did suffer a miscarriage last year, so it seemed a bit morbid for her to fake being in distress.

While Monique was busy acting, the others were attending a charity gala that Katie had invited them to.  What charity? No one knows.  Katie was there because her mom “knows the board of directors,” and she only seemed interested in the cocktail hour.  She seemed to have forgotten to invite Ashley, and she said she felt Ashely had a lot on her plate, and probably wouldn’t have been interested anyway.  Candiace didn’t even try to hide the sarcasm in her voice when she said “oh well.”  This prompted Gizelle to tell Candiace how Ashley was currently feeling, and that she’d seen all the texts she’d exchanged with Monique!

Candiace was shocked that her friend would ‘throw her under the bus’ that way, but Gizelle and Robyn explained that that was just how Monique rolled.  Candiace’s mother, Dorothy, who was in town (again) and had found some reason to tag along with her daughter to the gala (TV time) sat listening in barely disguised glee, as her daughter learned that her friend was not someone she could actually trust.

Katie’s boyfriend, Jacob, was there too.  This was a pretty big deal for a gala that didn’t seem to have a purpose!  Gizelle immediately pounced on him, and she asked him to elaborate on what Katie had said about the day he’d met Michael.  He corroborated what Katie had told them.  Michael had asked why he had more than one cell phone, and when Jacob explained that one was for personal use and the other for business, but that he always answered the business line first, Michael said he bet Jacob would drop his business call and answer his personal line if Michael called it.  Granted, it was an odd conversation for two straight men to have while being introduced by their significant others, but hey—this is Michael we’re talking about.

Seeing Candiace beaming at the news was pretty much proof positive that she found a great deal of enjoyment in the situation, but so did the other ladies, who laughed and cackled as he told the story. Gizelle said during her confessional that she didn’t know what was up with Michael, but at this point, she believed the cameraman story.  Needless to say, Ashley is not going to like that!

But last night, she wasn’t there, and she had bigger fish to fry, anyway.  She was finally going to meet her father.  She and her mother took a trip to meet her aunt and uncle, and they told her that they’d agreed with her mother’s choice to keep her from her father throughout her childhood, as he was in no position to be a parent to her at the time.  But now, they agreed to take her to his home so that she could finally meet him and hopefully get some answers, or even just closure from the man she’d been wondering about all her life.  They drove to his house, and just as they were about to knock on his door, the camera faded to black.

We’ll have to wait until next week to see how it all plays out, viewers, but rest assured, it will be dramatic. Stay tuned!