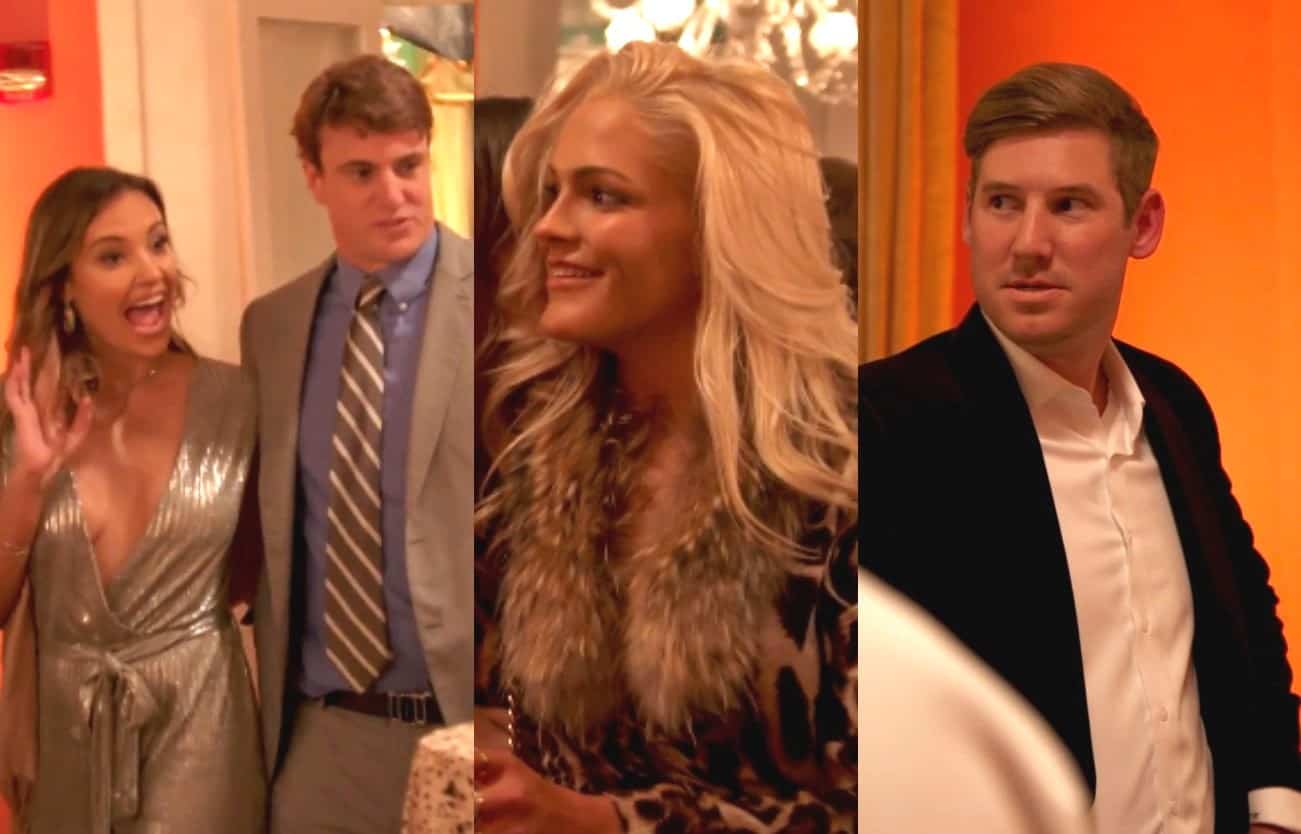 Was this, like, the shortest season of Southern Charm ever?  There are certainly a lot of unresolved issues that need to be settled before this episode ends…

Patricia is hosting a ball (really, it’s just a reason to get the entire cast together dressed up, and for Patricia to highlight just how much money she really has… and apparently she has a lot of it!). Patricia pays a visit to Gwynn’s, the infamous clothing store of the rich …and the rich. There, Patricia chats it up with her favorite employee, Kathryn. Let’s discuss Patricia’s constant prying into Kathryn’s personal life. She’s like a pushy mom who loves to hear alllll of the gossip. Patricia also does her fair share of spilling the tea. She shares that at the fox hunt, Shep overheard Ashley tell her friends, “Kathryn will never get custody of her children.” Kathryn looks like she’s about to cut a b*tch and the ladies smell bullsh*t and are simply not buying the new-and-improved Ashley.

In preparation for the big festivity, Shep pays a visit to Chelsea at her salon for a fresh cut. Shep shares that he’s bringing the “girl on the couch” from the notorious video for his date, and Chelsea lets Shep know that’s not a cool move. Shep could care less about coming off as rude or insensitive, and I can’t say I am surprised… No one can put their finger on why Shep’s goal in life is to make Austen and Madison miserable. Perhaps he’s jealous of Austen? Didn’t he tell Madison back in the day that as soon as she’s divorced she should call him first? Interesting…

When Austen finds out that Shep is bringing the “other” Chelsea to the event, he claims that Shep is simply doing it for revenge and a booty call. Shep knows exactly what he’s doing, and he’s loving every second of picturing Austen squirm.

Naomie and her adorable French-speaking mother are painting Naomie’s bathroom. The ladies get to talking about Naomie’s relationship with Metul. Her mom is pushing for marriage and babies, and Naomie is chomping at the bit to make him hers for life. After a relationship with Craig, anything is better than a dude who sews pillows for a living, but Metul seems a little too controlling, if you ask me…

“I need some weave help.” Who would have thought that Eliza Limehouse would be getting a weave for the ball? Joining Eliza at the salon is everyone’s favorite villain, Ashley. Eliza spills the beans to Ashley that Pat is throwing a cocktail party. You can see the crazy lady’s wheels turning, and you KNOW Ashley is going show up. Ashley rants about Patricia: “She’s a piece of sh*t.” Ashley is going off about how she should have never believed Patricia and done her dirty work (I’m seeing a Teddi/LVP situation unfolding here…).

Ashley claims that Patricia made her think that Kathryn was a terrible person, but now Ashley swears she sees the truth about Kathryn. Because of this, she despises Patricia. Eliza reminds Ashley that everyone deserves forgiveness, even Patricia. Ashley retorts, “Karma’s a b*tch and she’s going down.”

Now that Austen found out the 411 about Shep’s date for the ball, he feels obligated to tell Madison. Madison is livid that Shep would invite one of the girls who set up THE video in Austen’s house. Austen tells Madison to “get her mind right” and to “temper drinking” tomorrow. Basically, this sounds like a terrible night out, if you ask me.

Patricia pays a visit to the ball’s event space. “The Stag’s ball” is the theme of this year’s party. Traditionally, this means that all of the guests show up sans dates…if only Shep got that memo. Would save everyone from a whole lotta drama…

Kathryn hosts Cameran, Chelsea, Naomie, and Danni for some pre-ball beautification. Kathryn explains that her new boo will be in attendance and swoons over him. She overshares that, “I call him my chicken nugget and he calls me his honey mustard.” OMG. On a completely different note, Kathryn lets the girls know that she had an insider at the salon where Eliza and Ashley were speaking the night before. She warns them that there’s a high potential of Ashley showing her face at the ball. Everyone is shocked she would have the balls to do that (pun intended). When the girls find out that Shep is bringing one of the girls involved in Austen’s alleged threesome, they squeal in delight in anticipation of the drama that’s bound to ensue.

Sidenote: I always wonder where Madison’s child is? She has an awful lot of free time… Patricia’s ball and purple carpet certainly do not disappoint. I love that Patricia brought her very own bodyguard to the event…he looks like one of those guys that stand on the sidelines of the Jerry Springer show. I’m shocked to see Jason, Cameran’s husband, show face. Everyone is decked to the nines—some in pantsuits, some in gowns…but nothing could prepare me for Kathryn’s over-the-top sheer dress and red fur. Kathryn towers over her “chicken nugget,” who looks incredibly out of place in his wrinkly suit.

How many times in this episode did Austen tell Madison he loves her? He has to be feeling a bit insecure as his past catches up to him. They schmooze with Patricia and Whitney until Craig and Shep make their appearance. Shep appears to be wasted already, and he can hardly control his excitement because Craig jumped on the bandwagon and brought the OTHER woman from the video as his guest. Clearly, they are trying to get under Austen’s skin and are being incredibly immature about it. Shep repeats over and over again that he doesn’t “give a f*ck” about Madison’s feelings, and we get the message loud and clear.

Somehow, Danni and Madison wind up alone together. Danni is a true sweetheart because she consoles Madison (who is beyond upset by woman 1 and woman 2), despite the fact that Madison attempted to ruin her reputation by claiming Danni had chlamydia. Madison apologizes for using her words to hurt Danni, and the girls settle the issue for once and for all.

Meanwhile, Craig tries to play innocent in front of Austen, and he claims he only needed a date for the ball. He wasn’t trying to be vindictive (Craig even admits in his confessional that he’s “kinda being an a*shole”)…unlike Shep. Cam tries to talk sense into Shep, but he couldn’t care less about hurting Austen’s feelings.

Chelsea decides that the ladies should band together and talk to the women from Austen’s video (aka Craig and Shep’s dates). The crew gathers round and demand to know the truth. Woman 1 claims she slept on the couch and woke up to a crazy b*tch screaming outside. That would be Madison…Austen’s girlfriend. I don’t blame her for yelling, but I digress. Woman 2 denies sleeping with Austen, as well.

In the meantime, Austen drags Shep aside to have a conversation with him. “It was a blatant, white-glove off, slap in my face” to bring those girls as dates. Shep explains that he is not gonna “die on the cross” for Austen and that he keeps playing the victim. Austen tries to figure out the actual cause of Shep’s anger and resentment, and after talking in circles, the guys decide it’s all over. Austen states, “This friendship is in total ruins. Don’t let the door hit you, pal.”

As Shep makes his way make to the party room, he finds Craig sitting alone on the steps. Craig is feeling a little guilty about his choice of date. He tells Shep, “I didn’t know this was all a ploy for your inferiority complex.” Ouch. Continuing with the awkward encounters, Kathryn finds Whitney before he heads out and lets him know that she forgives him for denying their sexual escapade. Whitney tells Kathryn he did that because he was trying to be a gentleman and protect her privacy. At least some of the drama gets settled…

Ever the pot-stirrer, albeit a classy one, Patricia suggests that Madison confront Shep about his intentions. Because everyone walks on eggshells around Patricia and does what she says at all times, Madison seeks out Shep and has a chat with him. Madison starts off by saying, “I apologize for saying what I said about you.” WOWOW. I think Madison realized that perhaps SHE was the true reason for the rift in Shep and Austen’s friendship. Shep slurs that Austen deserves to “have a little pit in his stomach” and repeats that he doesn’t care about Austen. Honestly, this sit-down chat is pointless because Shep is so tanked he probably won’t remember what Madison said to him the next day. With that, Austen and Madison leave the ball to avoid any further drama.

Fifteen minutes later…a very special party crasher slowly makes her way to the ball. She creeps up the stairs and finds Patricia, who instantly introduces Ashley to her little friend, Mr. Kale. Mr. Kale escorts Ashley right out the door, but not before Ashley shouts terrible things at Patricia. Anyone else notice how as Mr. Kale led Ashley out, Patricia grabbed Kathryn in an embrace, almost as a FU to Ashley? Touche!

Once outside of the party, the crew listens in from the balcony as Ashley makes an irate phone call. “Thomas, they embarrassed me.” Wait, what?! Ashley called THOMAS!? And honestly contemplated calling 911 after being led out?! This lady is crazier than I thought she was… We find out that one month later, Ashley is back in California and has a new man… Wonderful. She is totally going to infect the West Coast with her absurdities now!