The RHOC Recap: Gina Reveals Her Husband Matt’s Affair is What Led to Divorce 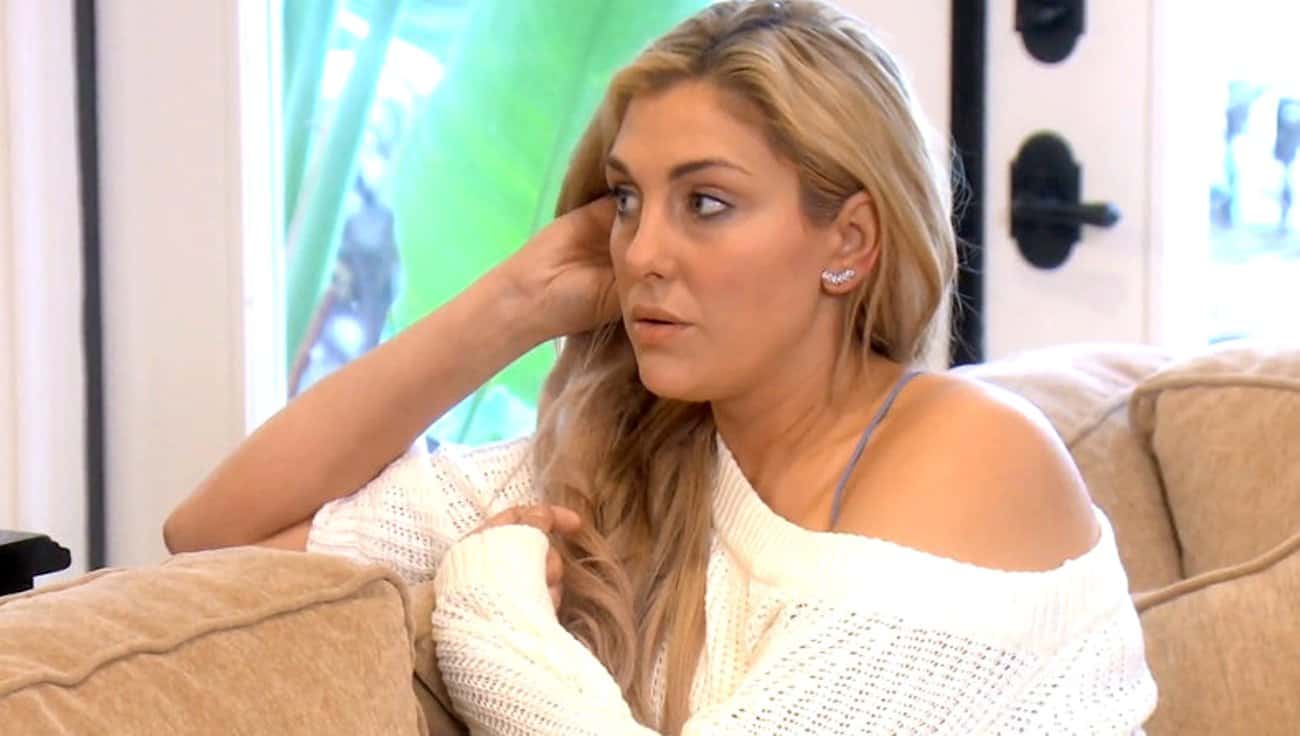 Gina opens up about her ex-husband as she finally reveals the real reason for her divorce, as new friendships are forming on this episode of the Real Housewives of Orange County.

The biggest bombshell of the episode comes when Emily has Gina over for some girl talk. After Emily aggressively pops champagne (that Gina can’t even drink…things must be REALLY tough for Emily these days since Shane has been MIA), they hunker down on the couch and catch up. Emily talks about her planned anniversary trip to Vegas with Shane that she was so looking forward to. She lets Gina know that everything has since fallen apart. Emily had hoped to learn a “sexy dance” for her Mormon husband, but that idea went over like a lead balloon.

Emily is devastated that Shane is not interested in her learning said sexy dance, as she hoped he would think, “Wow, that’s a really cool thing she did.” Emily further states that her stress has caused her alopecia to come back and that Shane has been staying at a hotel “cuz he’s studying for the bar.” Can these two just end their marriage now and save themselves a whole lotta trouble down the road?!

When Emily asks Gina what’s new with her, she instantly becomes visibly upset. First, Gina storms away and hiccups that, “I can’t talk about this.” And then…we find out what Gina has been holding in for a very, very long time. Her now ex-husband, Matt, had an affair.

Despite the couple’s therapy and attempts to move forward, this was the reason for the demise of their marriage. Apparently, this isn’t a big secret, as Emily “knew all along he was having an affair.” #Awkward. To this day, Matt is STILL seeing the other woman, and Gina says that she found the Valentine’s Day card from her to him. Ouch. Gina keeps repeating that things are so bad and she feels really hurt because they “think they’re in love.” Poor Gina can’t catch a break, huh? Emily tries to analyze Gina and tells her that she no longer has to protect Matt, as it is affecting her mental health. Man, when Gina decides to spill a secret, she really does… on television no less!

Meanwhile, back at the beginning of the episode, Vicki did it again…aka put her foot in her mouth. For starters, even SHE admits that she has never seen Kelly actually DO cocaine. But alas, there she went blabbing away that Kelly is a cokehead, and in turn, ruining Kelly’s reputation. Shannon tries to smooth things over between the ladies, but Kelly storms away and has some serious crocodile tears.

As Kelly fake cries to Tamra and Shannon, Braunwyn, left with Vicki and Gina, jumps in to let Vicki know she’s wrong. Her “instant vibe” from Vicki is a whole lotta ick. Now that she has her cornered, Gina takes the opportunity to bring up the newest Vicki drama. According to some texts she saw, Vicki called Gina “another jailbird” because of her DUI arrest. Still, Vicki continues to do what she does best: deny, deny, deny.

After the dramatics subside and Kelly and Vicki exit the party, the real fun begins. Shannon basically has a crush on Braunwyn and may or may not want to haze her into the tres amigas. Goodbye Vicki, hello Braunwyn. Wait until Vicki gets a load of this, especially because she is already beefing with the lady. She even refuses to learn the correct pronunciation of Braunwyn’s name. “I don’t know who Brownwind is.” LOL.

As Braunwyn gets inducted into the tres amigas by dancing on the kitchen island (vintage move), Tamra shouts, “We’re gonna get naked.” It appears as though Shannon has some girl-crush-competition. Vicki who??

Gina’s busy making her new house a home before her parents come to visit. She’s looking forward to seeing them as things have been going pretty sh*tty for her lately, especially with her ex-husband, Matt. Loving how GinA’s father’s name is GinO. Classic. Gina takes her parents on the grand tour of her new place, and then they all settle into the guest bed (??) to discuss recent happenings. OMG. Gina’s mom actually said that Matt has “hit her up” on her phone. How hip is she?! Gina gets really cagey about what exactly is going on between her and Matt, and this does nothing but cause more concern for her mom and dad.

New Shannon walks with a swagger, huh? She heads out to meet up with her brand-new homegirl, Braunwyn, and it seems like this couple is really hitting it off. After some small talk, Shan wants to get down to the good stuff. Why doesn’t Braunwyn get a good feeling about Vicki? (Maybe cuz she has a brain…).

Braunwyn points out multiple things about her first meeting with Vicki, and Shan can understand, as Vicki has done her wrong in the past. The women further commiserate over being moms, and Braunwyn discusses her dancer daughter’s OCD. She opens up about how Rowan had to be sent away to get the much-needed help she deserved. While listening to Braunwyn’s tale, Shannon becomes overly emotional and teary. Shannon shares that since the divorce, her children’s grades have seen a dip, and it’s evident that these women only want the best for their children…

Over in Aspen, Kelly is celebrating some mother/daughter time by buying her kid, Jolie, excessive amounts of Gucci shoes and by taking selfie videos. Adorbs.

Back in California, Braunwyn and her daughter, Rowan, go and visit her dad, Sean, at his office. Rowan has started her own dancewear line, which is a great way to keep her mind healthy and alleviate some of her OCD issues. (Can we discuss Sean’s necklace collection? Holy smokes…). Lucky for her, her father has the resources to make this happen for Rowan, and he shows her the videos he plans on launching for the line. Must be nice to have oodles of money.

Gina and Tamra are heading out on the town. Gina is spilling the whole “Matt had an affair” thing to anyone with ears now that she got it out once. Tamra suggests that Gina move on and start dating. Great band-aid fix! Braunwyn and Shannon join Tamra and Gina at the restaurant, and Shannon decides it would be a great idea to invite Vicki. WHY. As they wait for that trouble-maker to arrive, Emily asks her gal pals, “Can we go to Rodeo Drive cuz I’ve never been there?” I smell a girls’ trip in the making…

When Vicki arrives to join the blond brigade, the whole vibe changes. Braunwyn shocks everyone and apologizes for jumping to conclusions about Vicki. I don’t know WHY she did that…she says she’s sorry to Vicki and decides to start fresh. They toast with tequila, and the next thing you know, things get weird. Why is everyone kissing each other?

The women jump from one extreme emotion to the next. Vicki becomes alllllll fired up about Kelly. Vicki outright says she has no respect for Kelly and she is over her bullying. She is so delusional that she doesn’t even realize the cocaine comment is a low blow which might have CAUSED the excessive bullying by Kelly. But alas, two wrongs don’t make a right. Vicki, always the pot-stirrer, yells out, “Kelly knows that I know more than I say.”

Vicki promises she isn’t telling WHAT she knows, but that leaves all of the ladies salivating to find out more. Naturally. Tamra asks, “Is it about the train?” Vicki immediately fake freaks out. “We had a code of silence that none of us can talk about the train.” I wanna know about the train!! This is exactly the reaction Vicki had hoped for. Something tells me that it won’t take Vicki long to break that “code of silence,” but we are hit with a “To be continued…”