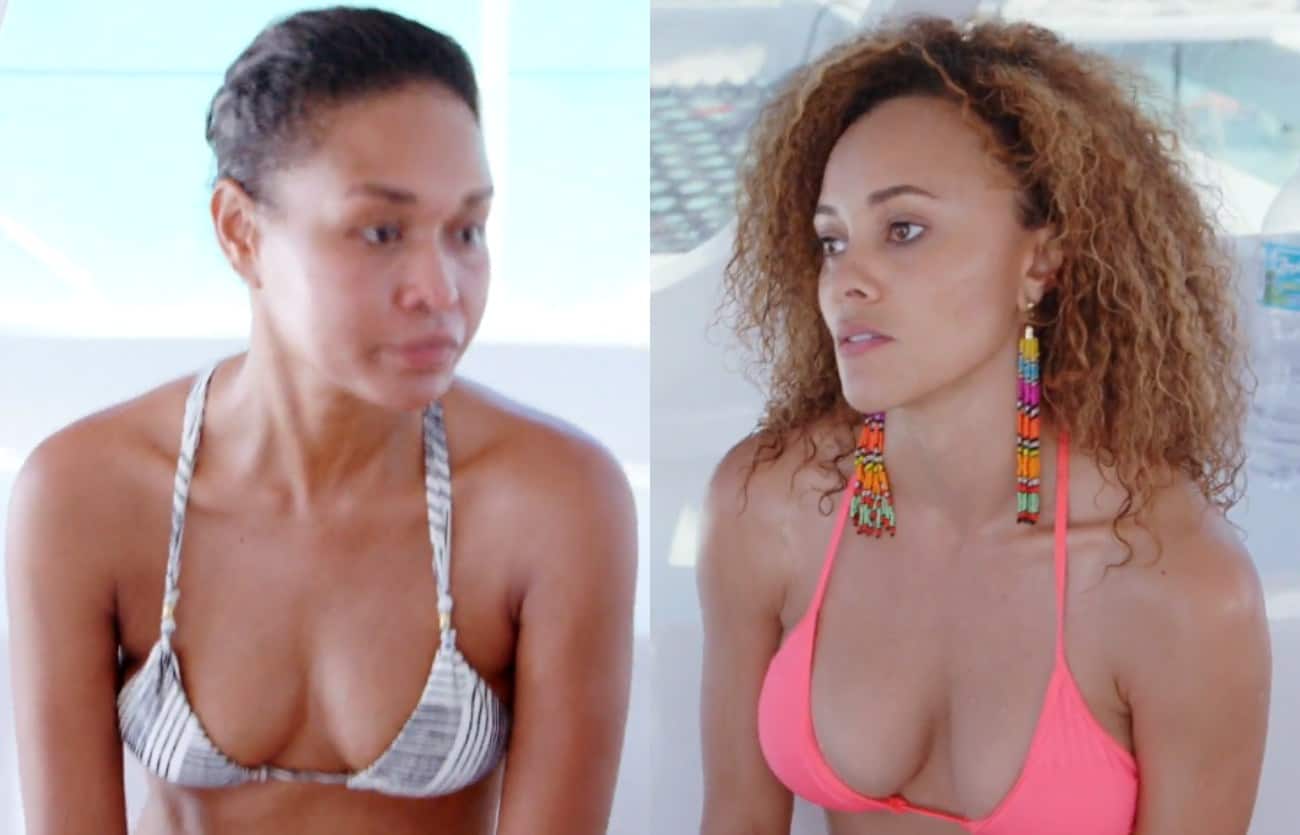 The ladies of the Real Housewives of Potomac continued their girls’ trip to The Cayman Islands last night, and, as usual, they brought the messy with them.

When we picked up with the RHOP crew, it was their second day in paradise, and Ashley was feeling “guilty” about her showdown with Katie the night before.  She called her mother to talk it out, and she said that she regretted that she failed to “exercise compassion” about Katie’s personal issues during their confrontation.  She vowed to work harder to be a better person.

When Ashley broached the subject with Gizelle and Robyn over breakfast, they agreed.  They said that Katie hadn’t been in the proper headspace to hear what Ashley was trying to tell her.

After breakfast, the ladies enjoyed a boat ride and spent some time learning about stingrays from a local guide.  A good time was had by all—except for Katie, who remained on the boat while the others frolicked with the marine life.  Ashley decided that she should be the one to check on Katie, as she was likely the reason she was feeling down.  Katie said she simply wasn’t feeling well, but Ashley apologized anyway, and the two women hugged it out.

After the boat ride, the ladies went to lunch.  Gizelle mentioned how nice it had been to see Candiace and Ashley getting along so well while they’d been out on the water.  The two had been pretty buddy-buddy, and at one point, Ashley had even given Candiace a piggy-back ride in the water!  It was sweet, if not a little weird, considering the two have been at each other’s throats all season.

It would have been better to just let sleeping dogs’ lie because Gizelle’s “observation” only seemed to remind the two women that they were enemies.  Candiace said she felt that Ashley owed her an apology for coming into her home and acting like a “shady a**hole,” which had led her to “act inappropriately.” Ashley said she wasn’t responsible for Candiace’s actions at her home that night, and that nothing she’d done warranted Candiace threatening her with a butter knife.  Ugh—here we go again with that damn butter knife.  All of the women looked exhausted, and Robyn couldn’t believe that Gizelle had chosen to bring up the whole situation again.  But well, that’s Gizelle.

The matter was quickly dropped (for the moment) and the ladies continued their day of fun in the sun with jetski rides.  Once again, Katie took a pass, and she sat alone watching the others.  This time, it was Karen who checked on her.  Just like Gizelle, Karen chose to take the messy route by bringing up a sore subject while trying to appear empathetic.  She said that she felt like Ashley’s actions the night before had been “inhumane,” and she encouraged Katie to call her anytime she needed to talk.  Hopefully, Katie knows better than to take the Grande Dame up on that offer.  Otherwise, her problems will be broadcast to the rest of the world the minute she hangs up the phone.

Later, Katie stopped by Robyn and Ashley’s suite to let them know that she wouldn’t be joining the group for dinner that night.  Smart move, if you ask me.  She said she wasn’t feeling well, and that she’d been off for the last several weeks, feeling exhausted and eating excessively.  Robyn wondered aloud if she might be pregnant.  Katie simply shrugged her shoulders, although she did acknowledge that she was sexually active and hadn’t been using birth control, so who knows?  They may be another Potomac baby on the way sooner than we think.

But Katie wasn’t feeling so sick that she couldn’t be messy.  Keeping with the theme of the night, she brought up Robyn’s unspoken beef with Gizelle.  Katie hadn’t been there the night Gizelle ruined Robyn’s open house by loudly confronting Monique in front of her guests and investors, but Robyn had told her all about it.  Robyn admitted that she still hadn’t mentioned the issue to Gizelle, and Katie and Ashley eagerly encouraged her to do so as soon as possible.  These women are a trip!

The drama started before the women even made it to dinner.  On the ride to the restaurant, Robyn announced that Katie wouldn’t be joining them.  Everyone immediately started blaming Ashley.  Gizelle reminded Ashley that she’d told Katie that she wasn’t ‘strong enough’ to be a member of this group of women.  Karen piped up to say that Ashley had gone “very dark” at that moment.  Then, Karen added that when Katie had agreed with Ashley’s assessment of her, it had ‘broken her heart.’ Yeah right!

Ashley tried to defend her words by reminding everyone that Katie had been in the wrong because she’d gone around talking trash about her marriage.  When she caught Candiace rolling her eyes, it seemed that the two were going to launch back into their earlier argument, but Candiace simply said that she’d been looking off into the distance.  She was definitely rolling her eyes, and really, who could blame her?

Soon after the ladies sat down to dinner, Gizelle started talking about her relationship with Karen, calling it “stronger than a bag of rocks.” Karen agreed, somewhat, and said they’d made a great deal of progress (weren’t they just going at each other’s throats in the lobby of the hotel the day before?).  Gizelle then proceeded to pat herself on the back for taking ownership of her part in their troubles.  It was just the opening Robyn needed.

She said that as long as Gizelle was owning up to her behavior, she needed to own up the drama she’d caused at the open house.  Robyn added that she understood why Gizelle had been upset with Monique, but it simply hadn’t been the time or place.  In a rare moment of self-awareness, Gizelle shocked everyone by immediately acknowledging that she had been in the wrong, and she apologized for it.

The besties quickly moved past it, and talk soon turned to Robyn’s relationship with her ex-husband, Juan.  Robyn said they’d discussed re-marrying “one day,” and she added that she couldn’t see her life with Juan in it.

Talk then turned to Candiace’s relationship with her husband, Chris, and his cookbook, which Candiace said was due to be finished by the end of the year. Ashley asked if Candiace had a financial stake in the book.  When Candiace said no, Ashley advised her to put something down on paper, as business and marriage often make strange bedfellows.  Candiace dismissed the advice—after all, as Karen said, Ashley’s not exactly in the position to be doling out marital advice.  Candiace simply said that the cookbook was Chris’ thing, and she was very proud of his accomplishment.

Gizelle suggested that Ashley and Candiace take some one-on-one time together to hash out their differences in private.  Both women agreed, and to that end, they met the following morning on the beach for yoga, although Candiace would have preferred a cocktail.

When they sat down together after their workout, Ashley said she felt they weren’t “talking constructively.” Candiace agreed, and she said she was very hurt when Ashley said they weren’t really friends during their ladies’ trip to New Orleans.  Candiace said she had really gone out of her way to try to be friends with Ashley and spend time getting to know her.  Ashley apologized, and once again, the ladies were on good terms—for the moment.

On the way back, they ran into Gizelle, who informed them that Katie was nowhere to be found, nor were her belongings, despite the fact that the front desk had said she hadn’t checked out.  The show faded to black on the ladies’ looks of faux concern, but not to worry—the drama continues next week. Stay tuned!