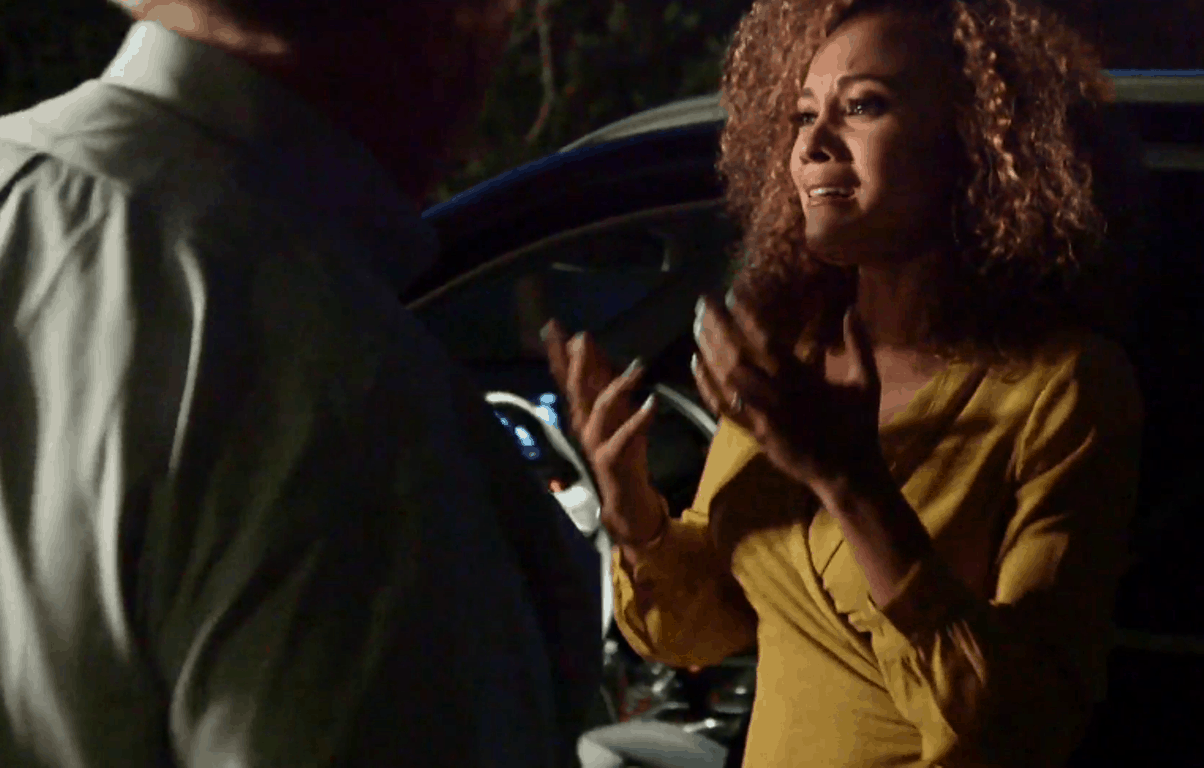 Well, they say you can’t pick your family—but you can pick your friends.  With that being said, why on Earth would the woman of The Real Housewives of Potomac ever pick each other?!  I’ve been asking myself that for three years, and last night’s episode certainly didn’t provide any reasonable answers.

When we picked up with the ladies, they were all spending some quality time with their families—or at least trying to.  Ashley finally knocked on her father’s door, but it only brought more hurt.  The two made eye contact when her aunt, who accompanied her on the trip, knocked on his door, and she announced his daughter was there to meet him.  He responded by closing the door and locking it tight without ever saying a word.  Needless to say, Ashley was devastated.

She sobbed as she explained that all she wanted was for her father to finally acknowledge her existence.  Her mother, who’d waited in the car, said her father was an “a**hole,” and she assured Ashley that his rejection wasn’t about her.

Ashley’s husband, Michael, who hadn’t really been on board with her making the trip in the first place, was also hurt for her.  However, Ashley said she actually felt “stronger” for having made the attempt to face him.  She added that her mother hadn’t spoken to him in 28 years, and her aunt hadn’t spoken to him since 2010.  Having him slam the door in their faces may have actually been the closure all three of them needed.

Around the same time, Karen, who’d had a wonderful relationship with both of her parents, and sadly lost them both last year, paid tribute to them, along with her sister, as the two women launched white balloons in their memory.  They both cried as they thanked their parents for raising them to be the strong women they were.  It was quite beautiful.

As for Candiace, she’s still working on her relationship with her mother, Dorothy.  The two of them, along with Candiace’s younger sister, Crystal, donned matching fur coats as they enjoyed an al fresco lunch together.  Candiace and Crystal lectured Dorothy on mutual respect being key in a healthy mother/daughter relationship.  As usual, Dorothy basically poo-pooed the idea that she played any part in the problems that plagued her relationship with Candiace.

Talk soon turned to Candiace’s relationship with her friends.  She mentioned that she was angry with Monique for sharing the texts they’d exchanged about Michael’s butt-groping scandal with Ashley.  Dorothy advised her to talk to Monique about it, as she believed their friendship was ‘worth working on,’ but Candiace was skeptical.  She wondered if she’d seen the true Monique, and if that was someone she could trust.

For her part, Monique had been enjoying a few weeks off from the women and their constant drama.  She’d been sticking close to home, and she was mostly concerned with preparing herself, her family, and her house for the new baby.  It would turn out that she was right to keep her distance.

You see, Robyn was throwing a “sell-a-bration” to reveal the transformation of the house she’d flipped, and she’d invited the ladies and potential buyers to the open house.  She was proud of what she’d accomplished and the fact that it was going to help her family on their way back to financial solvency.

The house looked fabulous, and it was perfectly understandable that she’d want to show her friends what she’d been working on for the last year.  The only problem was, she mixed her friends with her business, and her friends don’t know how to act—especially in front of an audience.  As usual,  they showed all the way out!  Robyn should have expected this.  What she didn’t expect was for her own bff, Gizelle, to be the problem.

It all started out fine.  The ladies oohed and ahhed over the home’s transformation, and they congratulated Robyn on her vision.  And then, Monique walked in.  She greeted the ladies warmly, and when she got to Gizelle and went in for a hug, Gizelle stopped her short, and said, “Oh you’re gonna hug me?! For the third year in a row, you’re saying Robyn and Ashley don’t like me.” Good grief.  It was so unnecessary.  Seriously, just why? Gizelle and Monique haven’t had any beef this season, and all of this vitriol seemed to be coming out of nowhere.

Monique just walked away, and she said she didn’t understand why they couldn’t just celebrate Robyn’s success.  She suggested that Gizelle take a tour of the house, i.e. get the hell out of her face.  But Gizelle was on a roll, and she followed Monique into the living room, which was still in earshot of the other guests, and continued her tirade.  She said during her confessional that she’d thought about pulling Monique off to the side and talking to her privately, but that her fake greeting had been too much for her to take.  This was an outright lie.  Gizelle is just messy, and the relative peace of the day was simply more than she could bear.

So, what on Earth was all of this about, you ask?  Well, not much, it turned out.  You see, Monique had mentioned to Ashley that she often felt like Robyn and Gizelle didn’t take her seriously, and that the fact that she was financially stable seemed to make them feel that she didn’t have any real problems.  That’s literally all it was.  No trash talk, no betrayal, no negative comment at all really.  But, of course, Ashley, pot-stirrer extraordinaire, went running back to Gizelle, and she told her that Monique had said that she and Robyn didn’t like her.  Ugh—these women are exhausting!  And, really, you would think that Ashley would have had more to worry about than causing petty squabbles, considering that her husband had just narrowly escaped jail time on sexual assault charges!

Karen was quick to point all of this out, saying that she ‘called foul’ on Ashley for even bringing it to Gizelle’s attention and starting a buck of mess.  Of course, Ashley didn’t see it that way.  She said that the only way to fix a problem was to acknowledge it.  She’d simply wanted Monique, Robyn, and Gizelle to work out their issues with each other, just as she and Monique had worked out their own issues and had gotten to a much better place with one another.  That’s a cool story, but I call BS on all of it.  Acknowledging issues is a fine idea in theory, but Ashley only ever seems to practice it when the issues are someone else’s.  When they’re hers (or her husband’s) she “can’t talk about it.”

And poor Robyn! She was mortified as she went over to apologize to her other guests for the ugly and loud scene that was unfolding on the other side of the room.  She was worried the melee would turn off potential buyers.  But in all honesty, it was a little difficult to muster too much sympathy for her situation.  After all, Robyn knows these women, and if she had any hope of appearing professional, she shouldn’t have had them within 100 miles of anyone she was hoping to do business with.

Robyn’s other guests assured her they were fine—after all, who doesn’t want a show with their showing—but things only went from bad to worse.  When Monique wasn’t giving Gizelle the reaction she wanted, and it didn’t look as though the confrontation was turning her and Ashley against each other, Gizelle took a different tact.  She said that Candiace told her that Monique had said that she didn’t want Ashley in her house.  Well, Monique may have said that at some point, but Ashley obviously knew it wasn’t true since Monique had invited her to her rainbow party, and the two had been hanging out quite a bit throughout the season.

Ashley didn’t even acknowledge the comment, and Monique said she didn’t care what Candiace said, or what Gizelle thought she heard.  They all knew how Gizelle was with her “fairy tales.” She added that she hadn’t talked to Candiace in a while.  They’d been taking “baby steps” since the “whole Katie thing,” referring to the blow-up they’d had at Katie’s hoedown over Candiace talking trash about Michael’s situation. It was the perfect moment for Candiace to finally make her own entrance.  Geez—it’s almost as if they plan this stuff sometimes, am I right?

As soon as Candiace sat down, Monique started in on her, asking if she’d told Gizelle that she’d said Ashley wasn’t welcome in her home.  Rather than discuss that, Candiace expertly deflected the confrontation, and she asked Monique about showing Ashley the texts they’d exchanged.  Oh boy!

To her credit, Monique copped to showing the texts to Ashley immediately, and without a trace of shame or remorse.  Gizelle said she was never texting Monique again, but Monique told her to be quiet and stay out of it because they never texted each other anyway.

Candiace wasn’t finished. She said that she didn’t even think Monique liked Ashley, and she didn’t understand how they were bff all of a sudden after everything that happened last year.  Candiace also said she didn’t threaten Monique with a bottle upside the head, as Monique had done to her.  Yes, knife-wielding Canidace went there, and Ashley was not having it! She said that maybe she hadn’t threatened Monique, but she had sure as hell threatened her, so she’d better not act like she was above such behavior.

Candiace’s response? She had the nerve to act like she didn’t know what Ashley was talking about! Of course, Ashley was happy to remind her, and Gizelle had to second it.  Then, the three women rehashed the horrible dinner party, as Karen sat looking exhausted, Gizelle grinned like the cat that swallowed the canary, and Robyn’s buyers walked out the door.

Robyn was pissed! She blamed Gizelle for all of it. Granted she’s used to Gizelle’s antics, and often even co-signs on them, but now Gizelle was messing with her money, and she was shocked that she would be so selfish.

The show faded to black from there, but the drama is just getting started.  Next week, the ladies kick off their girls’ trip to the Cayman Islands, and you know how RHOP girls’ trips go.  This one will see the ladies at each other’s throats, and it’s anybody’s guess where the battle lines will be drawn.  Stay tuned, viewers—this is about to get good!