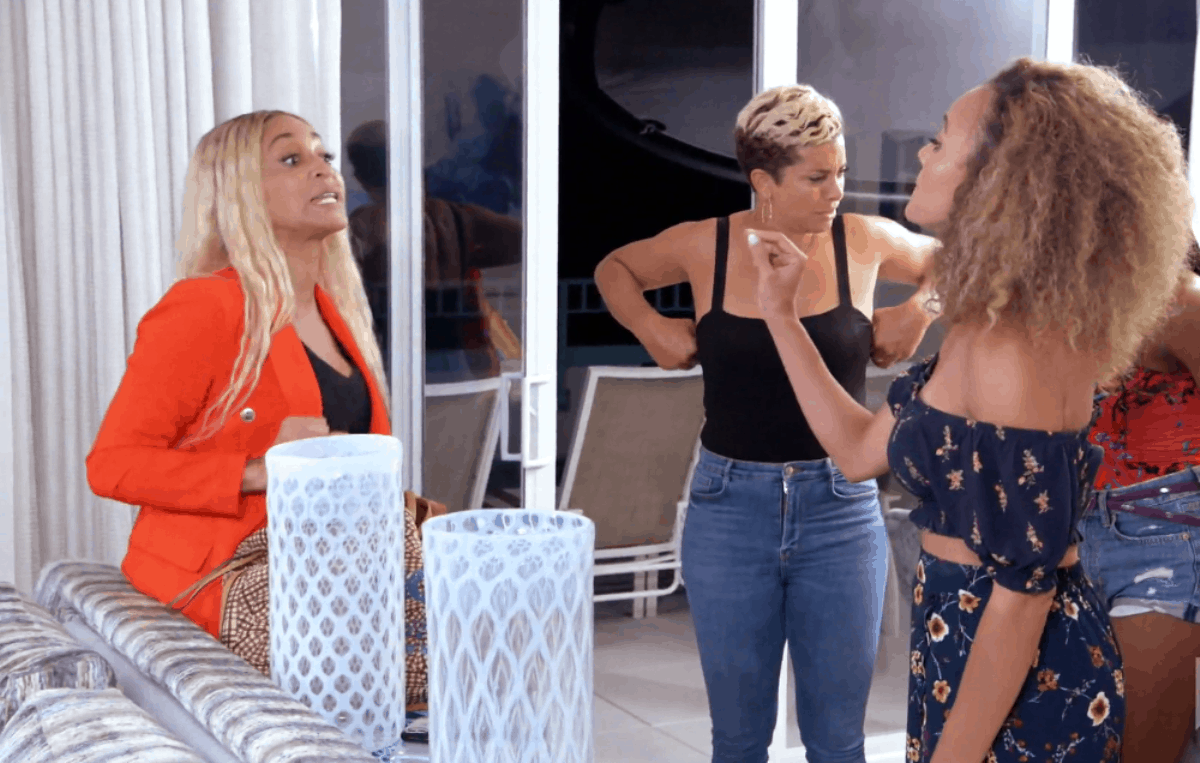 The ladies of The Real Housewives of Potomac returned last night, and they definitely brought the drama.  When we picked up with the RHOP crew, it was only day three of their girls’ trip to The Cayman Islands, and already one of the ladies had jumped ship!

Gizelle alerted the ladies that, following her blow up with Ashley, Katie was nowhere to be found.  All of her belongings were gone from her room, and she wasn’t answering Gizelle’s repeated calls or texts.  Gizelle and Robyn began searching for Katie.  Robyn eventually called her boyfriend, Jacob, and even he was clueless.  Although, if you ask me, he sounded a bit noncommittal and surprisingly unalarmed when they informed him that she was nowhere to be found.  This was despite the fact that he hadn’t heard from her since the day before, when she told him she hadn’t been feeling well.

Eventually, Robyn and Gizelle ran into a member of the production security team, who informed them that Katie was alive and well.  She was at the airport waiting for a flight back to Potomac.  The producer told them that she’d felt unwell and wanted to get back home, although it was unclear whether she meant physically or emotionally.

Once they realized that Katie was okay, the ladies decided to carry on without her and try to enjoy the rest of the trip, beginning with horseback riding in the water.  I had no idea horses could swim! Gizelle and Ashley decided early on that riding horses in the ocean wasn’t the best idea, and Karen, who had been game at the beginning, begged off after her horse became fidgety.  Her fear of being thrown off the horse’s back and into the water took over.

Later, the ladies split up.  Robyn, Karen, and Ashley went to explore the island’s crystal caves, while Gizelle and Candiace went on a submarine ride.  Everyone got along for once, and they seemed to enjoy each other’s company.

When the ladies reconvened for dinner, they called to check-in on Monique, who at 37 weeks pregnant, had been unable to make the trip.  The ladies chatted with her for a moment—except for Gizelle, who remained mum throughout the call.  Before long, Monique noticed that Katie was absent and asked after her.  The ladies told her that Katie had taken off, and Candiace quickly added that she’d taken her leave after she and Ashely had had words.  But Ashley wasn’t taking responsibility for it.  She said that Katie was “grown” and had left on her own accord.

Gizelle agreed, and after they hung up with Monique, she added that she really hadn’t appreciated the fact that Karen had also blamed Ashley for Katie’s early exit.  Furthermore, she said, if anyone was to blame, it was Karen herself.  After all, Karen had stopped by Katie’s room the night before to check on her, and she should have said something when she noticed she was wearing a big, puffy winter coat and was clearly ready to take off.  The moment nearly got ugly, but talk soon turned to lighter matters.  Karen demonstrated for the ladies how she “controlled” her man’s kiss.  It was a little gross, and it involved way more of Karen’s tongue than I wanted to see, but at least they weren’t fighting.

But it was a full moon in the Cayman Islands, and the drinks were flowing, and so as the ladies made their way back to the hotel, trouble soon followed.  Ashley mentioned how much fun she’d had with Karen that day, and Karen, apropos of absolutely nothing, chose that moment to bring up the Michael incident.  She said she “needed” for Michael to be “vindicated,” and that “dismissal was not vindication.”  The two ladies began squabbling loudly (again) in the lobby.  Then, Robyn managed to herd them up to the privacy of her and Ashley’s suite, where they continued to argue.

Ashley told Karen that she was “sideways,” “unreasonable,” and that it was no wonder she had “no friends.”  Karen told Ashley that her concern was for her.   She said Michael’s actions weren’t a reflection on Ashey, but that at the same time, Michael had “admitted to contact,” and that “contact without consent along the way was questionable.”

When Ashley looked wide-eyed and incredulous, Candiace piped up to clarify.  She said that during the interview Michael and Ashley had given to Fox 5, Michael had, indeed, said there was contact.  The cameraman had said, “don’t do that,” which he wouldn’t have said if Michael’s story about bumping into the cameraman accidentally had been true.  Good point.

Karen ended by saying that there were still “lingering questions” about Michael’s innocence.  Ashley, utterly flabbergasted at this point, said, “how dare you,” and began to move toward Karen pretty aggressively.  Candiace quickly stepped in front of Ashley, blocking her path, and Gizelle quickly ushered Karen out of the room before things could take an even uglier turn.

The following morning, Gizelle joined Karen for breakfast.  She told Karen that while she had made many valid points throughout the argument, she needed to apologize for her “delivery,” which, after such a positive day, had a “na na na na boo boo” quality to them.

A little later, Karen and Ashley met on the beach to talk, and Karen said, again, that she was “team Ashley.” Karen said that she’d never meant to hurt her, but she added that she didn’t feel that they could move on in an honest way without her saying her piece about Michael.  Ashley was a little dubious about Karen’s ‘concern,’ considering that Karen hadn’t reached out to her directly the way Ashley had reached out to her when she’d been going through a bad time.  In the end, though, Karen did apologize, and the two women agreed to move on.

The last excursion of the trip was a sunset cruise filled with selfies and toasts to the host, Robyn, who jumped off the boat and into the dark, choppy water, despite the captain’s warnings that there “could be” sharks.

Luckily she survived, and once the ladies were on dry land, Ashley decided it was time to take a pregnancy test.  She’d said earlier that she’d been having some pretty tell-tale symptoms. The show faded to black before we could see the results, but next week’s season finale showed Ashley having a sonogram! Stay tuned…